As of 2017, lung cancer was the leading cause of cancer-related deaths in Americans, with non-small-cell lung cancer (NSCLC) making up the majority of cases.1 Despite dozens of ap­proved treatments for lung cancer, survival rates for advanced cases remain poor. One study found only one-third of Stage IV patients in a particular cohort remained alive and progression-free after 12 months of treatment.2 Overall, fewer than 5% of Stage IV patients survive for 5 years, despite intensive treatment with chemotherapy.3 Immunotherapy combination treatments can increase progression-free survival by up to 4 months.4

Effective lung cancer treatment faces two challenges. The first is the toxicity and/or side effects associated with systemic admin­istration. Most lung cancer treatments are administered systemi­cally, whether by injection, intravenous infusion, or the oral route. For example, chemotherapy-based treatments and large-mole­cule biologics for immunotherapy are administered by intra­venous infusions and can be poorly tolerated by patients. The blood drug levels required for adequate lung tissue exposure are high enough that adverse effects are common.3,5 Many approved anticancer compounds are highly potent, but are rarely used due to severe toxicity. A second challenge to effective lung cancer treatment is the method of administration. Treatment by intra­venous infusion must occur in a clinical setting, leading to high costs and challenges in patient compliance. For lung cancer, local delivery may provide a solution.

Site-specific (ie, local) treatment of lung cancer using an in­haled formulation offers an ideal means to overcome both of these challenges. The disadvantages of systemic administration can be overcome through local delivery using such well-estab­lished devices as dry-powder inhalers (DPIs), metered-dose in­halers, or nebulizers. There is a long history of treating lung ailments by such devices. DPIs are often preferred, due to their ease of use and product stability at ambient conditions. Issues with treatment convenience and compliance are also overcome with these devices, as patients can self-administer therapeutics at home. This is especially advantageous because lung cancer ther­apeutics, particularly immunotherapies, are often administered indefinitely as maintenance treatments.

The following describes the formulation and manufacturing considerations for development of dry-powder therapeutics for local treatment of lung cancer. Two case studies are presented in which two approved drugs — 5-azacytidine (5AZA) and topote­can — are successfully formulated for DPI administration to the lung.

Particles that are too large (those with aerodynamic diameters larger than about 5 microns) tend to get stuck at the back of the throat, failing to follow inhaled air around the 90-degree bend in the throat from mouth to trachea. Particles that are too small (below about 1 micron) fail to deposit in the lung and are exhaled out of the body. For optimum deposition of drug in the deep lung (that is, bronchioles and alveoli), aerosol particles with aerody­namic diameters of 1 to 5 microns are de­sired.6

In liquid-based delivery systems (neb­ulizer formulations), droplet size is con­trolled by an atomizer and compressed air. For solid-based delivery systems (formula­tions for DPIs), particle engineering is needed to achieve the target size distribu­tion for pulmonary delivery. Micronization, often performed using a jet mill, can re­duce the particle size of the active phar­maceutical ingredient (API) to the correct range. The API particles are then blended with a carrier, such as lactose, to prevent reaggregation of the micronized material.

Spray drying offers another flexible approach to create dry-powder particles with the correct size for inhalation. In this process, API and excipients are co-dis­solved in a solvent and atomized into droplets, which are introduced into a dry­ing chamber. Contact with hot drying gas rapidly removes solvent from the droplets, creating solid particles. The spray-dried dispersion (SDD) particles are separated from the outlet gas stream using a cyclone collector. By carefully tuning the droplet at­omization and drying process parameters, an inhalation-ready powder can be manufactured. Some common spray-drying in­halation excipients include stabilizing sug­ars, such as trehalose, mannitol, and lactose, as well as the amino acid L-leucine. L-leucine is used in inhalation for­mulations to form a crystalline shell on the outside of particles, acting as a dispersant to improve aerosol performance.6 Further, we describe the successful use of spray-drying to prepare formulations for inhaled delivery.

The first case study describes the preparation of a dry-powder 5AZA SDD for local inhaled delivery to the lung. The pharmacokinetic performance and effi­cacy of the SDD is compared to those of an inhaled aqueous formulation and an injectable systemic formulation.

5AZA is a chemotherapeutic that helps reduce the growth of cancer cells by inhibiting DNA methylation, a critical process in cell replication. The drug is cur­rently approved for treatment via injection for myelodysplastic syndromes and leukemia and is in clinical trials for treat­ment of other cancers. When administered systemically, dose-limiting toxicity is often observed, which limits the compound’s ef­fectiveness. 5AZA is an excellent candidate for local delivery to the lung because pul­monary delivery will reduce toxicity and minimize the effects of 5AZA on the DNA of healthy tissue.

Spray drying was used to produce dry-powder SDD particles that contained 10% 5AZA, 70% trehalose, and 20% L-leucine by weight. X-ray diffraction showed that the L-leucine was crystalline, and thermal analysis showed a single amorphous trehalose/5AZA phase. The mass median aerodynamic diameter (MMAD) of the 5AZA SDD was measured with a Next Generation ImpactorTM (NGI) and a Plas­tiape low-resistance DPI device. The meas­ured value of 3.6 +/– 1.6 microns was within the target range for delivery to the deep lung.

Manufacturing Approach
The greatest challenge in developing a 5AZA SDD was the poor chemical sta­bility of 5AZA in water. 5AZA is easily dis­solved in dimethyl sulfoxide (DMSO), but trehalose and L-leucine are not adequately soluble in DMSO for a single-solvent ap­proach to be feasible. To combat this issue, a “solvent-shift” spray-drying process was used, in which an aqueous solution of trehalose and L-leucine was prepared and then combined with the 5AZA-DMSO solution using an in-line mixer just before atomization in the spray-drying process. This process limited expo­sure of the 5AZA to water to just a few seconds, preventing 5AZA degradation during manufacturing. This approach pro­duced SDD powder with good aerosol properties, as well as adequate chemical and physical stability.

Pharmacokinetic Study
A pharmacokinetic study was con­ducted in rats to evaluate the levels of 5AZA in lung tissue for three administra­tion routes: (1) systemic by intraperitoneal (IP) injection, (2) inhaled aqueous formu­lation, and (3) inhaled dry-powder SDD (Figure 1).5 The dry powder was aerosolized using a rotating brush gener­ator and presented to the rats for inhala­tion through the nose. Both inhaled formulations increased the area under the curve (AUC) in lung tissue 14- to 15-fold compared to the AUC of the systemic for­mulation that was injected. When normal­ized for the reduced dose of the inhalation treatments, the AUC was 50-fold higher than that of the systemic formulation. This study demonstrated that local administra­tion to the lung is an effective way to in­crease 5AZA levels in affected tissue, while avoiding large increases in systemic expo­sure. 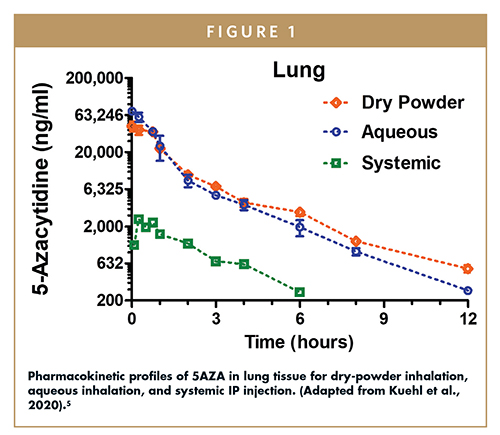 Efficacy Study
An efficacy study was conducted in an orthotopic nude rat model for NSCLC to assess the impact of 5AZA on tumor bur­den.5 Briefly, NSCLC cells were instilled in­tratracheally into the lungs of rats. Twelve cohorts were tested: control (air only), aqueous inhaled 5AZA, and dry-powder inhaled 5AZA were each administered to rats with one of four tumor cell lines. In all four cell lines, the two inhaled formula­tions reduced tumor burden significantly more than the control (Figure 2). The dry-powder formulation was found to be most effective in three cell lines, and equally ef­fective in the fourth. 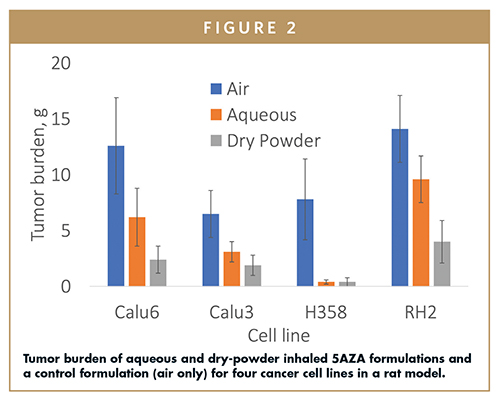 To confirm the mechanism of tumor burden reduction, the number of genes demethylated during treatment was quan­tified using RNA-sequencing analysis. The dry-powder formulation was found to be superior at transcriptional reprogramming of the genome, compared with the aque­ous formulation. The dry-powder formula­tion delivered high levels of 5AZA to the lung, demethylating the DNA in diseased tissue and thereby reducing tumor burden in the rat model.

The second case study describes the preparation of a dry-powder topotecan SDD for local inhaled delivery to the lung. Again, the pharmacokinetic performance and efficacy of the SDD was compared to that of an inhaled aqueous formulation and an injected systemic formulation.

The chemotherapeutic agent topote­can is a topoisomerase-I inhibitor used to treat a range of cancers. It was approved for use as an intravenous (IV) infusion in 1996 and as an oral formulation in 2007. Although it is effective at treating lung can­cer, its use is complicated by severe hema­tological toxicity, which can limit dosing in some patients. Topotecan is an excellent candidate for local delivery to the lung be­cause pulmonary delivery will maximize exposure of lung tissues and minimize sys­temic exposure to reduce toxicity.

Formulation & In Vitro Characterization
Spray drying was used to produce dry-powder topotecan SDD particles that contained 10% topotecan, 70% trehalose, and 20% L-leucine by weight. As topote­can has good solubility in a pH 3.5 aque­ous solution, the SDD was manufactured by a standard, single-solvent process. The aerosol properties of the SDD were meas­ured by NGI, showing an MMAD of 2.9 +/– 1.9 microns and a fine particle frac­tion (FPF) of 62% (% of emitted dose with aerodynamic diameter less than 5 mi­crons). These results indicated a highly res­pirable dry powder with suitable characteristics for delivery in the deep lung.

Pharmacokinetic Study
A pharmacokinetic study compared lung tissue and plasma levels for two doses of the inhaled dry-powder topotecan SDD formulation (0.79 and 0.4 mg/kg) and systemic (injected) topotecan (at 0.7 mg/kg).3 Pharmacokinetic curves for lung tissue and plasma are shown in Figure 3. In lung tissue (Figure 3A), the levels of topotecan were much higher for the two inhaled doses than for the injected sys­temic formulation. The dose-normalized AUC levels in the lung were 895 hr*kg*ng/mL*mg for the injected systemic formulation, and 34,092 and 27,647 hr*kg*ng/mL*mg for the low-dose the high-dose inhaled dry-powder formula­tion, respectively. Despite the high expo­sure in the lung tissue, plasma levels remained fairly low for both doses of in­haled topotecan (Figure 3B). The study confirms that a dry powder formulation can be used to deliver high levels of topotecan to the lung while maintaining low systemic exposure. 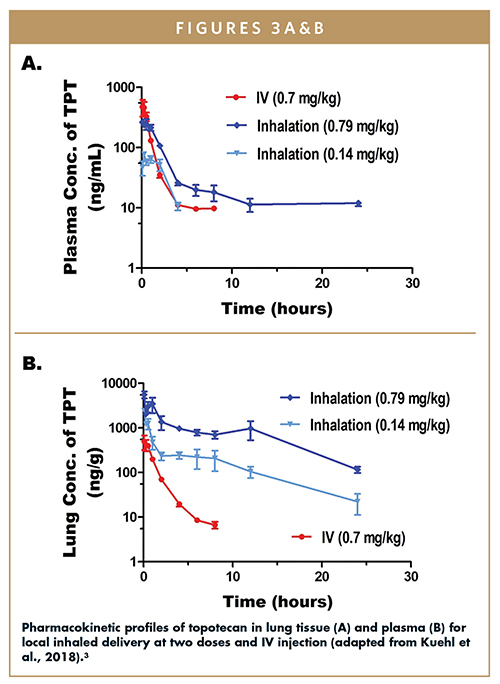 Efficacy Study
An orthotopic nude rat study was de­signed to compare the efficacy of inhaled and injected topotecan at reducing the burden of tumors grown from two human adenocarcinoma cell lines: (a) H1975, an aggressive and fast-growing cell line, and (b) A549, a moderate-growth cell line.3 After 25 days of tumor growth, rats were dosed weekly with either 1 mg/kg or 2 mg/kg of an inhaled dry-powder topote­can formulation, 2 mg/kg injected topote­can (systemic), or air only (as a control). Two results from the study are highlighted here. In the H1975 cohort, an aggressive and fast-growing cell line, rats who re­ceived the inhaled dry-powder formulation survived substantially longer than those who received the injected systemic or con­trol treatment (Figure 4A). In the moder­ately-growing A549 tumor cohort, significantly improved tumor burden was observed for the rats who received the inhaled dry-powder formulation (Figure 4B). Taken together, these results demonstrate the promising impact of local administra­tion of topotecan for treatment of lung cancer. 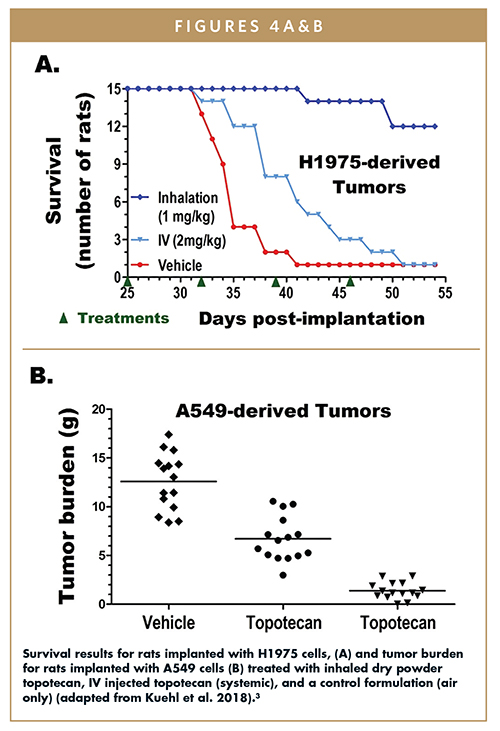 These case studies demonstrate the potential of local lung cancer treatment to improve efficacy, reduce dose, lessen risk of systemic side effects, and improve pa­tient compliance by providing a convenient dosage form. Specifically, the pharmaco­kinetic studies demonstrate how greatly improved exposure to lung tissue can be achieved by the inhalation route. Efficacy studies show the impact of this improved exposure on tumor reduction with human lung cancer cell lines. The formulations of 5AZA and topotecan could lead to new options for treating local and metastatic lung cancer, for adjuvant therapy and, when combined with immunotherapy, im­prove patient survival. 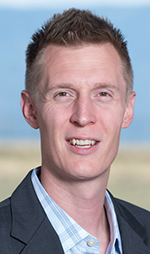 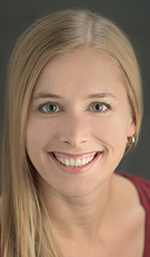