FORMULATION DEVELOPMENT – A Call for Collaboration to Meet the Bioavailability Challenge

Drug Development Executive: Marshall Crew, President & CEO of Agere, discusses how the company is taking a different approach that leverages expertise, but relies heavily on the principles of physical chemistry to enable automation.

EXCIPIENT UPDATE – Addressing Challenges With Low-Solubility Compounds: The Importance of Functional Excipients in the Formulation of Amorphous Dispersions

Rod Ray, PhD, explains that because more than half of the compounds in early development are considered poorly soluble, improving oral bioavailability represents a significant challenge to the pharmaceutical industry.

Robert Gwozdz, MPharm, presents an overview of polymers used in the more exotic and technically challenging dosage forms involving MR as well as those used for enhancing the dissolution and bioavailability of poorly soluble APIs.

Roquette recently announced its complete acquisition of India-based excipient manufacturer, Crest Cellulose. Following its purchase of a majority share in the company in 2018, this latest move….

Evonik is building a new cGMP facility to manufacture lipids for clinical development and launch of innovative medicines. The new cGMP lipid launch facility is located in….

Roquette recently announced the addition of a new grade to its PEARLITOL SD mannitol range for direct compression – PEARLITOL 150 SD. Developed specifically for….

DFE Pharma recently announced the expansion of its Dry Powder Inhalation (DPI) portfolio with the launch of Lactohale 400. The addition of Lactohale 400 further enhances the completeness of DFE Pharma’s portfolio of inhalation-grade lactose…..

As the advantages of transdermal drug delivery grow, the global market for transdermal patches also is growing. Join DuPont™ Liveo™ Healthcare Solutions and Gattefossé Pharmaceuticals for a complimentary one-hour webinar to explore the current….

This LIVE event has already taken place CLICK HERE to access the recorded version of this event and receive a copy of the presentation. Join… 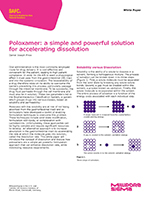 In this study, the authors monitor acetylsalicylic acid (ASA) hydrolysis in different formulations using UPLC and TAM with the objective of comparing these methods for agreement, speed, and efficiency in predicting drug stability. In parallel, they assess the impact of the excipient choices on the stability of the ASA.

What are functional excipients?

This is particularly true for novel excipients, which do have technical, therapeutic, and commercial benefits in oral drug delivery. Despite their formulation-enhancing benefits, novel excipients are sacrificed early in development because of a lack of prece­dence of use.

Without an independent path­way to allow new excipients or new uses for existing excipients into drug products, except when associated with a drug filing, there are limited tools available for pharmaceutical compa­nies to formulate better performing, and in many cases, life-saving drugs. Meanwhile, drug manufacturers are reluctant to use new excipients and take on the additional layer of scrutiny from regulatory agencies to demonstrate full excipient characterization, safety, quality, func­tion, and appropriateness of use.

Functional Excipients and the FDA

The Food & Drug Administration (FDA) has acknowledged that the lack of novel excipients is indeed a prob­lem. In September 2021, the Agency announced the Novel Excipient Review Pilot Program, which will select and re­view four novel excipients in the next two years using a new pathway. This will allow manufacturers to obtain an FDA review prior to the use of the novel excipient in a drug formulation.

The FDA’s recent stance and accept­ance that the novel excipients are crit­ical in development of new drug candidates, the perceptions around the novel excipients are being changed as the Agency continues to embrace the facts that the pharma in­dustry is in dire need of new excipients for bringing the innovative drugs to the market faster. This is the first time in history that the agency is opening doors for novel ex­cipients to be freely evaluated and used in the innovative formulations for NCEs.

Note, though, that this is not an excipient approval process; the novel excipient would still be evaluated as part of the overall drug product ap­proval. In the next 3 to 5 years, we can expect to see an accel­eration in the examination of the com­position and purity of excipients.