Formulators across the pharma landscape are all too familiar with the challenge of low aqueous solubility, which severely limits the oral bioavailability and commercial viability of new drugs. As a consequence, many products that could potentially improve patients’ lives never reach pharmacy shelves. In fact, poor solubility has caused 40% of state-of-the-art products to fall short when attempting to enter the market.1

About 70% of active pharmaceutical ingredients (APIs) present a solubility issue of some kind, which limits a manufacturer’s pipeline of drug candidates.2 A concerning amount of life-saving treatments will remain just out of reach unless low solubility is addressed. But these troubling APIs don’t have to remain obstacles to securing patient safety, product efficacy, low toxicity, and metabolic clearance.

Excipients have made a significant impact on the bioavailability of dosage forms, especially when it comes to solubility. Drug manufacturers looking to buck the trend of poor solubility should seek out supplier partners that can offer a one-stop-shop for modified-release technologies — versatile solutions that can be plugged into a wide range of formulations.

A variety of chemical and physical modifications have been introduced to innovate the way drug products are produced, enhancing solubility and dissolution along the way. Some of the more common methods are amorphous solid dispersions (ASDs), complex formation and nano-suspensions. ASDs can be used in a polymeric carrier to increase an API’s solubility. This combination also bolsters the ASD in question with high-solids loading, and when in contact with intestinal fluids, the API is effectively stabilized against precipitation or re-crystallization.

As formulators seek to produce drugs with low aqueous solubility, they are simultaneously discovering new, unique approaches in development. For a case in point, look no further than DuPont Nutrition & Biosciences (DuPont) — the company found a way to increase the solubility and bioavailability of APIs through the use of AFFINISOLTM HPMC HME, an excipient specially designed for hot melt extrusion (HME), which factors heavily in successful solubilization. According to a recent case study, DuPont’s proprietary form of hydroxypropyl methycellulose (HPMC) proved ideal for formulating immediate-release tablets for a poorly soluble drug.

DETERMINING THE PROCESS OF PRODUCTION

Before embarking on the study, DuPont researchers evaluated their preferred process of production. Though they concluded that HME was the ideal method, the answer wasn’t immediately clear. The team evaluated spray dried dispersion (SSD) first, another method of ASD manufacturing, to discover which process was most effective for solubility and bioavailability. SSD has grown in popularity because it not only improves an API’s solubility, but also prevents against nucleation of poorly soluble drugs.

SSD and HME are not created equal, however. Manufacturers should do their due diligence to make sure they align with development goals. For example, SDD is available in smaller scales, but requires solvent for both the API and the excipient; HME does not require solvents, but it is limited to pharmaceuticals that can withstand high temperatures. Nevertheless, HME is a versatile, continuous, solvent-free process that enables the formulation of APIs that often face issues during processing and delivery. HME also boasts increased solubility in ASDs without sacrificing permeability, which leads to increased bioavailability.

Though HME is poised to become a leading technology in the manufacturing of ASDs, the most compelling reason the company used HME in this study is its unique ability to disrupt the crystal lattice of the active ingredient to render it amorphous, promoting its incorporation in to the polymeric carrier to yield a homogenous dispersion (a product of the manner in which thermal and mechanical energy are input during the process). As shown in the following case study, the results are noteworthy.

The study was conducted with a mixture of APIs and polymers that were blended, milled, and combined with other excipients, then compared to the original drugs to determine the differences in solubility and API release. The team came to a preferable conclusion, with the end result showing that processing poorly soluble drugs with HPMC in HME can formulate high-dose tablets with improved solubility.

To begin the case study, the team used a mixture with a ratio of 1:1 of API and AFFINISOLTM HPMC HME 15 LV, based on previous screening trials. They then blended the API and polymer for 10 minutes, and passed the blend through a 30# mesh sieve. The blend was then fed through a Thermo Fisher Pharma 11 twin-screw extruder at 190°C to obtain extrudates. The extrudates were cut into pellets (1-2 mm) using Varicut Pelletizer, and the pellets were further milled using a Retsch Ultra-Centrifugal Mill ZM 200 to achieve extrudates with particle size of < 250 μm. The milled extrudates were further blended with various bulking agents (Avicel® PH 102, lactose and mannitol) and tablet disintegrants (PVP Cl, SSG, Ac-Di-Sol® and AmberliteTM IRP 88). The various blends were then compressed into tablets and evaluated for hardness, disintegration time, and in vitro drug release.

The tablets were compressed on an 8 Station Kambert tablet compression machine (KMP-D-8) using standard concave 12-mm round punches and evaluated for hardness, disintegration time, and in vitro drug release.

All compaction profiles of the compositions were analyzed on standard ESH compaction simulator equipment. Disintegration tests soon followed, and the study concluded with samples drawn at regular intervals from the dissolution apparatus.

Researchers also evaluated the effects of bulking agents and disintegrants on drug performance over the course of the study. The following is the methodology and results of this evaluation.

As shown in Figure 1, researchers saw an absence of drug peak in thermogram readings, which indicated a strong interaction between the AFFINISOLTM HPMC HME 15 LV and a given API, resulting in amorphous solid dispersion. 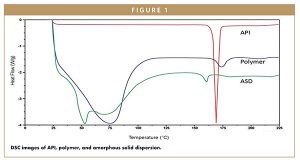 Tablets formulated with Avicel® PH 102 as a bulking agent showed excellent hardness (70 N) compared to those formulated with mannitol or lactose, which both achieved a hardness of 32 N. Typically, a minimum hardness of 60 N is acceptable criteria, putting DuPont’s results well above expected performance.

Figure 2 shows that tablets formulated with mannitol as a bulking agent resulted in a faster disintegration time of 480 seconds, as compared to tablets containing Avicel® PH 102 or lactose as bulking agents. For the in-vitro dissolution studies, researchers used the USP apparatus 2 from Electrolab in 900 ml of 0.1N HCl for 2 hours at 100 rpm. A 5-ml sample was withdrawn at each sampling time point (15, 30, 45, 60, 90, and 120 minutes). 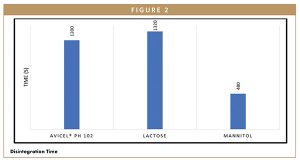 According to Figure 3, the API release of tablets formulated with Avicel® PH 102 was slower than mannitol. API release with lactose as a bulking agent was extremely slow and incomplete. 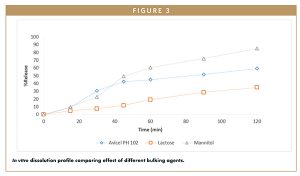 Avicel®, with its unique crystalline and paracrystalline microfiber structure, provides the best compactibility in tabletting, while formulations containing mannitol or lactose were lacking. Moreover, the hydrogen bonding available on the surface of cellulose particles further increases the strength of tablets. 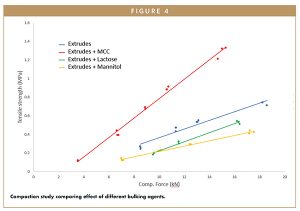 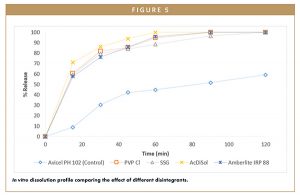 The study shows that high-dose (200 mg) tablet formulation of a poorly water-soluble drug was developed with excellent tablet properties and API release by processing with AFFINISOLTM HPMC HME 15 LV using HME technology. The results show that AFFINISOLTM HPMC HME 15 LV can help in formulating an ASD into immediate-release tablets of a poorly soluble drug.

DuPont’s case study shows that previously unviable APIs can be successfully processed with the right methods, which should give hope to formulators facing similar difficulties. Through the use of bulking agents and tablet disintegrants, researchers created formulations with improved physical-tablet and drug-release properties, all of which can benefit the pharma industry.

It all comes down to HPMC’s unique ability to inhibit recrystallization and increase bioavailability when used as a polymeric stabilizer in ASDs. As shown throughout the study, DuPont’s proprietary form of the excipient was successfully processed in a wide range of conditions into ASDs, resulting in formulations that provide increased solubility of model compounds.

To put it plainly, poorly water-soluble drugs are no longer exempt from high-dose tablet formulations. Excellent tablet properties and API release are both possible by processing with AFFINISOLTM HPMC HME 15 LV in conjunction with HME technology. For an industry in which so many promising drugs have stalled out in reaching the market because of poor solubility, DuPont’s success with AFFINSIOLTM HPMC HME represents a new paradigm for formulators. No longer do limitations in delivery method mean the difference between getting life-changing drugs on the shelf and going back to the drawing board.

These results suggest that one day soon, almost any drug will be able to hit the market without delay, regardless of solubility. But drug makers looking to implement similar tactics should use caution. The global supply chain for pharmaceuticals can be a complex gauntlet of regulations and risk assessment protocols, all of which vary by region. For a drug manufacturer that spans across borders, developers need to navigate regulations and risk assessments for new delivery methods. More and more regulatory agencies are working to standardize guidelines globally to easily manage raw material and supplier qualifications. In the meantime, close collaboration between raw material supplier and manufacturer is imperative to ensure regulatory standards are held at each phase.

Quality-by-Design (QbD) is key to a thriving pharmaceutical business, so make sure any potential manufacturing partner can adhere to it. By understanding and addressing different components of a product at the beginning of the process — from its formulation process, to manufacturing and quality control — future risk can be mitigated and cost savings achieved. A QbD approach allows manufacturers to evaluate how their product will move through every step in the supply chain to better understand the entire system in product creation. In the end, this structure allows manufacturers to minimize costs by limiting the time and complexities through improving processes, testing, and inventory costs and can even help address regulatory needs. 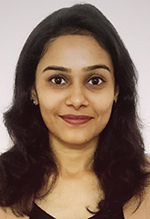 Gayatri Khanvilkar is an Application Development & Innovation Scientist at DuPont Nutrition & Biosciences focusing her career on pharmaceutics, Good Laboratory Practice (GLP), JMP, R&D, and regulatory affairs. She earned her Master’s in Pharmacy, with a focus in Pharmacology, from Bombay College of Pharmacy. Prior to that, she earned her Bachelor’s from Mumbai University. 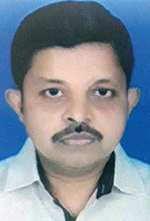 Ajit Bhagat is a Senior Technician at DuPont Nutrition & Biosciences based in Maharashtra, India. 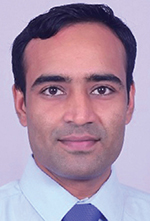 Dr. Sangmesh Torne is the Application Development & Innovation Scientist at DuPont. Throughout his career in the pharmaceutical industry, he has focused on complete drug product development processes and management. He earned his PhD from Vellore Institute of Technology, his Master’s in Pharmacy from Swami Ramanand Teerth Marathwada University, and his Bachelor’s in Pharmacy from Nanded Pharmacy College. 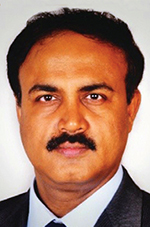 Dr. Tejas Gunjikar is the Pharma Application and Innovation Leader for South Asia at DuPont, where he helps develop oral fast-dissolving technologies, biopharmaceutical formulations, solid oral dosage forms, and much more. He earned his PhD in Pharmaceutics from University of Mumbai and his Bachelor’s in Pharmacy from Savitribai Phule Pune University. 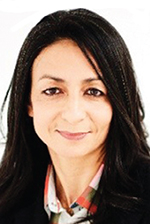