With the 30-year anniversary of the first product approval using PEG (polyethylene oxide polymer) conjugation, Enzon’s Adagen (pegadamase), it seems an appropriate occasion to review the evolution of the technology (PEGylation) and subsequent product approvals. PEGylation refers to the conjugation of PEG to biologically active molecules with the objective of enhancing the therapeutic performance of these molecules. The more important benefits of PEGylation are to extend drug half-life and reduce host immune responses. This latter benefit was critical for the development of the first two approved PEGylated products, Enzon’s Adagen, a bovine-derived adenosine deaminase for the treatment of severe combined immune-compromised deficiency (SCID), and Oncaspar, E. coli-derived asparaginase, for the treatment of pediatric acute lymphoblastic leukemia (ALL).

Adagen and Oncaspar, both non-human enzymes, depend on PEGylation to reduce the immune response that limits their therapeutic usefulness. They use a PEGylation strategy that involves the non-specific attachment of multiple, relatively small, 5-kDa PEG molecules. This non-specific attachment strategy, under the proper experimental conditions, does not significantly disrupt the active site of the enzyme but does suppress the undesired immune response.

In contrast, the next PEGylated products to be approved, PegIntron and Pegasys, depend primarily on PEGylation to extend the circulating half-life of the parent proteins, interferons for the treatment of Hepatitis C. In addition to extending the dosing frequency from three times weekly to once weekly, both PEGylated products have demonstrated improved efficacy and tolerability in comparison with the unPEGylated proteins. These products are notable because they were the first approved products using a strategy of a limited number of larger PEG molecules attached in a relatively specific manner. This approach retains the activity of the cytokines while extending their circulating half-life. PegIntron and Pegasys use somewhat different strategies in terms of PEG polymer size and geometry. Schering-Plough’s PegIntron, using Enzon- developed technology, attaches a single 12-kDa linear succinimidyl carbonate PEG (SC-PEG) to amino groups, with as many as 14 different positional isomers. Roche’s Pegasys, developed with Shearwater technology, features a single 40- kDa branched SCPEG linked to amino groups with four positional isomers. Approval of the two competing products resulted in patent challenges that were resolved with a cross license of intellectual property between Shearwater, Inhale Therapeutics at the time, and Enzon.1 Excellent discussions of these and other PEGylation strategies are provided in several review articles.2-4

These two approaches, multiple non-specific small PEGs as used with Adagen and Oncaspar, and a very limited number of larger more specific PEGs used with PegIntron and Pegasys, accompanied by subsequent improvements in linker chemistries, provided the foundational strategies for the products that followed. A summary of key approved products is presented in Table 1. 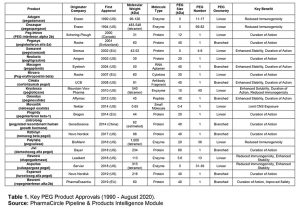 Amgen’s Neulasta (pegfilgrastim), a recombinant human granulocyte colony-stimulating factor (GCSF) analog for the treatment of neutropenia, involves the attachment of a single linear 20-kDa PEG to the N-terminus position of the glycoprotein using a novel aldehyde alkylation strategy.

Eyetech’s (Bausch) Macugen (pegaptanib), an anti-angiogenic oligonucleotide for the treatment of neovascular (wet) agerelated macular degeneration (AMD), represents the only approval to date of a PEGylated aptamer. PEGylation involves attachment of a single branched 40 kDa to an amine at the 5’ end of the aptamer. PEGylation provides the necessary protection from serum nucleases to extend the half-life of this sensitive molecule.

UCB’s Cimzia (certolizumab pegol), a tumor necrosis factor alpha for the treatment of a variety arthritic-related conditions, represents the first, and to date, only use of PEGylation to extend the duration of action of an antibody fragment. The product features an engineered thiol that permits selective attachment of a 40kDa branched PEG.

Affymax’s Omontys (peginesatide), a functional analog of erythropoietin for the treatment of anemia, is still the only peptide to be approved using PEGylation. Omontys used a unique 40-kDa branched PEG linker to connect the two separate peptides of the dimer.2 The product was recalled from the market in 2013, within a year of approval, because of hypersensitivity issues, and formally withdrawn in 2019.

Nektar’s Movantik (naloxegol oxalate), an opioid antagonist for the treatment of opioid-induced constipation, represents the only approved PEGylated small molecule. The therapeutic strategy of using the PEG, in this case a 400-Da (7-mer), is to increase the hydrodynamic size of the molecule, limiting passage across the Blood Brain Barrier, while still antagonizing opioid binding in peripheral tissue. The PEG is connected through an ether linkage to the 6-a-hydroxyl.

Two recently approved products, Leadiant’s (Sigma-Tau) Revcovi (elapegademase) and Servier’s Asparlas (Calaspargase pegol) are notable in that they represent “redos” of the first two approved PEGylated products, Adagen and Oncaspar, respectively. A quick look at Table 1 reveals that they basically use the same PEGylation approaches with the same therapeutic objectives as their precursors; non-specific PEGylation with 5-kDa PEG. The difference is the PEG linker used. The two earlier products both used SSPEG, succinimidyl succinate PEG, which produced an ester linkage between the PEG conjugate and enzyme that was sensitive to hydrolysis. In contrast, Revcovi and Asparlas both use SC-PEG reagents, succinimidyl carbonate PEG, that produce a more stable connection without the ester linkage. In the case of Asparlas, this has also resulted in a longer duration of action.4

While not a “redo” as such, PharmaEssentia’s Besremi (ropeginterferon alfa-2b) combines interferon alpha 2b, the native protein in Schering-Plough’s PegIntron, with the PEGylation strategy of Roche’s Pegasys, a 40-kDa branched PEG. Approved by the EMA in 2018, the product is indicated for the treatment of Polycythemia Vera rather than the original Hepatitis C indications of PegIntron and Pegasys.

A number of PEGylated products did not make it through to approval, a few of them using a novel chemical or therapeutic strategy that are worth understanding.

In the early 2000s, Enzon undertook the development of a pair of PEGylated small molecule antineoplastic drugs using releasable linkers. The concept was that these molecules, chemotherapeutics linked to either end of a bifunctional PEG molecule, would be preferentially taken up by tumor cells and, when released in the tumor, exert selective cytotoxicity. These larger molecules would also be less subject to kidney filtering and excretion, extending duration of action. The results with both camptothecin (Pegamotecan) and paclitaxel (Peg-Paclitaxel), which went as far as Phase 2 trials, were unconvincing. Beyond the failure to provide any type of clinical benefit, there were formulation concerns as these products used 40-kDa bifunctional PEGs. This resulted in very large molecules that carried only two actives but increased the overall product mass about 50-fold. This suggested a very large dosage form that might have led to issues related to the accumulation of these 40-kDa-released PEGs. The development of these products was quietly discontinued. Since then, the suggestion has been made that this strategy might be feasible with the use of multi-arm PEG molecules.

An interesting small molecule PEGylation strategy that was terminated for business rather than clinical reasons was Nektar’s Kyvoda (oxycodegol), an opioid analgesic with designed abuse-deterrent properties. The product was a 6-mer PEG molecule conjugated through an ether linkage to the 6-a-hydroxyl of a reduced analog of oxycodone. The addition of the PEG was intended to slow, but not prevent, the central uptake of the analgesic and limit its abuse potential. While the product was shown effective and safe in clinical trials, it was rejected by an FDA advisory committee at a time when all opioids, regardless of abuse-deterrent potential, were under very close scrutiny. Nektar chose to withdraw the product’s application with the FDA rather than continuing to advance into regulatory headwinds.

A review of the PharmaCircle Pipeline & Products Intelligence module reveals a total of 49 PEGylated products at some stage of registration or clinical development. This includes three products filed for approval, 12 in Phase 3, 20 in Phase 2, and 14 in Phase 1. It would be an understatement to say the pipeline is robust. These products represent both innovative products and biosimilars. Among this four dozen or so products are two that embody interesting PEGylation or therapeutic strategies.

ACP-001 (lonapegsomatropin), currently in registration in the US, uses Ascendis Pharma’s TransCon technology to Growth Hormone (hGH) and release the fully active native hGH. The effect is an extended circulating half-life that permits dosing once per week versus the usual once a day for hGH.

Molecular Partners’ and Allergan’s (AbbVie) DARPin (abicipar pegol) is an anti-VEGF protein filed for approval with the FDA for the treatment of neovascular (wet) age-related macular degeneration. It is a 34-kDa molecule composed of a 14-kDa recombinant protein and a 20-kDa PEG. Intended for administration intravitreally every 2 to 3 months, the product recently received a Complete Response Letter from the FDA related to safety issues.

There was a point some 20 years ago that the supply of monodispersed PEG reagents was severely constrained as a result of patents, restrictive licensing supply agreements, and a single supplier of the unactivated PEG polymers. A cross license between Enzon and Nektar largely resolved the patent issues for each company’s clients.1 With basic PEG patents expiring over the next decade, the field was opened to new competitors. The result has been further innovation and a robust pipeline of products and product approvals. A quick search of PharmaCircle’s CMO/CRO database identified no less than 31 companies offering PEG reagents in a wide variety of sizes, geometries, and activation chemistries.

WHAT’S NEXT FOR PEGYLATION?

Newer conjugation approaches promising comparable benefits are yet to deliver product approvals. Any new technology will face a difficult business environment. The economics of PEGylation started to shift in the late 1990s as Enzon’s foundational PEGylation patents were approaching their end of life and Shearwater was offering attractive technologies with more competitive pricing. There are no longer any pesky licensing fees required to use PEGylation. All that is needed is the supply of a suitable PEG reagent and the necessary know-how.

When technology becomes open source, it often leads to limited investment and innovation because there is little motivation to invest without intellectual property protection. PEGylation has flourished for the past decade as an open source technology. Will this continue or will openness actually stifle the development of next-generation PEGylation technologies? Let’s see where PEGylation is a decade from now.

Dr. Esay Okutgen is Director Drug Delivery at PharmaCircle LLC. She earned her PhD in Pharmaceutical Technology from De Montfort University, Leicester, UK, and her BSc in Pharmacy from Hacettepe University, Ankara, Turkey. Prior to joining PharmaCircle in 2006, she held Senior R&D Scientist positions at Bausch & Lomb and Phoqus Pharmaceuticals, and worked as a Research Assistant at School of Pharmacy, Rutgers University. Dr. Okutgen’s responsibilities within PharmaCircle include oversight of drug delivery technology analysis and data integrity.

Dr. Josef Bossart is Executive Editor at PharmaCircle LLC. He earned his PhD in Medicinal Chemistry from The Ohio State University College of Pharmacy. Over a 4-decade career in the pharmaceutical industry, he has been involved with PEGylated products and PEGylation technologies in a number of roles as a licensee and licensor.