THE CONTROVERSY OF MEDICAL CANNABIS

Cannabis is arguably the most controversial of known therapeutic entities. No class of compounds is associated with more controversy and stigma. While its benefits have been known for thousands of years, dating to ancient civilizations in China and Egypt; and, while it was at one point widely marketed and prescribed in traditional medical practice in the United States in the 1800s, it remains to date identified by the DEA as Controlled Substance Category 1 along with heroin: “highly addictive and of no medical use.” Nonetheless, US Patent No. 6630507 was granted in 2003 to the US Department of Health and Human Services for use of cannabinoids to treat a wide range of diseases. It claims exclusive rights for using cannabis to treat Alzheimer’s, Parkinson’s disease, stroke, and other states of oxidative stress.1

In late1890, Eli Lilly and Parke-Davis joint-ventured to breed Cannabis Americana in Greenfield, IN, as alternative to Cannabis Indica. On August 2, 1937, after the lifting of alcohol prohibition, Congress made cannabis illegal.2

In view of many documented medical benefits of cannabinoids, but with widely persisting regulations, misinformation, and stigma associated with cannabis, it was appropriate to search for a non-cannabis-derived source of cannabinoid therapy, such as found in β-Caryophyllene. 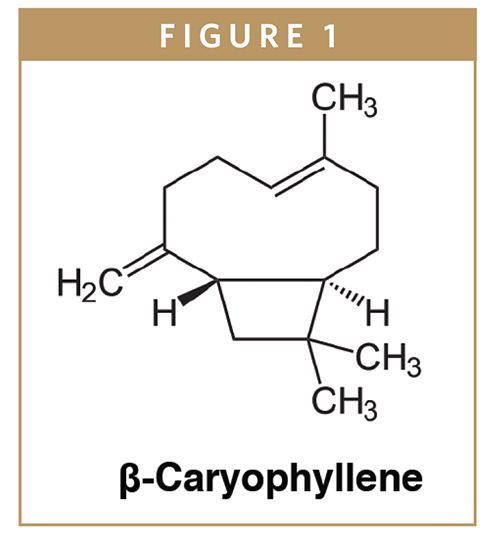 Caryophyllene is a natural constituent of many essential oils, especially those of clove, rosemary, hops, and Cannabis sativa. Caryophyllene is one of the chemicals responsible for spiciness of black pepper. It is considered a dietary cannabinoid.3

To what extent Caryophyllene modulates inflammatory and other therapeutic processes in humans via the endocannabinoid system, ECS, is not known. Caryophyllene does not bind to centrally expressed cannabinoid receptors type-1 (CB1) or exert psychoactive effects. Caryophyllene was first synthesized in1964.4

Of naturally occurring sources, West African black pepper (Piper guineense) has the highest concentration of caryophyllene in essential oil at 58%. Others are as follows:

Psychoactive cannabinoids from Cannabis sativa L. and arachidonic acid-derived endocannabinoids are non-selective natural ligands for the cannabinoid receptor type 1 (CB1) and CB2 receptors. The CB1 receptor is responsible for psycho-modulatory effects whereas activation of the CB2 receptor presents potential therapeutic strategy for treating inflammation, pain, atherosclerosis, osteoporosis, and other conditions.

Caryophyllene is therefore a cannabis-derived functional CB receptor ligand with a different structure from classical cannabinoids. It represents a different type of CB2 receptor-selective agonist. Cannabis extract (Sativex) was approved in Canada for treatment of neuropathic pain in multiple sclerosis. Caryophyllene, as major constituent with significant cannabi-mimetic effects, may be contributing to the observed therapeutic effects of cannabis preparations, including Sativex.

Jürg Gertsch and others in 2008 reported plant-derived β-caryophyllene selectively binds to CB2 receptors and is a functional CB2 agonist. They provided evidence it exerts cannabi-mimetic effects in vivo by reducing inflammatory response in wild-type mice but not in mice lacking CB2 receptors. β-caryophyllene was identified as a functional non-psychoactive CB2 receptor ligand and as an anti-inflammatory cannabinoid in cannabis.6

In addition to the wide range of CB1 receptor-mediated physiological effects on the central nervous system, CNS, different cannabinoid ligands have been reported to modulate immune responses. CB2 receptor ligands have been shown to inhibit inflammation and edema, exert analgesic effects, and have a protective role in ischemia-reperfusion injury. In the gastrointestinal tract, CB2 receptor agonists have been shown to prevent colitis by reducing inflammation. The CB2 receptor has been described as a potential target for the treatment of atherosclerosis and osteoporosis. Consequently, CB2 receptor-selective agonists, being devoid of psychoactive side effects typically associated with CB1 receptor activation, are potential drug candidates for a wide range of different disease states.7

β-caryophyllene is commonly ingested with vegetable foods, particularly black pepper. Accordingly, adequate daily intake of caryophyllene could potentially modulate inflammatory and other pathophysiological processes via the endocannabinoid system and help maintain health. The potential of β-caryophyllene in both human and animal health needs further investigation as much of the focus of cannabinoids has been on cannabis and cannabidiol, CBD. As a selective agonist of cannabinoid receptor type-2 (CB2), caryophyllene has been shown to exert significant cannabi-mimetic anti-inflammatory effects. Anti-nociceptive, neuroprotective, anxiolytic, antidepressant, and anti-alcoholism activities have also been reported in vitro and in rodent studies.8

In view of its potential therapeutic effects as a cannabinoid receptor agonist, β-Caryophyllene was studied in DIRECT EFFECTSTM Topical Therapy for treating a number of neurological and neuropsychiatric conditions. The efficacy of this unique non-systemic therapeutic modality has been well established using both traditional neuro-active pharmacological compounds, such as apomorphine, sumatriptan, tizanidine, phentermine, 4-amino pyridine, and others; as well as with the therapeutic cannabinoid cannabidiol, CBD, found in cannabis and hemp.9-12

DIRECT EFFECTS Topical Therapy describes the drug delivery technology in which compounds and drugs are applied to skin surface as a cream or gel in an appropriate epidermal-penetrating medium to activate surface receptors on cutaneous-free nerve-endings for therapeutic benefit. Binding of therapeutic agonists to their respective endogenous receptors on the cell surface of nerve-endings causes modulation of afferent neural impulses to the central nervous system (CNS), providing therapeutic effects.

Figure 2 shows the presence of surface receptors to endogenous agonists and other neuro-active compounds on cutaneous nerve-endings under the stratum corneum. Free nerve-endings are peripheral end-components of spinal dorsal root ganglia, which function as neural relay stations between the peripheral nervous system (PNS) and CNS.13 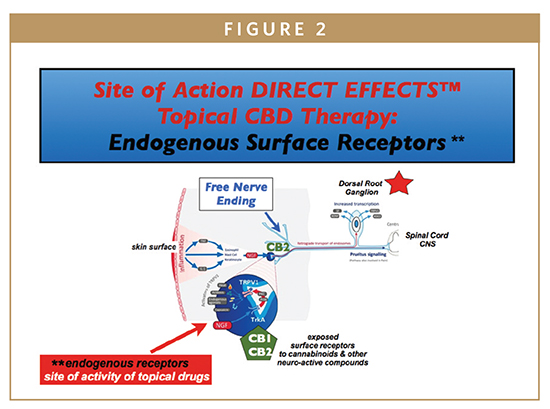 Figure 3 shows various receptors that exist on the cell surface of free nerve-endings and their respective therapeutic agonists that bind to provide therapeutic benefit. 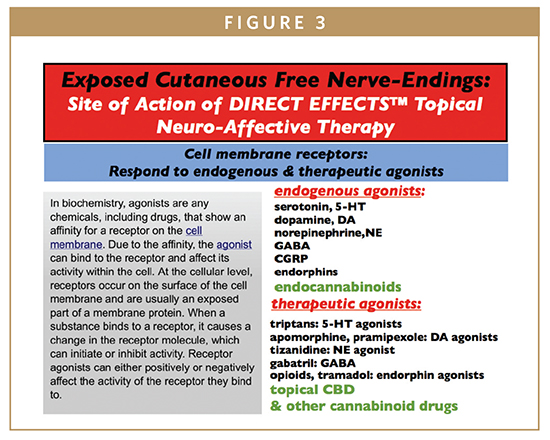 CB1 and CB2 cannabinoid receptors are present on free nerve-endings as part of the endocannabinoid system (ECS). These can be activated by topical cannabinoid therapy to provide therapeutic benefits. DIRECT EFFECTS topical CBD has shown benefit in the following conditions in a study of 88 patients in an out-patient neurology practice (Table 1). 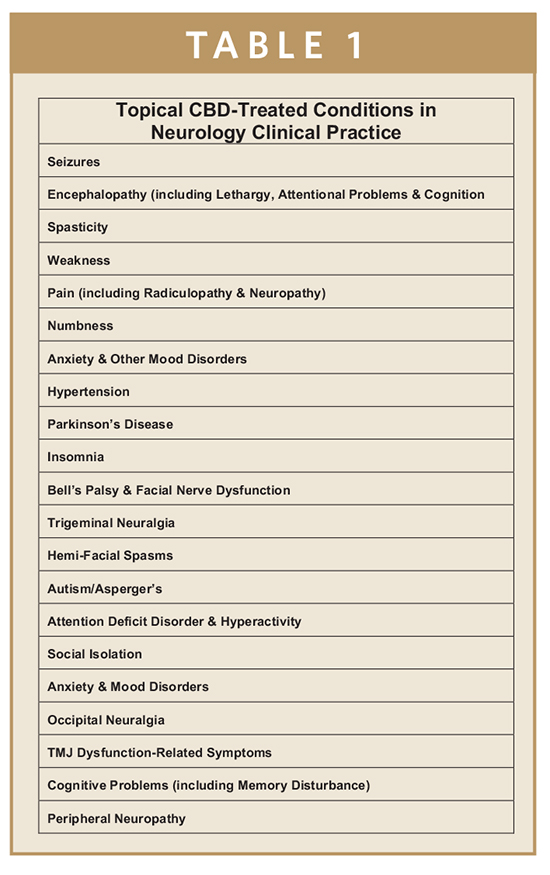 As β-Caryophyllene also activates cannabinoid receptors, it was formulated for use as DIRECT EFFECTS Topical Therapy. The resulting white product with slight aroma of cloves easily dissolves into skin within a few minutes of application following gentle rubbing.

Topical Therapy with β-Caryophyllene, Cari-Derm, 30 mg applied to the back of neck (BOTN) or to the spinal regions elsewhere where affected, and at peripheral areas of neurological dysfunction, provided relief and benefit for the following conditions within 10 to 15 minutes of topical application:

Duration of therapeutic effect ranged from a few hours to an entire day, depending on condition treated; and its severity and duration. The only side effects expressed were occasional tingling and slight transient burning sensation following topical cream application. There was a rare headache. Rash or irritation at the site of application was experienced in less than 5% of patients treated. Many patients continue to use topical caryophyllene (Cari-Derm) on a regular long-term basis without significant problems. In particular, because of its non-systemic nature, no systemic side effects or drug-drug interactions were observed.

Direct Effects Topical Therapy with Non-Cannabis-Derived CB2 Cannabinoid Receptor Agonist β-Caryophyllene provides therapeutic benefits similar to those observed with the cannabinoid, cannabid iol (CBD). Sourced from other than cannabis and hemp, which remain controversial and regulated in some areas of the country and the world, caryophyllene provides means for cannabinoid therapy without restrictions or associated stigma. It uses readily available natural sources of cannabinoids in the form of caryophyllene. Further, in using Direct Effects Topical Therapy for delivery, potential systemic side effects and drug interactions are avoided, as observed with other compounds similarly used.14

In addition, as has also been observed with CBD, topical caryophyllene may be combined with a traditional pharmaceutical agent, such as apomorphine, milnacipran, 4-amino pyridine, tizanidine, sumatriptan, and others to capitalize on the concept of Cannabinoid Augmented Neuro-Therapeutic Effect in DIRECT EFFECTS Topical Therapy. This is a process wherein a synergistic therapeutic process occurs when a cannabinoid, such as CBD or caryopyllene, is mixed with a traditional pharmaceutical agent as a combined topical product to treat a specific medical condition. The combined therapeutic effect of the two agents is greater than that of each individually, suggesting synergism. This effect has been observed in treating neuropathic pain, headache, muscle spasm, spasticity, tremor and other movement disorders; as well as mood disorders, such as anxiety and panic attacks. 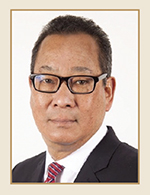 Ronald Aung-Din, MD, practices General Neurology and Neuropsychiatry in Sarasota, FL. He is one of few neurologists among the less than a hundred physicians in FL who are currently certified and actively prescribing medical cannabis for their patients through the state’s Department of Health Compassionate Use Registry. In addition to active private clinical practice, Dr. Aung-Din has functioned as Principal Investigator in over 60 clinical trials through his affiliation with Lovelace Research Institute, Albuquerque, NM, helping bring to market drugs in Epilepsy, Multiple Sclerosis, Neuropathic Pain, and Parkinson’s Disease. In May 2009, Dr. Aung-Din founded AfGin Pharma, LLC, a research and development biopharmaceutical company dedicated to Direct Effects Topical Neuro-Affective Therapy, a novel non-systemic delivery of neuro-active compounds useful in treating neurological and neuropsychiatric conditions. The therapy is unique in that rapid (within 10 to 30 mins) therapeutic results are achieved without usual systemic side effects and drug interactions as the bloodstream is not involved in the therapeutic process. To date, 7 patents relating to the technology have been granted by USPTO and the EU and Australian patent offices. Several other patents are filed and pending. For additional information, please contact Dr. Aung-Din at aungdinmd@afginpharma.com or visit www.aungdinmd.com or www.afginpharma.com.