Laurie L. Sullivan and Shalini S. Dewan, BCC Research Analysts, believe with the advent of genetic engineering and recombinant DNA technology, it is now possible to produce a wide variety of human proteins, and that these novel technologies have lifted the market for therapeutic proteins to new heights.

INTRODUCTION GlobalData estimates that the value of the Non-Small Cell Lung Cancer (NSCLC) market in the 8 major markets (8MM) in 2015 was $6.21B. This market is defined as sales..

INTRODUCTION   Driven by several novel regimens recently receiving approval in the US and in Europe, high cure rates exceeding 90% are now achievable for most patients suffering from chronic..

Michela J. McMullan, PhD, GlobalData Analyst, reports that although the ACS market is set to grow at a CAGR of 4.6%, reaching $12.1B by 2025, the potential for the market to be even more lucrative exists, especially in the sizable lipid-targeting arena.

Laurie L. Sullivan and John Bergin, MS, MBA, BCC Research Analysts, indicate that NGS has matured into an essential life science tool for genetic studies in a range of applications, and the industry is on the cusp of a second growth phase, powered by new applications in clinical diagnostics.

Robert C. Getts, PhD, and Jessica Bowers review how the 3DNA platform is composed entirely of noncoding DNA assembled through the sequential hybridization of single strands of DNA into a network of double-stranded nucleic acid having a controlled architecture, and multiple attachment sites for drug and targeting molecules.

John A. Bermingham, asks if you have ever been really hungry? He doesn’t mean the hunger you experience in the morning or just before dinner. He’s talking about major league hunger! 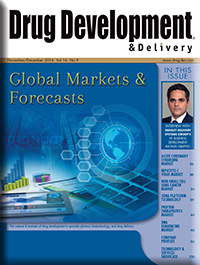