Cystic fibrosis (CF) is a life-shortening genetic disease that affects an estimated 70,000 people worldwide, including approximately 65,000 in the US and Europe.1,2 CF is caused by mutations in the gene that encodes the cystic fibrosis transmembrane conductance regulator, or CFTR, a membrane protein channel that helps to regulate fluid and electrolyte balance in epithelial tissues throughout the body. Until recently, medical therapies were unable to target the underlying genetic cause of CF and could only address symptoms.

People with CF have inherited two copies of the defective CFTR gene, one copy from each parent. Because the defective CFTR does not function normally, patients experience a buildup of thick mucus in the lungs and other vital organs. Lung disease, the most critical manifestation of CF, is characterized by airway obstruction, infection, and inflammation, such that more than 90% of all patients with CF die of respiratory failure.3 There is no known cure for CF, and the predicted median age of survival in the US is approximately 39 years.4

Patients with CF typically require lifelong treatment, with multiple daily medications, and frequently require hospitalization and potential lung transplantation. Fortunately, throughout the past several years, the advancement of drugs that modulate the defective CFTR protein, or CFTR modulators, has allowed the focus of CF treatment to shift beyond important palliative care measures to disease modification.

With approximately 127 known disease-causing mutations in the CFTR gene – including the most prevalent mutation, F508del, which is found in approximately 86% of all patients with CF – the ability to increase and stabilize mutant protein function, and thus restore fluid and electrolyte balance in the cell, have become the key goals for addressing the underlying cause of the disease.5,6

In the F508del mutation, the deletion of an amino acid results in a misfolded CFTR that is targeted for degradation inside the cell. This degradation is facilitated by chaperone proteins, such as the Hsp70/Hsp90 organizing protein, or HOP. As a result, not enough CFTR reaches, or “traffics,” to the cell surface, and the F508del mutation is therefore referred to as a trafficking mutation. In addition, any F508del-CFTR that does reach the cell surface is relatively unstable and is rapidly retrieved from the cell membrane, a process that is also facilitated by chaperone proteins. In the US, approximately 47% percent of patients with CF are homozygous and have two copies of this mutation, and approximately 39% of patients with CF are heterozygous and have one copy.7

The development of two particular classes of CFTR modulators in recent years –potentiators, which help with protein channel opening, or “gating,” and correctors, which assist in CFTR protein folding and trafficking, have changed the entire treatment paradigm for the CF community.

In early 2012, ivacaftor (Kalydeco®) became the first CFTR potentiator approved in the US for people with a gating mutation, G551D, in the CFTR gene.8 In gating mutations, enough CFTR gets to the cell surface, but the channels do not stay open long enough for adequate chloride transport. By prolonging the opening of the channel, the clinical development program was able to show that treatment with Kalydeco resulted in significant and sustained improvement in lung function for the 4% of CF patients with this mutation.9 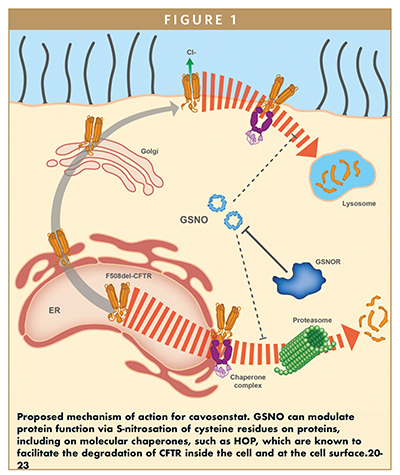 Meanwhile, researchers were also working on how to address the complexity of the defects that plague the F508del mutation. With this mutation, there are defects in trafficking, gating, and membrane stability.

In 2015, the first pharmacological approach to improve CFTR function in patients who are homozygous for the F508del mutation was approved.10 Lumacaftor/ivacaftor (Orkambi®) utilizes a combination of a CFTR corrector and a potentiator. The combination affects CFTR protein function through enhanced protein folding and channel opening, but has yielded only modest improvements in lung function, as compared with the more clinically significant improvement observed for potentiator (ivacaftor) monotherapy in subjects with CFTR gating mutations, underscoring again the complexity of the F508del mutation.11,12 It is believed that because these two classes of modulators do not directly address F508del-CFTR cell degradation and membrane stability, a management strategy that can overcome these shortcomings may in fact complement the current approach of using a combination of two CFTR modulators.13,14

A third, new type of CFTR modulator under investigation, known as a CFTR stabilizer, aims to increase CFTR stability by reducing degradation inside the cell and prolonging CFTR membrane residence time. The drug candidate, cavosonstat (N91115), is orally bioavailable and restores levels of Snitrosoglutathione (GSNO) by inhibiting the catabolic enzyme of GSNO, known as S-nitrosoglutathione reductase (GSNOR). GSNO is the human body’s most abundant low-molecular-weight Snitrosothiol, or SNO, and while SNOs are normally present in the human airway, concentrations tend to be reduced in patients with CF, contributing to the dysfunction of CFTR.15,16

GSNOR INHIBITION AS A COMPLEMENTARY APPROACH

In preclinical studies, cavosonstat was shown to be a potent, selective, and reversible inhibitor of GSNOR and that GSNOR inhibition in fact increases GSNO levels. It increased measures of F508del-CFTR function when used alone, as well as when added to correctors, potentiators, and combinations of GSNO levels, cavosonstat increases CFTR stability through modification of chaperone proteins involved in CFTR degradation, which is independent of, and complementary to, the mechanisms of corrector and potentiator therapies. These data provided the rationale for developing cavosonstat as an add-on therapy to available CFTR modulators.20-21

Cavosonstat has progressed through initial Phase I studies and is now being tested in Phase II. In October 2015, Nivalis Therapeutics, a clinical-stage biopharmaceutical company, announced topline results from a Phase Ib clinical study evaluating cavosonstat as the only CFTR modulator in adult CF patients with two copies of the F508del mutation. The randomized, double-blind, placebo-controlled, parallel group study included 51 adult CF patients who were randomly assigned to receive placebo or cavosonstat at doses of 50, 100, or 200 mg administered twice daily for 28 days. The trial demonstrated that cavosonstat was safe and well tolerated over the dose range studied. 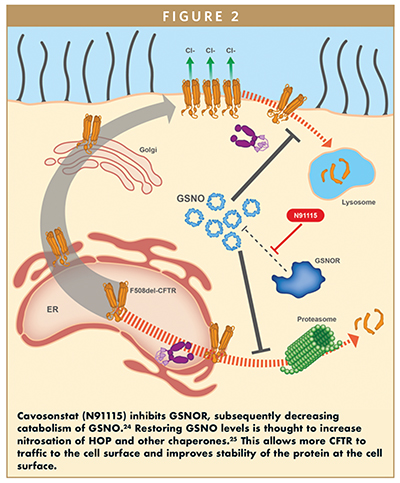 The pharmacokinetic profile demonstrated that cavosonstat was absorbed rapidly, as indicated by the 2-hour time to peak concentrations and exhibited linear and predictable exposure levels. While not powered to demonstrate statistically significant clinical efficacy, there was a trend toward a modest reduction in sweat chloride at the highest dose studied that may suggest a threshold effect for CFTR modulation (Day 28 placebo difference -5.2 mmol/L, 95% CI -11.7, 1.4, p = 0.11, within-dose group change -4.1 mmol/L; p = 0.032).22

A Phase II program is currently investigating cavosonstat in combination with correctors and/or potentiators, based on the rationale that the distinct mechanism of action of cavosonstat on CFTR processing and cell surface stability may complement the effects of other CFTR modulators in subjects with the F508del mutation and with gating mutations. Based on the results of the Phase Ib study, doses of 200 and 400 mg administered twice daily were chosen for the initial studies. This past July, Nivalis announced that the last patient enrolled in the larger of the two Phase II clinical studies of cavosonstat had received their first dose. In this study, cavosonstat is being evaluated for the treatment of CF patients, who have two copies of the F508del mutation, when added to Orkambi™ (lumacaftor/ivacaftor). The primary clinical efficacy outcome will be the absolute change from baseline in percent predicted FEV1. A total of 138 patients have been enrolled at 46 sites in the US, and topline results are expected by the end of 2016.

A second Phase II proof-of-concept study is evaluating the effect of cavosonstat as add-on therapy to Kalydeco™ (ivacaftor) in adult patients who have one copy of the F508del mutation and a second mutation that results in a gating defect in the CFTR protein. In the US, approximately 4% of patients have gating mutations, such as G551D, which are treated with potentiators to help the channels open, or “gate,” properly. The first patient was enrolled in May 2016. Topline results from this study are expected in the first half of 2017.

The US FDA has granted cavosonstat Orphan Drug Designation in cystic fibrosis, a program that provides a special status to drugs and biologics intended to treat, diagnose, or prevent diseases and disorders that affect fewer than 200,000 people in the US, as well as Fast Track Designation. Through the Fast Track program, cavosonstat may be eligible for priority review at the time of a new drug application (NDA) filing and may also be eligible to submit completed sections of the NDA on a rolling basis before the complete application is submitted.

Increases in bio-available nitric oxide (NO) are associated with anti-inflammatory and smooth muscle relaxant effects, especially in organ systems characterized by smooth muscle and endothelial/epithelial layers, such as the lung and cardiovascular system.23 In CF, ancillary anti-inflammatory effects may provide clinical benefit as the GSNO pathway inhibits inflammatory mediators that are associated with the pathophysiology of the disease. Smooth muscle effects may also improve airway function and be complementary to Orkambi. 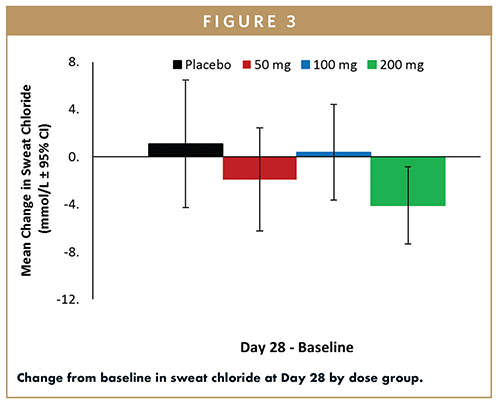 Asthma is another inflammatory lung disease where the role of GSNOR has been well studied.24 GSNOR is endogenously present in the lung, and increased activity of this enzyme leads to less GSNO-mediated smooth muscle relaxation.25 GSNO levels are lower in the airways of asthmatics than unaffected individuals.26 In addition, GSNOR knockout mice have exhibited an increase in lung S-nitrosothiols and are protected from allergen-induced airway hyper-responsivity.27 Restoring levels of GSNO in mice has also been shown to increase beta-adrenergic receptor expression and prevented agonist-stimulated desensitization, effects that were believed to be secondary to nitrosation of G protein-coupled receptor 2 (Grk2).28 Reversing beta-adrenergic receptor desensitization could play a key role in treating asthma. Nivalis’ preclinical GSNOR inhibitor program has previously demonstrated anti-inflammatory effects and the prevention of airway hyper-responsiveness in animal models of asthma and in patients with asthma.29 All of these findings support the rationale for future clinical studies of GSNOR inhibitors in asthma.

Cavosonstat is a CFTR modulator with a novel mechanism of action that stabilizes and improves mutant CFTR processing. The initial goal of Nivalis’ clinical development program is to show that cavosonstat represents a safe and effective option for patients with CF with at least one copy of the F508del-CFTR mutation; and that when used with correctors and potentiators, improves patient outcomes, including lung function. 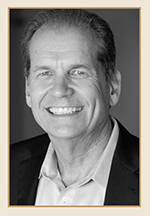 Dr. Steven Shoemaker is Vice President, Clinical Research and Development and Medical Director of Nivalis Therapeutics. Dr. Shoemaker earned his BS in Chemistry from Stanford University and his MD from the UCLA School of Medicine. His subspecialty clinical training was in Pulmonary and Critical Care Medicine at the University of Colorado Health Sciences Center.