There is no greater medical therapeutics “double-edged sword” than cannabis. Benefits in treating symptoms of diverse conditions have been known for thousands of years. Its psychoactive effects have caused abuse and labeling as a “gateway drug” for more addictive compounds. No class of compounds has generated more controversy and stigma.

Although defined under federal law as having no medical use, US Patent No. 6630507 was granted in 2003 to the US Department of Health and Human Services for cannabinoids to treat a wide range of diseases. Cannabinoids as Antioxidants and Neuroprotectants claims exclusive rights for treating Alzheimer’s, Parkinson’s disease, stroke; and states of oxidative stress, such as heart attack, Crohn’s disease, diabetes, and arthritis.1 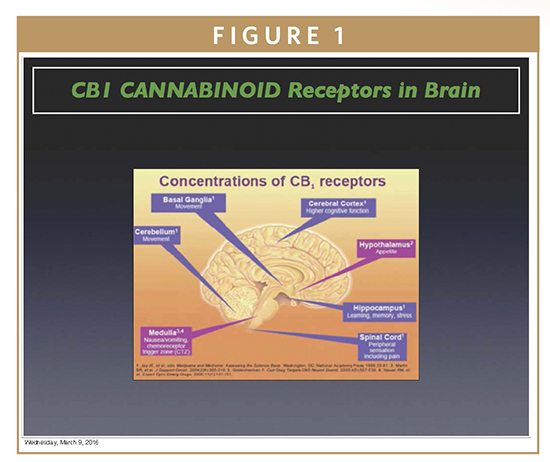 Up to the 1900s, medical cannabis was widely marketed and prescribed in the US. In 1890, Eli Lilly and Parke Davis joint-ventured to breed cannabis in Greenfield, IN, producing Cannabis Americana. In 1937, Congress enacted cannabis prohibition.2

The endocannabinoid system, ECS, consists of cannabinoid receptors located throughout the mammalian nervous system. ECS is involved in a variety of physiological processes, including neurological functions dealing with pain, mood, memory, movement, and sensation. Immune function and cell homeostasis are also maintained by ECS. ECS mediates psychoactive effects of cannabis. Cannabinoids are a diverse class of compounds that include those in cannabis.3,4

Two primary endocannabinoid receptors have been identified. CB1 receptors are predominantly in the brain and nervous system as well as in peripheral organs and tissues. These are acted on by the endocannabinoid Anandamide. The other main endocannabinoid, 2-Arachidonoylglycerol (2-AG), is active at both the CB1 and CB2 receptors. Its mimetic phytocannabinoid is cannabidiol, CBD; that of Anandamide is THC, responsible for psychoactive effects. Both 2-AG and CBD are involved in appetite regulation, immune function, and pain management.5,6 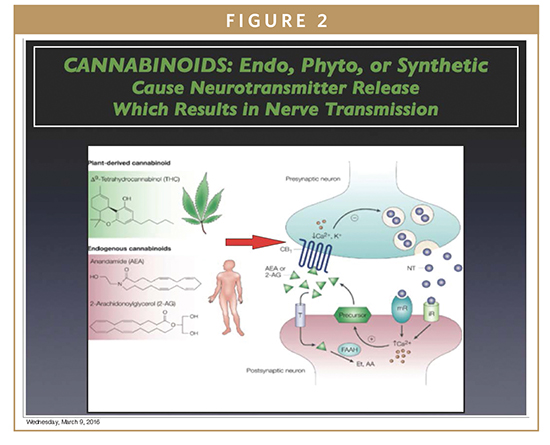 Cannabinoids act on cannabinoid receptors on cells to influence neurotransmitter release. Endocannabinoids are produced naturally in humans and animals, phytocannabinoids in cannabis and some other plants; and synthetic cannabinoids are chemically manufactured. Δ9-tetrahydrocannabinol (THC), is primary psychoactive compound of cannabis. Cannabidiol (CBD), making up to 40% extracts of plant resin, has varied medical benefits. At least 85 different cannabinoids have been isolated from cannabis. 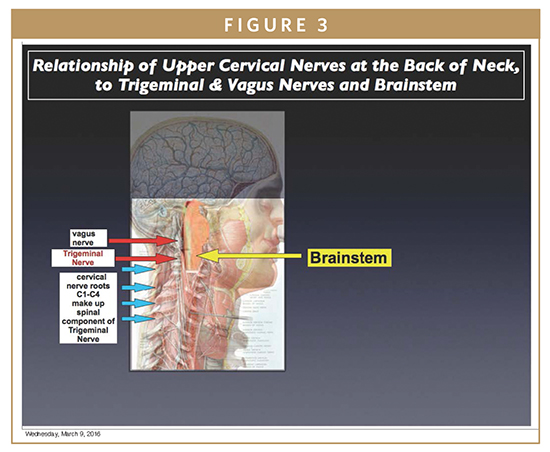 Cannabinoids produce physiological and behavioral effects through specific membrane-bound receptors. CB1 receptors are found in the brain and are responsible for euphoric and anticonvulsive effects of cannabis. CB2 receptors in the peripheral nervous system appear responsible for anti-inflammatory effects, such as pain relief.

Cannabidiol, CBD acts as serotonin (5-HT1A) receptor agonist, which may explain its antidepressant, anxiolytic, and neuro-protective effects.7,8 CBD modulates opioid receptors involved with pain perception.9 CBD is not psychoactive and relieves convulsion (seizures), inflammation, anxiety, and nausea. It has been found to prevent short-term memory loss from THC. Antipsychotic effects of cannabidiol represents potential treatment of schizophrenia.10-12 CBD has a greater affinity for CB2 than CB1 receptors.

CBD is considered to have a wide scope of medical applications. An oral CBD formulation received orphan drug status in the US for Dravet syndrome, an intractable seizure disorder, Severe Myoclonic Epilepsy of Infancy (SMEI). Nabiximols (Sativex) is an aerosolized oral mist of CBD and THC approved in Canada for multiple sclerosis pain.13,14

CBD has been found safe and well tolerated as treatment for schizophrenia. A double-blind trial compared cannabidiol to atypical antipsychotic amisulpride in acute paranoid schizophrenia. Both treatments showed significant decrease in psychotic symptoms, but cannabidiol had fewer side effects. Studies also show cannabidiol decreased symptoms of social anxiety and isolation.15,16 Cannabidiol has demonstrated antidepressant-like effects in animal models of depression.

A major shortcoming in cannabinoid therapy is its potential for undesirable side effects. Of particular concern is in children with intractable epilepsy, exposing developing brains to unknown long-term effects of systemic cannabinoids. Direct Effects Topical Drug Delivery provides a potential solution.17-19

In view of the beneficial effects of CBD in various neuropathic and psychiatric conditions, studies were performed with Direct Effects topical delivery of CBD applied as cream to the back of the neck (BON) and other areas of the spine and peripheral nerves, as appropriate. Intent is modulating neural afferents to affect efferents as relief of pathologic symptoms. BON is unique considering the magnitude of available afferent input available through skin-free nerve-endings. 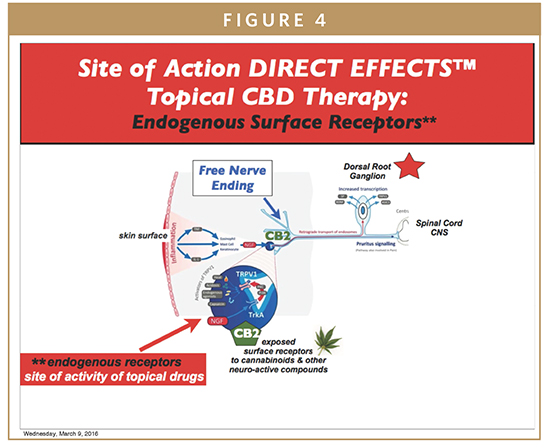 Direct Effects is a means to deliver CNS-active drugs, including cannabinoids, through activating neurochemical receptors existing on free nerve-endings. There exist hundreds of thousands to millions of free nerve-endings below the skin surface (stratum corneum) at the upper posterior cervical region, BON. Cervical nerve roots, C1-C4, and occasionally C5 provide direct neural connections to afferent components of the trigeminal, vagal, and cervical sympathetic nerve systems inputting CNS. No other location has such a magnitude of afferent neural input accessible through skin nerve-endings.

Modulated CNS efferents responding to afferent activation results in improvement of symptoms of brain and spinal cord dysfunction. In using direct nerve pathways without restrictions of blood flow and the blood-brain-barrier, therapeutic onset is greatly reduced, and systemic side effects are avoided.

Direct Effects therapy has rapid therapeutic onset of action of less than 10 to 15 minutes, and maximal benefit within 30 minutes. Therapeutic effect is 4 to 12 hours or more, depending on condition and severity.

Direct Effects drug delivery has been used with success with sumatriptan in migraines, apomorphine in Parkinson’s disease and related movement disorders, and tizanidine in muscle spasm and tension headache. US and international patents have been granted in these areas. In view of superiority of topical delivery as compared to systemic use as oral tablet, injection, nasal spray, or transdermal patch, it was believed cannabinoids could be similarly applied as a cream to treat symptoms of neuropathic conditions. This was of particular interest in view of known systemic side effects of inhaled and ingested cannabinoids.

In a study of 88 patients, topical CBD was found effective in treating the symptoms of the following conditions:

-34 subjects with seizures, encephalopathy, and spasticity responded to topical CBD therapy at BON
-13 subjects with headaches and neck pain benefitted from topical CBD application to BON
-16 subjects with back/spin and extremity pain, fibromyalgia achieved relief with topical CBD applied at BON and at other appropriate spinal and extremity/peripheral locations
-6 subjects with Parkinson’s, tremors, movement disorders responded to topical CBD treatment at the BON
-Dosing frequency ranged from once daily to 3x/day depending on chronicity and severity of condition; and individual response to topical CBD therapy (each 1-g dose contained 1.5 to 3% CBD)
-Duration of treatment with topical CBD ranged from several days to as needed/prn for relief of episodically symptomatic disease states; to months of continued daily therapy for chronic conditions, such as epilepsy, Parkinsonʼs/movement disorders, and spasticity with permanent symptoms or impairments
-The longest continuous use period in the aforementioned patients was 6 months of 2x/day for a 7-year-old male with absence seizures; however, the longest period of continued use for any patient with topical CBD is18 months for intractable epilepsy (refer to Figures 5a and 5b showing attenuation of absence seizure focus, 3/second spike and slow wave complexes, with topical CBD therapy at BON) 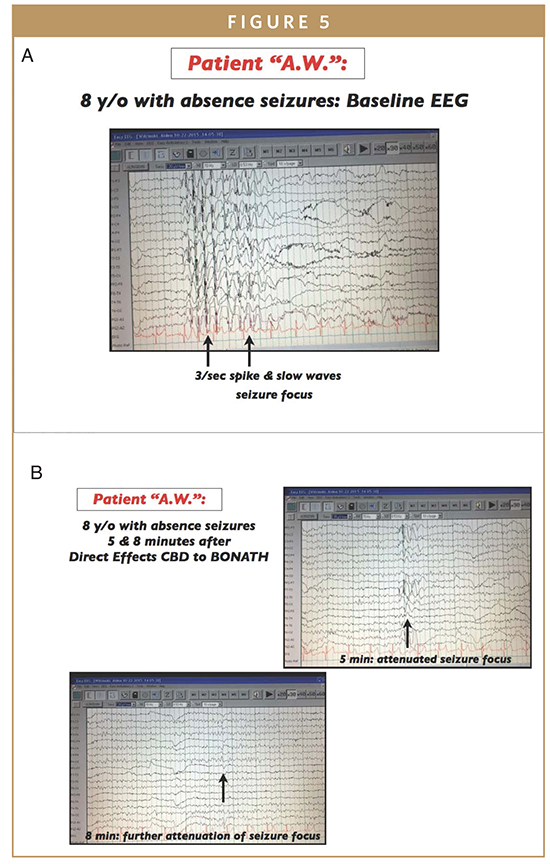 -No systemic side-effects were observed or reported in any subject exposed to topical CBD. Several patients (less than 10%) reported itching or slight rash at CBD cream application site. The formulation was changed in these cases.
-In some patients on long-term medications, some previous medications were lowered or discontinued as a result of clinical improvement from topical CBD

Topical CBD is beneficial in treating symptoms of a number of neuropathic and psychiatric conditions. Individual clinical response varied depending on condition treated and on severity and longevity of symptoms. Topical CBD therapy was overall well tolerated. 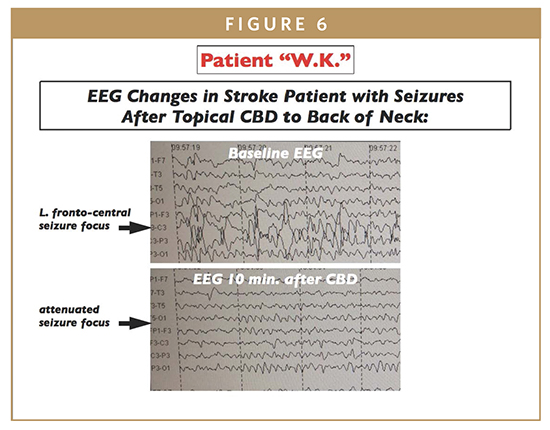 In a few instances, topical CBD treatments rendered subjects free of symptoms that had been present for some time. This suggests “neural reprograming” and re-establishment of homeostasis. This possibility of disease modification and pathologic process reversal deserves further investigation. It places cannabinoids in a unique category of therapeutic compounds. Studies in rat models of MS have suggested such phenomena with remyelination of de-myelinated areas with CBD therapy.

Some conditions were more responsive to topical cannabinoid therapy than others. Seizure disorders and epilepsy responded most robustly to topical CBD application at BON. Complete seizure freedom was achieved in a number of patients with previous intractable epilepsy on multiple drug regimen. 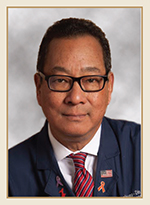 Ronald Aung-Din, MD, practices General Neurology and Neuropsychiatry in Sarasota, FL. Through affiliation with Lovelace Research Institute, Albuquerque, NM, he has functioned as Principal Neurology Investigator in over 60 clinical trials, helping bring to market drugs in Epilepsy, Multiple Sclerosis, Neuropathic Pain, and Parkinson’s Disease. In May 2009, Dr. Aung-Din founded AfGin Pharma, LLC, a research and development biopharmaceutical company dedicated to Direct Effects Topical Neuro-Affective Therapy, a novel non-systemic delivery of neuro-active compounds he discovered useful in treating neurological and neuropsychiatric conditions. The therapy is unique in that rapid (within 10-30 mins) therapeutic results are achieved without usual systemic side effects and drug interactions. To date, 7 patents relating to the technology have been granted by USPTO and the EU and Australian patent offices, with others filed and pending.