The tongue and soft palate play a major role in the production of snoring and obstructive sleep apnea, but most of us do not think of snoring as something to be overly concerned about. Snoring is a common problem throughout the United States and worldwide, with estimates that 86% of men and 47% of women snore.1-3 However, frequent, loud snoring may be a sign of obstructive sleep apnea (OSA), a common and potentially serious disorder that can lead to many systemic diseases, and in which breathing repeatedly stops and starts as you sleep. Although sleep apnea is treatable, it often goes unrecognized with most of the OSA cases (85%) remaining undiagnosed.4-12

Both of the aforementioned cited conditions, ie, OSA and SN, have an anatomical and physiological relationship with pathological adverse health consequences. Snoring is due to the vibration of the soft palate on the roof of the mouth, as air moves in and out during breathing due to narrowed air passages (Figure 1). OSA is a prevalent breathing disorder and is considered a major public health issue, affecting 5% to 15% of the general population. OSA is due to the flaccid tongue falling back and obstructing the air passages as you fall asleep.1-3 It is known that sleeping on one’s back greatly increases the risk of OSA (Figure 1), whereas sleeping on the side reduces it.13 In relation, afflicted individuals need to know that frequent, loud snoring may be a sign of sleep apnea, in which breathing pauses can last between 10 to 20 seconds and can occur up to hundreds of times a night. In relation, in mild sleep apnea, a person may stop breathing 15 times an hour, and in moderate-to-severe cases, 20 to 30 events per hour. Another associated OSA problem is that up to 95% of patients with OSA snore.11 In a story that is told repeatedly, bed partners of the afflicted also experience sleep disturbances and may seek relief by sleeping in another room to avoid the snoring sound and restless sleep patterns of their partner.

OSA affects people in a number of ways, and has been linked to systemic complications, such as elevated blood pressure, coronary artery disease, heart failure, impaired glucose tolerance, insulin resistance, stroke, impaired alertness, and being lethargic during the day, among other conditions.4-14 Another interesting research finding is that for people without OSA, sudden cardiac death risk is minimal between midnight and 6 AM, but for OSA victims, the risk of sudden cardiac death during that time is elevated more than two-and-a-half times.8 It has also recently been found to increase cancer death risk fivefold and OSA wreaks havoc upon the hearts electrical system.10,14 Another troubling issue is that incidence increases with obesity, a finding that effects more of the population every year.

With all of the aforementioned systemic diseases linked to OSA, it is no wonder that sleep centers are needed all over the world to study, test, diagnose, and treat these conditions using countless diverse modalities and exploring various future therapeutic measures.4-15 This simple fact is that additional simple therapeutic modalities are needed to address these chronic conditions, and if not treated properly, can result in serious health consequences.

HOW MANY ARE AFFECTED BY THIS SLEEP RELATED DISORDER? 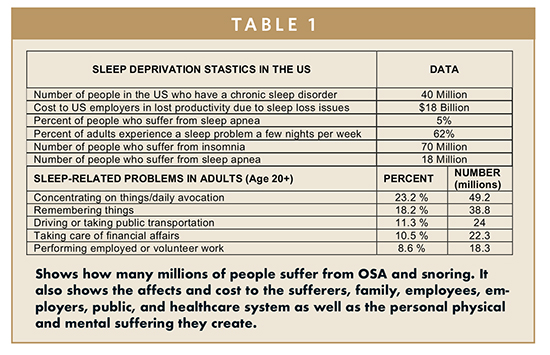 So, what are the treatments available now? Well there are many non-invasive and invasive OSA and anti-snoring devices on the market; including various sleeping positions, sleeping with a tennis ball anchored to the back, mouth guards pulling the jaw forward, and electrical stimulation of the muscles of the tongue to increase its tone, to drastic invasive surgery and so on!13 None of the these solutions are infallible and fail-safe. The most important developed treatment for OSA is a device application that provides Continuous Positive Airway Pressure, commonly referred as CPAP, which affixes to a patient’s nose or mouth during sleep. The pressure in the mask is transmitted to the pharyngeal area, splinting the collapsible upper airway walls, thereby avoiding obstruction. But patient compliance is poor due to discomfort, inconvenience, and side effects.

CPAP provides therapeutic benefits and is not invasive and irreversible, unlike surgery, and does not require as much individual customization as an oral appliance. Thus, CPAP is what most sleep apnea patients will be urged to try first before any more invasive procedures.

The Cons
Unfortunately, here lies the issue because the list is extensive. Many patients are non-compliant to CPAP mainly due to discomfort of using the machine, with about 30% of patients refusing it from the beginning. Of those who consent, about a quarter stop in the first year, and about half stick to it long-term. It needs a Sleep Center to test, diagnose, and prescribe, and it is relatively expensive. It must be dragged around whenever a person travels, and it does take some getting used to because you have something affixed to your face and it produces a strange sensation while its being used. Use of it involves a sleep center physician, respiratory therapist, and supporting nursing team in addition to patient education – making sure patients understand the results of their sleep studies. Unfortunately, it is not always a quick fix, and the patient’s attitude and conformance plays a big part. These facts are testament that there is a large, unmet clinical need that still needs to be addressed to impact people afflicted with either condition.

LATEST DEVELOPMENTS FOR THE TREATMENT OF SNORING & OSA

Recently, there were two patents issued to Dr. T. R. Shantha, MD, PhD, (US Patent No. 9,072,613 B2, Jul. 7, 2015, and US patent No. 9,254,219 B2, Feb. 9, 2016: Snoring & Obstructive Sleep Apnea Treatment)16,17 that came to my attention and that need to be considered on their merits as being simple methods to address the aforementioned drawbacks for adherence of a snoring and OSA device. I state this because the device targets the anatomical, physiological, and mechanical etiology, which results in the production of snoring and OSA. These devices also act as a secondary air passageway using the mouth, allowing for alleviated breathing function. The fact is that these patents, when developed, counteracts the fundamental problem of the flaccid tongue falling back, the soft palate vibrating, and the obstruction of the air passages resulting in the pathology of both snoring and OSA.

These patents provide methods for a dual mechanism to hold the tongue without allowing the tongue to move backward when one falls asleep in any position. The first mechanism provides a tongue-holding fixture that incorporates vacuum pressure that allows it to pull the tongue forward to prevent it from falling back on the air passage to the larynx. The second mechanism incorporates an elastic silicone non-reacting glove to cover the free moving portion of a user’s tongue using three vacuum suction cups to attach the device to the hard palate and the dorsal and ventral surfaces of the tongue. In my discussions with Dr. Shantha regarding the aforementioned patents, the device would be economical, easy to use, easy to transport, would not need constant supervision like a CPAP, and can be used at home or during travel. Additionally, he is also working on other methods to increase the tone of the tongue muscle to prevent it from sliding back that causes OSA, and the tone of the palatine muscles to prevent the vibration that causes snoring. Thus, this device presents a very compelling product for market development activities to address a large “gap” in the marketplace.

Figures 1 through 4 explain the mechanisms of OSA and snoring and the inventive devices described by Dr. Shantha’s patents and their use in snoring and OSA patients. 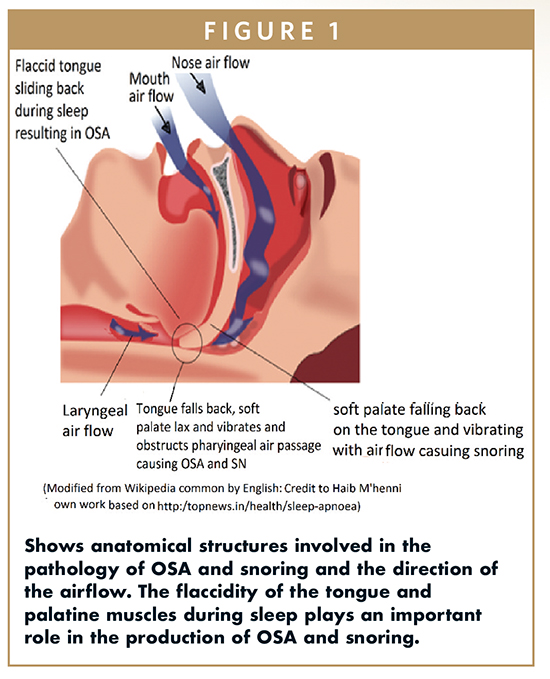 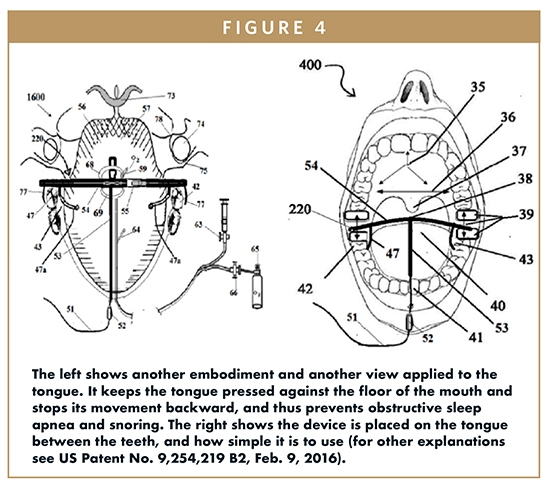 The device explained herein has merit because it addresses the underlying anatomic and physiologic etiology of snoring and OSA in a simple but inventive way. If developed, this device has the ability to increase patient compliance by reducing the use of CPAP machines, by making a sufferer’s life more comfortable, while preventing many of the contributing diseases. Speaking in regulatory terms, it even makes more sense because the device would be designated as a Class I device depending on the embodiments employed. Even better, it has the capability to impact the lives of millions of people around the world and rid them of a chronic and, in the case of OSA, a very chronic health disrupting debilitating condition. 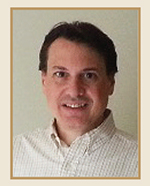 Bob Wieden is the President & CEO of Wedge Therapeutics, LLC, a medical technology company targeting neuromodulation and drug delivery technologies targeting Alzheimer’s, Parkinson’s, addiction, and depression. He is a serial entrepreneur that looks to fill “gaps” in unmet markets, and is a “man on a mission” when it comes to finding new therapeutic concepts to chronic diseases. He is a growth-oriented business builder that has led the development efforts for a plethora of idea-stage technologies and new business enterprises, with a direct focus on developing business strategies and market plans to guide new products and services to market. If you would like to discuss product development strategies or receive any more information on these patents, please contact me at the following: T: (651) 688-7754, E: bobw@wedgetherapeutics.com, www.wedgetherapeutics.com, or www.adventusmarketing.com.