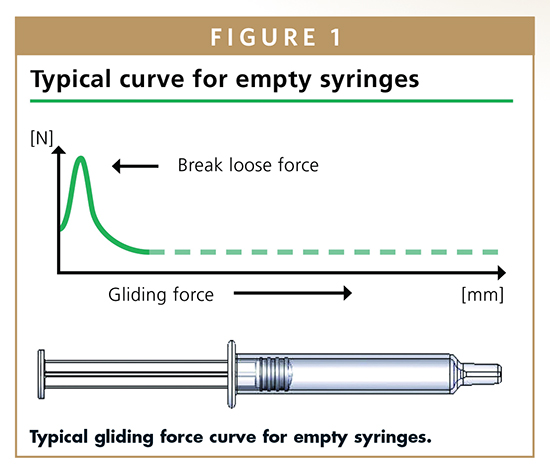 The comparison also extended to different storage periods. Measurements were taken immediately after plunger placement, as well as after 3, 6, 12, 24 and 36 months of storage at room temperature. Further measurements were taken in an accelerated aging environment (40°C, 75% humidity) after 3 and 6 months. In order to verify the statistics of the results, 20 parallel samples of all the aforementioned syringe systems were studied to create a database of more than 20,000 individual data records. The study determined the minimum, maximum, and mean values, as well the standard deviation of break loose and gliding forces. When the content of a syringe is discharged, there are two phases with different force profiles. First, it is necessary to overcome the resistance between the syringe barrel and plunger stopper to move the plunger head. This is called break loose force. Then, as the plunger stopper moves down the syringe barrel, it encounters friction resistance until the syringe barrel is emptied. That’s gliding force. Ideally, the gliding force curve is horizontal. The study identified a range of critical parameters that can cause problems in syringe usage. These are initially too high break loose forces, especially in connection with a sharp decline at the transition from break loose to gliding force. Both can cause distinct problems for the syringe user. Significant deviations between the same syringe combinations (parallel samples) are also critical because they make their use in autoinjectors problematic. Auto-injectors depend on a “reliable” syringe and constant forces. When syringes are used manually, such deviations mean that the user will experience some syringes with plungers that are easy to depress and some with plungers that are hard to depress. Syringe systems with gliding forces that increase from the start to the end of the injection were also problematic. Changes occurring over storage time, e.g. higher gliding forces after several months of storage, are also critical.

Gerresheimer believes that the syringe’s siliconization is a decisive factor that can be influenced in the production process. The mechanical function of a syringe depends on the precise dimensioning of all parts and, more importantly, the optimum interaction of the syringe barrel and plunger stopper. Other criteria include simple and safe handling, the complete discharge of all content, especially when the syringe is incorporated in a spring-driven autoinjector that always builds up exact pressure. The syringe’s siliconization has decisive influence on all these factors. It reduces the break loose and gliding forces during use, creates a tight connection between the plunger stopper and the glass, and provides a hydrophobic surface that facilitates the more effective discharge of syringe content.

The adsorption of pharmaceutical drugs by the glass surface can also be reduced with some formulations. Medical silicone oils are long established because they are harmless to health, more or less inert, viscoelastic, and hydrophobic. They are also included in the relevant pharmacopeia (Ph. EUR and USP). When using silicone oil as an antifriction coating in ready-to-fill syringes, it is necessary to take several decisive factors into consideration to guarantee syringe function. A silicone coating that is too thin or uneven can impair the syringe’s mechanical function. Too much silicone oil can, in some circumstances, result in the formation of free silicone oil droplets. Visible droplets are a cosmetic defect that is categorized as critical, particularly when the syringes contain ophthalmological medications. 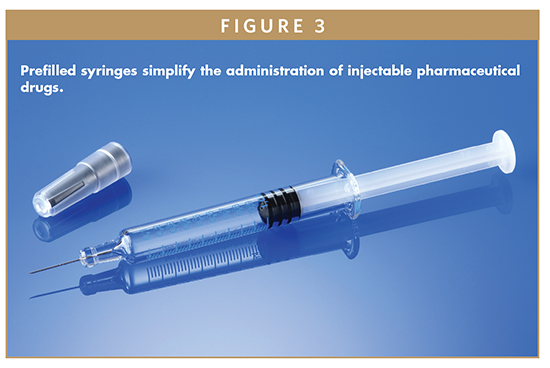 Droplets in biotech drugs can also cause sub-visual problems because the active ingredient binds with them, thereby reducing the quantity of available active ingredient. In many cases, therefore, the objective when developing prefillable syringes is to reduce the quantity of silicone oil to the minimum level possible without impairing the syringe’s mechanical function. In particularly critical fields of application, the silicone oil can be thermally bonded to the glass surface. In this case, the silicone oil is applied as an emulsion and then burnt on at temperatures more than 300°C. This creates stable covalent bonds between the glass surface molecules and the silicone oil to form a permanent hydrophobic anti-friction coating. The quantity of free droplets is less than 10% of those associated with traditional spray-on siliconization.

The results of the study contribute to a clearer picture of the factors of influence that are crucial to syringe function. Several common hypotheses were verified, while others were refuted. For example, the study design confirmed that accelerated aging is a reliable way of achieving faster and more informative results. This can considerably reduce the time required to perform future studies. The comparison of baked-on and spray-on siliconization revealed higher gliding forces in the case of baked-on siliconization, which is due to the lower quantities of silicone oil used. On the other hand, the number of free silicone particles was significantly lower in the case of baked-on siliconization. The widespread assumption was not confirmed that break loose forces in syringes with spray-on siliconization increase at a faster rate over the storage period than in syringes with baked-on siliconization. Generally, the effect of long-term storage tends to be moderate. 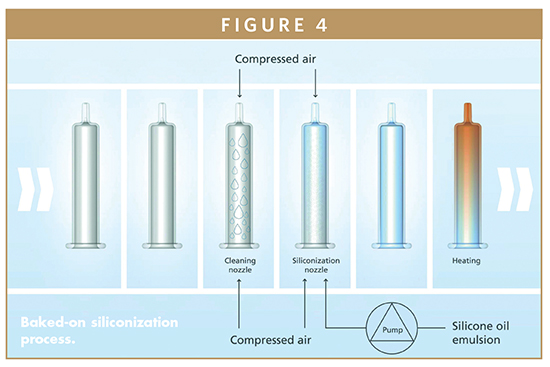 However, the type of plunger stopper used is of decisive significance. The choice of plunger stopper design, the rubber formula, the coating, and the siliconization have considerable influence on syringe function. Whether the plunger stopper is inserted by vacuum or vented placement only affects break loose and gliding forces in some plunger stopper types. The complex interrelationship between the components and the siliconization makes it clear that there is no universal solution for syringe function. Rather, a syringe system has to be individually tailored to the pharmaceutical drug, user and, in some cases, to requirements for integration in autoinjectors. The comprehensive data obtained in our long-term study enables us to provide customers with detailed advice on the choice of the right syringe system and to offer customized solutions that are optimized for all the parameters of their specific application.

Bünde underwent a recertification audit for its quality management system in 2015. Over the 7.5-day audit, the plant’s quality management system was reviewed to assess its compliance with the ISO 9001, DIN EN ISO 13485, and DIN EN ISO 15378 standards. The audit had a very positive outcome. Only one minor non-compliance was ascertained and immediately remedied, which meant that all the certificates could be reissued without a problem. This is a very positive result considering that the framework was extremely challenging. First, the audit was implemented with only one team, which shows that our quality management system is very well established and stable. Second, the recertification audit was a witness audit, so the auditors themselves were also being assessed. It was performed by the DQS auditors, who were assessed by auditors from the German Accreditation Body (DAkkS) in order to retain their accreditation. A witness audit doesn’t change the recertification process, but it does mean that the audit is generally very stringent and in strict conformity with the rules. 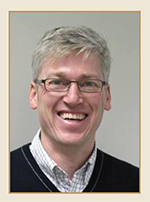 Bernd Zeiss studied Biology, Microbiology and Chemistry at the University of Göttingen, Germany. After several years working in the fields of contract research, clinical sales management and automated laboratory equipment, he today is a member of the Gerresheimer Buende business development team. He works in the Gerresheimer Centre of Excellence for prefillable syringes as Manager Technical Support Medical Systems Business Development. His main areas of work are customer support, investigating possible interactions between syringe components and drug substance and the evaluation of innovations like COP syringes in comparison to glass. Bernd Zeiss also carries out in-house prefillable syringe studies and prepares technical documentations for customers called “Technical Bulletins.”