The proportion of poorly soluble drug compounds in the development pipeline is on the rise, with 70% to 90% of current pipeline drugs falling in the two low-solubility classes of the Biopharmaceutical Classification System. With the emergence of new techniques to improve solubility, low-solubility compounds are more likely to advance to the clinic. But the large spectrum of available technologies can make it challenging for the formulation scientist to proceed in an informed and rational manner. At this point, the following questions should be addressed: what formulation technologies are available; what features of the drug might suggest one technology over another; are the technologies scalable and what are the costs; and what is the approach to making a rational technology selection? The following presents a brief overview of the various solubilization technologies, and a high-level strategy to aid in the selection of an appropriate formulation technology. Common formulation technologies available for poorly soluble drugs are listed in Table 1, with key attributes and high-level considerations. 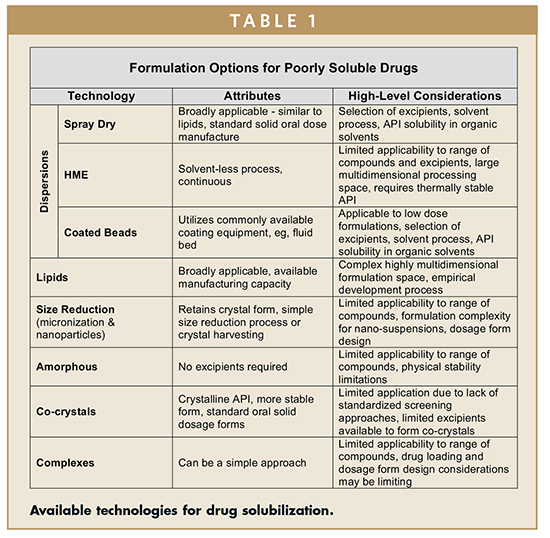 The technologies vary in the breadth of compounds to which they can be applied, and in the complexity of their formulations. Table 1 notes the main technologies plotted against these two factors. For example, size reduction to the micron level is relatively easy to achieve but is not applicable to a large proportion of poorly soluble compounds. On the other hand, lipid formulation technologies are more broadly applicable but more complex to formulate due to the large number of variables that must be considered. Most dispersion technologies are broadly applicable and relatively straightforward to apply; they typically involve fewer variables than lipid technologies, but more than size reduction to micron or nano-scale. The technologies shown in Figure 1 and Table 1 are briefly described below. 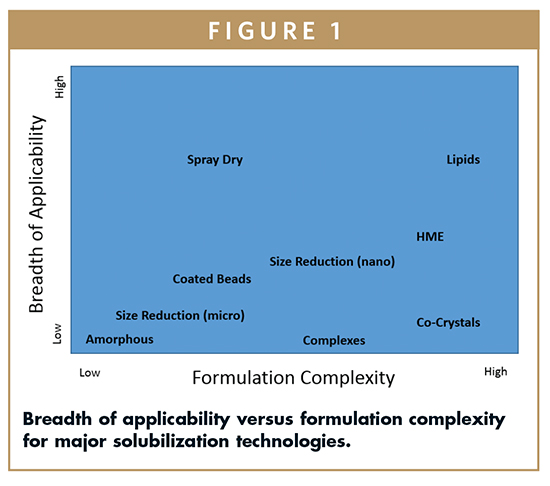 Spray drying is used to create amorphous solid dispersions (ASDs) of poorly soluble drug candidates. Depending on the drug properties, spray drying is effective because of the array of excipients that can be selected to optimize performance. The formulation approach involves co-dissolving the drug and polymeric excipient(s) in a mutually compatible organic solvent, such as methanol, ethanol, acetone, or dichloromethane. The solution is sprayed through a nozzle to form droplets from which the solvent rapidly evaporates to produce solid particles. The resulting ASD contains a homogeneous molecular-level mixture of the drug and polymeric excipients. This material can provide sustained levels of dissolved drug in targeted environments.

Spray drying is especially useful because a wide array of excipient and solvent choices makes it applicable to a large number of potential drug candidates. It is also scalable and can be used from the early stages of discovery through to commercialization. Considerations involved with spray drying are excipient choice, solvent choice, capital expenditures on scale-up, and stability of the resultant amorphous dispersion.

Hot melt extrusion (HME) is a thermal fusion process used to form amorphous solid dispersions. The API and thermoplastic polymer(s) are mixed and fed into a rotating screw contained in a heated barrel. The temperature is maintained such that the mixture becomes fluid, and the drug further mixes and dissolves into the molten polymer carrier. This mixture is then forced through a die and cooled to form a single-phase amorphous material. The inclusion of plasticizers in the initial formulation reduces the melting point and viscosity of the mixture.

Because the API and polymer are processed at a high temperature and shear, the possibility of thermally induced transitions, such as glass transition, melting point, thermal degradation, and high-temperature reactions, must be considered. The application of HME to APIs with high melting points can be challenging because the higher processing temperatures can degrade the polymers and possibly the API.

Coated bead technologies involve dissolving the API and a suitable polymer in organic solvents and spraying onto a substrate, such as sugar or microcrystalline cellulose beads. This approach deposits a layer of amorphous drug/polymer onto the substrate. As with spray drying, the API needs to be soluble in well-behaved organic solvent systems. Targeted dose levels of drug are a consideration when selecting this technology.

In lipid-based formulations, lipids are used as the primary agent to solubilize and deliver the drug compound. Therefore, a critical early step is to establish the solubility range of the drug in various lipids. Once formed, the drug/lipid mixture can sustain drug concentrations in targeted environments. Lipid formulations produce complex structures comprising micelles, micro-/nano-structures, and in some cases, liquid crystals, which are directly responsible for delivering the drug.

Lipid formulations can be complex because of the number of additives required to meet performance objectives. It is not uncommon for a formulation to contain three or more components. For instance, dietary lipids, which are known permeation enhancers, are sometimes combined with other lipids to produce a better formulation when a drug compound is both poorly soluble and non-permeable in the intestine. This adds to the complexity of the formulation and must be carefully considered during development.

The top-down process involves breaking drug crystals into smaller ones by dry or wet milling. This approach can reduce particle sizes down to 1 micron; a process commonly referred to as “micronization.” However, micron-sized particles may not sufficiently enhance the solubility of many poorly soluble APIs. To further improve the dissolution or absorption characteristics, particles can be reduced to the sub-micron or nanosize ranges.

In the bottom-up approach, nanoparticles are produced by solution-based drug recrystallization. The process requires careful maintenance of a supersaturated drug solution while inducing crystal nucleation, growth, and precipitation.

As particles get smaller, and surface area becomes larger, cohesive and adhesive effects can lead to particle aggregation or agglomeration, and the compound may stick to process equipment. These issues can be prevented with surface cohesion inhibitors and other surface chemical modifications.

This is a simple approach that involves dissolving a crystalline API in a suitable organic solvent and then spray drying. The approach works well for some compounds; many, however, tend to recrystallize, thereby compromising the physical stability of the amorphous form.

Co-crystals are crystalline structures usually comprising two or more unique components, one being the API and the other(s) being the co-former. By using suitable coformers in the crystallization process, the physical properties of the API can be improved, yielding for instance, better dissolution and stability characteristics.

In this approach, the API and a companion molecule, such as a cyclodextrin, form an inclusion complex. The API resides in cavities of the companion molecule, bound by noncovalent intermolecular forces. Because no covalent bonds are involved, the integrity of the API is preserved. The resultant formulation improves solubility and physical properties. API size and lipophilicity are important factors to consider.

In this section, we discuss a strategy for selection of a formulation technology based on specific characteristics of the drug. Table 2 shows a selection strategy chart with the characteristics on the vertical axis. These can be measured directly, or estimated by in silico prediction. Using the results, we can classify the drug into a high, medium, or low range for each property, and derive a shortlist of applicable technologies. 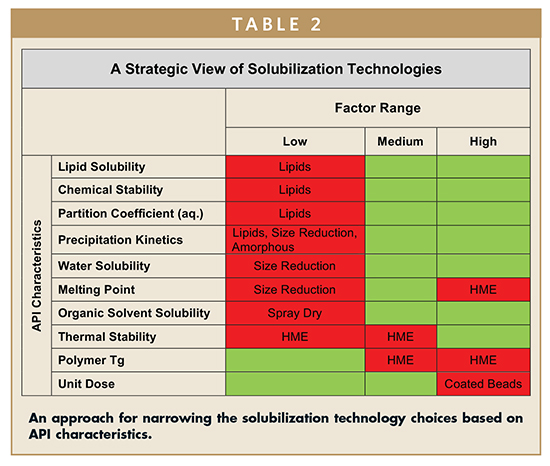 Selecting a formulation technology for a particular drug candidate can be a complicated process. There are many technologies available, each with a set of requirements and process variables that must be considered. By understanding the available technologies and knowing the key properties of the API, we can eliminate some of the options and simplify the decision process.

The technology map shows ranges of values because there are other factors that will influence the decision, such as how an API interacts with excipients. For example, if an API has limited solubility in organic solvents, spray drying can still be a valid choice if an excipient can provide excellent sustained dissolution profiles in targeted environments. This is especially true in cases where the dose is expected to be low. Additional considerations, such as performance, manufacturability, and stability, can also greatly influence which technology is best suited to meet the specific requirements of a project.

But generally speaking, the properties of the API are the primary driver of the technology choice. Knowledge of the API characteristics, as outlined in Table 2, directly leads to a more intelligent and rational decision as to which technology is most appropriate for any given drug formulation project. With this toolbox, timelines can be shortened, and more compounds can be advanced to the clinic using a solubilization technology that is well suited for clinical trials and commercialization. 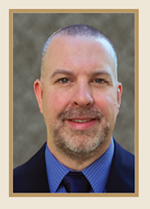 Dr. Matthew D. Wessel is Principal Scientist at Patheon, where he is responsible for developing predictive computational approaches for solving drug solubility and formulation problems. Prior to Patheon, he was a Solutions Architect at Schrödinger, worked for Bend Research, and was an Associate Research Fellow at Pfizer. He earned his PhD in Chemistry from The Pennsylvania State University and his BS in Chemistry from Washington State University. 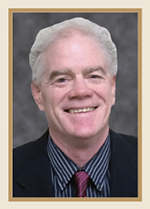 Dr. Tom Reynolds is Principal Scientist at Patheon ORP, where he is responsible for development of a drug formulation and solubilization technology platform that delivers formulation options using computational methods. He has over 20 years of experience in research, development, and management of programs in nanotechnology, crystal growth, formulation, and computer modeling. He earned his PhD in Chemistry from Oregon State University. 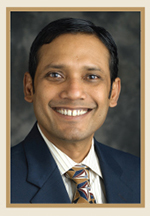 Dr. Sanjay Konagurthu is Director, Formulation and Process Development at Patheon, where he is responsible for developing formulations and manufacturing processes for products that cover a wide range of therapeutic areas. He has extensive experience in oral solid dosage forms, including solubility enhancement and modified release. He earned his BS from the Indian Institute of Technology, Madras, and his PhD from the University of Colorado, Boulder, both in Chemical Engineering. 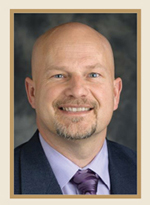 Dr. Marshall Crew became the VP, Global PDS Scientific Excellence at Patheon after Agere Pharmaceuticals (where he was the President, CEO & Founder) was acquired by Patheon in 2015. Dr. Crew has devoted his career to improving oral bioavailability, developing innovative technologies and approaches for the delivery of poorly soluble drugs and then managing their application to achieve client success. His scientific expertise includes formulation design and development, solid state characterization of drug substance and product, and computational modeling (predicting shelf-life and pharmacokinetic and bioavailability for oral, devices and parenteral delivery). He earned his PhD in Physical Chemistry from Oregon State University. 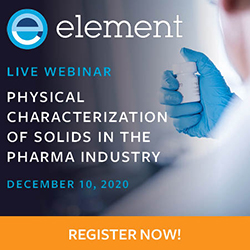