Promethazine is a derivative of phenothiazine that blocks histamine H1 receptors.1 It is commonly used to treat a variety of allergies and allergic reactions.2 This medicine is also used to control dizziness, motion sickness, nausea, and vomiting.3-5 The dosage of promethazine comes in three forms: syrup, tablet, or elixir. Usually, 25 mg of promethazine is taken orally every 4 to 6 hours when used to treat nausea and vomiting.2 The delivery of promethazine via digestion can be problematic for someone who has undergone chemotherapy, anesthesia, or surgery due to nausea and emesis. Therefore, it is common for nauseated patients to take promethazine via direct intravenous injection or suppository. These inconvenient delivery methods can be avoided by the production of quick-release, orodispersible promethazine tablets.

Drug delivery by absorption through oral mucosa offers advantages such as direct absorption into the systemic circulation, thus avoiding presystemic elimination via the gastrointestinal tract.6 The sublingual mucosa is relatively permeable due to its thin membrane and large veins, allowing quick absorption and bioavailability of drugs due to high blood flow. However, sublingual delivery is not appropriate for sustained delivery formulations.7 When delivering orodispersible promethazine tablets, the sublingual mucosa is a well-suited area for fast release, bringing rapid bioavailability of the drug.8-11

To overcome the aforementioned delivery challenges, a formulation of orodisperisble tablets (ODT) at three different compression settings (low, medium, and high) have been designed and characterized for friability, hardness, wetting time, disintegration, and in vitro dissolution. In order to determine the effective formulation and compression setting for manufacturing of rapid release of ODT promethazine tablets, these parameters were statistically analyzed.

A simplex lattice design was used in order to develop response surface and contour plots.12 The amount of lactose (A), camphor (B), and mannitol (C) were selected as the independent variables. The three variables were tested at three different levels – low, medium, and high-compression settings. Disintegration time (Y1), percent release at 30 seconds (Y2), and percent release at 1 minute (Y3) were all used as dependent variables.

Preparation of Tablets
Tablets were made using a direct blend and compression method with ¼-inch standard concave tooling. For each formulation, the tablets were made using three different compression forces – low, medium, and high of ~5 kN, ~10 kN, and ~20 kN, respectively. The batches were then characterized, according to USP standards for variability of the tablet dimensions and weight, friability, hardness, disintegration, and dissolution times.13,14

Friability
Friability was tested by weighing each tablet, then setting the Friability Tester Model FTV-2 (Dr. Schleuniger Pharmatron, Switzerland) at 50 revolutions per minute for 1 minute. The largest piece of the remaining tablet was weighed to determine percent loss.

Hardness
Each tablet was aligned in the center of the VK 200 Tablet Hardness Tester (Varian, USA), and the hardness was recorded in kiloponds (kp).

Wetting Time
Wetting time was studied using a published method.15 In brief, a crude filter paper of 10-cm diameter was placed on the bottom of a 10-cm diameter Petri dish, and 10 mL of water containing methylene blue was added. Each tablet was carefully placed in the petri dish, and the wetting time was recorded when the water had reached the upper surface of the tablet.

Dissolution
Release of the drug was studied for each batch using Vision Classic 6 (Hanson, USA) USP Dissolution Apparatus II in 900 mL of phosphate buffer release medium pH 6.8 at 37±0.5ºC with paddle speed at 100 rpm.16 3-mL samples were collected at predetermined time points (0, 0.5, 1.0, 2.0, 3.0, 5.0, and 10.0 mins) and replaced with 3 mL of medium. The sample was filtered using a coarse filter paper to remove any particulates, cooled at room temperature, and promethazine content determined by absorbance at 253 nm.

Statistical Analysis
Simplex lattice matrix was utilized for analysis of three formulation variables at three levels and their effect on dependant variables. All data was obtained as a mean of at least three experiments ± standard error. The differences in effect on dependant variables of the formulations were studied by two-way ANOVA using DesignExpert 8.0 software to obtain regression fit and surface response graph. 5% significance level (p value ≤ 0.05) was utilized for all statistical analyses.

In order to understand the effect of excipients on the properties of the tablets, six various formulations were designed for testing tablets containing various amounts of lactose, camphor, and mannitol. The effect of the formulation composition has been studied by assessment of physical parameters of the tablets – friability, hardness, wetting time, and disintegration time.

The hardness for each ODT formulation increased with increasing compression setting. However, ODT 2 showed only a slight difference between medium (5.53 ± 0.15 kP) and high (5.53 ± 0.27 kP) compression tablets. The steepest increase in hardness was displayed with ODT 1, and the most gradual increase was seen with ODT 4. 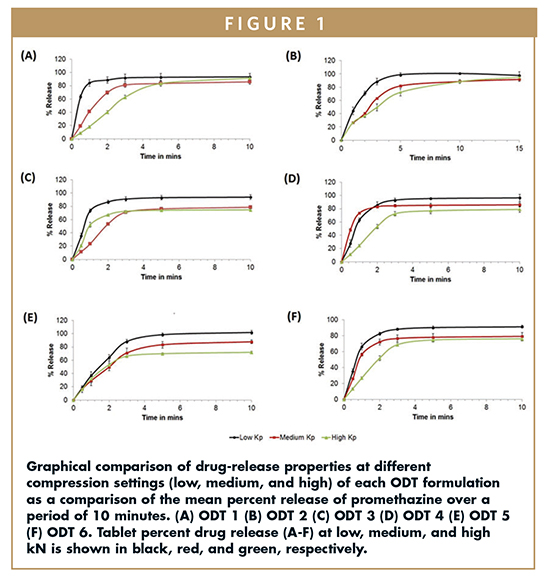 In order to understand the effect of the formulation variables (A, B, and C, Figure 1) on the release of the drug from the tablet, the dissolution was studied in vitro. This study showed a general trend in that the low kN tablets released first, followed by the medium kN tablets, and high kN tablets released last. 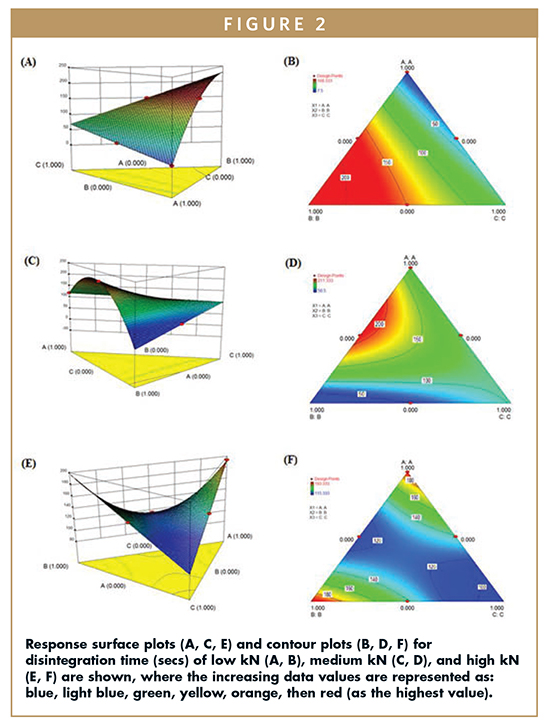 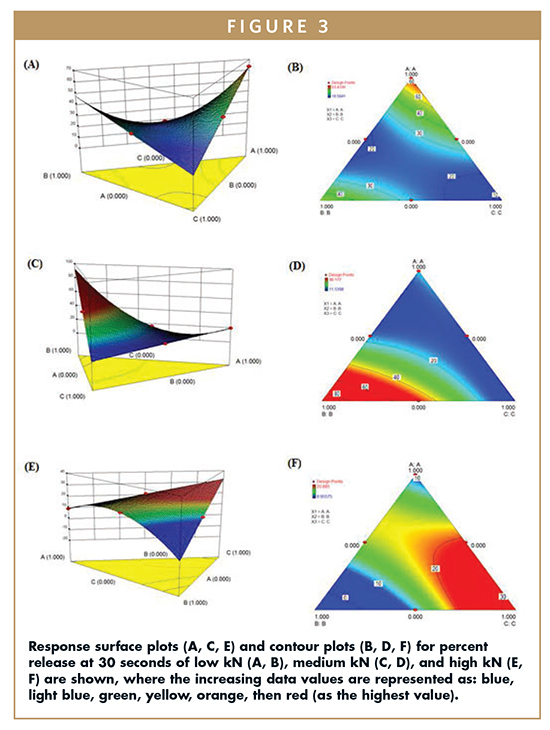 The effect of combining all of the formulation components were computed, and the data for ODT 1 shows highest rapid disintegration with highest percentage of drug release at 30 sec and 60 sec. Interestingly, compression of the tablet also plays role, where ODT 4 showed the shortest disintegration time with highest percentage of drug release as compared to other formulations at medium compression setting. At the highest compression settings, ODT 5 had the most rapid disintegration time, and ODT 3 showed the most rapid release. This may be due to increased formation of tight granules in the tablet at high compression, resulting in prolonged and more variable release.

The optimal characteristics of fast-release, orodispersible promethazine tablets in this study are described as: weight, diameter, and thickness and were within USP range below 5% RSD with appropriate tablet friability of less than 1% loss for all of the formulations. With hardness ranging from 4 to 5 kP, the tablets are expected to withstand the normal forces experienced during handling and transport. Short wetting and disintegration times, and at least 90% drug release within 5 minutes to allow fast disintegration in the mouth, promote adequate release of promethazine and time for absorption through the buccal mucosa. Disintegration time for the medium kN tablets was 4 to 18 seconds and higher for batches with higher punching pressure ranging between 1 to 4 minutes. The wetting time of the low and medium compression tablets show a trend in which the concentration of camphor has a positive impact, decreasing wetting time, whereas the concentration of mannitol has a negative impact on wetting time.

In this study, the formulations for delivery of promethazine have been successfully prepared and characterized. The importance of the punching pressure during the preparation process is considered as the contribution of the independent variables to the tablet properties may vary. Out of the six formulations considered in this study, ODT 4, made with a high punching pressure, is the most suitable candidate for orodispersible promethazine delivery with hardness of 4.73 ± 0.23 and friability of 0.39 ± 0.14% – both parameters are compliant with USP regulations, and a wetting time of 20.37 ± 4.97 seconds, allowing quick disintegration in the mouth. Most importantly, in vitro dissolution testing demonstrated rapid and sustained drug release of 90% over a 3-minute timespan.

The authors report no conflict of interest. The authors alone are responsible for the content and writing of the paper.

The authors wish to thank CoreRx, Inc. research and manufacturing departments for assisting with tablet manufacturing. We acknowledge the funding received from Florida High Tech Corridor.

Dr. Srinvias M. Tipparjau is faculty at University of South Florida College of Pharmacy working as Assistant Professor in the area of cardiovascular diseases, drug development, and innovation. Currently, he is focused on understanding the mechanisms for diabetes, arrhythmias, and heart failure. He directs research efforts and established a research team and funding for projects including drug development and formulation design using innovative technologies.

Anastasia Groshev is currently a medical doctorate candidate at the University of South Florida Morsani College of Medicine. Her work in research focuses on development of drug delivery forms for penetration of blood barriers and sustained release for treatment of brain tumors, Alzheimer’s disease, and glaucoma.

Danielle Dantuma is a Research Assistant at the University of South Florida College of Pharmacy. She is Operations Coordinator at the BRIDGE Pharmacy Clinic, Secretary of International Health Service Collaborative, and CIC Program Coordinator of the Student National Pharmaceutical Association chapter at USF.

Brian McMillan is the Vice President of Product Development and Co-founder of CoreRx, Inc. in Clearwater FL, and Adjunct Assistant Professor of Pharmacy at The University of South Florida.

Dr. Todd R. Daviau is the Founder, President, and CEO of CoreRx, Inc., bringing 27+ years of pharmaceutical experience and knowledge to the project. Prior to CoreRx, he served as VP of the Analytical and Pre-Formulation Laboratory for MDS Pharma Services and Strategic Analytical Team member with Guilford Pharmaceuticals, where he was involved in the development of Natrecor and Gliadel.

Matthew MacPherson is a graduate student at the University of South Florida, College of Engineering.

Dr. Yashwant Pathak is Associate Dean for Faculty Affairs at College of Pharmacy, University of South Florida in Tampa, FL. His areas of research include drug delivery systems and characterization in animal models.