In 2019, the immediate study of lung biology and respiratory viruses became a global priority with the advent of the COVID-19 pandemic. There was considerable pressure on academic researchers and the pharmaceutical industry to fast-track therapies to treat the critically ill, develop vaccines to control the spread of disease, and understand the basic biology of this devastating new virus.

Typically, it had taken 10-15 years to develop a vaccine before the pandemic, yet the pressure of a global crisis delivered multiple safe and efficacious COVID-19 vaccines within just 1 year. Consequently, the industry is now more receptive to innovative ways of shortening and improving the efficiency of the drug discovery process. Currently, only 1 in 10 drugs in clinical trials is ultimately approved for therapeutic use – the other 9 fail due to a lack of efficacy or safety concerns. One reason for such high drug failure rates is the limited ability of preclinical tests to predict human responses. More than a decade ago, a push toward incorporating more physiologically relevant in vitro assays into the drug discovery workflow began to address this.

The task of recreating a lung in the lab, however, is a fundamentally difficult one. Lungs are multi-cellular, with complex architecture. They provide the interface between the outside environment and our blood, and the process of breathing puts them under continuous mechanical stimulation. Dosing is also a challenge. Viruses, drugs, and chemicals arrive in our lungs as aerosols, so how do we accurately characterize and recreate this process? The predictive power of even the most sophisticated lung model will diminish if it is not dosed in a physiologically relevant manner.

Traditional models of the lung range from simple immortalized cells in culture, through complex in vitro models, like organoids, to an array of small and large animals. The most recent model type to enter the field is Organ-on-a-Chip (OOC). Here, primary human cells and tissues are cultured under physiologically relevant conditions to recapitulate an organ’s in vivo phenotype and function. Before OOC, a primary human bronchial epithelial cell model was the most physiologically relevant model available. Cells cultured at an air-liquid interface for 14 days up to 3 months could produce mucus and beating cilia.1 However, since 2010, when the Wyss Institute developed the first lung-on-a-chip model, the pace of lung-on-a-chip development has been rapid.2 These complex in vitro models now offer a wealth of new possibilities over and above traditional approaches for modelling disease, profiling drug ADME, and predicting toxicity.

To recreate the complex air-liquid histoarchitecture of the lung, most lung-on-a-chip models feature epithelial and endothelial compartments separated by a porous membrane. Cell culture medium is usually fed to the endothelial side, playing the role of blood, whereas the epithelial compartment remains open to the air to simulate the in vivo airway. Lung epithelial cells represent the foundations of the model; however, additional cell types can be added (eg, endothelial cells to mimic vasculature, fibroblasts, smooth muscle cells, tissue-resident and circulating immune cells) to recreate the function and phenotype of the lung more accurately. These cells may come from healthy donors or those with lung disease. As a final layer of sophistication, fluid shear created by flowing the cell culture medium and mechanical stretching provide cells with biochemical and mechanical signaling cues similar to those experienced in the body.2

Like all models, different lung-on-a-chip systems have their pros, cons, and limitations. Before selecting one, it is important to ensure a fit versus context of use. Two configurations of lung-on-a-chip have emerged: the microfluidic “chip” and the insert-based system. Each presents its opportunities and challenges.

As exemplified by Huh et al, microfluidic “chip” solutions require cell seeding into a pair of microfluidic channels separated by a porous membrane.2 The porous membrane is formed from an elastomeric material which, when stretched, provides mechanical stimulation. Upper and lower channels hold lung epithelial and endothelial cells, respectively. In some instances, cell culture medium flows through the lower channel to mimic blood flow. The cells in each channel form polarized monolayers that enable the transport of species across the barrier to be studied. An advantage of this configuration is that the application of mechanical stimulation enhances lung phenotype over non-stimulated controls, whilst the limited thickness of the “chip” makes it well suited to analysis via in situ imaging.2 However, there are also drawbacks to this approach. Set-up is relatively complex, which limits the number of “chips” that can be run simultaneously and therefore throughput is low. Further, in encapsulated microfluidic devices, it is challenging to seed cells at the beginning of an experiment and collect cells at the end, requiring experience, specialist training, and a steady hand. Moreover, these configurations are not easily interfaceable with lab automation or aerosol dosing platforms, and valid concerns surround the extent of drug absorption into the polydimethylsiloxane (PDMS) elastomeric “chips”.

Insert-based lung-on-a-chip systems take a different approach, building upon standardized and scalable industry-proven technology through the introduction of fluid flow. These models utilize cell culture inserts with a porous membrane base (eg, Transwells®) that have been widely used for barrier model studies (such as gut, lung, and skin) under static conditions for decades. In these systems, lung epithelial cells are seeded into the upper apical compartment at the air-liquid interface, with the option to add endothelial cells into the lower basolateral compartment. By adding flow to one or both compartments, it is possible to recreate shear forces that analogously stimulate cells to mechanical stimulation. Lung tissues that closely match the in vivo phenotype are also created, but unlike “chips”, inserts can easily be accessed (for example for washing to avoid mucus build-up or examining barrier integrity) and removed for use in commercial aerosol testing systems. Inserts do not absorb drugs; access for imaging is easy; and they offer a plentiful supply of cells/culture medium for comprehensive biochemical analyses.

Additionally, organs within the human body do not operate in isolation; they operate as a system. Multi-organ OOC models offer the potential to perform systemic interaction and organ-to-organ crosstalk studies (such as ADME), which previously required animal studies. Whereas animal studies have the disadvantage of inter-species differences generating misleading results, OOC can offer human-relevant insights for better decision-making. Organs grown in vitro on “chips” can be made to work in these powerful multi-organ OOC models, but the insert-based approach is much more amenable to linking organs, and therefore also promotes the end goal of a complete human body-on-a-chip.3 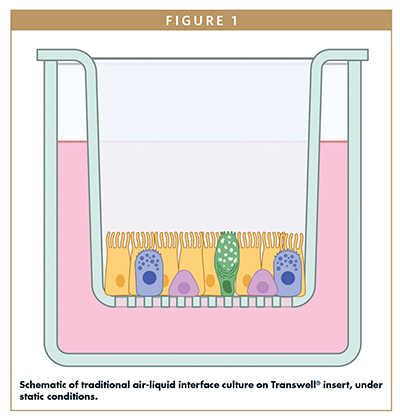 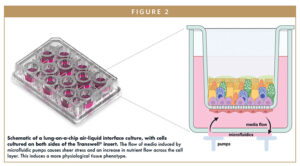 In alveolar models, fluid flow uniquely stimulates alveolar type I and II cells to produce alveolar sac-like structures not observable in traditional static culture or other lung-on-a-chip models (Figure 3). ACE2 receptor expression and the potential to include immune cells in both the apical and basal side of the system means these models are compatible with SARS-CoV-2 infection and immune response studies (Figure 4). 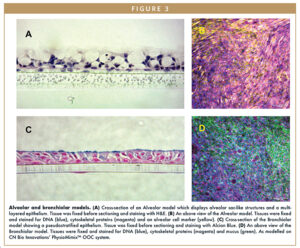 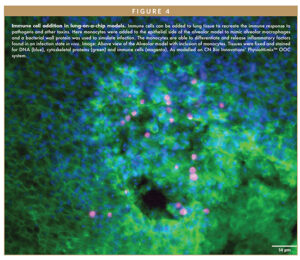 Lung-on-a-chip systems, therefore, can recapitulate significant aspects of human lung physiology and pathology, but it is important not to compromise the predictive value of these models by dosing drugs, viruses, and other species in a non-physiologically relevant manner. Applying samples in a solution may be simple but is far from the in vivo situation. To deliver representative vapors, aerosols, smoke, dry powders, and microorganism- containing droplets into lung-on-a-chip systems requires them to be integrated with well-characterized dosing apparatus. This can be achieved through device adaptation, ie, by modifying the output of the apparatus to direct into either the channels of a microfluidic chip system or the apical compartment of an insert system. A simpler approach involves removing inserts and installing them into standard dosing apparatus.4 By combining phenotypically relevant lung models with industry-proven dosing apparatus and dosimetry, the translatability of data derived from short-term exposure and permeability studies should improve.

Ultimately, the goal of OOC technology is to improve the translatability of data between the lab and the clinic. Through a lung-on-a-chip approach, it is possible to recreate the histoarchitecture, phenotype, and function of bronchial and alveolar areas of the lung. Different lung-on-a-chip configurations provide researchers with the opportunity to select the right system for their application, context of use, and throughput needs. These advanced in vitro tools model diseases like COVID-19, predict the human ADME properties of inhaled drugs, and identify potential toxicants, but to ensure data translatability between the laboratory and the clinic, it is crucial to dose these models with airborne species. Once the predictive power of these models becomes more recognized, their widespread adoption into preclinical drug development workflows has the potential to help deliver therapeutics to patients more rapidly. 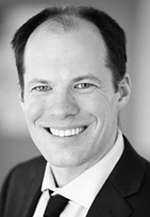 Dr. David Hughes is CEO of CN Bio Innovations, a leading OOC company that has developed single and multi-organ microphysiological systems that improve the accuracy and efficiency of drug discovery, including the PhysioMimix™ lab-benchtop instruments. He is also Principal Investigator on a $26-million US DARPA contract toward development of human in vitro multi-organ platforms and leads a €4-million EU FP7 program aimed at developing stem cell-derived models of human liver. Dr. Hughes graduated from the University of Oxford with a Masters in Engineering Science and Doctorate in Chemical Engineering. 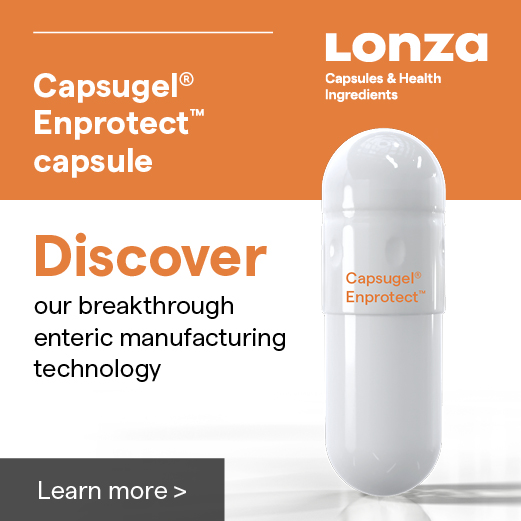