Oil-in-water emulsions, which are composed of oil droplets dispersed in an aqueous continuous phase, can provide unique solutions for overcoming drug solubility and stability problems. In general, emulsions have many practical applications in the agriculture, food, cosmetic, pesticide, and pharmaceutical industries.1 One of the uses of emulsions is to deliver active pharmaceutical ingredients (APIs) in topical, oral, nasal, ophthalmic, or injectable dosage forms. Although a number of lipid-based nanoemulsion pharmaceutical products have been marketed in the past 20 years, there are fewer examples of oil-in-water emulsion products. Examples include Diprivan® (propofol), an injectable anesthetic, and Restasis® (cyclosporin), an opthalmic drop for dry-eye syndrome.

Emulsions can be characterized as macro, micro, or nano. Macroemulsions are typically opaque in appearance, as the average particle size of the hydrophobic droplet in a macroemulsion is typically > 500 nm and thus scatters light. Microemulsions and nanoemulsions are obtained when the size of the droplet is typically in the range of 50 to 500 nm. In addition, emulsions in this size range can appear translucent or optically clear if the average oil droplet size is < 100 nm, as droplets in that size range no longer scatter light. Furthermore, emulsions with droplet sizes below 100 nm have the added benefit of aiding the drug to penetrate epithelial mucosol layers such as in the eye, skin, nasal, lung, GI tract, tumor, blood-vein, and blood-brain barriers.

The distinction between microemulsions and nanoemulsions relates to their thermodynamic stability. Microemulsions are thermodynamically stable due to the use of sufficient co-solvents and co-surfactants to prevent Ostwald ripening – essentially the coalescence of the droplets into larger particles. Ostwald ripening is the most frequent instability mechanism, although gravitational separation can also occur with larger particles.2 Nanoemulsions contain much less of the stabilizing co-solvents and co-surfactants, and as such are meta-stable and more susceptible to Ostwald ripening. In addition, nanoemulsions require greater kinetic formation energy, and are usually prepared using high-pressure homogenization or ultrasonic generators. Because of the undesirable side-effects caused by many solvents and surfactants (in fact, the FDA places daily intake limits on such ingredients), microemulsions are disadvantageous compared to nanoemulsions. This is also true when using an emulsion process to develop a liquid pediatric dosage form as many surfactants have a bitter taste.

A drug’s low solubility often presents a serious challenge to developing bioavailable dosage forms. This challenge can be exacerbated for drugs with chemical stability issues when solubility-enhancing approaches utilize excipients that are incompatible with the drug substance. To overcome these challenges, many technologies have been developed, including particle size reduction to nanometer-size drug crystals with greater surface area for dissolution, production of amorphous solid dispersions for reducing the energy required for dissolution, and lipid-based drug delivery systems for dissolving a hydrophilic drug in either a lipid or oil phase. However, not all of these technologies are suitable when the drug is both poorly soluble and chemically unstable. In particular, the use of nanoemulsions is a growing area due to their ability to formulate poorly soluble drugs for multiple routes of administration – drops or creams for topical products, suspensions for pediatric products, and sterile, parenteral forms for injection, and to potentially shield the active ingredient from chemical degradation.

EmulSolTM is Ascendia’s proprietary technology for production of novel oil-in-water nanoemulsions. Despite their advantages, nanoemulsions have certain limitations. The oil droplet particle size may increase over time via Ostwald ripening – this physical instability can lead to loss of optical clarity and potentially a decrease in drug solubility as the interfacial surface area decreases. In order to achieve physically stable nanoemulsions, long-chain triglyceride oils are sometimes employed, but typically require the use of organic cosolvents or toxic co-surfactants (eg, Cremaphor). The addition of co-solvents and co-surfactants significantly reduces the safety and tolerability profile of the pharmaceutical formulation. These excipients may not be suitable for pediatric administration, may cause injection site pain and irritation, and are becoming less acceptable in general for use in pharmaceutical formulations.

Ascendia’s EmulSol technology produces stable, optically clear nanoemulsions without the use of organic solvents and with minimal use of cosurfactants using a high-pressure homogenization process. By selecting specific long-chain triglycerides in combination with an ionizable surfactant, Ascendia has eliminated the use of organic solvents in its formulation approach. EmulSol formulations are prepared using a conventional homogenization process, but with a proprietary combination of oils and surfactants (patent pending) – the resulting suspension of oil droplets in the water phase is physically stable and safer for administration. The elimination of solvents from the formulation reduces injection site irritation and is more acceptable for pediatric products; and the minimization of surfactants improves the safety and chemical stability of the resulting nanoemulsion formulation. Ascendia has used its EmulSol technology to formulate its lead pipeline product – ASD-002 – a novel injectable form of the anti-thrombotic drug clopidogrel.

Clopidogrel, first approved in 1997, was co-developed and co-marketed (as Plavix®) by Bristol-Myers Squibb and Sanofi. Clopidogrel is one of the leading anti-thrombotic drugs in use today, and as recently as 2011 was the second best-selling drug product in the world, achieving over $7 billion in sales that year. Clopidogrel is indicated for Acute Coronary Syndrome (ACS), and also following recent myocardial infarction, stroke, or in established peripheral arterial disease. In particular, ACS refers to unstable angina or when blood supply to the coronary arteries becomes suddenly fully or partially blocked (ie, heart attack). When a patient presents with a suspected coronary event, a 300 to 600 mg loading dose of clopidogrel is frequently administered. However, the only commercially available dosage forms of clopidogrel are oral tablets in 300 mg and 75 mg strengths – not ideal for administration in an emergency setting. Also, when delivered orally, there is a significant delay in the time required for the medicine to become effective – although clopidogrel is rapidly absorbed, the time to reach peak concentration and therapeutic effect can require several hours. Therefore, in an acute, emergency setting, a more rapidly acting, injectable clopidogrel dosage form is desirable.

The barrier to developing such a product is due to clopidogrel’s challenging solubility, physical form, and chemical stability properties. Clopidogrel is a weak base with a pKa of 4.5, and it is practically insoluble in water at neutral pH (the oral tablet composition uses the bisulfate salt form of clopidogrel, which is soluble at gastric pH, but not suitable for injection). Clopidogrel free-base is a semi-solid, viscous, oily form, thus presenting difficulties in storage, dispensing, and processing. Moreover, the free-base form is chemically unstable and undergoes both hydrolysis and oxidation. In addition, clopidogrel is a chiral molecule: only the senantiomer is biologically active, and chiral conversion to the r-enantiomer can easily occur in a liquid dosage form.

There have been development efforts to formulate and clinically test an injectable clopidogrel dosage form. Ligand licensed an injectable clopidogrel formulation (developed by Prism using Cydex’s cyclodextrin-based technology platform) to The Medicines Company in 2011.3 Other injectable formulations have been studied clinically.4 And the patent literature also discloses attempts to formulate stable parenteral dosage forms.5 However, despite the development efforts to date, and the clear unmet medical need, an injectable form of clopidogrel has not been successfully developed and approved.

Using its EmulSol technology, Ascendia has developed a novel oil-in-water nanoemulsion formulation of clopidogrel. The goal of the development program has been to demonstrate successful formulation of clopidogrel free-base in a nanoemulsion suitable for injection, having acceptable chemical and physical stability properties. Because the formulation contains no solvent, the risk of injection site pain is greatly reduced. And, even though the free-base is poorly soluble at plasma pH, when contained in the oil phase of the nanoemulsion, the clopidogrel drug substance becomes much more soluble as shown in Table 1. 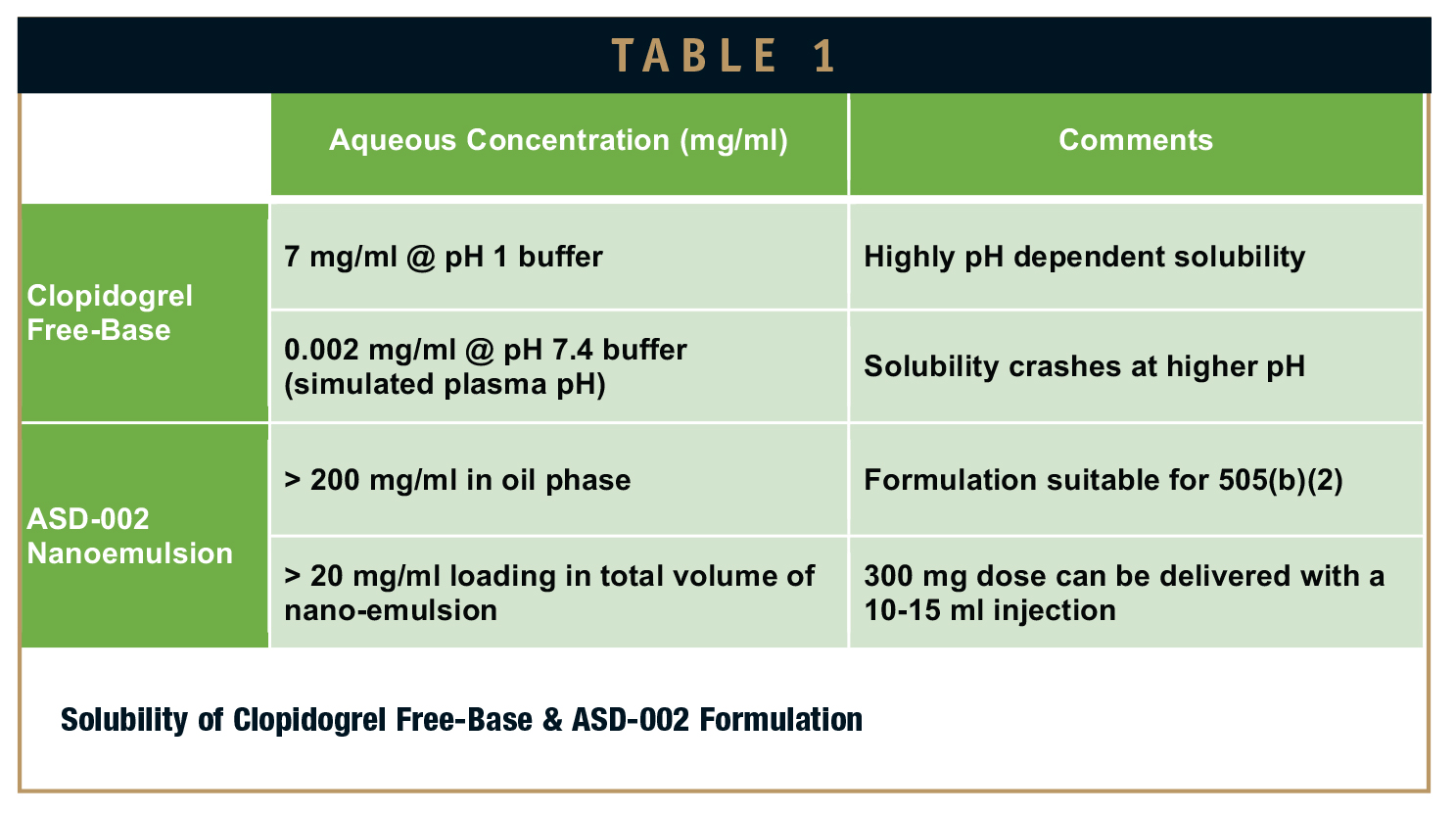 The ASD-002 nanoemulsion is prepared by high-pressure homogenization using Ascendia’s proprietary excipient blend. The mean droplet size for the clopidogrel nanoemulsion is approximately 200 nm as shown in Figure 1. 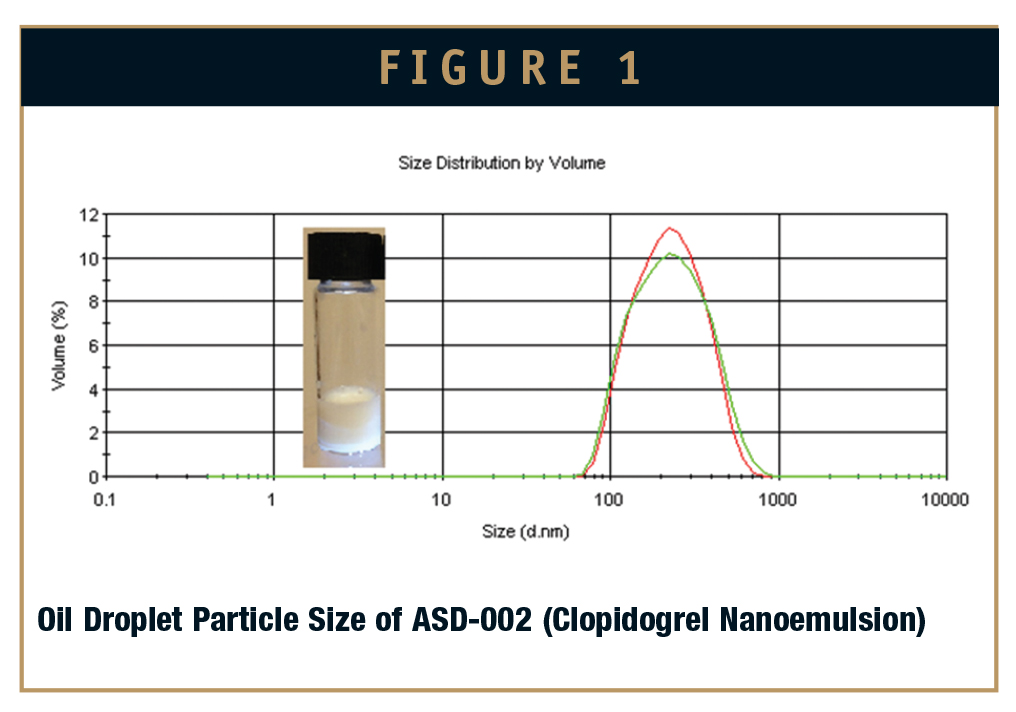 Another challenging aspect of this development program is the demonstration of chemical and physical stability. Clopidogrel has several degradation pathways, including oxidation (Impurity A), hydrolysis (Impurity B), and chiral conversion (Impurity C) as shown in Figure 2. Ascendia has investigated the degradation pathways of clopidogrel free-base and clopidogrel bisulfate in aqueous solution, and developed stability indicating analytical methods.6 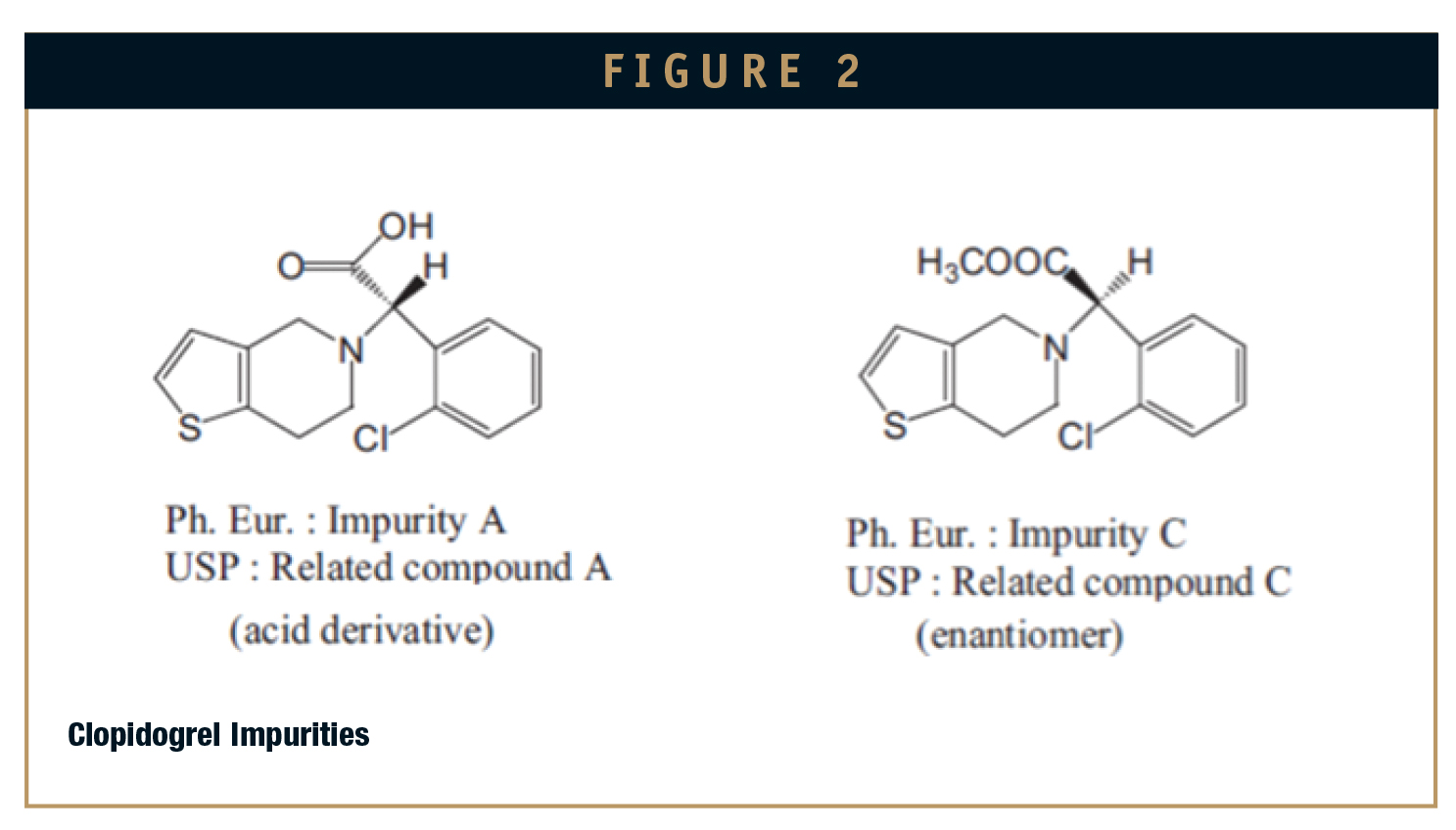 Ascendia has demonstrated physical stability of the formulation by showing minimal change in oil droplet particle size following either autoclaving the formulation, or a freeze-thaw cycle for the formulation – the mean particle size remains a consistent 200 nm. Chiral conversion to the r-enantiomer is the predominant chemical impurity. Ascendia has shown in accelerated stability studies that chiral conversion is kept within USP limits for sufficient time to provide a commercially acceptable product shelf-life. ASD-002’s stability profile has been compared to other aqueous-based liquid formulations (eg, cyclodextrin-based liquid forms) of clopidogrel and demonstrates superior chemical stability with respect to all three major impurities – chiral degradation, oxidation, and hydrolysis (Figure 3).7 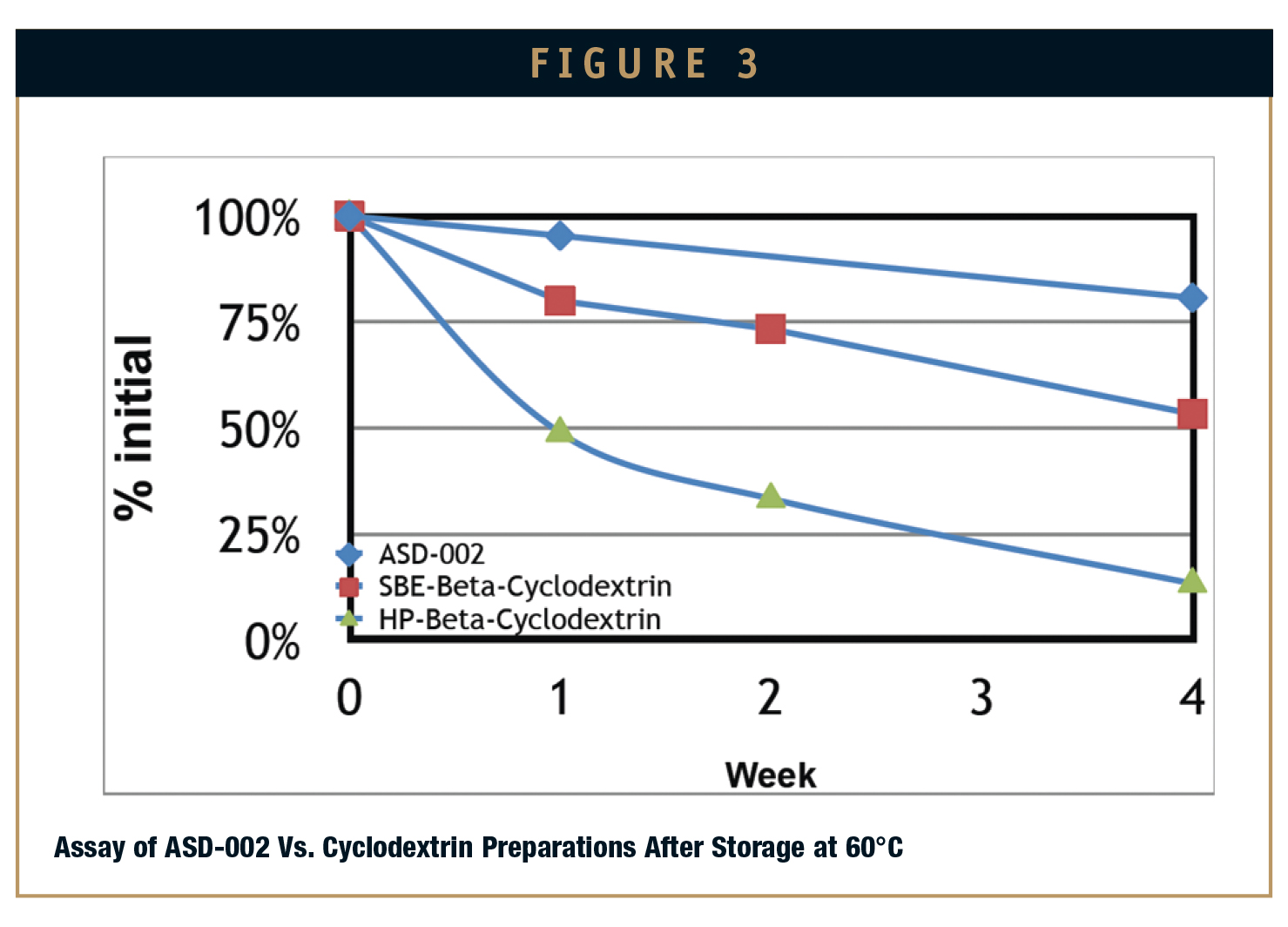 Nanoemulsions are useful in developing liquid formulations of poorly water- soluble drugs for oral or injectable administration. Oil-in-water nanoemulsions can also be used to stabilize drugs that undergo hydrolytic and oxidative degradation. These challenges have prevented development of a soluble, stable form of the anti-thrombotic drug clopidogrel in a suitable parenteral dosage form, despite the significant unmet medical need for such a product in treating acute coronary syndrome.

Using its EmulSol technology, Ascendia has developed a novel oil-in-water nanoemulsion formulation of clopidogrel whereby the free-base form of clopidogrel has acceptable solubility in the oil phase, and is protected from chemical degradation. Ascendia continues to explore further development and partnering opportunities for this unique product. 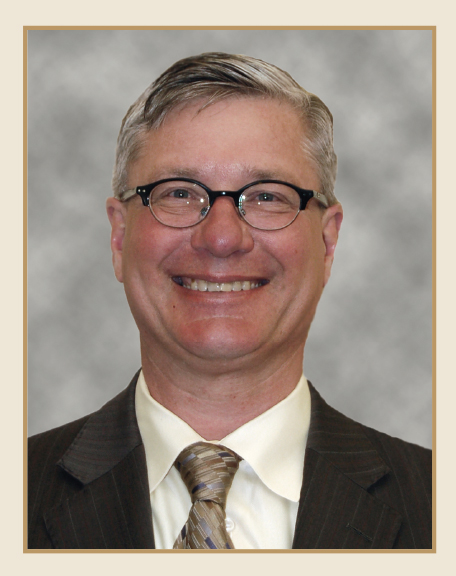 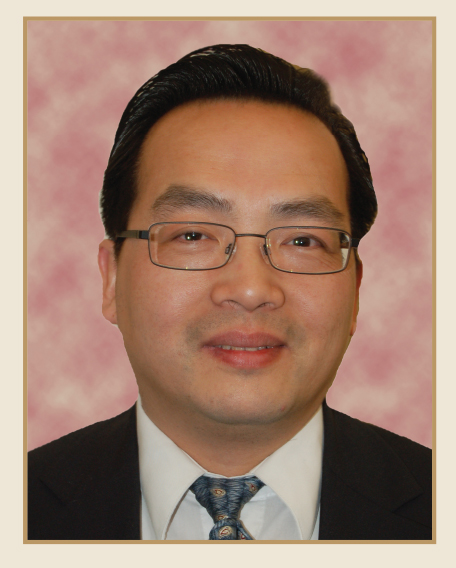