MICROBIAL PRODUCTION – Cutting-Edge inABLE® Technology: The Key to Cost-Effective Production of a Novel Antimicrobial Peptide With Potential for the Treatment of MRSA

Infections caused by antibiotic resistant bacteria are an ever-increasing threat to public health, creating an urgent, growing demand for the identification and development of new therapies. One class of compounds showing promise is the bacteriocins – short peptides produced by bacteria – which have demonstrated good activity against a number of human pathogens. The bacteriocins group includes epidermicin, a recently discovered novel antimicrobial peptide that has shown great potential during initial studies. However, epidermicin is produced in very low amounts in its native host, and synthetic production is prohibitively expensive. Biotechnology company Ingenza and scientists at Plymouth University School of Biomedical and Healthcare Sciences, supported by an award from the InnovateUK Industrial Biotechnology Catalyst scheme, are engaged in a collaborative project using proprietary inABLE® technology to develop an efficient, scalable microbial production system. This will enable larger amounts of epidermicin to be cost-effectively produced for further investigation.

Antibiotic resistance is an escalating problem, making the development of effective new therapies crucial. Bacteriocins – ribosomally synthesized antimicrobial peptides – have the potential to meet this need. Compared to the broad spectrum of classical antimicrobial agents, bacteriocins display a relatively narrow range of inhibition. This may be an advantage, as narrow spectrum agents, which target specific bacteria, are thought less likely to lead to the development of antibacterial resistance. Epidermicin, a peptide produced by some staphylococci, is a member of the bacteriocin class of compounds. This exciting new antibiotic rapidly kills methicillin-resistant Staphylococcus aureus (MRSA) and other bacteria, and offers significant advantages compared to existing antibiotics as it is more potent and non-toxic, and bacteria do not appear to easily develop resistance to it.

Epidermicin was originally discovered in a strain of Staphylococcus epidermidis during an independent research project into antimicrobial peptides performed at the University of Manchester.1 Characterization showed it to be a very potent, stable, 51 amino acid peptide that was effective against Gram-positive bacteria, such as staphylococci, streptococci, and enterococci.

Epidermicin exerts its effect by perforating the bacterial cell membrane. In standard laboratory assays, it does not kill Escherichia coli, a Gram-negative bacterium; however, if you try to make E. coli produce epidermicin internally, the membrane is attacked from within the cell, and the bacterium is destroyed. Often, bacteriocins are modified within bacteria, increasing their stability, affecting their mode of action and consequently making them more complicated to synthesize. In contrast, epidermicin is an unmodified peptide and, in theory, therefore more straightforward to make.

Industry, academic, and clinical experts were of the opinion that the best application for epidermicin would be nasal decolonization of MRSA, and this was investigated using cotton rats as a representative model. The rats were decolonized nasally for S. aureus, left for a couple of days, and then colonized with MRSA. Once colonization was established, the rats were divided into three groups; a) used as controls, b) treated with a vehicle or given a single dose of epidermicin, or c) administered epidermicin or mupirocin twice daily for 3 days. The results showed that a single high dose of epidermicin was as effective as six doses of mupirocin. With the initial in vivo data from an animal trial demonstrating the efficacy of epidermicin against MRSA, complemented by very good in vitro data, researchers could now justify taking the compound forward for further studies. However, epidermicin is only produced in very low amounts in its native host and synthetic chemical production of such peptides is prohibitively expensive; despite being unmodified, epidermicin is still not easy to produce using standard fermentation approaches. This was a big stumbling block for the use of this compound in clinical environments. 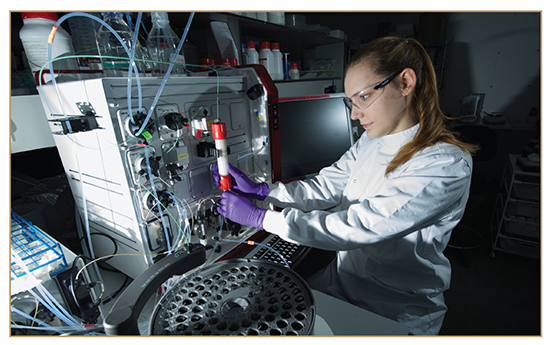 The development of any potential pharmaceutical preparation is only viable if it can be produced in a cost-effective manner on a large scale. A partnership with an industrial biotechnology company seemed the way forward, and this led to a collaboration between researchers at Plymouth University School of Biomedical and Healthcare Sciences and Edinburgh-based biotechnology company Ingenza, taking advantage of the company’s cutting-edge inABLE technology to develop an efficient, scalable microbial production system. 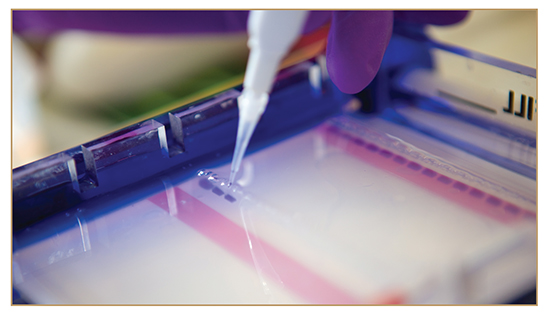 A NOVEL APPROACH TO PRODUCTION

Ingenza, a world leader in the application of industrial biotechnology and synthetic biology, is engaged in the development of bio-based manufacturing routes that are environmentally sustainable in the long term. The company has two potential approaches to developing production systems; using an alternative microbial host, such as yeast, or its inABLE technology. Yeast is frequently used as a production microbe in fields ranging from pharmaceuticals to biofuels, and the company’s robust, reliable, scalable fermentation capabilities made it a possible option for further investigation. It is not affected by bacteriocins, and would be expected to allow efficient production of the peptide as well as secretion into culture medium – which is a big advantage as it makes purification of the molecule easier – and can be scaled up to large volumes. The alternative route took advantage of Ingenza’s inABLE technology – a proprietary set of tools that enhances many critical aspects of recombinant protein synthesis, enzyme evolution, and biochemical pathway engineering for commercial applications – to deliver an innovative combinatorial approach. This approach significantly increases the efficiency with which large numbers of diverse genetic constructs can be combined, rearranged, and evaluated in vivo, helping to accelerate the successful commercialization of new biological entities and bioprocesses. 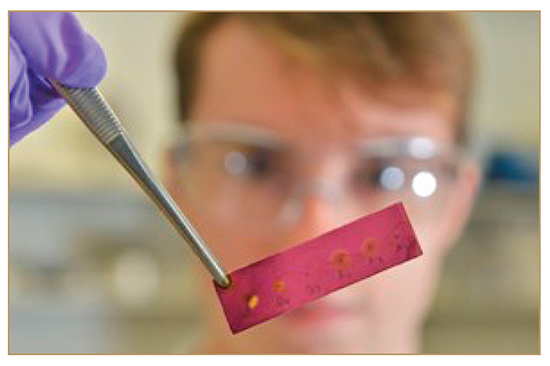 The technologies used by Ingenza to express difficult peptides and proteins were an ideal match for Plymouth’s research studies, and both groups were keen to develop a long-term relationship. After successfully applying for an IB Catalyst (Innovate UK/BBSRC) grant, the teams embarked on a collaborative project to develop an integrated synthetic biology approach for efficient production of epidermicin.

The researchers had two objectives; increasing the breadth of the antimicrobial peptide portfolio and enabling the cost-effective production of large amounts of epidermicin. Ongoing postdoctoral research at Plymouth has centered on expanding the range of similar antimicrobial peptides, using an informatics approach to try to find new entities with different activities. Scientists have already established that it is possible to modify these proteins, engineering their genetic structure – for example by truncation – to introduce novel activity. By changing the specificity, the protein’s activity could then be targeted toward other pathogenic bacteria. Although the initial focus was primarily on MRSA, epidermicin has now been shown to have potential for topical application for predominantly Gram-positive indications, such as impetigo, and also demonstrates very good activity against vancomycin-resistant enterococci (VRE). However, Gram-negative pathogens are actually considered more of a problem and, by modifying the structure of epidermicin, it may be possible to develop a peptide with activity against these bacteria. This would enhance the commercial viability of the product, as the market size for any single organism is quite small; with a broader range of activity against a variety of bacteria, its value increases considerably.

Plymouth’s rational design and informatics approach is complemented by Ingenza’s combinatorial methodology, a semi-randomized, high throughput production and selection process using inABLE technology. To obtain maximum benefit, epidermicin needs to be modified in many different ways and then screened to determine which of the genetic changes are the most effective. Here, scientists can learn from nature, copying successful processes in the laboratory, effectively mimicking biology to make random genetic mutations for screening and selection. Antibiotics are an ideal group of compounds to investigate in this manner. Bacteria can be colored to make visualization easier and applied to microplates to monitor the inhibitory effect of the antibiotic, enabling the most effective modifications to be identified.

Using inABLE technology, thousands of different changes can be engineered into the DNA sequence of epidermicin, changing the structure of the protein. Entire families of proteins can also be investigated, combining the production of multiple proteins in one system. This allows many more modified versions of epidermicin to be produced which, along with natural or modified versions of the family of proteins in which it exists in nature, are then tested against a range of pathogens. A single modified version of epidermicin or a combination of proteins with a greater breadth of applicability can be identified more rapidly, enabling a broader host range active against many different bacterial hosts – or with higher efficacy – to be developed in a shorter time frame, accelerating evolution.

Increasing the breadth of the antimicrobial peptide portfolio is just one part of the collaborative study. The other key aspect of the project is the cost-effective production of epidermicin, and Ingenza’s state-of-the-art technology is being used to develop an efficient, scalable microbial production system that can generate commercially viable amounts of the compound, as well as offering the flexibility to produce other antimicrobial peptides in the future. The ultimate goal is to establish a method that produces from tens to hundreds of milligrams of peptide per liter of culture grown. Based on the costing model prepared, yields of this magnitude should make the production of epidermicin a commercially viable prospect. By the time the current 2-year IB Catalyst (Innovate UK/BBSRC) grant funded project reaches completion, the aim is to be producing sufficient peptide to carry out preclinical toxicity formulation and stability studies. In time, this should then lead to the initiation of a Phase I clinical trial. The hope is that work that could conceivably have taken 10 years using conventional practices will be completed within the 2-year time frame, drawing the project to a perfect conclusion. 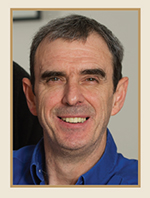 Dr. Ian Fotheringham earned his PhD in Molecular Biology from the University of Glasgow, UK, in 1986. He joined the NutraSweet division of Monsanto in Chicago, IL, constructing microbes to produce the Aspartame® sweetener. From 1993, he continued developing large-scale bioprocesses with NSC Technologies and Great Lakes Fine Chemicals. In 2003, he co-founded Ingenza, an Edinburgh, UK-based Industrial Biotechnology SME with a unique range of proprietary enabling technologies. Now a leader in microbial strain improvement, synthetic biology, fermentation, and bioprocess development, Ingenza works with industrial partners worldwide to commercialize state-of-the-art biomanufacturing processes. Dr. Fotheringham has published 35 papers and articles and holds 8 current patents. 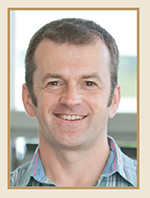 Dr. Mathew Upton is a Reader in Medical Microbiology at Plymouth University and Co-founder and Director at Spectromics Ltd, a University of Manchester spin-out that formed in April 2014. He earned his PhD in Microbial Ecology at the University of Newcastle upon Tyne. His expertise in medical microbiology developed during several postdoctoral projects, the last of which was with Prof. John Tagg in New Zealand, where he studied the genetics of antimicrobial peptide production in Streptococci. Dr. Upton took a Lectureship in Medical Microbiology at the University of Manchester in 2001, was promoted to Senior Lecturer in 2011, and moved to Plymouth in May 2013. He has authored over 60 peer-reviewed papers and holds 5 patents. Members of his group investigate bacterial pathogenesis and run a program of natural product screening for discovery of novel bacteriocins, antimicrobial peptides produced by bacteria. The lead compound, epidermicin, is being developed toward clinical use for prevention and therapy of skin infections, with commercially focused funding from a range of Research Council and other sources.