Cancer is the second leading cause of death in the US and is expected to surpass cardiovascular diseases as the primary cause of deaths over the next few years. According to estimates by the US medical research agency, the National Institutes of Health (NIH), medical expenditure for cancer in the US is expected to go above $150 billion by 2020, thereby putting even more financial pressure on an already overburdened US healthcare economy. Traditionally, surgery and radiotherapy have been the primary treatments for cancer, with anti-cancer drugs being used largely for metastatic cancers. Although chemotherapy has been successfully used for inhibiting cell growth throughout the past few decades, the side effects of chemotherapy have forced researchers to look for some alternative drugs for all types of cancer. The challenge for drug manufacturers has been how to effectively deliver the drugs to the appropriate disease site. While up until now most drugs administered have been injectables, the focus of drug manufacturers has now shifted to developing effective needle-free delivery systems in a bid to overcome this challenge, as driven by their patient-centric healthcare approach.

THE RISE OF THE INJECTABLES MARKET

Drug manufacturers’ strong emphasis on continuous improvements in cancer treatment has resulted in the development of novel drug delivery approaches, enabling the targeted administration of drug compounds. This transformation has pushed the growth of the oncology drug delivery market, which is expected to exhibit a compound annual growth of ~11% during 2016-2020 (Figure 1). While this growth will benefit all types of drug delivery mediums, oral drugs and inhalers are expected to be among the leading gainers. 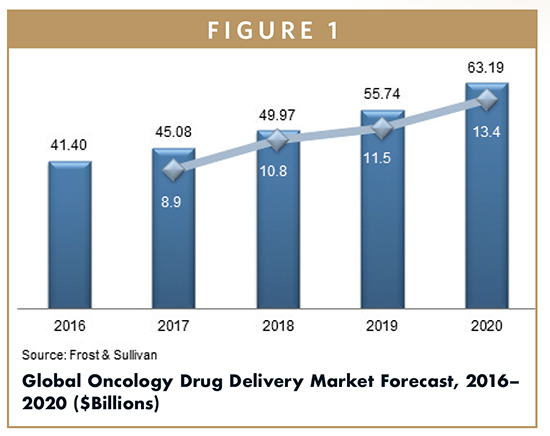 Despite strong growth in the number of oral drug prescriptions, several injectable drug companies have invested in resources to develop advanced drug delivery solutions. Although intravenous infusion drug delivery is expected to dominate the market throughout the next 5 years, subcutaneous, intra-dermal, and intramuscular modes of drug delivery are expected to gain a strong market hold, as 30-35 new products are likely to be launched by various companies.

In addition to traditional oral and inhaler methods, research on some innovative delivery methods, including nanogels and transdermal patches, is also underway, and scientists are evaluating the bioavailability of drug compounds on target sites when a drug is delivered using these mediums. The clinical effectiveness of these mediums will largely decide the market success of these new methods. 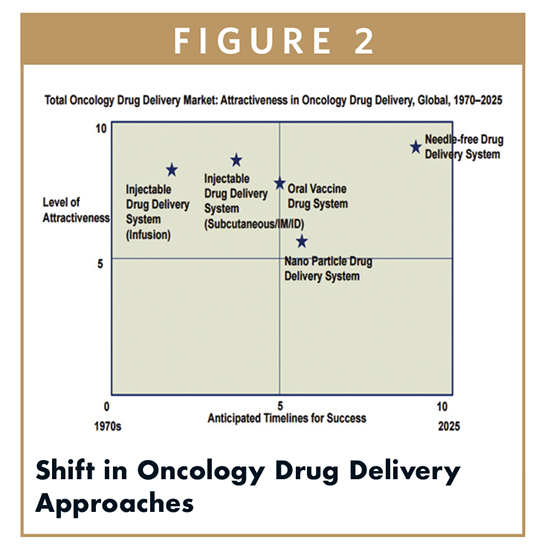 Though significant advances have been made in the field of drug delivery, patients still have a number of unmet needs, offering ample opportunities to drug companies. Researchers have devised various strategies to effectively deliver drug concentration to the target area, but these have met with limited success in the clinical development phase. At present, there are a few clear unmet needs:

Needle-Free Delivery: Supported by the home healthcare trend, patients are increasingly looking for drugs that can be easily self-administered and do not require much intervention/support from medical practitioners. Rising patient demands for painless and effective treatments (such as inhalable and transdermal mediums) have also forced companies to focus on related innovations.

No Targeted Cancer Therapy is Capable of Delivering More Than One Drug at Once: In addition, bioavailability of the drug compound at the target site remains a key challenge, whatever the delivery medium.

To overcome the existing technology limitations, a number of small biopharmaceutical companies have taken initiatives and are involved in the R&D of innovative cancer drug delivery methods. However, given several clinical hurdles and high financial costs, the rate of commercialization of the platforms developed by these companies is quite low.

A majority of technological developments are influenced by a gradual shift in cancer treatment sites – from exclusively healthcare center settings to self-administered therapy in home healthcare settings. Because of this, many researchers have focused largely on making drug administration more convenient from the patient’s perspective.

While researchers have highlighted and demonstrated the use of nanoparticles to safely deliver and release the drug compound to the tumor site, the commercial application of these methods in clinical settings remains to be effectively demonstrated. Despite this challenge, nanoparticles are being considered as one of the most likely options due to their ability to enhance the drug’s bioavailability. In the near future, this technology will enable physicians to apply fewer procedures to a similar site, which typically leads to chemo-resistance in cancer patients, a key reason in the failure of a majority of drug therapies. 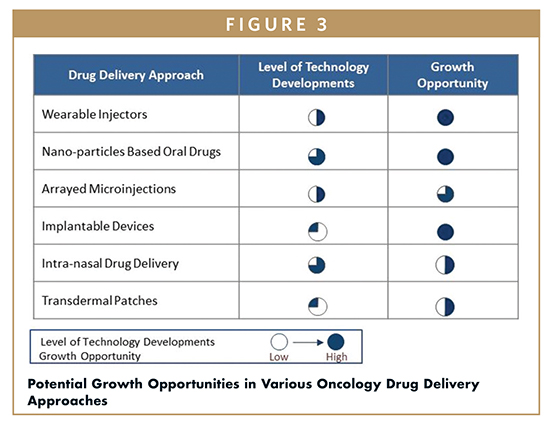 From a commercial point of view, a gradual shift is expected from injectable to oral drugs in the short-term and other drug delivery mediums in the long-term. However, the adoption of and the commercial success of these drug delivery mediums will largely depend on their ability to overcome existing challenges. The following are some of the breakthrough innovations.

Throughout the past decade, researchers’ focus has been to develop injectable products with self-administration ability, to enable anytime home healthcare. Using the same concept, wearable injectors have been developed, with the ability to deliver a large volume of a drug compound. Some drug manufacturers, such as Amgen and Roche, have started using these wearable injector solutions for their products (Neulasta Onpro and Herceptin SC, respectively).

Key companies who have made notable progress in this area include Becton Dickinson, West Pharmaceuticals, Insulet, Unilife, and Sensile Medical.

Nanogel or Nano Drug Delivery Vehicles for cancer drug carriers have been one of the most highlighted and accepted research topics because of their ability to absorb and deliver a wide variety of compounds. Although there have been significant developments on this front, the bioavailability of drugs has not been satisfactory in all cases. Hence, physicians prefer injectables for faster recovery. If nano-drug delivery is proven to be successful, oral forms of drugs can become more effective.

Furthermore, designing nanoparticles using computation modeling has shown some strong promise and is another opportunity area for innovation. A number of research activities using computation modeling are being carried out to simulate the distribution of drugs and nanomaterials. So far, there have been a few moderately successful commercialization efforts on this front. Based on commercial outcomes so far, nanomaterial-based drug delivery systems are poised for strong growth throughout the next 3 to 5 years.

Arrayed Microinjection is another interesting approach that holds significant potential in oncology treatment, on account of its ability to effectively deliver drug compounds to targeted cells. Presage Bioscience has been successful in demonstrating the use of microinjection platform technology in oncology dosing, and it has already been granted a patent for its device based on arrayed microinjection technique and quantitative analysis methodology. The platform enables the placement of multiple drug compounds directly to the tumor site. This allows doctors to directly assess the result of multiple drug compounds on tumor cells without having to worry about bioavailability, metabolism, or excretion issues. The platform is being used and tested in various clinical conditions. Early results in clinical settings from the platform have been successful, and the company has already signed strategic partnerships with Celgene and Takeda pharmaceuticals.

Another emerging approach is implantable drug-release platforms for intra-vesical drug delivery. Although a majority of products based on this technology are still in the R&D or trial phase, considering the current challenges with other forms of drug delivery mediums, this approach holds significant potential. Key companies in this area include Taris Biomedical, Endo Pharmaceuticals, Axxia Pharmaceuticals, and Cirtec.

Currently, breakthrough pain (BTP) or severe pain in cancer patients is targeted through the intra-nasal route of drug administration. BTP is highly prevalent in certain cancer patient populations (40% to 80% of the patients with advanced cancer). Some drugs, such as Fentanyl and Lazanda, which use intra-nasal routes, have been found to be efficacious in cancer patients. Research efforts are also focused on developing nanoparticle-based drugs to be delivered using an intra-nasal drug medium, with lung cancer and brain tumors being the key disease targets. If successful in clinical safety assessments, this method holds significant commercial potential, as lung cancer is one of the most common types of cancer identified in new cases (~17%).

Overall, a strong movement from injectables to other drug delivery mediums is anticipated, driven by increasing emphasis on improving efficacy of anti-cancer agents, reducing side effects, and adopting patient-centric home healthcare approaches. A strong shift is anticipated in therapy selection approaches, and ease of administration will also be considered along with effectiveness in prescription decision-making.

Short-term growth in the oncology drug delivery market can be achieved by investing in the injectable segment of the market. However, alternative forms of targeted drug delivery, such as niosomes and antibody targeted nanoparticles, are expected to be in high demand in the long-term. During 2015-2016, ~50% of the total oncology drugs approved by the FDA were oral cancer drugs. In the long-term, Frost & Sullivan expects this trend to continue. However, given the pricing pressure on drug manufacturers and HCPs, the high cost of these systems might be a limiting factor.

For the nasal route of drug delivery, Frost & Sullivan expects a high growth in the short-term for applications in cancer pain management. However, first-line therapy in pain management is still an unmet sector and is expected to remain so for the next 2 to 3 years. Also, microneedles or dermal patches are likely to make up a high market share in the more distant future, depending on their clinical success.

Furthermore, the use of informatics, computation modeling, and visualization technology is expected to increase, as companies will look to use different AI-based simulation models (for all types of drug administration methods) to limit the chances of last stage failure of their products. Frost & Sullivan expects some strong movements in this market segment throughout the next 3 to 4 years. Key companies to watch in this space are Schrodinger, Fustibal, CFDRC, and Turbine.

While this change represents a huge opportunity for small research-focused organizations, it also offers an opportunity for drug manufacturers to align themselves with this technology shift and to gain easy traction from doctors and patient groups. For contract manufacturers, early adoption of this shift in production technology will be essential. As of now, some large CMOs, such as Patheon, have already taken some initiatives on this front, and other mid-size and small CMOs are expected to follow the trend. 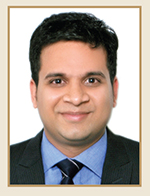 Piyush Bansal is a Senior Industry Analyst for Frost & Sullivan’s Life Sciences practice. He has diverse expertise within healthcare IT and life sciences with a strong focus on drug discovery, healthcare informatics, and genomics. His expertise includes market opportunity assessment, technology assessment, product launch and geographic expansion plans development, growth strategy formulation, and advanced data analytics. To supplement his expertise, he also has broad-ranging industry experience in varying sectors, where he has established long-standing working relationships with leading industry participants in areas such as pharmaceuticals, clinical trials, healthcare IT, and genomics. Mr. Bansal earned his BTech (Biotechnology) from Rajasthan University, India.