Freeze-drying or lyophilization – which is used to convert solutions of biopharmaceuticals into solids by removing the solvent, typically water, for the purpose of improving long-term storage stability – poses challenges in scale-up from the laboratory to manufacturing.

Lyophilization is one of the most expensive pharmaceutical unit operations, with overly conservative freeze-drying cycles, resulting in long processing times that increase the cost of production. Long lyophilization cycles are also less robust, with an increased potential for equipment failure. Freeze-drying cycles should be optimized to minimize drying time without adversely affecting product quality. Lyophilization runs that affect cost include plant capabilities, as well as raw and primary packaging materials. Full scalability between laboratory and production lyophilization units allows for the development or optimization of freeze-drying cycle parameters that yield significant cost savings.

For example, scalability between the pilot lyophilization unit of the pharmaceutical development services (PDS) department at Patheon’s site in Ferentino, Italy, and the LyoMax units located in the site’s good manufacturing practice (GMP) area was established using the following steps for maximum efficiency:

-Comparison of the technical specification of the freeze-dryers

Performance of laboratory and production units must be very close in terms of shelf and condenser minimum temperature, shelf and condenser cooling time, ultimate vacuum, vacuum pump down capacity and shelf temperature uniformity. Based on Patheon’s experience, the surface area of the condenser, shelf area, and the size of the laboratory and production units’ condenser opening must closely correlate to obtain acceptable scalability.

Shelf temperature mapping with no load was performed to verify the uniformity of temperature across the shelves. A star pattern model with temperature probes inserted inside the copper plate at the four corners and in the middle of each shelf was used. Temperature profiles are shown in Figure 1. 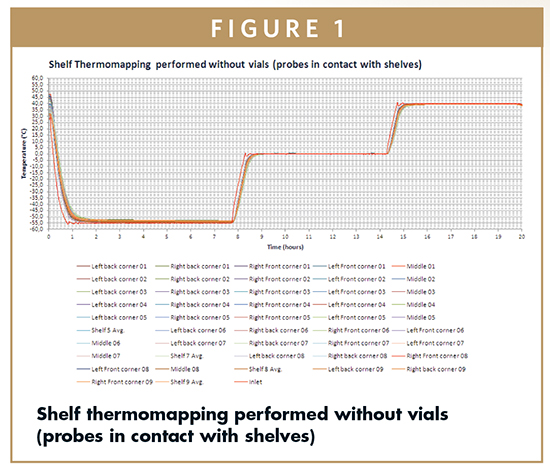 Temperature mapping was then repeated with a lyophilizer fully loaded with vials containing a placebo solution (Figure 2). 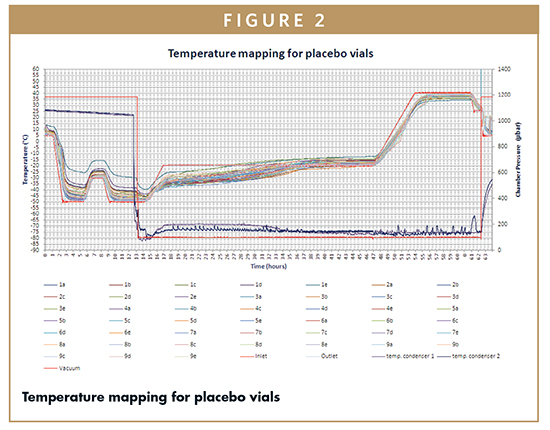 Thermocouples were placed inside the vials using the same star pattern model consisting of four corner vials and one center vial for each shelf used when mapping the empty shelves. The probed corner vials were placed as closely as possible to the corner of the lyophilizer shelf within an exterior row of vials. 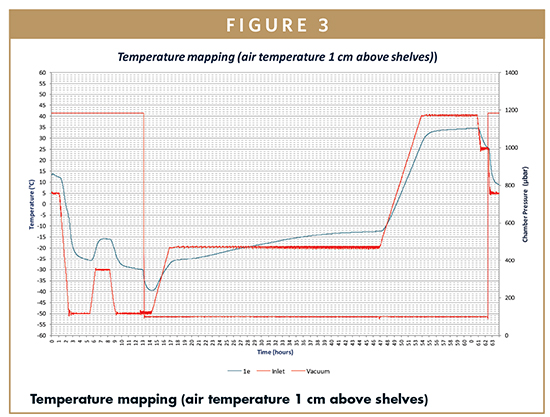 During inspection, vial location by tray was maintained, making it possible to determine the approximate shelf location for any vials rejected for improperly formed cakes.

Air temperature above the shelves was also measured to investigate the effects of radiation. While conduction is responsible for heat transfer from the shelves to the bottom of the vial, radiation is responsible for heat transfer from the walls and the door of the lyophilizer. Radiation is more pronounced in lab units, resulting in the “edge effect,” where edge vials dry faster than center vials.

Heat transfer uniformity can be improved by introducing an inert gas, such as nitrogen. Gas molecules facilitate heating of the container walls and heat conduction through the container, which increases the amount of heat applied to the product. 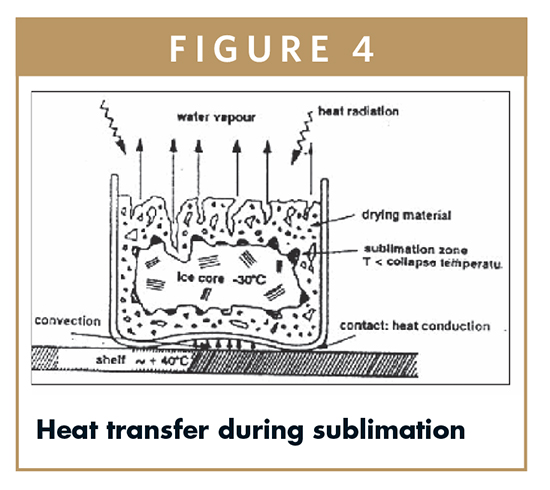 In these tests, ISO 10R vials were filled with 5 mL of water for injection (WFI), loaded into the freeze-dryer, and frozen at -30°C. Sublimation was then initiated after pulling a vacuum of 100 μbar and raising the shelves’ temperature to 10°C. After 3 hours, the process was interrupted, and the remaining ice was allowed to thaw.

Selected vials were weighed before loading the lyophilizer, and at the end of the drying step, vials were fully stoppered and weighed. The amount of water lost during sublimation was calculated and compared between equivalent positions in each freeze-dryer (Figures 5 & 6). A faster sublimation rate corresponds to a higher heat transfer. 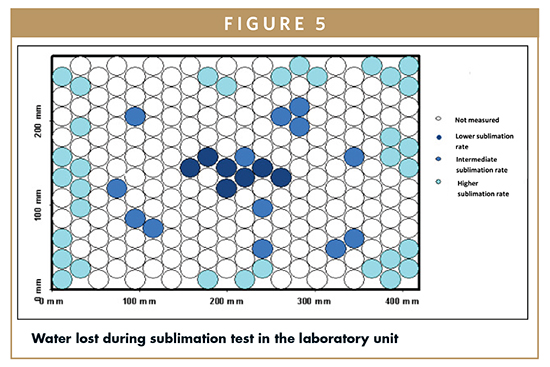 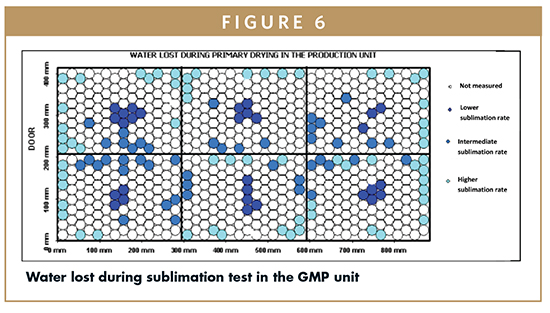 The weight loss due to frozen water obtained in the lab unit ranged between 87% and 105% of that in the production freeze-dryer, showing an acceptable comparability in terms of sublimation performance.

Downloaded digital data from lyophilization cycles performed in the pilot and GMP units were compared. Average deviation from temperature set point and average vacuum value were calculated for each step, along with minimum and maximum deviation from the temperature and vacuum set points.

Comparison of several critical quality attributes related to the lyophilization process for products manufactured at pilot scale and at-scale was also completed, including appearance of the lyophilized product and the reconstituted solution, pH, reconstitution time, residual moisture, content by HPLC, and related substances.

Analytical data were comparable at both pilot scale and GMP scale. The results for residual moisture indicated that the lyophilization process was uniform throughout the lyophilizer chamber at both scales. The moisture mapping line graph for the GMP unit is shown in Figure 7. 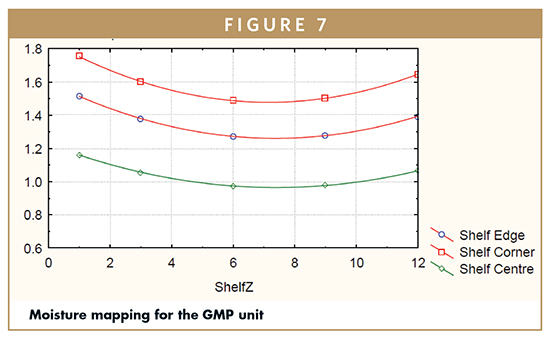 The results for the assay and related substances indicated that the lyophilization process was uniform throughout the lyophilizer chamber and had no adverse impact on the product at any freeze-dryer location at either scale. Lyophilized products appear to have similar reconstitution times and residual moisture contents.

These results established confidence that lyophilization in the LyoMax units in the GMP area of Patheon’s Ferentino site, yielded products that achieved predefined specifications and quality attributes, based on parameters tested in the PDS department’s pilot unit. The side-by-side comparison of digital data collected from lyophilization of lab batches and batches manufactured in the GMP area showed that the performance of the freeze-dryers are within an acceptable control range.

The variations around the target set point have a negligible impact on the products, and the experiments clearly demonstrated the scalability of the equipment. While the batch-to-batch consistency was high, as measured by a number of analytical properties, especially those sensitive to lyophilization, acceptable product characteristics were maintained during scale up from lab scale to production freeze-dryers.

From these results, it can be concluded that just as both laboratory and commercial scale equipment can be maintained at a comparable state of control, products can be reliably made using either scale of equipment – confirming the scalability of the processes. 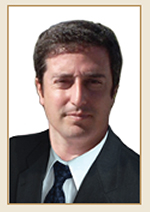 Enrico Corona serves as Director in PDS for formulation and process development at Patheon Italia – Ferentino site. He earned his Bachelor of Science in Medicinal Chemistry and his additional Bachelor of Science in Pharmacy from Rome University “La Sapienza”. Upon graduation in 1996, he joined the Pharmacy Research and Development Division of Intervet, where he was involved in the formulation of sterile liquid and semi-solid products. He joined Patheon in February 2003. While at Patheon, he has been active in the development of new liquid and lyo parenteral formulations for preclinical and clinical and for the marketplace. He conducts lyophilization cycle development and presides over scale-up to fill finish sterile suite. He can be reached at enrico.corona@patheon.com.