LOC-BASED DEVICES – Lab on Chip – How Far Are We Along the Road?

Lab on Chip (LOC)-based devices are an integration of multiple disciplines and the miniaturization of the major laboratory procedures. Recently, these devices are branching into additional aspects of healthcare, such as drug delivery, stem cell, environmental monitoring, and synthetic biology, owing to the high level of integration required to develop an LOC device.

LOC technology is continually being explored by multiple small-to-medium size companies, predominantly in North America, Europe, and Asia. The technology itself is established as evidenced by organizations having demonstrated working prototypes. Improvements in the manufacturing and microfluidics of the devices, as well as multiplexing complex laboratory processes are where the maximum R&D is taking place. Adoption levels of LOCs have been relatively low across its applications areas. Poor consistency and reproducibility of results using the LOC is hindering adoption. Leading players are trying to resolve this challenge. LOC is still in the early stages of adoption across most application areas. Amongst all application areas, Point-of-Care (POC) and clinical research have the highest adoption rates.

It is important to understand the intricacies involved that cause a potential delay to all the developments and efforts across different applications. Interoperability with existing laboratory equipment is a major stumbling block for microfluidics.

Existing laboratory equipment will operate at a much larger scale than the microfluidics instruments; comparing results from these two different platforms will prove a major challenge. Incorporating microfluidic devices into existing workflows is a major stumbling block to the adoption of microfluidics into regularized drug screening and discovery workflows. Considering drug screening and discovery is a decade-long process, it is likely to pose significant challenges on scientists to incorporate LOC devices into ongoing programs.

LOC companies in the diagnostic segment are expected to be hurt the most by this, due to the additional product development associated with regulatory requirements. A related question that remains unresolved is the management of genetic and other medical records. Highly dense biochips, whether microfluidics or microarrays, can produce huge volumes of data about a person very rapidly, not only about gene sequences but also networks and expression levels (which are seen as more important at present due to the low number of genes). The research segments, which rely increasingly on clinical data, for example, morbidity and SNPs, will also be affected. Content is increasingly important and is likely to be limited depending on how these matters play out. Genetic content of targeted analyses tools, such as various DNA and protein arrays, will undoubtedly be influenced by the intellectual property issues.

The microfluidics market’s main competitors are the automation and instrument manufacturers, more so than the companies in the microfluidics market. The reasoning is providers of conventional drug discovery and diagnostic technologies are infusing greater levels of automation and miniaturization into their products. Within the LOC industry itself, the participants have been cautious enough to steer clear of the applications developed by others in the industry. In addition to the automated instruments that vendors of conventional technologies currently offer, they are also proposing high-density microplates, namely 384 and 1536.

Figure1 shows the application of LOCs across different sectors through 2020. Let’s take a look at the present status of LOC application: 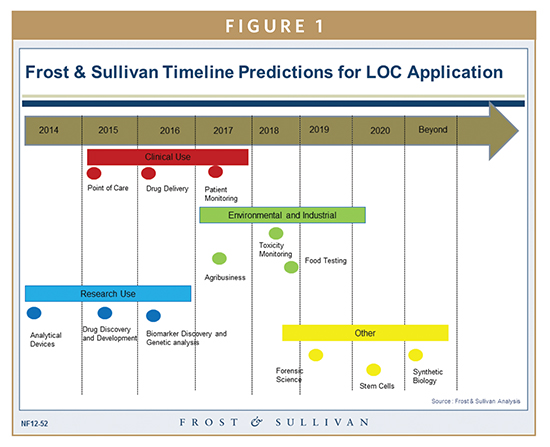 Point-of-Care Diagnostics – Progress is being made for hand-held portable and benchtop devices, disease detection for infectious diseases, and cardiovascular conditions. This is considered one of the highly competitive markets. Some of the companies to watch in this area include Ubiquitome, InSilixa, QuantuMDx, and Oxford Nanopore.

Drug Delivery – Progress is being made in miniaturizing drug delivery to improve patient adherence and reduce side effects. Slow and controlled drug delivery on a long-term basis is also an area being explored. Companies to watch in this area include Draper Laboratory and MicroChips.

Patient Monitoring – Monitoring chemotherapeutic substances in cancer patients, specifically targeting high-risk and extremely ill patients. Research is underway to enable monitoring of astronauts in space stations for indicators like oxygen and carbon dioxide levels, bone mass, rate of heart beat, and blood pressure. One of the key institutions to watch out for in this area is École Polytechnique Fédérale de Lausanne (EPFL).

Drug Discovery & Development – LOCs are widely used in development of new drugs and improvement of therapeutic effects of present drugs. Examples include the screening of drugs during the manufacturing process and understanding of clinical response of patients to drugs.

Analytical Devices – LOCs have been in this area for quite some time. Miniaturized lab processes, such as PCR, electrophoresis, HPLC, GC, and LC, have already been in the market for a while. A few companies include Perkin Elmer, Agilent Technologies, and Sphere Fluidic.

Biomarker Discovery & Genetic Analysis – LOCs aid in the discovery process of protein biomarkers and has implications in detection and monitoring of disease. Genetic analysis of proteins, enzymes, nucleic acids, and various other molecules can be conducted using LOC devices. They can boost research speed and aid in filling knowledge gaps in disease heterogeneity and molecular pathway analysis. Panasonic (in association with IMEC) and IARPA (Intelligence Advanced Research Projects Activity) are pursuing POC devices for detecting SNPs (Single Nucleotide Polymerisms) and other applications.

Toxic Monitoring – LOCs use in environmental monitoring comes from their capability to detect pollutants. Algae detection is an area in which LOCs have already been applied. The technology also aids in efforts to prevent contamination of water bodies, essentially protecting food source.

Agribusiness – Remote testing is an important need in the agricultural industry. LOCs have been a platform for the development of food and agricultural testing devices. LOCs also aid in the effort of testing for excessive pesticide usage in farms, improving quality control for wheat, rice, and other agricultural products. A company developing this technology is Acron Genomics.

Food Testing – Microfluidics chips are being developed in multiple companies to aid in discovering food contamination. Meat processing plants, food storage warehouses, and large grocery stores will benefit largely from the development of this testing equipment. Pathogenetix is a company that has already launched its equipment.

Biodefense – Threat of biological terrorism has created a need for rapid testing devices to aid law enforcement officers who may come in contact with deadly biological agents. LOC and microfluidic technology will have great potential to be part of the ever-growing and highly lucrative military industry. A few companies and research centers include Acron Genomics and Sandia National Laboratories.

Forensics – The potential to test DNA at a crime scene in under several hours can greatly aid the investigation time and cost. The concept of implementing LOCs is currently under research across multiple universities. There has been substantial progress taking place in developing microfluidic chips for forensic science.

Given the wide range of application areas, it is important to note that the current demand for LOCs is created by the drug discovery and development and basic research across academics. Clinical use is the second most dominate market segment, with diagnostics leading the demand creation in this space.

Development of these technologies requires funding support from venture capitals, government agencies (DARPA, NIH, US Army, NFSv and others), and private research funding organizations and charities. Reference Figure 2 for splits in funding patterns. 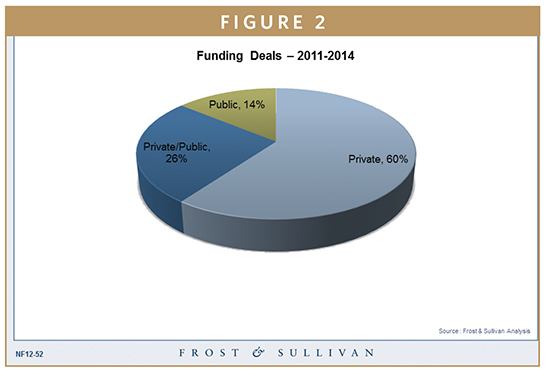 North America represents the largest number of technology developers across LOCs. European nations follow North America with the second highest number of companies working in the LOC space. Amongst the Asian countries, India, Japan, and China are leading in technology development, specifically LOC-based POC. There is also an increasing number of university spin-offs entering the LOC space in the US, India, Germany, and Japan. Environmental monitoring and toxicity testing applications using LOC-based devices is growing in European countries as well. Patent applications are also prominent in countries with high-technology innovation.

Among developing nations, some African countries have high adoption levels of LOC devices for diagnostics needs. Pharmaceutical and biotechnology adoption of LOC-based analytical devices is prominent in North America, Europe, and parts of Asia and Australia.

The investment ecosystem has significantly changed in recent years due to a rapidly growing interest in organizations toward miniaturizing and developing remote diagnostic capabilities. Speculating a high return, investment bodies are highly interested in LOC and microfluidic chip-based technology, as the constant push in the direction of personalized medicine and better healthcare facilities results in a vital need for cost-effective solutions. 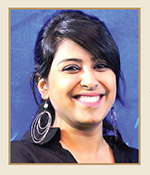 Divyaa Ravishankar is a Senior Industry Analyst for Frost & Sullivan’s Life Sciences practice. She has diverse expertise within healthcare IT and life sciences with a focus on in vitro diagnostics. Her expertise constitutes of laboratory research, management consulting, and competitive intelligence. To supplement her expertise, she also has broad-ranging industry experience in varying sectors, where she has established long-standing working relationships with leading industry participants in areas like clinical diagnostics, pharmaceuticals, and biotechnology. Ms. Ravishankar, earned her MS (Hons.) in Biological Sciences from Birla Institute of Technology and Science, Pilani, India. For more information on Frost & Sullivan’s global Life Sciences practice and offerings, please email kayla.belcher@frost.com or visit www.frost.com.