Transdermal delivery of therapeutic agents provides several advantages, including avoidance of first-pass metabolism, easy termination of dose by removal of patch, easy application for extended period of time by controlling the drug release, and many more. The skin is poorly permeable to drugs that are hydrophilic (log P<1). Thus, to enhance the delivery of hydrophilic drugs, chemical permeation enhancers (CPEs) are being utilized in dermal/transdermal products. CPEs are chemical substances that facilitate transport of co-administered substances across the skin, mainly by disrupting the highly ordered structure of stratum corneum lipids.1

Iontophoresis is one of the widely investigated active techniques that involve passing electrical current across skin in the presence of conductive vehicle. As a result, ions migrate through the skin toward the electrode of opposite charge. The amount of drug delivered is directly proportional to amount of current applied, duration of current application, and area of skin surface that is in contact with the active electrode.3 However, iontophoresis is not suitable for non-polar drugs as they lack any charge and possess poor water solubility. The second objective of this study was to investigate the feasibility of delivery of lipophilic drugs by iontophoresis after complexing them with a polyanionic modified cyclodextrin, Captisol (CAP). As reported earlier, CAP enhanced the transdermal delivery of a lipophilic drug propofol by ~four-fold when delivered using the Captisol complex across the porcine epidermis compared to control (drug solution in the neat form). Iontophoresis of the complex resulted in ~four-fold more transdermal transport flux over the passive flux of complex.4 Further, to provide more validity to the concept and to investigate the potential of CAP as a transdermal transport enhancer for lipophilic drugs, ibuprofen (log P 3.5) and testosterone (log P 2.99) were chosen as test molecules.

Phase solubility studies were performed according to the standard protocol.5 Solubility measurements were carried out at constant temperature (25°C) using different concentrations of aqueous solution of CAP. A large excess of testosterone or ibuprofen (200 mg) was added to 3 ml of water with accurately weighed amount of CAP and diluted to concentrations from 0.002 to 0.02 M in screw capped scintillation vials. The resulted solution was vortexed for 5 mins and was shaken for 5 days using a rotary LabquakeTM tube shaker (Labindustries, Inc. Berkeley, CA). Then, an aliquot of aqueous phase from each mixture was withdrawn, centrifuged for 15 mins at 13,000 RPM, and the supernatant was collected and filtered through a 0.45-micrometer cellulose acetate membrane filter. A portion of clear filtrate was diluted appropriately and analyzed using high-performance liquid chromatography (HPLC).

Preparation of Solid Complex Mixture
Captisol-enabled testosterone (CE-T) and Captisol-enabled ibuprofen (CE-I) inclusion complex was prepared by freeze-drying method. The aqueous solutions of complex were prepared by dissolving 100 mg of drug in 10 ml of 10% and 12% CAP in distilled water for ibuprofen and testosterone, respectively. The resulting mixture was vortexed for 15 mins and sonicated for 20 mins followed by setting aside at 25°C for 48 hrs to attain equilibrium solubility. The clear solution (10 mL) was then subjected to freeze drying for 24 hrs to obtain white powder.

Transport Studies Across Porcine Epidermis From Aqueous & Hydro-Alcoholic Solution
The vertical Franz diffusion apparatus (Logan Instruments, Somerset, NJ) was used for all transport studies. The receiver compartment was filled with 5 mL of freshly prepared phosphate buffered saline (PBS) (pH 7.4) with 30% alcohol and donor compartment with 0.5 mL of permeant solution. In vitro passive permeation studies were carried out using aqueous solution containing the drug-Captisol complex (dissolved in water) equivalent to 10 mg/mL of drug in the donor compartment. As the pure drug is not soluble in water, a solution of pure drug dissolved in 50% alcohol was used as control at same concentration.

For in vitro iontophoretic permeation of complex, constant current cathodal iontophoresis was applied using Phoresor® iontophoresis unit (Iomed, Salt Lake City, UT) at a current density of 0.5 mA/cm2. Permeation studies were carried out from solution formulation after dissolving the complex in water at the same concentration as passive delivery (10 mg/mL) for a period of 24 hrs, and samples were analyzed using HPLC technique.6

Transport Studies Across Porcine Epidermis From Gel Formulation
Transport of testosterone from the HPMC gel formulation prepared by Hot/Cold technique at 3.5% w/v concentration across porcine epidermis was studied by both passive- and iontophoretic-mediated delivery for a period of 24 hrs and sample from the receiver compartment was withdrawn at predetermined time points and estimated for testosterone using HPLC.

MTT Assay
Cell viability of dermal fibroblast derived from humans (CCD-1093Sk) was studied using the CAP solutions. Fibroblast cultures were stored and handled according to the standard protocol from ATCC. To study the effect of the CAP formulation on cell viability, cell cultures were exposed to different concentrations ranging from 0.5% to 2% w/v for a period of 24 hrs. Each test formulation was studied in eight trials. MTT (3-(4,5-dimethylthiazol-2-yl)-5-(3-carboxymethoxyphenyl)-2-(4-sulfophenyl)-2Htetrazolium) cell proliferation assay was performed according to the protocol supplied by Promega.7 The optical absorbance data from the samples were then used to calculate the percentage cell viability.

Phase Solubility Studies
The phase solubility studies revealed a proportionate increase in the water solubility of drug with increase in the concentration of CAP. The linear correlation between different concentration of solutions of CAP and drug in solution suggests an AL type relationship and stoichiometry of 1:1 between the substrate and complexing agent.8 Because the slope of this plot is less than 1, the apparent stability constant was calculated using the equation Kc = Slope/S0 (1-Slope), where S0 is the solubility value of drug in water and was found to be 10,569 and 12,369 M-1 for testosterone and ibuprofen, respectively (Figure 1). 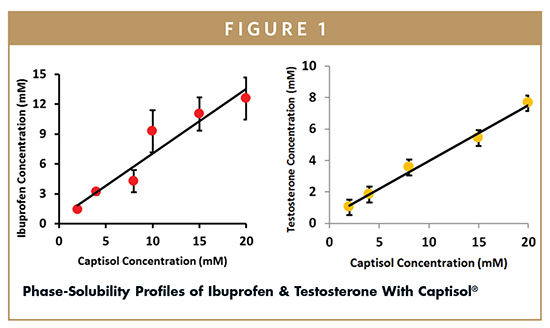 Transport Studies Across Porcine Epidermis From Aqueous & Hydroalcoholic Solution
Passive delivery of ibuprofen from aqueous solution of CE-I complex resulted in a flux of 1.98 ± 0.71 micrograms/cm2/h, which is comparable with the flux achieved in case of hydroalcoholic solution of neat ibuprofen used as control (1.93 ± 0.24 micrograms/cm2/h) (Figure 2). The ability of alcohol to enhance the permeation of drugs is well documented.9 In case of hydroalcoholic solution of pure API, the alcohol could be potentially acting as a permeation enhancer as well in addition to serving as a co-solvent. It is intriguing that the permeation from the CAP complexed drug solution prepared in an alcohol-free aqueous vehicle was found to be comparable with the alcoholic solution of API. It is evident that the passive delivery of ibuprofen would be possible either when a suitable co-solvent system is used as a vehicle or when the drug is rendered soluble in water with the use of solubility enhancers, such as CAP. 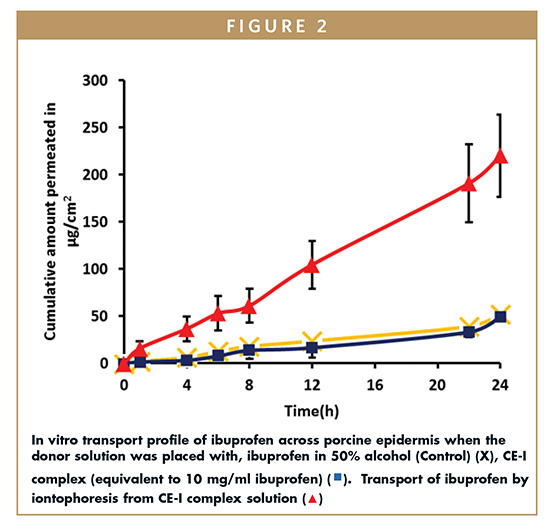 In agreement with an earlier observation with a lipophilic drug propofol, it was found that complexation with CAP facilitated the transdermal transport of the drug by iontophoresis.4 Further, iontophoresis of CE-I complex resulted in a drug flux of 9.29 ± 1.19 micrograms/cm2 h, which is ~five-fold more compared to the passive permeation flux of ibuprofen from CE-I complex and control.

There was a significant change in the pH of the donor solution during iontophoresis observed as the complex dissolved in water was used for iontophoretic permeation studies instead of buffers to keep the solution devoid of any competing ions. Considering the low pKa value of sulfonic acid groups on the CAP10, an increase in the pH in the donor compartment due to hydrolysis of water during iontophoresis is not likely to affect the iontophoretic transport significantly. To minimize the effect of pH changes on the permeation of drug across the skin, the drug solution in the donor was replaced intermittently with freshly prepared drug-CAP complex solution.

Release & Permeation Studies of Testosterone From HPMC Gels
These studies were performed to investigate the fact whether CAP would even work in the HPMC gel formulations as a drug transport enhancer. Release of testosterone from HPMC gel formulations with CE-T complexes was studied using 1000 Da molecular weight cut-off membrane. The amount of drug released was ~48% at the end of 24 hrs with CE-T complex. The molecular weight of CAP and the CE-T complex (2.4 kDa) is much higher than the MWCO of membrane (1 kDa), suggesting that the amount of drug in the receiver compartment was predominantly due to the ability of CAP to enhance the thermodynamic activity of drug in the donor compartment.

The amount of testosterone permeated from the gel formulations across the porcine epidermis in 24 hrs was found to be 2.45 ± 0.92 micrograms/cm2. The decrease in the cumulative amount permeated across the porcine epidermis compared to solution could be attributed to relatively higher viscosity of gels. Further, iontophoresis using the hydrogel containing CE-T resulted in permeation of 48.12 ± 6.12 micrograms/cm2 (Table 1).

MTT Assay
The MTT assay is a tool to assess the safety of Captisol for dermal use. The previous studies have shown that CAP appears to penetrate the skin in significant amounts.4 Thus, cell viability studies on fibroblast (derived from humans) were performed at different concentrations of CAP solutions. The cell viability of non-treated cells was considered as 100%. More than 80% of cells were viable at 1.5% w/v concentration of CAP (Figure 3), with further increase in concentration to 2% w/v the percent cell viability decreased to 76%, which is likely due to increased osmotic pressure in the medium (2% Captisol in culture media raises the osmolality such that hypertonic). 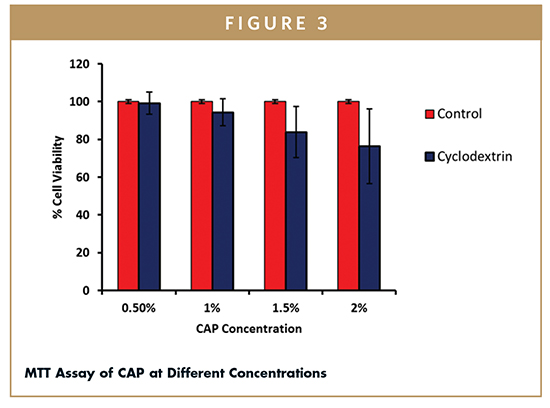 The results from the in vitro permeation studies indicate that the passive permeation of lipophilic drugs could be facilitated by complexing with CAP. Moreover, complexing the lipophilic drugs with a charged cyclodextrin such as CAP demonstrated the feasibility of iontophoresis of lipophilic drugs. Results obtained from the in vitro studies clearly demonstrated the transport enhancement ability of CAP in solution as well as in gel formulations. The CAP is found to be safe for dermal use and could be employed as a solubility and transdermal drug transport enhancer.

Dr. Abhishek Juluri is a graduate student at The University of Mississippi School of Pharmacy. For the past 4 years, he has been working on novel techniques for delivering drugs across skin. He has published six articles and co-authored a book chapter.

Fahimeh Ghasemi earned her MS in Electrical Engineering from Sharif University, Tehran, Iran, in 2010, where she is currently a PhD student in Biomedical Engineering (Bioelectric) at Isfahan University of Medical Science with a research focus on drug design. Her current main research is in Statistical Modeling and Machin Learning. She has background in Biomedical Image and Signal Processing.

Dr. S. Narasimha Murthy is an Associate Professor of Pharmaceutics and Drug Delivery at the University of Mississippi School of Pharmacy. He has been working extensively in the area of dermal/transdermal delivery of drugs. Dr. Murthy has published over 80 peer-reviewed research papers and edited two books on topical delivery of drugs. He is the founder of Institute for Drug Delivery and Biomedical Research (www.IDBREsearch.org) in Bangalore, India.