Due to the lipid material’s unique properties and excellent biocompatibility, LNPs are suitable for use in nanomedicines, vaccines, nutrition supplements, and diagnosis by different routes of administration, such as oral, topical, pulmonary, and parenteral injection. Figure 1 shows a general guide and practice in the selection of lipid nanoparticles for different types of therapeutic moiety by Ascendia Pharma. 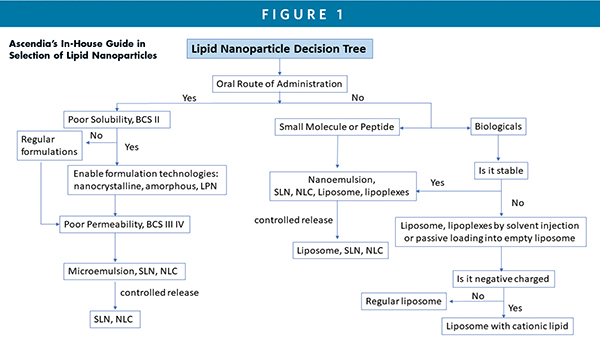 Microemulsions and nano-emulsions are a form of liquid-form lipid nanoparticles that are mainly composed of lipids in liquid forms, which typically are composed of a lipid carrier, co-solvent, surfactants, and co-surfactant. Depending on the surfactant level, it can be classified as a (1) microemulsion (thermodynamic stable lipid concentrate with high level of surfactant); or (2) nano-emulsion, which is a pre-formed nano-system as a result of high-energy inputs and is kinetically stable in the aqueous phase.

For oral route of administration, lipid nanoparticles can be frequently presented as a lipid concentrate (microemulsion); upon oral administration, the lipid concentrate will be diluted by GI fluid and spontaneously form lipid nanoparticles. Due to lipophilicity of the lipidic material, oral lipid nanoparticles have traditionally been used to enhance solubility and bioavailability of small molecule compounds and peptides that have solubility and cell permeability issues (namely BCS II and IV compounds). Lipid nanoparticle-based drug delivery systems enhance the oral bioavailability of drugs via three main mechanisms: (1) increasing dissolution and solubility by pre-dissolving drugs in lipid carriers; (2) increasing drug permeability in the GI tract by inhibition of P-gp and other efflux transporters; and (3) bypassing the first-pass metabolism of the drug through the lymphatic absorption processes. In addition, lipid-based drug delivery systems have the potential to decrease the food-effect and to increase reproducibility of the pharmacokinetic profile of those orally administered drugs by reducing erratic absorption.

Lipid concentrate for oral formulations can be processed simply by mixing, dissolving, and filling into bottles or liquid-filled capsules. Hard gelatin/HPMC capsules, which offer flexibility for use from the eary to commercial stages of development and different options for trade dress, are frequently chosen for lipid-based oral formulations.

Nano-emulsions
Nano-emulsions, which are composed of nano-sized droplets dispersed in a continuous phase, can be classified into either oil-in-water (O/W) or water-in-oil (W/O). Oil-in-water emulsions have gained significant application in the drug delivery of lipophilic drugs or nutritional supplements by parenteral, oral, and topical routes of administration, whereas W/O emulsions have increased their application for delivery of hydrophilic small molecules and biologicals.

As a result of small droplet size as low as <50 nm, the large surface area, and a reduction in surface tension, nano-sized emulsions can provide unique solutions for overcoming drug solubility, permeability, and stability problems. Compared to microemulsions, nano-emulsions contain much less of the surfactants, and as such, are meta-stable and more susceptible to Ostwald ripening. In addition, nano-emulsions require greater kinetic formation energy, and are usually prepared using high-pressure homogenization, microfluidics, or ultrasonic generators. However, a well-formulated nano-emulsion will maintain its physical-chemical stability through its shelf-life of at least 2 to 5 years. Because of the undesirable side-effects caused by many solvents and surfactants (in fact, the FDA places daily intake limits on such ingredients), microemulsions are disadvantageous compared to nano-emulsions for human use via the parenteral route. In addition, nano-emulsions possess benefits in reduction of injection pain and thrombophlebitis, enabling of targeted drug delivery, and reduction of drug toxicity.

A few lipid-based nano-emulsion pharmaceutical products have been marketed in the past years, such as Intralipid Infusion as a parenteral supplement formulated as 10%-30% Soybean Oil, 1.2% Egg Yolk Phospholipids, 1.7% Glycerin, and Water for Injection; and Propofol Emulsion Injection formulated in a lipid emulsion containing 10% soybean oil, 2.25% glycerol, and 1.2% egg lecithin. Nano-emulsions have also been proven safe for use as a vaccine adjuvant, eg, Humenza®, an Influenza H1N1 vaccine from Sanofi Pasteur, which is composed of an O/W type emulsion AF03; and the MF59 adjuvanted subunit influenza vaccine (Fluad), which was approved for those aged 65 years and older. MF59 is Novartis’ proprietary O/W emulsion consisting of 4.3% (vol/vol) squalene, 0.5% Tween 80, and 0.5% Span 85, in citrate buffer (10 mM). MF59 was prepared via homogenization, sterilized by a 0.22-mm pore size filter.

Solid lipid nanoparticles (SLNs) were developed as an alternative system to the existing emulsions dosage forms in which the liquid lipid (ie, oil) was replaced by a solid lipid. SLNs not only offer the benefits of emulsion in excellent biocompatibility, high bioavailability, nano-sized and large surface area, but could also maintain high drug loading and sustained delivery of drug from its matrix.

Structure lipid nanoparticles (NLCs) were introduced by adding a small quantity of liquid lipid to the solid lipid for the purpose to overcome the potential issues with SLNs in potential reduction in drug loading due to drug expulsion by crystallization or transformation of the solid lipid over the storage period. NLCs could increase drug loading by combining solid lipids with small amounts of liquid lipids or by the formation of an amorphous type NLC by introduction of special lipids, such as hydroxyl stearate and isopropyl myristate to the solid lipid.

Like traditional emulsion formulation, SLNs/NLCs are made up of solid lipid and/or liquid lipid, emulsifier, and water. The lipids used may be triglycerides, partial glycerides, fatty acids, cholesterol, and waxes.

Discovered in the 1960s, liposomes consist of one or several lipid bilayers, ranging in size from 20 nm and ~1000 nm; the unique structure of which enables loading of both hydrophilic drugs into its aqueous interior and hydrophobic drugs in its lipid bilayer. Liposomes can also be classified into two categories: multilamellar vesicles (MLVs) vs unilamellar vesicles. Unilamellar vesicles can further be divided into large unilamellar vesicles (LUVs) and small unilamellar vesicles (SUVs). The surface charges of LNPs can be positive or negative, mainly determined by the lipid head groups. Absolute zeta potentials of over 30 mV should be a good indicator of stable LPN. Lipoplexes are electrostatic complexes formed by mixing preformed cationic lipid liposomes with an anionic therapeutic moiety (such as siRNA) an aqueous environment.

Unilamellar liposomes can alter their PK and biodistribution profile of therapeutic entities and thus enhance therapeutic efficacy and reduce toxicity of drugs. Successful liposomal products in the market include: 1) Doxil® for treatment of ovarian cancer, Depocyt®, Amphotec®, DaunoXome®, MyocetV, etc for small molecule delivery; 2) Epaxal® (HAV adsorbed to the surface of special liposomes, virosomes) and Inflexal® for vaccines; 3) Onpattro® for siRNA, Comirnaty® (Pfizer COVID-19 Vaccine), and Moderna COVID-19 vaccine for mRNA. Multivesicular liposomal products include Depocyt®, DepoDurT™ and Exparel® by DepoFoamT™ technology. The multivesicular liposomes in the 3- to 30-mm size range can release drug over an extended of time ranging from 1 to 30 days.

Liposomes for small molecule delivery are most commonly made up from phospholipids, such as phosphatidylcholines (PC), phosphatidylethanolamines (PE), phosphatidylserines (PS), phosphatidylglycerols (PG), and helper lipids, such as cholesterol and PEG-Lipid. For example, bupivacaine liposome injectable suspension (Brand Name: Exparel) contains bupivacaine at a nominal concentration of 13.3 mg/mL. Inactive ingredients and their nominal concentrations are: cholesterol, 4.7 mg/mL; 1, 2-dipalmitoyl-sn-glycero-3 phospho-rac-(1-glycerol) (DPPG), 0.9 mg/mL; tricaprylin, 2.0 mg/mL; and 1, 2-dierucoylphosphatidylcholine (DEPC), 8.2 mg/mL. The pH of Exparel is in the range of 5.8 to 7.4. In liposomal formulation design, attention should be given to the phase transition temperature of liposomes in relation to liposome formation and stability. During manufacturing, above the temperature, phospholipids exist in liquid crystalline phase that helps hydrophobic tails of phospholipids oriented to form closely continuous bilayer membrane, whereas below the temperature, phospholipids exist in a gel state and are not able to form liposomes. In addition, the effect of formulation on liposome stability, storage temperature, and drug release is also related to the phase transition temperature; drug release from the liposome is accelerated at a temperature above the phase transition temperature.

Typically, RNA liposomes consist of cationic lipids and DSPC as the main ingredients together with the helper lipids, such as cholesterol and PEG-lipid. Helper lipids help stabilize the physical stability, enhance circulation time in blood, and improve RNA delivery by promoting destabilization of the lipid bilayer. In some cases, Lipoplexes that formed by mixing preformed cationic lipid liposomes with anionic siRNA in an aqueous environment can be used. For RNA liposomal delivery, due to negative charge of RNA, cationic lipids or ionizable cationic lipids become the critical ingredients to improve RNA encapsulation efficiency. Furthermore, cationic lipid can reduce RNA degradation in neutral body fluid because of complexation between RNA and cationic lipids and to promote endosomal escape inside the cell. Ionizable cationic lipids are a newer class of lipids that is characterized by their ability to change their charge as a function of pH. At a low pH, they are protonated and carry a positive charge; at neutral pH, they are neutral without charge. The positive charge at a low pH help encapsule RNA with good efficiency, whereas the neutral charge of the LPN in the physiology pH help reduce the exposure of RNA to the body fluid that minimize RNA degradation. When LPN is at the target cell, the low pH environment helps enhance LPN cellular uptake due to interaction of cationic lipid with negative change cell membrane that breaks down the bio-layer membrane and helps RNA in endosomal escape and release into the target cell organ.

Liposome Preparation Methods
There are several ways to make liposomes. The most popular methods are film hydration and the solvent injection method. The film hydration method involves drying down lipids from organic solvent, rehydrating the lipids in aqueous media, formation of liposome by a process, loading the liposomes by active or passive method (may not necessary if drug is co-processed with lipid), purification of liposomes by ultrafiltration method, sterile filtration, lyophilization if necessary, and fill and finish into a vial. The solvent injection method begins the process by initially mixing the lipid ethanol solution with an aqueous solution at a certain ratio/speed and then following steps afterward similar to the film hydration method.

LPNs are a very versatile formulation technology that can be applied to drug delivery of a variety of small/large molecules, peptides, and biologicals. Due to lipid’s unique properties and excellent biocompatibility, LNPs are suitable for use in pharmaceuticals, nanomedicines, vaccines, nutritional supplements, and diagnosis by different routes of administration, such as oral, topical, pulmonary, and parenteral injection.