Soft gelatin capsules (softgels) continue to be the oral solid dosage form preferred by consumers.1 Understandably, as they are easy to swallow and digest, effectively mask unpleasant tastes and smells, and have a pleasing appearance. Softgels also offer formulation and marketing benefits. They can accommodate a wide variety of compounds filled as liquids, solids, semi-solids, suspensions, or emulsions. They can also address a broad range of formulation challenges, such as improving the absorption and bioavailability of poorly water-soluble APIs. Softgels are particularly well suited for formulating low melting point APIs, which require additional processes for tablet forms. They also allow low- and ultra-low-dose precision for highly potent compounds. To extend product lifecycle with added patent protection, softgels can be developed in various dosage forms, such as chewables, controlled release, and softgels from non-animal materials.

Developing drug delivery systems with a targeted drug-release profile can be challenging, especially with dosages that require timed release, high dose, limited volume, and abuse deterrence simultaneously. Wisely choosing and efficiently modulating a release system for the aforementioned purpose is a head-scratching task that requires deep understanding of formulation science and softgel expertise. Formulation scientists must know the most efficient and effective ways to develop the softgel fill medicine and capsule shell to ensure quality and mitigate risk, saving formulation time and costs. Following Quality by Design (QbD) is the most appropriate approach for every aspect of pharmaceutical development.

This paper reviews the fundamentals and technologies for formulating sustained-release softgel capsules, presents a study by Banner Life Sciences to develop an extended-release matrix of softgel capsule fill that has the aforementioned characteristics for highly soluble drugs, and demonstrates the general approach of applying QbD methodology to extended-release softgel product development.

For many medical conditions, such as metabolic disorder, allergy, cancer, autoimmune, and neurodegenerative diseases, it is desirable for the drug to reach its targeted site of action at a therapeutically effective level and for the drug concentration to remain at that level over a sufficient period of time.2 These requirements can be met by applying controlled-release technologies to the oral solid dosage form through matrix swelling, erosion, or degradation, or through diffusion via membrane, or through osmotic pressure.

With controlled-release technologies, the drug release is based on the mechanism of drug dissolution and diffusion away from compressed matrices of bounded particles, such as thin-layer coated, granulated, microencapsulated, and active-loaded complexes, or from a sealed reservoir in semipermeable membranes. The balance between the binding forces of the active in the excipient matrix and the tendency for disintegration or dissolution of both the matrix and the drug molecules dictates the drug-release profile.

For developing extended-release softgel products for water-soluble drugs (especially Biopharmaceutical Classification System 1), increasing the binding force to retain the active in its matrix and to avoid initial burst is imperative. On the other hand, for poorly water-soluble drugs, enhancing drug dissolution, keeping the drug in a highly dispersed state, and avoiding “crash” at the release site is the primary approach.

A variety of controlled-release technologies are applied to or are being developed for softgels. Time-delayed release was achieved on the shell in the forms of an enteric coating on the shell or an integrated enteric shell (EnteriCare®). An alternative form is the EnteriCare softlet, where a tablet is enrobed in an integrated enteric coating. For other modified-release profiles, such as extended release, control mechanisms are built mainly in the fill matrix.

Options for fill matrix configurations include, but are not limited to, matrices of either lipophilic or hydrophilic excipients with APIs simply solubilized or dispersed into them; matrices that are capable of responding to external signals to release drug; suspensions of naked or coated API microcrystals, granules, microspheres, freeze-dried powders, or multi-particulates; and dual-controlled-release matrix systems that combine a matrix or multiple matrices with particulates (VersatrolTM).

Building control mechanisms in both shell and fill of a softgel elevates the configurations to another level. As an example, a system combining time-delayed release and an environmentally responsive matrix is being developed for colon-targeting drug delivery. Multi-phase release profiles could be accomplished in the form of a Gelpot, where a tablet (single or multiple), capsule (single or multiple), or both are encapsulated in a larger softgel, or in the form of Combule (multiple chambers like a peanut shape). In these ways, medicines that are not compatible with one another could be combined in one softgel dosage form as well.

From the dosage requirement perspective, characteristics of extended-release, high dose, limited volume, and abuse deterrence are often required collectively in the release systems for many highly soluble APIs (BCS 1 and 3), such as caffeine, diphenhydramine, metformine, and opioids. Drug-release technology platforms independent  to drug molecules or acidity of the release site should be considered so that any given API can be loaded into the platform to achieve the desired release profile. Systematic investigation, including assessments of matrix configurations, functionalities of excipients, compositions of the matrix, and the process, is necessary to achieve such versatile softgel technology platforms.

Banner Life Sciences conducted an initial study to develop an extended-release softgel for highly soluble drug molecules with abuse deterrence. The purpose was to determine the best carrier with optimal compositions and process parameters in the most efficient way while mitigating risk.

Banner formulation scientists adopted a QbD approach, a systematic approach to pharmaceutical development that begins with predefined objectives and emphasizes product and process understanding and process control based on sound science and quality risk management.3 Assessing risk prior to manufacturing and taking steps to manage risks and maintain quality throughout all processes can significantly improve quality and efficiency and provide a better understanding of the development process, saving time and costs. The US FDA encourages drug developers and manufacturers to follow the QbD approach, which replaces the industry’s traditional approach of quality by test results.

After assessing numerous options for extended release, formulators chose a lipophilic matrix with dispersed API and functional excipients responding to the external conditions as the most promising carrier system to meet the specified requirements. This study demonstrated how the formulators followed the QbD principles in developing the defined extended-release matrix system.

Banner formulators adopted the FDA guidance for the development of an extended-release matrix system. First, they defined the quality target product profile (QTPP) of the matrix (Table 1). In the initial risk assessment, they identified and justified the critical quality attributes (CQAs) and assessed the risks of this matrix system, each component, and each process step in softgel manufacturing (Tables 2 & 3). 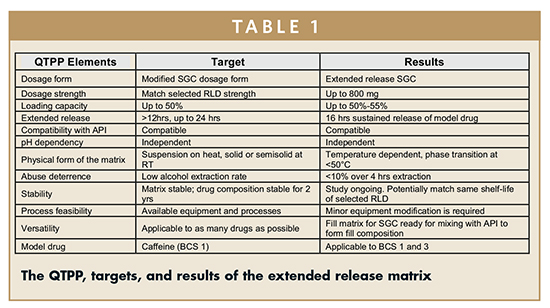 Focusing on a few key CQAs, the extended-release profile and the abuse deterrence, formulators conducted a small-scale development program, including multiple Designs of Experiments (DOEs) at bench-top and demonstration scales. The purpose was to modulate the release profile and achieve resistance to alcoholic extraction by selecting excipient candidates, exploring the range of the critical components and determining drug loading rate, while keeping process risks as low as possible.

Banner formulators achieved a fill matrix that could load up to 50% of the drug, provide sustained release of a highly soluble model drug for longer than 16 hours, was compatible with the API and independent to the acidity, and resistant to alcoholic extraction (Table 1). Examples of in vitro dissolution of the model molecule, caffeine (BCS Class 1), at controllable-release rates and very low alcoholic extraction rates are shown in Figures 1 & 2, respectively. 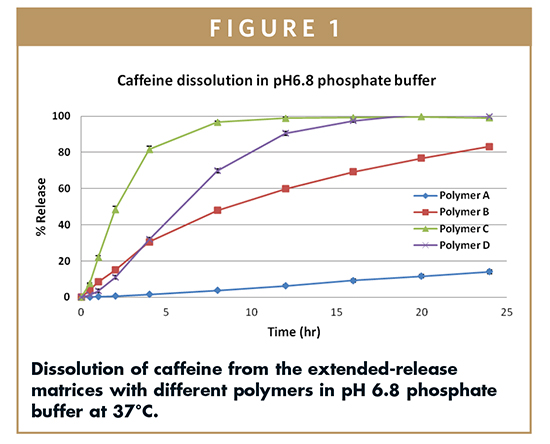 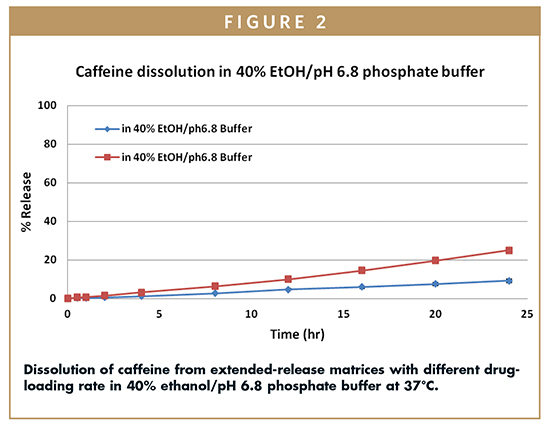 Based on the results, the formulators optimized the parameters. Table 4 shows the updated CQAs and risk assessments of the attributes from the matrix and fill components. Table 5 shows the updates to the risk assessments of the process steps. Many risks initially assessed as high were reduced to a medium level. After gaining knowledge of the extended-release matrix system, the formulators are now shifting their efforts to ongoing optimizations and continuous improvements.

Softgels are a flexible, appealing dosage form to consumers, drug developers, and marketers of pharmaceutical products and supplements. They can be developed in a wide variety of forms, sizes, shapes, and colors and encapsulate a broad range of fills, including liquids and high potent substances.

The goal of formulating softgels is to produce safe, consistent, high-quality dosage forms that deliver the drug or supplement as specified and meet quality and regulatory standards. When conducting softgel development studies, formulation scientists should follow the QbD principles to determine the best approach for formulation and processing in addition to applying fundamental knowledge in pharmaceutical sciences and technologies. Our experience demonstrates that following a QbD approach can save developing time and cost and mitigate the risks. 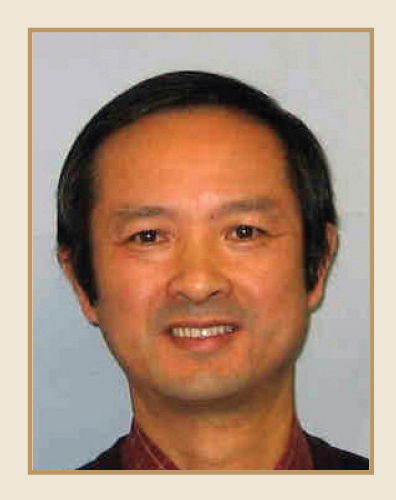 Dr. Yunhua Hu is a Senior Scientist at Banner Life Sciences, a specialty pharmaceutical company. He has diverse expertise in polymeric material sciences, controlled drug delivery, pharmaceutical formulation and process, and softgel technology development. Dr. Hu earned his PhD in Polymer Sciences from Wuhan University in China. He can be reached at yunhua.hu@bannerls.com. 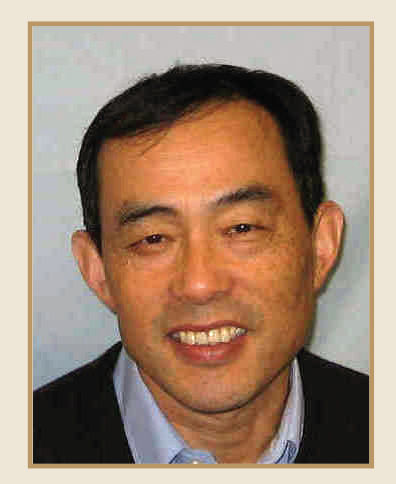 Dr. Qi Fang is Manager, R&D Material Sciences and Technology at Banner Life Sciences. His expertise is in material characterization, pharmaceutical product formulation, drug delivery system development, QbD, and formulation and process optimization. He earned his MS from Kansas State University and his PhD from the University of Nebraska.