Silicone elastomers are extensively used in medical implants and drug delivery systems because of their physiological inertness and high permeability.1 Silicone materials are hydrophobic in nature, making them particularly suitable for the delivery of lipophilic drugs, such as steroids. In this study, DMA was cured into a silicone matrix at 5%, 10%, and 15% concentrations (m/m) along with varying concentrations of Excipient A (0-20%) or Excipient B (0-12%). The silicone sample was placed in a simulated physiological environment, and HPLC analysis was conducted daily on the eluent, allowing quantification of drug release into the physiological solution on a daily basis over 14 days.

NuSil Technology’s MED-4840, a liquid silicone elastomer with a durometer of 40 A, was chosen as the silicone substrate. The silicone was blended with various concentrations of DMA, Excipient A, and Excipient B (Table 1, percentages are in m/m). 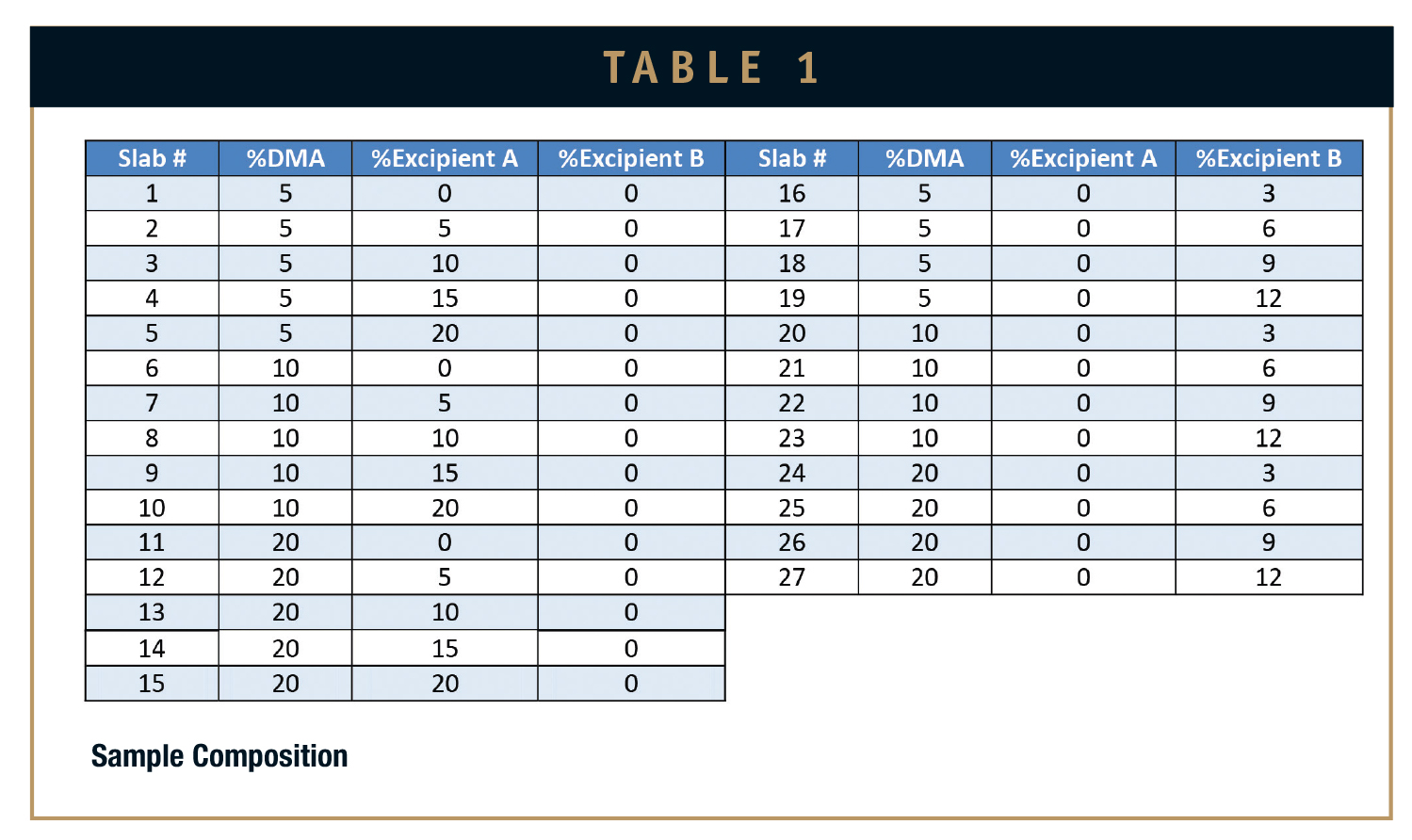 The samples were then cured into 0.075-inch slabs per NuSil Technology’s design specifications for MED-4840. Upon completion of curing, three disks were cut out of each slab for a DMA assay. An assay was performed by carrying out an aggressive extraction on a sample disk and analyzing the extract for DMA via HPLC analysis. The purpose of the assay was to verify that the calculated amount of DMA loaded into a sample correlated to the actual amount of DMA in a sample. An Additional three disks were cut out of each sample slab for elution testing over 14 days.

1. HPLC grade tetrahydrofuran (THF) was chosen as the extraction solution.

3. 20 mL of the extraction solution were transferred to each extraction vessel containing a disk.

4. Extraction vessels were placed into a temperature-controlled oscillating water bath at 37°C and 120 oscillations per minute for 1±0.1 hours.

6. An additional 20 mL of extraction solution were added to each extraction vessel for a final rinse, and the extracts were combined.

7. Extracts were analyzed via HPLC.

8. The disks were allowed to dry at ambient conditions for a minimum of 24 hours. Each disk was weighed and the mass was recorded as M2 to the nearest 0.0001 grams.

9. Results were averaged across the three samples.

2. A sodium phosphate saline buffer solution at 6.0 pH was chosen as the eluent.

3. 40 mL of the eluent were transferred to a suitable vessel containing a sample disk.

4. The vessels were placed into a temperature-controlled oscillating water bath at 37°C and 120 oscillations per minute for 24±2 hours.

5. The vessels were removed, and the liquid from each vessel was decanted into an appropriate container labeled with sample ID, day number, and replicate number.

6. The aforementioned steps were repeated daily for 14 consecutive days.

7. Each sample was submitted for HPLC assay of DMA.

8. Results were averaged across the three samples.

1. HPLC analysis was carried out under the following parameters (Table 2).

-Each standard was analyzed via HPLC, and the method was calibrated using those standards as the calibration levels. The calibration curve was linear with a R2 value of 1.00000.

-A Calibration verification was performed, and it was verified that the standard response result was accurate to ± 5%. 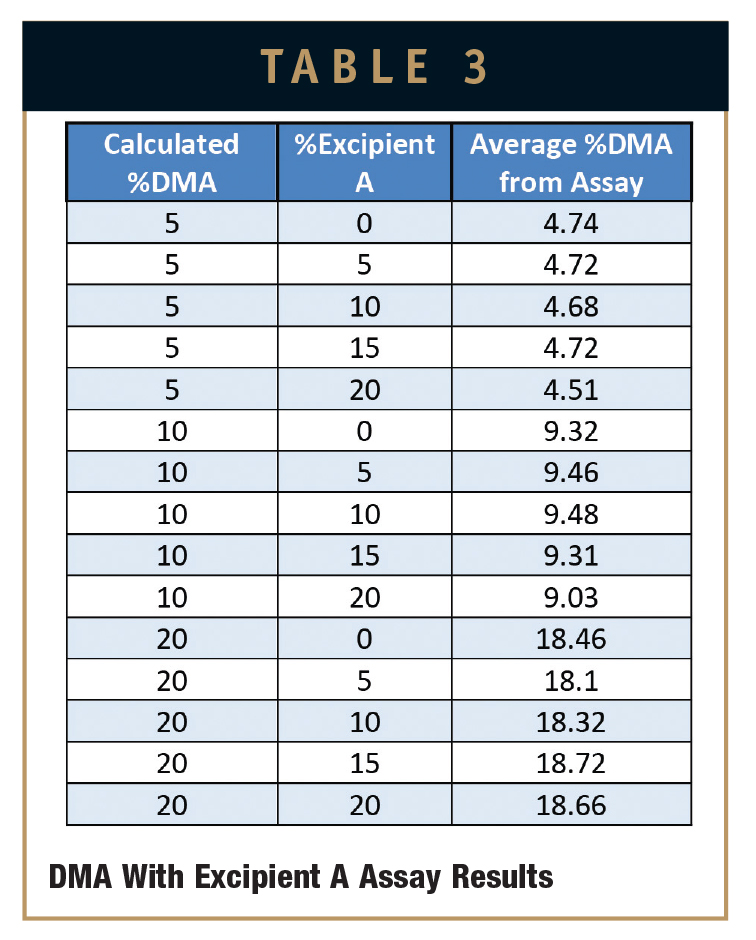 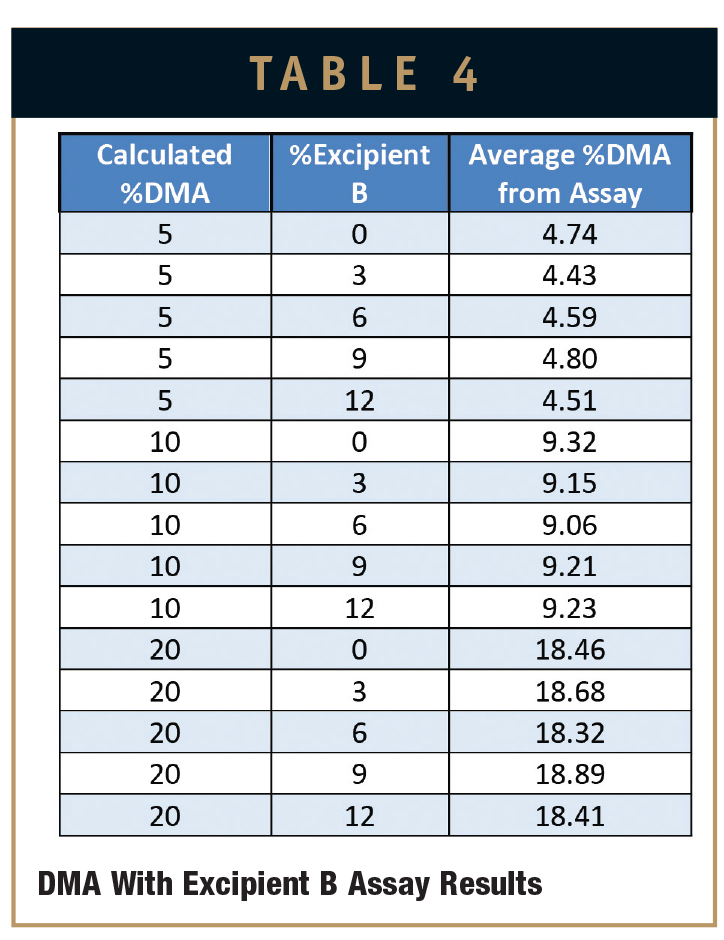 Plotting excipient concentration (%) vs. cumulative release of DMA (mg) for these samples allows the prediction of how much cumulative DMA will be delivered after 14 days to a physiological environment for a given percent composition of DMA and Excipient A or Excipient B cured into MED-4840 (Figures 1 & 2). 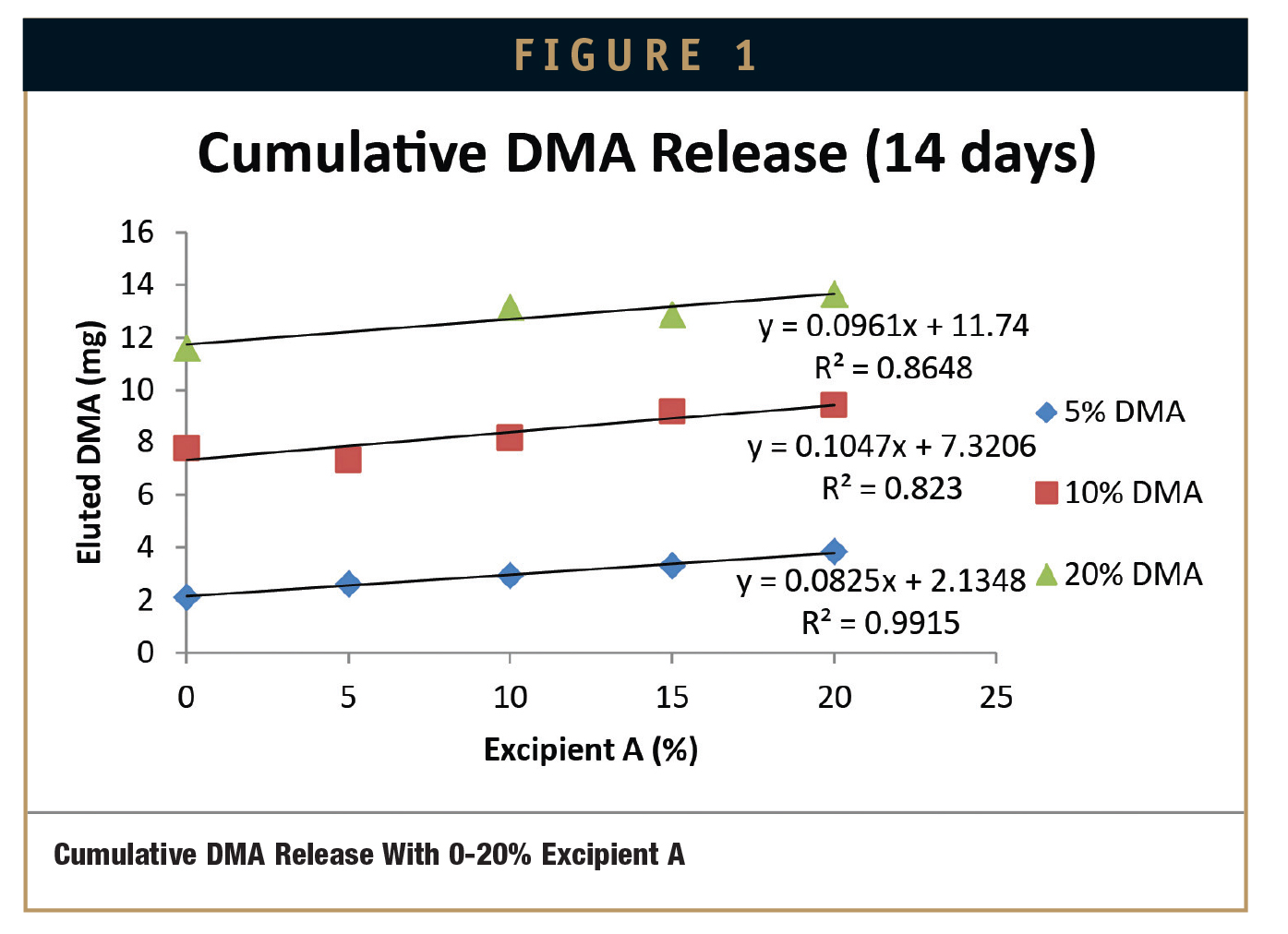 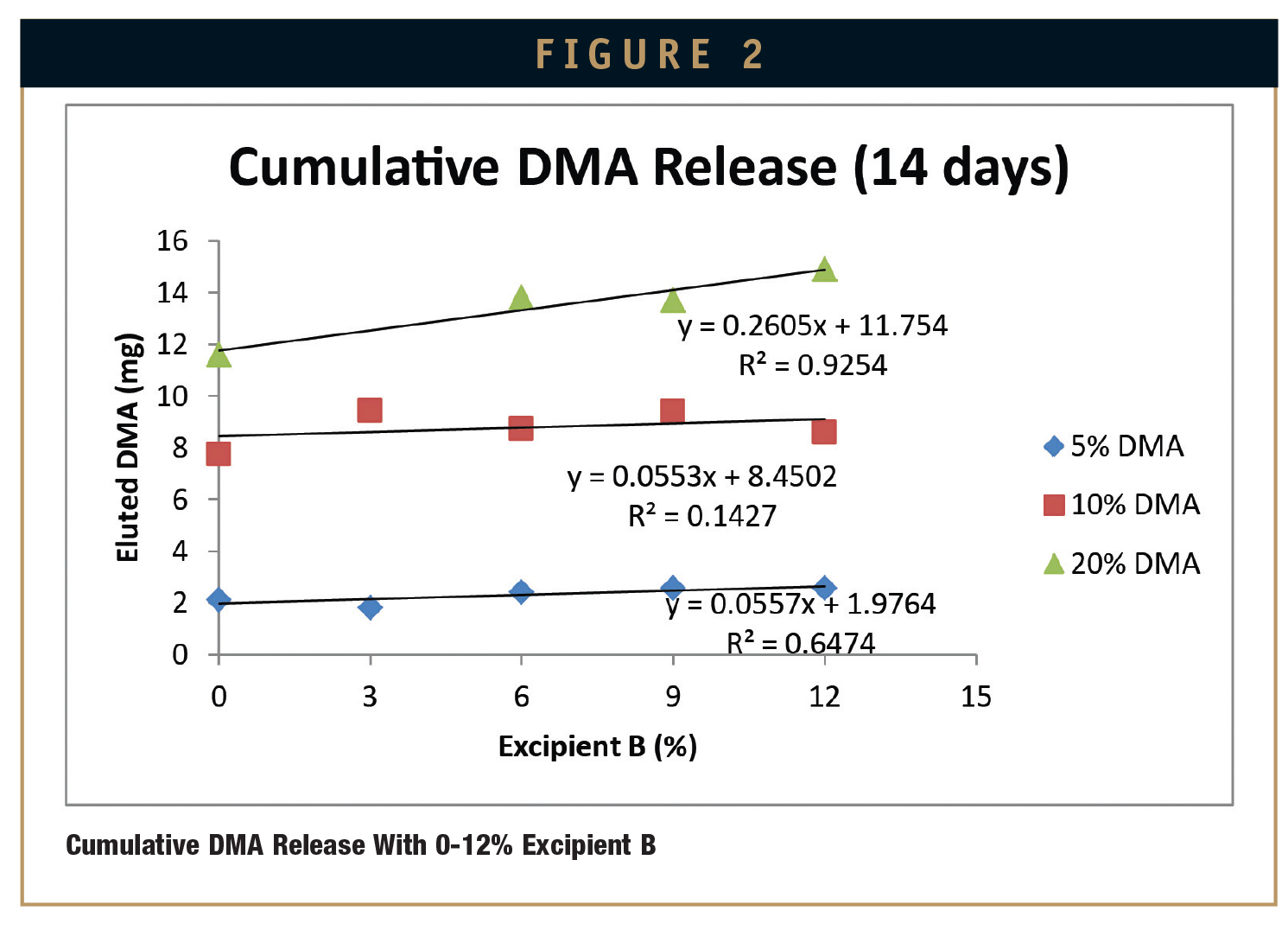 The release of the drug DMA from a silicone matrix into a sodium phosphate saline buffer solution at 6.0 pH is dependant on several factors. Some of these factors are DMA quantity, excipient type, excipient quantity, physical properties of the silicone matrix, surface area, and temperature. While this experiment was designed to limit these variables (using a constant temperature water bath, etc), it is hypothesised that one dynamic factor is surface area. As DMA and excipients are released from the silicone matrix, voids may be left in their place (Figure 3). 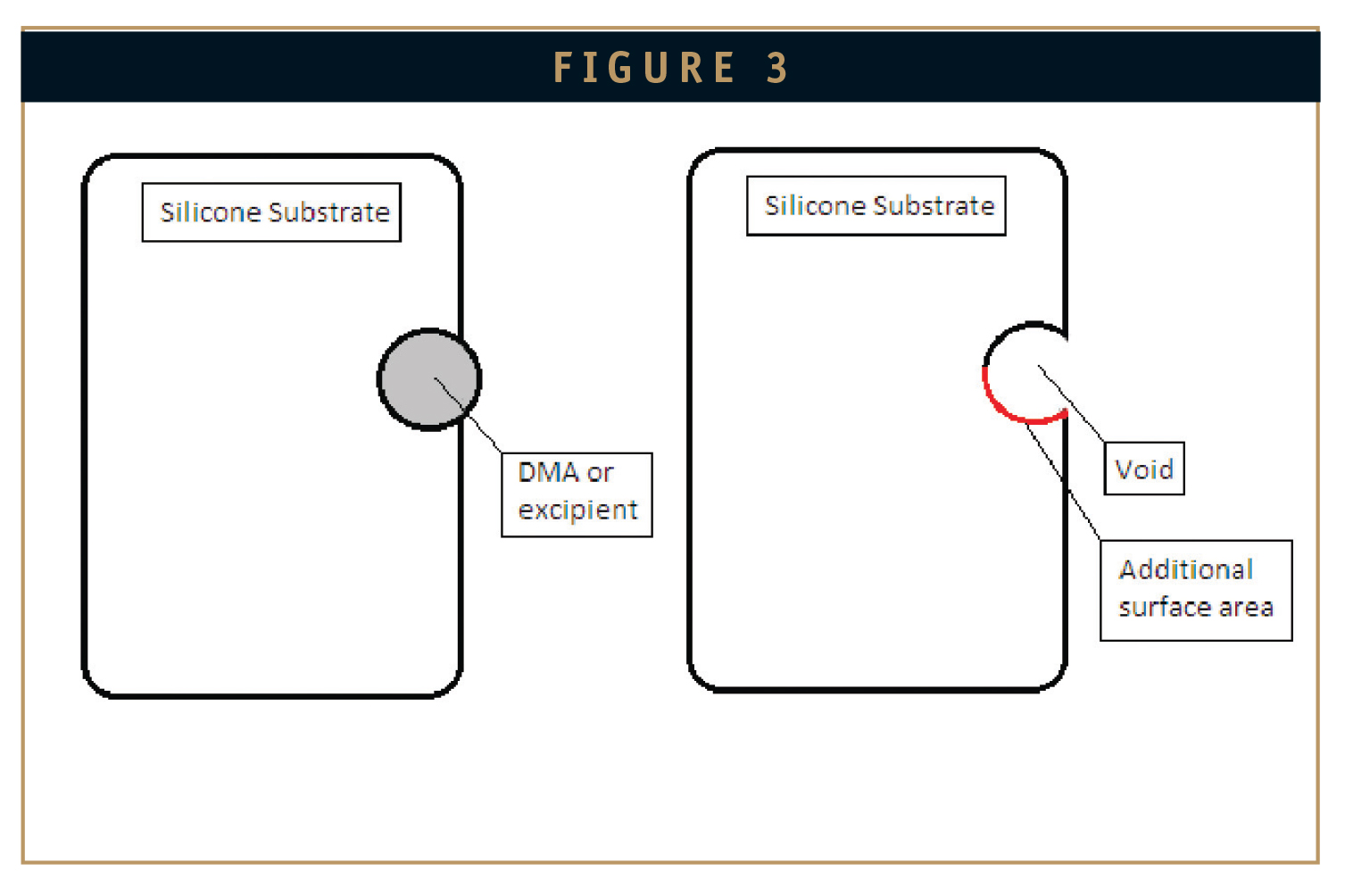 The presence of these voids would effectively increase the surface area of the loaded silicone sample, which in turn would expedite the release of the remaining DMA and excipients. This is an example of just one of the dynamic variables that affect the release rate of a soluble substance embedded in a silicone matrix. Other unknown factors affecting DMA release are sample homogeneity, and the size of DMA aglomerates present in the silicone matrix. 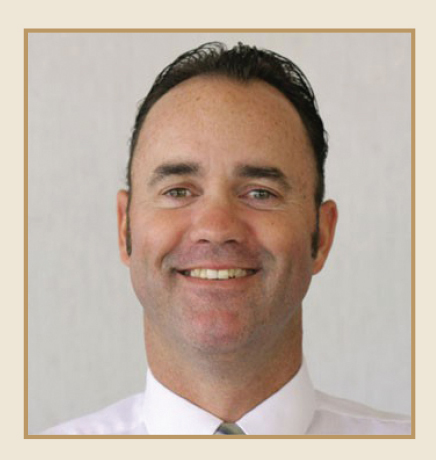 Brian Reilly is the Marketing & Sales Director for Medical Implants at NuSil Technology LLC. He earned his BS in Biological Sciences from Cal Poly San Luis Obispo before coming to NuSil, where he has worked for over 15 years. He began this career in the R&D department formulating and developing silicone elastomers and adhesives. From there, he moved into his current role in Marketing & Sales. 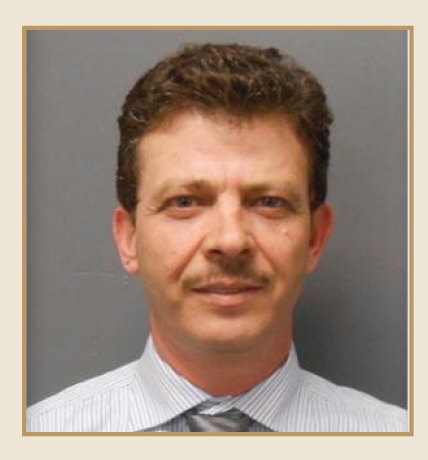 Mustafa Al-Azzam is Quality Assurance Manager at NuSil’s silicone manufacturing site in Bakersfield, CA. Over the course of his career with NuSil, which began in 1999, he has achieved Six Sigma Green Belt and ASQ Certified Auditor qualifications. He earned his Bachelor of Science in Chemistry from Fresno State University. 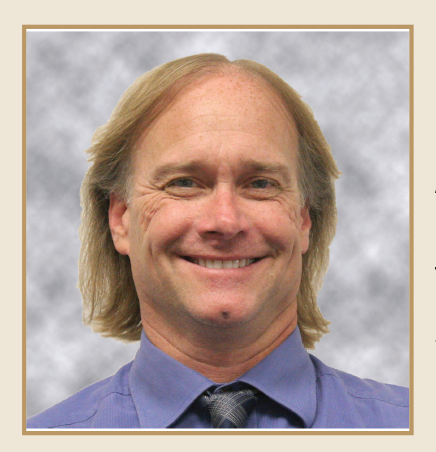 Robert Kivlin has worked in Quality Assurance at NuSil Technology since 2001. He is an ASQ-certified Quality Engineer and earned his Bachelor of Science in Biochemistry from the University of California, Santa Barbara.