Drugs for serious fungal and microbial infections currently require intravenous administration at doses that are associated with significant toxicity. Orally administered, encochleated formulations of broad-spectrum fungicidal and anti-microbial medications may provide delivery of anti-infective drugs at therapeutic levels while minimizing drug-associated side effects. This mode of administration may also be applicable to other types of drugs that may be toxic at therapeutic doses.

Fungal diseases present ongoing serious clinical challenges worldwide. These diseases include invasive candidiasis and aspergillosis, associated with 20% to 40% and 20% mortality rates, respectively. Opportunistic infections caused by cryptococcosis remain the most common cause of fungal disease- related deaths, occurring most frequently among HIV-infected individuals, those taking high doses of corticosteroid medications or undergoing chemotherapy, and in patients with immunodeficiencies, and some hematologic disorders.

Among HIV-infected individuals, about 1 million cases and 625,000 deaths from cryptococcosis occur annually due to the development of central nervous system disease. In the US, candida remains the fourth most common cause of healthcare-associated bloodstream infections, and according to the CDC, in some hospitals, it is the most common cause, with infections tending to occur among the sickest of patients. Some candida strains have become increasingly resistant to first-line and second-line anti-fungal treatment agents, with recent data demonstrating a marked shift among infections toward candida species with increased resistance to antifungal drugs, including azoles and echinocandins.1

While the drugs amphotericin B (AmB) and azole antifungals have provided effective therapy, the high incidence of infusion-related toxicity and nephrotoxicity with amphotericin B and the emergence of fluconazole-resistant strains of candida have prompted the search for therapeutic alternatives. Due to its toxicity, use of amphotericin B to treat a wide range of systemic fungal infections remains generally restricted to severe fungal infections in critically ill, or immunocompromised patients, but it remains the first-line therapy for invasive mucormycosis infections, cryptococcal meningitis, and certain aspergillus and candida infections.

The relatively new drugs echinocandins (anidulafungin, caspofungin, and micafungin) have been established in clinical guidelines and practice as primary treatment options for moderately to severely ill patients with invasive candidiasis. But while the echinocandins are among the best tolerated and safest class of available antifungals, acquired resistance to them has been increasingly reported, especially in C. glabrata.

Unique approaches to treating these diseases that may provide effective antifungal treatment while minimizing severe toxicities include the development of such agents in unique formulations. Matinas BioPharma, a clinical-stage biopharmaceutical company focused on identifying and developing anti-fungal and anti-bacterial therapeutics for life-threatening infections, is currently testing its most advanced product, MAT2203, an orally administered, encochleated formulation of the broad-spectrum antifungal medication amphotericin B (AmB) for the treatment of serious and life-threatening fungal infections. 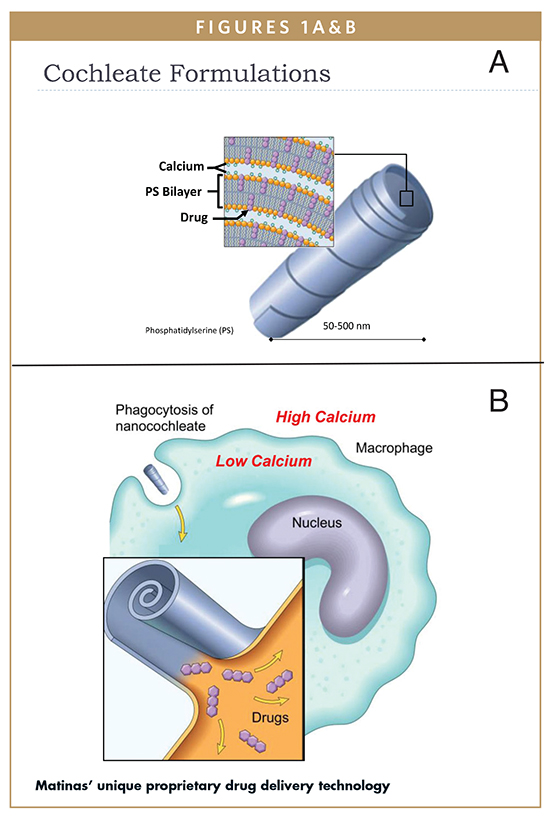 Developed by Raphael J. Mannino, PhD, Matinas’ Chief Technology Officer, encochleation technology provides a unique means of formulation for drugs formerly deliverable only intravenously. Cochleates have a multilayer crystalline, spiral structure with no internal aqueous space that forms when a series of solid lipid sheets roll up and capture drug molecules in between the sheet, a process referred to as encochleation.2,3

Encochleation technology involves combining calcium and soy-derived phospholipids (PS), two naturally occurring materials, through a controlled crystallization process to envelop an Active Pharmacological Ingredient (API), such as AmB. The resulting lipid-crystal encochleated drug formulation of nano-sized particles, once administered, are engulfed by macrophages or other phagocytic cells. Lower calcium levels inside the macrophage compared to the high level of calcium outside the macrophage triggers the cochleate to open, thus releasing the drug inside the cell. Because the drug is sequestered in the solid cochleate particle or in the target cells, the rest of the body is protected from the toxicity of the desired medication.

In summary, the unique structure of the cochleate protects the compounds inside even though the outer layers of a cochleate may endure exposure to harsh environmental conditions or digestive tract enzymes. Cochleate technology allows for oral administration with targeted delivery to infection sites, as the cochleates are taken up by macrophages, which then travel to the site of infection and release the drug. Toxic drugs are sequestered until transported to the site of infection, thus decreasing their side effects, and potentially allowing efficacy at lower doses than achievable by other means of administration.

Preclinical study results presented at the 2015 American Society for Microbiology’s Interscience Conference of Antimicrobial Agents and Chemotherapy and International Society of Chemotherapy’s International Congress of Chemotherapy and Infection (ICAAC/ICC 2015) showed encochleation technology’s potential in delivering effective drugs at non-toxic levels to infected tissues. In the preclinical study, mice were infected with cells of Candida albicans. After infection, they were treated for 14 days with control, DAmB (Amphotericin B deoxycholate) 2 mg/kg intraperitoneal, or CAmB (MAT2203) 10 mg/kg oral.

MAT2203: ENCOCHLEATED FORMULATION MITIGATES SIDE EFFECTS & TOXICITY OF AMPHOTERICIN B

Study results showed that in Candida-infected mice, MAT2203 was taken up from the gastrointestinal (GI) tract resulting in significant concentrations of AmB in targeted tissues, but undetectable AmB levels in plasma. CAmB remained at 2x to 3x the minimal inhibitory concentration (MIC), whereas DAmB causes tissue levels to increase to 4x to 40x the MIC. The authors concluded that in Candida-infected mice, orally administered CAmB is taken up from the GI tract resulting in significant tissue concentrations above the MIC level. Contrary to DAmB, concentrations of AmB from CAmB accumulate rapidly in the tissues without escalating to extremely high levels during the second week of treatment, potentially mitigating side effects and toxicities.4

Based on these results, Matinas Biopharma, in collaboration with the National Institutes of Health/National Institute of Allergy and Infectious Disease (NIH/NIAID), is currently enrolling patients in a Phase IIa open label clinical study of MAT2203. The study will assess the efficacy, safety, and pharmacokinetics of oral cochleate amphotericin B (CAMB) in the treatment of mucocutaneous candidiasis infections in patients who are refractory or intolerant to standard non intravenous therapies, with initial data anticipated in 2016.

Specifically, NIAID researchers, led by Principal Investigator Alexandra Freeman, MD, of NIAID’s Laboratory of Clinical Infectious Diseases, will proceed with a Phase IIa, open-label, dose-titration study to assess the efficacy, safety, tolerability, and pharmacokinetics of MAT2203 in hereditary immune-deficient patients with a recurrent or chronic mucocutaneous candidiasis infection (esophageal, oropharyngeal, vaginal) that is refractory to standard or tolerated non-intravenous therapies. These patients often develop candida infections that are resistant to treatment with standard anti-fungal regimens. This study is designed to enroll up to 16 patients, and will include 14-day dosing and evaluation periods. Depending on clinical response during each treatment period, investigators will have the ability to continue the effective dose for 28 total days or increase the dose of MAT2203 up to two times and extend treatment to a maximum of 54 days.5

Matinas is also developing a lipid-crystal nanoparticle formulation of amikacin, MAT2501, the company’s lead antibacterial compound, an aminoglycoside antibiotic used to treat severe, hospital-acquired infections, including Gram-negative infections. Generally used as a last resort medication against multi-drug-resistant bacteria, the drug is administered either IV, intramuscularly, or through a nebulizer.

All aminoglycosides carry the potential risk of nephrotoxicity, with the risk being greatest in those with impaired renal function. A reduction in dosage is usually necessary if evidence of renal dysfunction occurs. Treatment with aminoglycosides can cause neurotoxicity in the form of hearing loss, numbness, skin tingling, muscle twitching, and convulsions; therefore, a need exists for an aminoglycoside formulation that would reduce the potential for this toxicity and allow for oral dosing.

On December 31, 2015, the company filed an Investigational New Drug (IND) application with the US FDA for, MAT2501. Company president and CEO noted that in “In preclinical studies, MAT2501 was shown to have oral bioavailability and provide targeted delivery of the powerful antibiotic, amikacin, directly to the site of infection in both disseminated non-tuberculous mycobacterium (NTM) infections as well as in NTM-lung diseases.” Upon its review, the FDA gave the go-ahead to start the proposed Phase I study on January 29, 2016.

MATINAS FAST-TRACK TO A SOLUTION FOR MULTI-DRUG-RESISTANT INFECTIONS

To date, the FDA has granted MAT2203 Qualified Infectious Diseases Product (QIDP) status with Fast-Track status for the treatment of invasive candidiasis and aspergillus, as well as QIDP for MAT2501, for the treatment of non-tuberculous mycobacterium (NTM) infections. Qualified Infectious Disease Product (QIDP) designation, provided under the Generating Antibiotic Incentives Now Act (GAIN Act), offers certain incentives for the development of new antibacterial or antifungal drugs, including eligibility for Fast-Track, priority review and, if MAT2203 and MAT2501 are ultimately approved by the FDA, eligibility for an additional 5 years of marketing exclusivity.

As MAT2203 and MAT2501 proceed along the clinical development pathway, Matinas continues to develop encochelated formulations for other drugs. Atovaquone, an alternative agent for prophylaxis and treatment of Pneumocystis pneumonia (PCP) and toxoplasmosis, is limited clinically by poor patient tolerability, saturable oral absorption, and nonlinear pharmacokinetics. PCP, an opportunistic fungal infection of the lung, is often lethal if not adequately treated. PCP typically affects patients who are immunocompromised, such as patients with HIV or who have undergone medical therapies involving chemotherapy, immune-suppressants, or a transplant.

In a preclinical study by Kumar et al conducted to determine the pharmacokinetics and efficacy of encochleated Atovaquone (CATQ) in immunocompromised mice infected with P. murina, CATQ performed significantly better than commercially available atovaquone, providing an atovaquone formulation promising for both treatment and prevention of PCP. Further studies of CATQ are underway.6

Matinas BioPharma’s technology provides three unique benefits, including oral administration and bioavailability of medicines, which today are only able to be delivered intravenously, multi-organ protection from otherwise highly toxic compounds in a stable, solid particle, and delivery directly to sites of infection and/or inflammation, with the potential to achieve rapid tissue penetration, days ahead of therapeutic availability with injected drugs.

While Matinas BioPharma is initially focusing on using the technology to improve the safety and oral bioavailability of toxic antimicrobial therapeutics, promising preclinical and Phase I data, combined with the broad applicability of this delivery platform, indicates potential success in reformulating many drugs to take advantage of the oral bioavailability, improved safety, and targeted delivery made possible using cochleates. 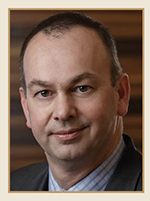 Roelof Rongen is the CEO and a Co-Founder of Matinas BioPharma. He is also Founder and Chairman of Essential Fatty Acid Therapeutics. Previously, he was EVP North American Operations for EPAX, and held various positions at Reliant Pharmaceuticals, where he launched Omacor®/Lovaza®. Mr. Rongen earned his MBA from Northwestern University and a graduate degree in Molecular Sciences from Wageningen University. He can be reached at (908) 443-1860 or rrongen@MatinasBioPharma.com.