In the fast-moving pharmaceutical industry, change is the only constant. To keep up with market developments, small molecule manufacturers must first understand the trends. The past 2 decades have been a period of major change in the pharmaceutical manufacturing sector. The end of the traditional blockbuster model, the patent cliff, the burgeoning biologics sector, and the shift to niche patient populations as the move begins toward more targeted therapies, have all contributed to the drive for change among drug makers, and in the contract manufacturing sector in particular.

Determining how to react to these trends and create a business model that is flexible enough to adjust to whatever the next few years may bring is one of the challenges faced by many global contract manufacturing organizations (CMOs), and Cambrex was no exception.

As a first step, the company undertook an extensive research program throughout 2016 to assess what was happening in the small molecule market, particularly in terms of volume demand, FDA approvals, and product lifecycles. Once it had established the dominant trends, Cambrex could tailor its investment strategy to give it the necessary flexibility in both capacity and capabilities.

The first thing the research showed was that although biologics may be making the headlines, small molecule drugs continue to form the backbone of the pharmaceutical industry. Not only is innovation in the small molecule sector at an all-time high, the level of US FDA approvals for new molecular entities (NMEs) in 2015 was at its highest since 1999 (Figure 1). And of the 45 NMEs approved this past year, by far the largest proportion (33 out of 45) were small molecules, while only 12 were biologics. Furthermore, there are more small molecules in every phase of drug development than at any point in the past 15 years (Figure 2). 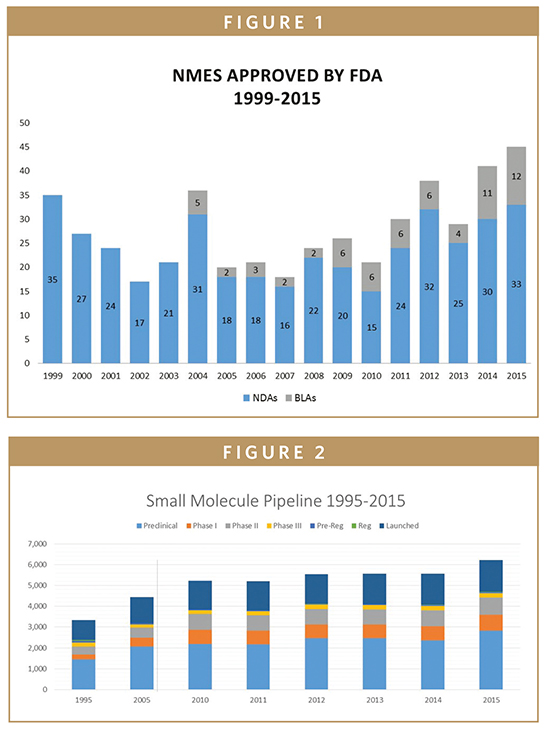 Analysis of the 2015 NME approvals clearly showed an increasing focus on rare diseases: 21 of the novel drugs approved (just under half of the total) were for rare or orphan diseases that affect 200,000 or fewer Americans and for which there are limited or no treatment options available. Whereas once small molecule development was looking for the classic blockbuster, used to treat millions of patients with chronic conditions, the versatility of the products allow the model to evolve toward more targeted therapies. This is especially relevant for orphan indications, or in the specific oncology sectors. The data generated by the Cambrex research indicates how significant this change has been. In 1999-2000, the average patient population targeted was 13 million, representing indications such as obesity, diabetes, conjunctivitis, gastro-esophageal reflux disease (GERD), and hyperlipidemia, but by 2014/15, this had fallen to just 6 million as the drugs are being used for conditions such as multiple myeloma, cystic fibrosis, and thyroid cancer.

To track the evolution of APIs by volume demand, Cambrex looked at the 408 small molecule drugs launched in the US throughout the past 15 years. An interval period of 5 years was chosen to give enough data points for a quantitative study. To avoid any annual anomalies, the data from two consecutive years was combined, giving a final data set of 209 small molecules (around half the total number of approvals), which the company believed would be sufficient to identify any emerging trends.

The study was also limited to the US market to exclude potentially misleading data arising from differences in disease prevalence/epidemiology in more populous markets, such as India and China, that can result in large uptake of some products. However, it can be assumed that volumes for the five major European markets and Japan would be similar to those recorded in the US. It is also important to note that the research looked at NCEs (New Chemical Entities) only, and did not take into account reformulations, Abbreviated New Drug Applications (ANDAs), or line extensions.

The trend in volume evolution showed a clear decline in the numbers of NCEs with volume ranges above 10 metric tons (mt) and below 10 kg, while those reaching their peak volumes in the ranges 10 kg to 1 mt and 1 to 10 mt are stable or increasing. Of the 27 NCEs launched in 2014/2015, 12 are forecast to reach volumes of 1 mt at their peak. The research shows that the spread of volumes is becoming narrower and that there is more clustering around the middle volume range now compared with 15 years ago (Figure 3). 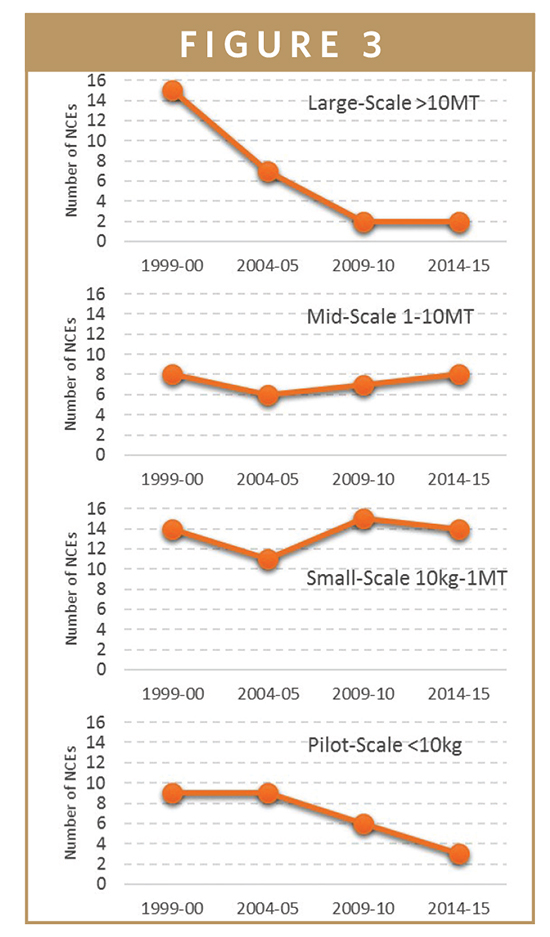 One conclusion that can be drawn from this is that the peak volume demand (at least within the US market) seems to be in the range of 1 to a few tens of metric tons of API. The numbers of drugs with a peak demand greater than 100 mt has dropped, as have those below 10 kg.

However, it would be wrong to assume that a small patient population means a small annual volume of the API; sometimes it means exactly the opposite. Small molecule drugs that are in the region of 1- to 10-mt volumes can be blockbusters in the sense they can command in excess of $500 million in sales. This is especially true for drugs used in oncology indications, where the pricing per pill is orders of magnitude higher than drugs used in more chronic indications, such as hyperlipidemia and diabetes. Similarly, not all orphan drugs are low volumes; some are taken in high doses and consumed daily.

There were no findings from the research that showed significant changes in the potency of the APIs nor in the size of the dosage. The majority of drugs are still in the 1 to 100 g per patient per year range, although there was a slight increase in the number of lower dose NCEs below 1 g per patient per year, according to the study (Figure 4). The data does not show any real trends in reduced dosages to patients, and although often spoken about in the industry, the trend to targeted medicines does not show up in the data yet with respect to the dose that patients are actually taking. 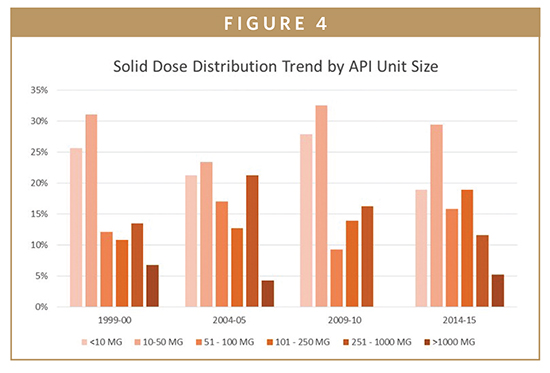 Similarly, there has also been little change in tablet unit sizes: 10 to 50 mg continues to be the most frequent dose size, although the 50- to 250-mg size range is gradually increasing in popularity. This highlights one of the reasons for the continued prevalence of small molecule drugs is their ability to be taken orally, which is clearly the preferred method of administration from the patient’s point of view. Patient centricity and compliance are currently important areas of focus in the pharmaceutical industry, and the flexibility and versatility of small molecules can be key to both. Drug formulators have a long familiarity with small molecules (since the 19th century), and technologies developed over the many years have afforded a number of dosage types from which patients can benefit, such as tablets, capsules, and inhalation through devices. Recent developments in oral dosing allow for innovations, such as delayed, controlled, and modified release to ensure that patients’ ease of consumption is maximized. Drug developers are acutely aware that the lesser the burden on the patient to take a dose, the greater the chance of ongoing compliance.

For biologic-based drug development, although progress is being made with product development, there is some way to go before products can have the same “ease of use.” Currently, the route of administration is typically injection, and products need to be kept refrigerated, which adds logistical considerations for both shipping and storage. The cost of dose manufacture for biological medicine is still disproportionately high with respect to small molecules, not just for the API itself, but the costs of vials and prefilled syringes dwarf those of blister packs and pill bottles used to package small molecule-based products.

Taking all these factors into account, there are still plenty of growth opportunities in the small molecule market, but key to contract manufacturers remaining competitive will be the ability to be flexible enough to be able to produce APIs in a range from kilograms to hundreds of metric tons to satisfy the wide variety of demand from customers. The trend highlighted in the research toward concentration of average volume requirements actually is a great opportunity for CMOs, as service companies are used to handling multiple customer projects with varying volume requirements and chemistries. Unlike captive manufacturing at big pharma, CMOs have to be flexible and adapt to ever-changing demands of the marketplace.

The trend for pharmaceutical companies to close captive API facilities is poised to continue due to historic reliance on blockbusters, which were 100-mt products and now lack the correct scale of manufacturing capabilities. CMOs will continue to see more outsourcing opportunities as they are better placed to manufacture the coming pipeline of small molecule APIs. However, it will become more important for CMOs to offer a range of manufacturing options to cover the life cycle of the drug on the market – from introduction to maturity, as well as the option to manufacture key late-stage intermediates and starting materials, should security of supply or regulation be a prerequisite of customer demand.

The reformulation of existing drugs is also a key growth area that deserves particular attention. Supply of APIs into repurposed or reformulated drugs requires CMOs to act quickly and responsively. This may be the rapid supply of small volumes of API for product development and launch purposes or the technical and regulatory expertise to support the customer during registration and commercial supply. Throughout the past 5 years, Cambrex has invested $150 million in small molecule capacity and infrastructure. By evaluating the market demands through this research, it has expanded its large-scale API facility in Charles City, IA, and is also planning to add 300-gallon and 500-gallon reactors to its small-scale plant in 2017.

This investment closely follows the trend seen in the industry and by establishing the right capacity and capabilities demanded by the market, allows the company to handle a variety of projects and chemistries while having the ability to be flexible in the supply chain and counter any volume fluctuations.

Flexible assets with the ability to manufacture multiple products at multiple scales in the same facility is crucial to win customer projects from the increasing commercial and clinical pipeline. Continually investing in manufacturing capacity is critical to plan ahead for the next generation of small molecule drugs. Pilot-scale, midscale, all the way to large-scale to cover APIs and advanced intermediates will enable security of supply and cover the fluctuations in demand.

In the constantly changing world, a CMO must be flexible to match these changes. Far from the rise of biologics and monoclonal antibody therapies signing the death knell to small molecule medicines, the market is flourishing. In oncology, pioneering drug classes, such as protein kinase inhibitors, have revitalized the existence and importance to modern medicine, and the challenge is to predict the changes and have the ability to respond. 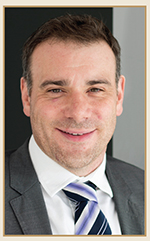 Dr. Matthew Moorcroft is the Vice President of Global Marketing and Communications for Cambrex. Prior to joining Cambrex, he worked for Lonza and held a number of roles, including Head of Global Marketing, VP Generics and Biosimilars, and Head of Strategy, Pharmaceuticals and Biologics. After gaining experience in the custom development and manufacturing business, he developed models for biosimilars and generic drug products. He has 15 years of commercial and scientific experience in the pharmaceutical, biotechnology, and chemical industry covering both innovative and generic medicines. Dr. Moorcroft earned his PhD in Chemistry from the University of Oxford.