We know the cost of developing a prescription drug is estimated at $2.6 billion, and takes 10 to 15 years from target selection to drug approval with an overall success rate around 10%.1,2 Furthermore, only about 35% of drug discovery projects succeed in delivering experimental drugs ready for clinical testing.3 In order to improve productivity, companies have been leveraging computational chemistry to screen and identify potential drug candidates at the earliest stages of drug discovery. These methods are a viable approach to shortening development timelines and achieving better success. 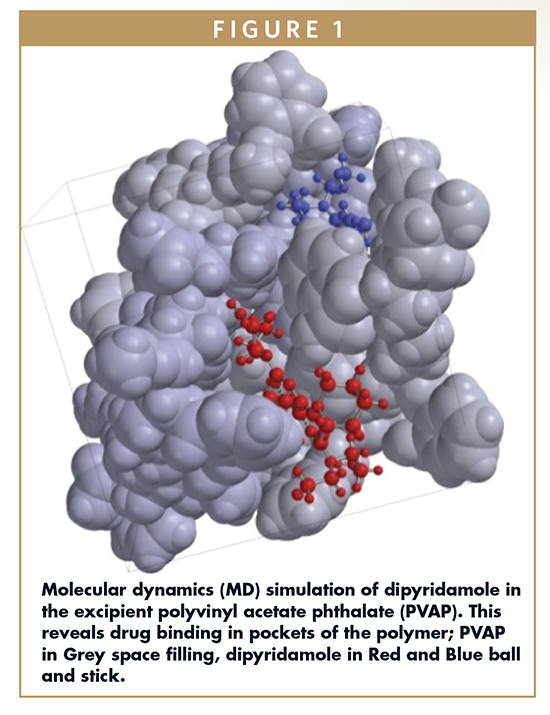 Throughout the past decade, the speed and performance of computational modeling methods using quantum mechanics (QM) and molecular dynamics (MD) has significantly improved allowing for rapid in silico screening of drugs in more complex environments. To further improve success rates and reduce development time and cost, early consideration of the drug delivery method and formulation approaches should begin in parallel with drug discovery and development programs.

Throughout the past few years, Patheon has taken this approach a giant step forward, utilizing MD and QM simulations to support efficient and robust formulation development. As a pioneer of this approach, Patheon uses computer modeling simulations in the early phases of the development process to 1) rapidly identify candidate excipients for drugs, 2) predict key experimental properties of the formulations, and 3) determine drug loading and formulation stability.

A 2014 paper from Patheon’s ORP division scientists discuss the use of predictive modeling in formulation development and directed product analyses to significantly reduce time to market and overall product costs. The paper states that to enable this approach in pharmaceutical formulation, there is a strong need for a deeper mechanistic understanding to support efficient formulation activities for poorly soluble molecules.

The approach enables formulators to efficiently select and develop an optimum set of materials and methods for use in a solid dispersion, and inform why these choices are successful. The approach is especially valuable for BCS Class II and Class IV drugs, which can demand unique and challenging formulation methods.4

Selecting the optimal system for formulation development by traditional methods can take a vast amount of time in a laboratory and can be extremely costly. By understanding the simple chemical structure of a drug and candidate excipient(s), scientists can rapidly predict what might otherwise be measured in the laboratory. Broadly, the advantages of this approach are to significantly reduce costs and improve efficiency and accuracy prior to starting laboratory studies.

MD and QM simulations are a powerful tool for accomplishing the aforementioned. They provide insight into molecular-level behavior and interactions between drugs and excipients. Direct calculation and visualization of these interactions provide valuable insight into the formulation approach. For example, the glass transition temperature (Tg) of a drug-excipient mixture as a function of drug loading provides a strong indicator of the thermodynamic stability of the formulation. Infrared (IR) spectra can be used to identify the molecular level moieties involved in these interactions. Having a valid computational approach to predict the Tg and IR spectra of drug-excipient systems can be extremely insightful and reduce the amount of laboratory screening experiments required.

The combined approaches provide the ability to observe and visualize molecular-level behavior and further predict relevant thermodynamic information, such as phase transitions (eg, glass transitions) and infrared spectra. These predicted values allow for the construction of models for application to new drug-excipient systems prior to embarking on time-consuming laboratory experiments.

Methods
The structures of the drugs and polymers (excipients) evaluated in this study are shown in Figure 2. MD simulations were performed on drug excipient mixtures with varying drug loadings.5 Interactions between drug and polymer are readily visualized as a function of drug loading as shown in Figures 3 and 4. These figures provide an illustration of how increased drug loading leads to drug-drug interactions. 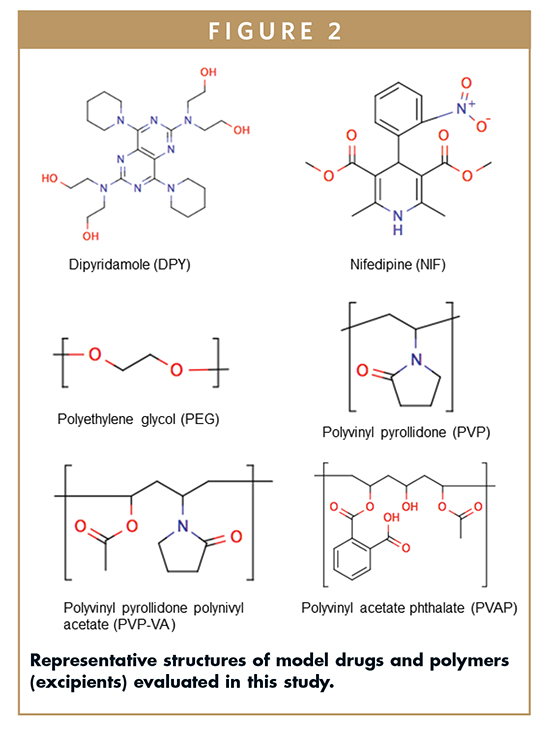 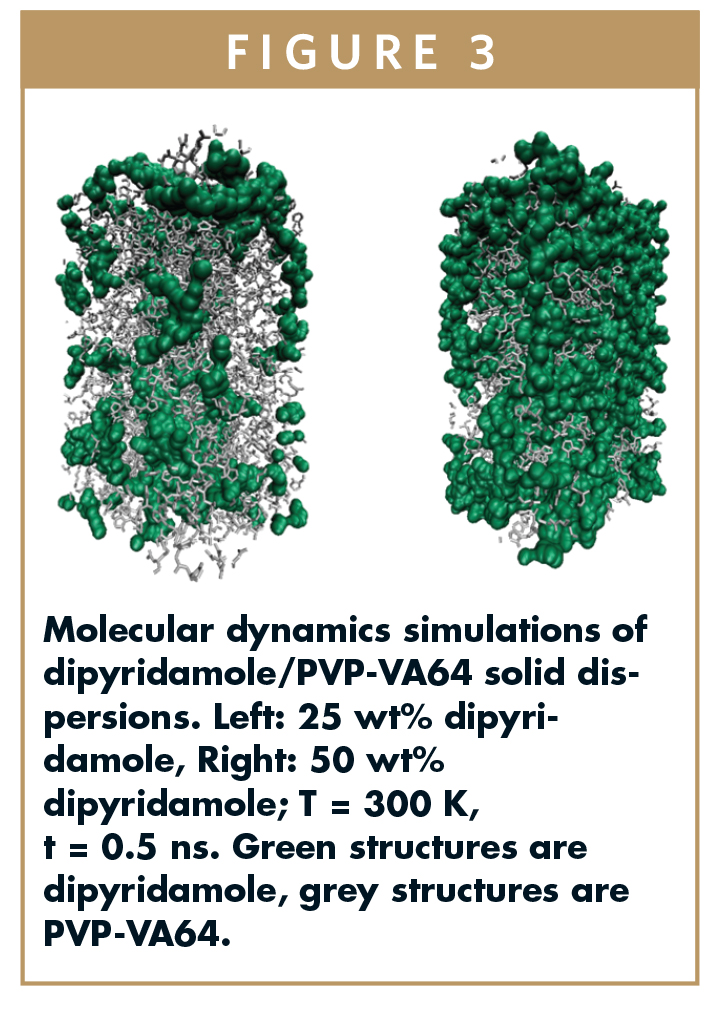 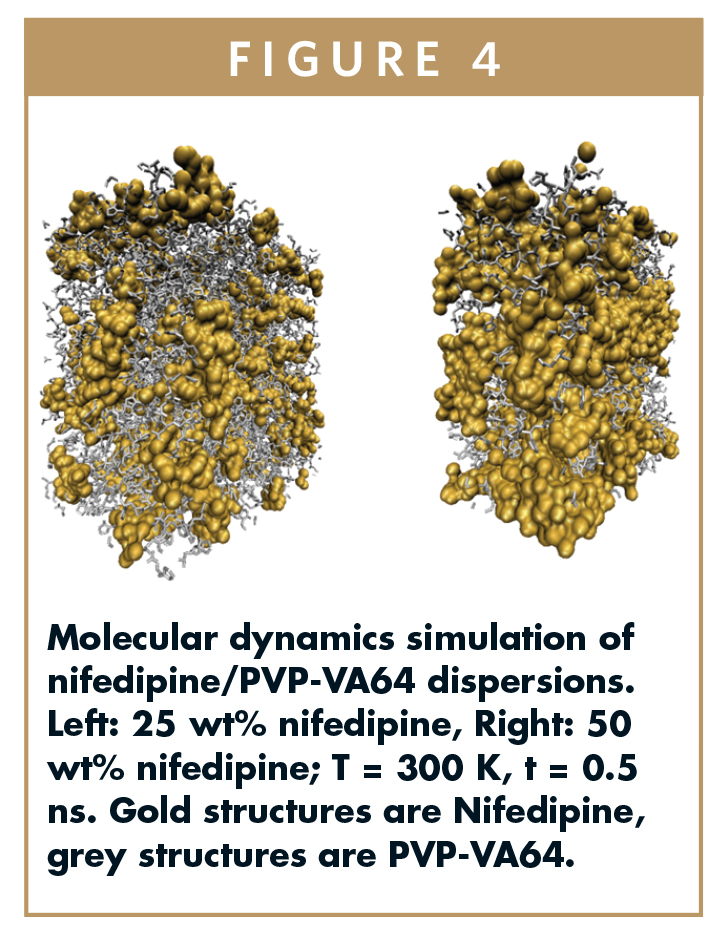 To calculate thermodynamic properties, such as Tg, the temperature of the simulations were started at 500K and cooled to 250K in 10K intervals. Cooling cycles were done using an NVT ensemble (constant volume), and equilibration was done using an NPT ensemble (constant pressure). The production run used to calculate density at each temperature was an NPT run of 500,000 steps, with a step size of 1 femtosecond. Molecular dynamics simulations were conducted on pure component and drug-polymer dispersion systems. By collecting density data at periodic temperature intervals, a breakpoint in the temperature/density plot is observed. It is at this point that the Tg can be inferred. A representative example for dipyridamole in PVP-VA64 is shown in Figure 5. 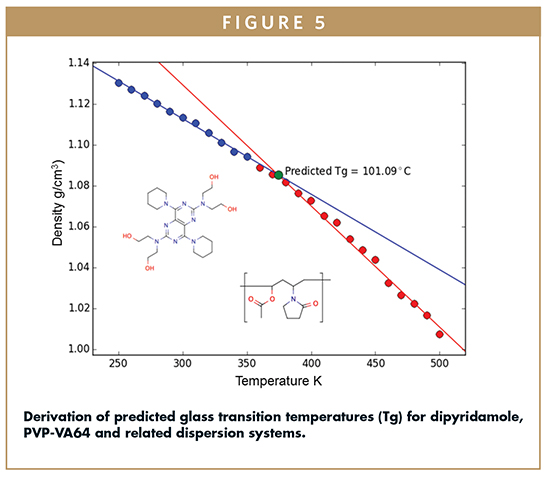 Tables 1 and 2 provide calculated and experimental data for an array of pure components and spray-dried drug-polymer dispersions. As can be seen, there is reasonable agreement between calculated and experimental data for the pure components. Differences between the glass transition temperatures of the pure components and the dispersions is a result of intermolecular interactions between the drug and polymer. These interactions can be inferred from infrared spectra. 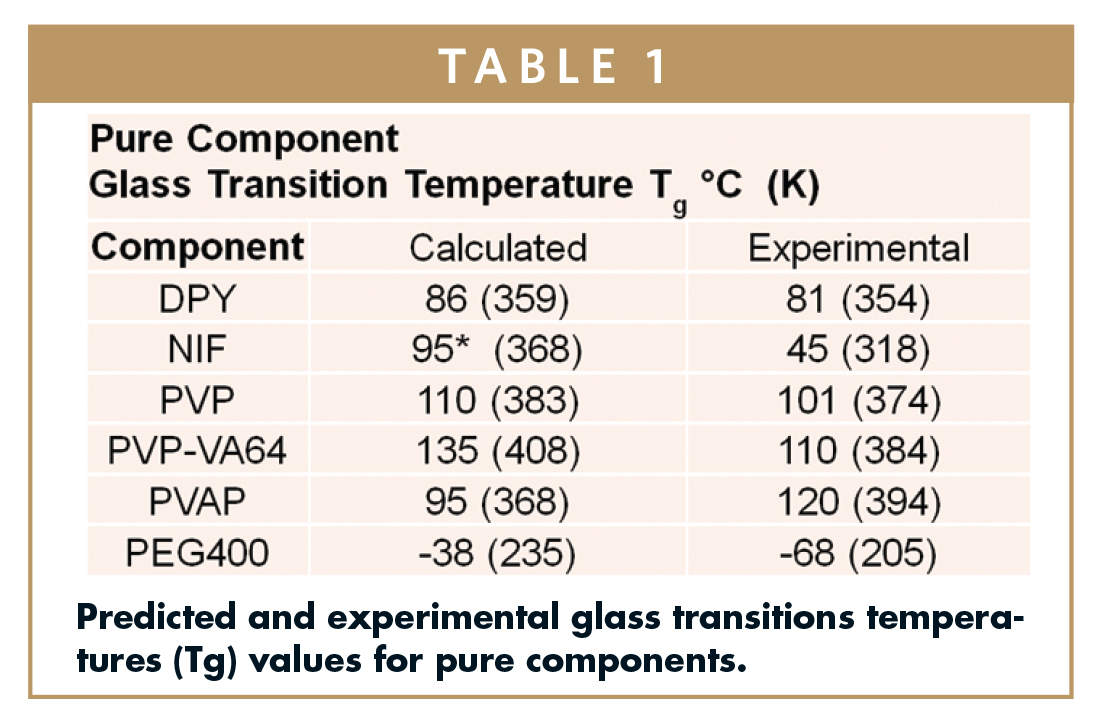 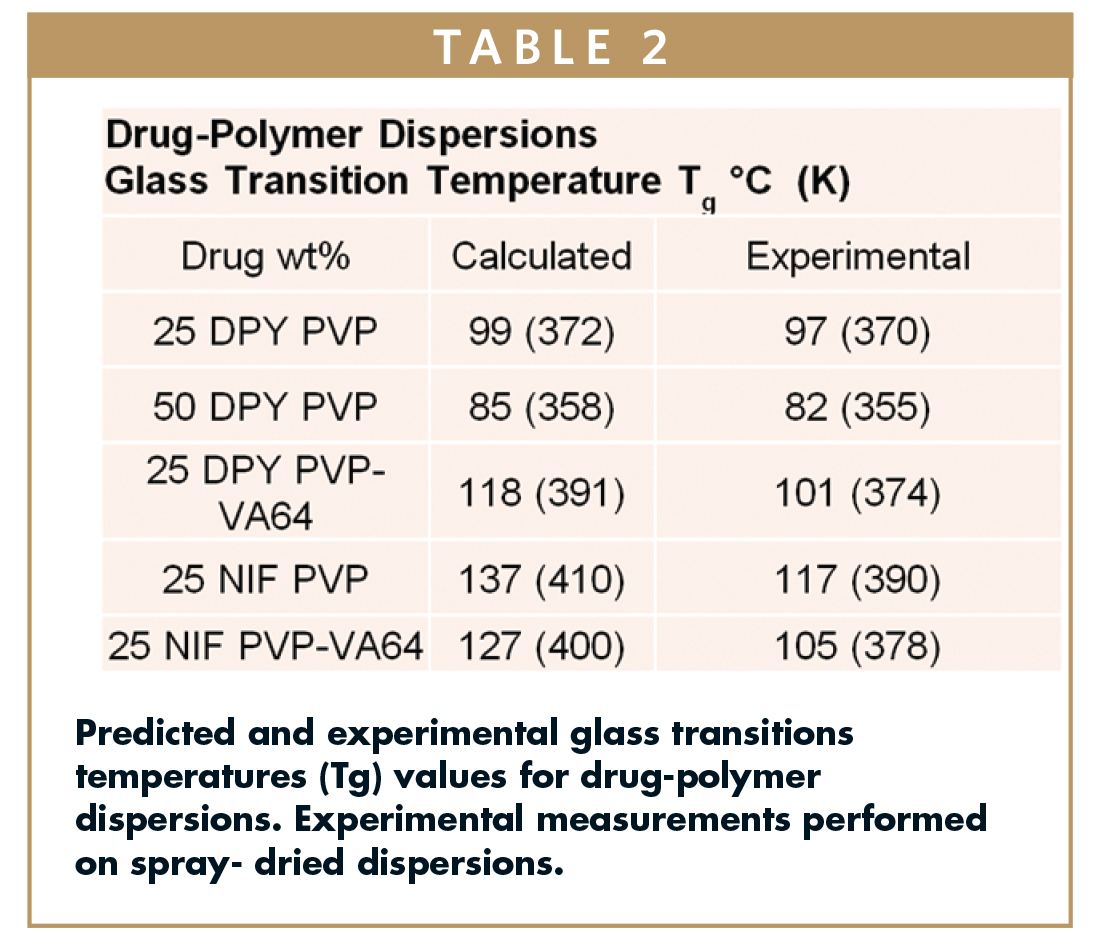 To calculate the infrared spectra quantum mechanical calculations, density functional theory (DFT) was chosen (EDF2 with the 6-31g* basis set). Experimental Fourier Transform Infrared (FTIR) spectra were conducted on pure amorphous drug. Spray-dried dispersions of the pure polymer and drug polymer dispersions were prepared as a function of drug loading to provide the validation data for the MD and QM models. 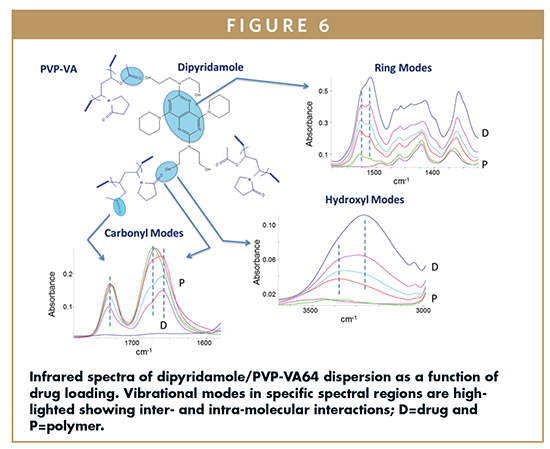 Computational methods such as QM and MD simulations are playing an ever-expanding role in drug discovery and development, and transforming advances in drug development at all stages. Consideration of drug formulation approaches at the very early stages of drug development promises to improve success rates and reduce development time and cost. Early consideration of the drug delivery method and formulation approaches should begin in parallel with drug discovery and development programs. QM and MD simulations provide key insights into the drug formulation process. With an increased understanding of drug-excipient interactions at the early stages of drug development, it becomes possible to select and design better molecules, reduce resources and costs, and significantly improve the success rate in bringing a drug to market.

Dr. Tom Reynolds is Principal Scientist at Patheon, PDS Global Sciences, where he is responsible for development of a drug formulation and solubilization technology platform that provides formulation options using computational methods. He has over 20 years of experience in research, development, and management of programs in nanotechnology, crystal growth, formulation, and computer modeling. He earned his PhD in Chemistry from Oregon State University.

Dr. Matthew D. Wessel is Principal Scientist at Patheon, where he is responsible for developing predictive computational approaches for solving drug solubility and formulation problems. Prior to Patheon, he was a Solutions Architect at Schrödinger, worked for Bend Research, and was an associate research fellow at Pfizer. He earned his PhD in Chemistry from The Pennsylvania State University and his BS in Chemistry from Washington State University.

Dr. Sanjay Konagurthu is the Senior Director, PDS Global Science, for Patheon. He has over 18 years of experience managing the development of drug compounds from the discovery interface through clinical and commercial manufacturing. His expertise spans a broad spectrum of therapeutic areas involving formulation and process development of drug delivery platform technologies including solubility enhancement and modified release. Sanjay has performed and managed the formulation and process development for a broad range of NCEs and lifecycle management of marketed products. He earned his Bachelor of Technology degree from the Indian Institute of Technology (IIT), Madras (Chennai), and his PhD from the University of Colorado, Boulder, both in Chemical Engineering.

Dr. Marshall Crew became the VP, Global PDS Scientific Excellence at Patheon after Agere Pharmaceuticals (where he was the President, CEO & Founder) was acquired by Patheon in 2015. Dr. Crew has devoted his career to improving oral bioavailability, developing innovative technologies and approaches for the delivery of poorly soluble drugs and then managing their application to achieve client success. His scientific expertise includes formulation design and development, solid state characterization of drug substance and product, and computational modeling (predicting shelf-life and pharmacokinetic and bioavailability for oral, devices and parenteral delivery). He earned his PhD in Physical Chemistry from Oregon State University.