3D cell culture has been used by researchers for many years now, with early adoption and now key roles in cancer and stem cell research. Indeed, classical toxicology testing programs have been in place for many decades, and throughout the past 20 years, animal welfare and scientific activities have spurred the development of in vitro testing methods.

Significant growth within the biopharmaceuticals industry is spurring unprecedented innovation in and demand for cell culture products for the purposes of drug discovery and safety testing. While 2D cell cultures have been in laboratory use since the 1950s, the market for 3D cultures, which more accurately model human tissue in vivo without utilizing animal test subjects, has witnessed spectacular growth throughout the past decade.

According to BCC Research, the global 3D cell culture market was valued at just $586 million for 2014. This market is forecast to grow to more than $2.2 billion by 2019, to register a healthy 5-year compound annual growth rate (CAGR) of 30.1%. The biggest increase will come in the area of assay kits, which is forecast to jump to $588 million by 2019. Demand in this area is driven by the fact that assay kits contain all the necessary reagents and specific protocols packaged for laboratory use.

Growth in this industry will be driven by rising R&D spending for many products, such as antibodies and vaccines, soaring biopharmaceutical production, and increasing instances of cancer and liver-related issues. Indeed, these rising rates combined with improved access to consumer healthcare in the US as well as in emerging markets, such as China and India, is expected to spur growth in the 3D cell culture market for the foreseeable future.

3D cell culture has been used for decades, and it has evolved from being messy, laborious, and expensive to much more organized through a broad range of commercial tools. The technology has already enabled groundbreaking knowledge of tissue and cancer behavior.

Positive indicators of future adoption and growth rates, including the beginning signs of delineation of common (not yet best) practices in which specific supplier technologies are mapped to specific applications, offer hope of a coordinated landscape with less market friction than the previous free-for-all applications. This includes 3D continuing to co-exist with 2D in most research application areas. This is partly due to change dynamics, as well as researchers’ perception of value in comparing 3D and 2D results for basic insights.

One area in which 3D has the potential to grow into a significantly bigger role than 2D is in liver research, yet substantial progress is required for the development of key standards and best practices in many aspects.

Assuming there are five phases of the growth curve (ie, innovators, early adopters, early majority, late majority, laggards), it appears that skin is the most mature in the early/late majority phase. Liver is in the early adopter phase in four of the top 15 pharma, with the rest still in the innovator phase. Other applications are believed to be in innovator phase and envision roughly 3 years to move from innovators to early adopters. They will depend on the creation of industry and regulatory standards, as well as new internal company drug development processes.

The level of innovation is expected to remain high. Technology requirements will likely approach the sophistication of the organotypic level, which may create tension with requirements in reproducibility, pricing and throughput. In fact, some expect unit price declines across the application landscape, unlike in organotypic skin applications, which have held level prices for many years.

The volume increases to support the substantial growth envisioned will come from an increasing array of applications.

Cancer research has long used 3D systems, not only for safety, but also for efficacy testing and basic research. Several areas of unmet need will likely lead in the continued growth of the efficacy role, and they may leverage this experience into other therapeutic areas, particularly in precision medicine applications.

3D cancer co-culture models have been developed in both low-throughput and high-throughput formats, but only cancer cells along with one other cell type (eg, fibroblasts) have been incorporated into models suitable in screening new compounds in a high-throughput manner. In the future, industry leaders see the development of 3D tumor panels for various cancer indications. 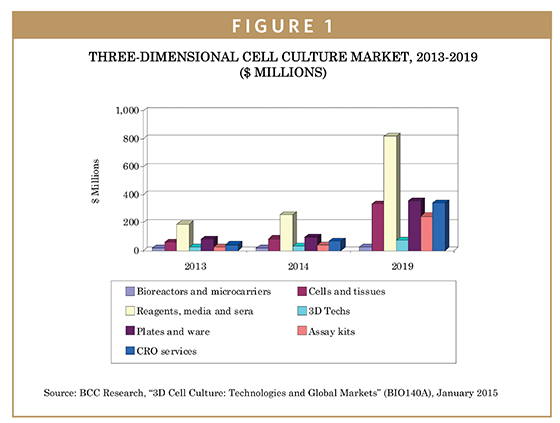 Metastases cannot be examined in animals or in 2D monolayers in which cells grow only on a flat surface. Researchers have therefore only developed a rough understanding of how they form. Tumor cells alter their surface markers to travel throughout the body. The molecules bind them to a particular area of the body. Cancer cells can then spread freely throughout the body via the circulatory system before taking up residence somewhere else by expressing their original surface markers. Now for the first time, 3D lung tissue is making it possible to analyze metastases.

Tumor Recurrence
The capability of 3D cultures to remain viable for longer terms enables the monitoring of tumor recurrence.

Patient-Derived Cells
Personalized medicine based on patient-derived cells has been mostly limited to low-throughput preclinical testing to date. Commercial institutes, such as Oncotest and Champions Oncology have developed 3D assays based on indirect patient-derived samples, which have been expanded through the utilization of mouse xenograft models. 3D culture is envisioned to improve this and play a greater role, but developing standards to enable use in drug-screening programs remains a substantial challenge.

3D cell culture plays an important role in understanding liver function, as well as dysfunction due to toxins or drug-induced liver injury. The benefit of 3D versus 2D in liver is significant, and adoption is anticipated to ramp sharply in the next 3 to 7 years. This is a combination of 3D technology delivering on the unmet need left by 2D technology, together with the increasing possibility for regulatory support to coalesce around a specific role for 3D in drug safety testing for liver toxicity and drug induced liver injury (DILI).

This adoption is most likely in sub-segments, such as so-called slow-release (metabolism of compounds) indications. Substantial progress is required in the development of key standards and best practices in many aspects for this role to be defined and made mandatory.

Integration With –Omics
One exciting possibility is that this strong unmet need in the face of the liver’s extreme complexity will help drive increased integration of various –omics approaches, along with cell culture and analysis. This will require continued innovation by the 3D  community. Lab directors in proteomics have pointed to difficulties with cell extraction from scaffold or gel, as it often ends up being the denatured supernate that is analyzed. Also, many of the biochemical changes currently being investigated occur over very brief time windows, which can easily be missed.

Related technology exists, but it must be further integrated. A single chip can now be used to do thousands of experiments in parallel, thus further leveraging genomic analysis applications. Efforts to translate the chip format to arrays of proteins, however, have largely failed to gain traction in the market. Customers wanting multiplexing capability for proteins have largely adopted the Luminex xMAP technology, which can measure up to 100 different analytes per well. MesoScale Discovery also has some interesting technology in this area. The new paradigm is not only about studying the structure and function of the translated products (ie, proteins) of all the genes encoded in the human genome, but also the million protein-protein interactions, which is known as the interactome.

3D cell culture is expected to play a role in regenerative medicine, initially by helping to test stem cell-derived therapies. This is still largely undefined, but it is envisioned to play out in a manner similar to the testing of biologics during process development. The experiences gained through these biologics research applications will inform and otherwise prepare the 3D field for the therapeutic applications to come later. 3D cell culture has long been used by stem cell researchers, and this trend is expected to continue in research and eventually link to therapeutic applications.

In therapeutic applications, stem cells are derived from either allogenic or autologous models. As an allogenic therapy, one batch of cells is used to treat multiple patients. This approach, which mirrors the traditional pharmaceutical business model, is typically easier to culture, scale up, and automate, and it is likely lower in cost. The disadvantage is the risk of an immune rejection by the patient.

There is significant work ahead in characterizing and testing these processes. The good news is that the requirements for this are in many respects similar to the testing of biologics in development in which 3D is beginning to be applied. This will be an interesting area to watch.

In the development of drugs, the drug product is the focus of characterization and testing. In the development of biologics, the process is essentially the product. From initial clone selection through cell culture and media optimization, scale-up, and manufacturing, the process must be continuously analyzed. Developers must consider the individual adherence characteristics of not only the cell type, but of the particular construction or clone they have selected. They must also consider the properties of a final product, as well as the surface of each culture method employed, including distinctions between methods employed in process development and manufacturing, and between seed expansion and final bioreactor culture.

Thus far, 3D tumor microtissues are being used during biologics development of monoclonal antibodies to study tissue penetration kinetics. Biologics are increasingly being developed for cancer, so this area is envisioned to be a key area to watch.

Researchers are optimistic about the potential for the 3D toolkit of the future to fulfill these requirements, particularly when integrated with -omics.

There is currently little doubt that long-term passage of cells as monolayers can result in the loss of the ability to respond to external signals. This is demonstrated in 3D by cancer cell lines that when returned to a 3D environment, have an incomplete restoration of the original cancer phenotype. Based on research and interviews, BCC Research hypothesizes that developments in 3D cell culture may continue to illuminate important issues with the widespread use of cell lines that have been established and propagated as monolayers. 3D culture will continue to play a key role in characterizing new and existing cell lines.

Against the optimism of these exciting possibilities, critical challenges for 3D cell cultures include assay validation, correlation to historical 2D culture results, analytic techniques such as proteomics, and automation. Basic concerns include poor reproducibility between batches of biomimetic scaffolds and the limited ability to scale a single 3D format up or down. Providing fully validated or robust 3D culture solutions is still not possible, as comparable results from different culture systems continue to elude investigators.

Microfluidic systems are proving to be valuable tools, but many researchers continue using conventional cell culture methods. Innovators see this as mainly due to unmet needs in basic technology, compatible detection and readouts, and the lack of fundamental data to bridge the gap between 2D and 3D.

Stem cells hold great promise, but they also bring tremendous challenges, and 3D is a key part of the potential solution set, as substantiated in Chapter 11. In the mid-1980s, cell and germ cell survival and differentiation were worked out using a 3D substratum. Since then, many other types of stem cells (eg, nerve cells, epithelial cells, endothelial cells) have been successfully cultured using 3D systems. Moving forward, 3D culture stands to significantly improve stem cell viability and function, and thus offer a higher degree of efficiency, consistency, and predictability, which is critical for preclinical  research, and also key for adoption of stem cells in regenerative medicine.

This article is based on the following market analysis report published by BCC Research: 3D Cell Culture: Technologies and Global Markets (BIO140A) by Robert Hunter.

Kevin James Kinsella is a New York City-based healthcare and medical communications professional with more than 15 years of experience in the private and public health sectors.