Since their discovery in 1991, carbon nanotubes (CNTs) were an exciting possibility for the medical research community to overcome barriers in a wide variety of applications including: drug delivery, regenerative medicine, gene therapy, bio-sensors, orthotics, devices, immunotherapy, diagnostics, and material optimization. Yet while CNT research has evolved over the past quarter century, some obstacles still needed to be overcome for widespread medical application. Achieving a scalable technology to make discrete, clean, non-toxic consistent batches of functional carbon nanotubes has been elusive. Previously, no meaningful commercial use for CNTs had been established in the medical field due to these issues.

BioPact, a medical nanotechnology development company based in Cambridge, Massachusetts, has transformed CNTs into a unique composition of matter. This reimagined nanotube is known as Medical Grade Molecular Rebar, or MGMRTM, and it marks a complete departure from the dirty, tangled micron bundles of CNTs that frustrated medical researchers for years. Now, pharmaceutical, biotechnology, and other medical product development programs can utilize the benefits of CNT properties though MGMR; the potential of the carbon nanotube in a practical application. BioPact is developing and partnering MGMR for use in medical applications addressing substantial unmet patient needs.

Less than a micron in length, MGMR is composed of individual, discrete, dispersed, length-controlled, surface-functionalized, multi-walled carbon nanotubes. Utilizing these advanced physical properties has allowed for the development of an exceptional drug delivery system when compared to liposomes, polymeric systems, and antibody drug conjugates.

MGMR carbon nanotubes hold tremendous potential in medicine due to their high aspect ratio: their relatively long length and small diameter means they have an extremely high surface area that allows them to enter cells and potentially cross the blood-brain barrier (BBB). The safety issues that are associated with working with traditional CNTs are no longer a concern with MGMR; no longer limiting the vast potential for advancement in an array of medical applications.

Current manufacturing processes for CNTs leave behind traces of heavy and sometimes toxic metals, such as cadmium, lead, and alumina, which can leach out. This manufacturing process also frequently resulted in a “knotted amorphous mass” of tubes, ranging from a few microns to tens of microns long, that have lost their needle-like shape, and are associated with asbestos-like carcinogenicity problems seen in animal studies. MGMR can be produced economically, free of all metal impurities, and in discrete, ready-to-use form (Figure 1).

Large or small molecules (eg, proteins, peptides, antibodies) can be either covalently or non-covalently bonded to the exterior of MGMR (Figure 2). Successful research performed to date demonstrating loading and bonding of multiple substances to MGMR includes: 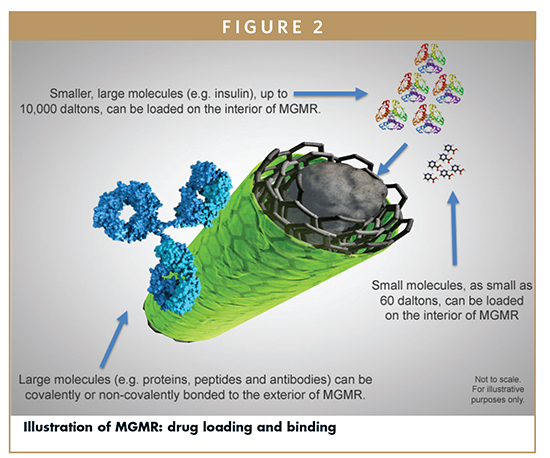 -Loaded insulin, chlorambucil, and bortezomib to the inside of MGMR.
-An enzyme and large molecule, horseradish peroxidase (HRP), was attached to the outer surface of MGMR both covalently and non-covalently. HRP remained strongly bound and retained function.
-Undecapeptide, QSYQAKANNYC, was attached to MGMR and labeled with tetramethyl rhodamine iodoacetamide. This peptide labeled MGMR was readily taken up by a variety of cell lines with no observed cytotoxicity. Many anti-angiogenic peptides are of similar length.
-Alendronate and Cy5 dye were covalently attached to the surface of MGMR using a standard bifunctional cross-linker. Fluorescence was observed, and bone targeting was successful. Both small molecules retained their function.
-Simultaneously loaded small dextran polymers and small molecule dyes into MGMR. The addition of the dextran polymer caused the release of the dye to occur over a longer period of time, demonstrating that both molecules were loaded into the interior of the MGMR and resulted in a method for controlled and sustained release.

Animal studies have shown that MGMR is safe and free from side effects in multiple doses. Six doses of MGMR were injected over 18 days, all mice survived for the duration of study. No toxicity, no accumulation in organs, and extended circulation in blood was observed. The control group dosed with another “medical-grade” CNT proved cytotoxic after just one dose. Maximum tolerated dosing research is currently underway.

Preliminary studies on MGMR show no accumulation in lung, lymph, brain, and heart (Figure 3). Mouse lung from MGMR study (left) demonstrating no residual accumulation versus hyperspectral image of blood (right), where MGMR is seen as white and is evenly dispersed.

MGMR has demonstrated intracellular penetration within minutes. MGMR distributes within the cell and naturally localizes in the nucleus, nucleoli, and the actin cytoskeleton (Figure 4). 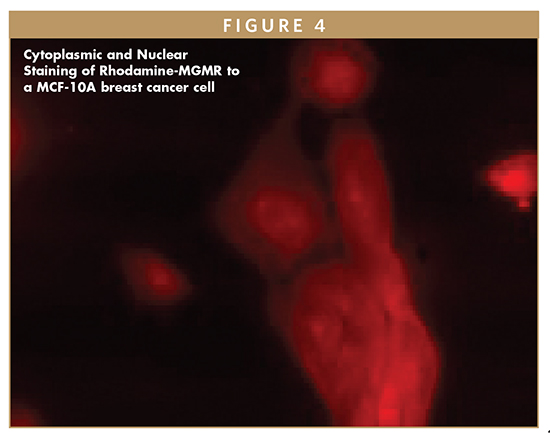 MGMR was fully dispersed and polymerized into an ultrathin (1 to 5 microns) polymer-sheet, then coated onto a membrane support. Holes cut in the membrane support allow for the visualization of the ultrathin transparent membrane loaded with fully dispersed MGMR. Free MGMR (not loaded) and MGMR filled with drug in ultrathin film have been dispersed. In three transdermal patch studies, no irritation, contact sensitization, cell lysis, or cytotoxicity was observed. 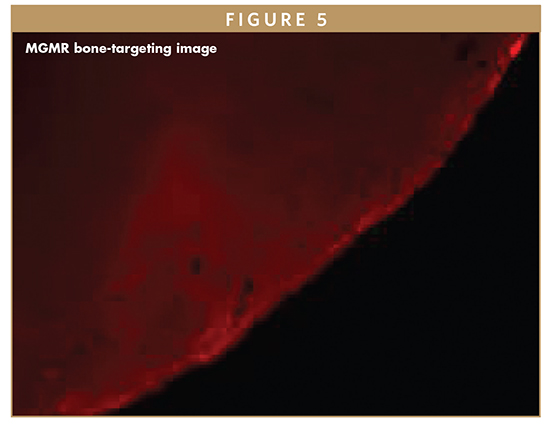 Research using traditional CNTs in Alzheimer disease, Parkinson’s disease, and numerous cancers demonstrates the future of engineering nanoparticles for drug and gene delivery to cells and tissues. With the introduction of MGMR, we can now apply this technology safely and more effectively to enable research in developing new drug delivery mechanisms. The following are a few examples.

Pancreatic Cancer – CNTs engineered as a nano-carrier for siRNA and drug delivery into pancreatic cancer cells.1

Breast Cancer – CNTs conjugated with paclitaxel (PTX) is expected to produce ten-fold higher PTX uptake by tumor.5 See ablation procedure referenced previously, which also has application in the treatment of breast (and other) tumors.6

Colon Cancer – CNTs may be triple functionalized with an anticancer drug (eg, doxorubicin), a monoclonal antibody, and a fluorescent marker to enhance uptake of doxorubicin by the colon adenocarcinoma cell.7

Liver Cancer – Dendrimer-modified CNTs may be engineered for the efficient delivery of antisense c-myc oligonucleotide (as ODN) into liver cancer cells, for maximal transfection efficiencies and inhibition effects on tumor cells.8

Lymph Node Metastasis – CNTs can be decorated with metallic particles, loaded with drug (eg, gemcitabine), and pass through a magnetic field for superior inhibition of lymph node metastasis and pancreatic cancer tumors.9

Prostate Cancer – CNTs conjugated with siRNA and a peptide, combined with the photothermal ablation therapy referenced previously can significantly enhance antitumor activity without causing toxicity to other organs.10

Crossing the BBB – CNTs can carry drug payloads across the blood brain barrier. Research has proven this based upon the drug crossing the barrier solely dependent on the physicochemical properties of CNTs, independent of the drug loaded inside.11 MGMR shares these properties with the tested CNTs, while differentiating itself with safety data. Ritonavir (large molecule HIV drug) has been successfully transported across the BBB using TAT peptide – conjugated nanoparticles (many times the diameter of MGMR’s 10- to 15-nm diameter) and delivered an 800-fold higher level of the drug in the brain when compared to free drug uptake.11 Nanoparticles averaging 150 to 200 nm in diameter (MGMR averages only 10 to 15 nm) conjugated with SynB peptide have been shown to be membrane-penetrable, cross the BBB, and deliver a drug to its target site in the brain.12

Alzheimer’s Disease – CNTs may be safely used to deliver and control the dose of acetylcholine into the brain for treatment of Alzheimer’s disease (in this study transport to the brain was via the olfactory nerve axons rather than across the BBB).13 Uptake of Rivastigmine (used to treat dementia associated with Alzheimer’s and Parkinson’s disease) by the brain when transported by nanoparticles many times the diameter of MGMR (PnBCA) was almost 4x greater when compared to the free drug.14,15

Parkinson’s Disease – Limited delivery of CNS of drugs, like L-Dopa (Levodopa), due to the BBB can be remedied by packing drug into CNTs, which can transport the drug across the BBB.16 CNTs can evade the traditional degradation lines and target specific central nervous system structures which reduces systemic side effects.16

Medical Grade Molecular Rebar (MGMR) has the potential to make an impact on future research in a wide variety of applications, including but not limited to, autoimmune therapy, gene therapy, surgical implants, cancer therapies, CNS therapy and regenerative medicine. The potential to apply this technology to applications to develop a new product, resurrect a struggling development program, or to improve and extend the patented life of an existing product is available. Drug developers can resolve challenges in controlled release, targeted delivery, transdermal delivery, toxicity, and instability all with MGMR. Device developers can utilize MGMR’s ability to be scaffolded, put into arrays, and utilize their highly conductive properties. 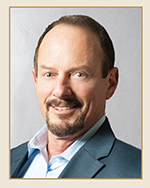 Dr. Joseph S. Dillon is Chief Executive Officer of BioPact and brings over 2 decades of medical industry experience to the BioPact team. He is a seasoned executive with extensive experience in global pharmaceutical and biotechnology business strategy and planning, product development, operations, business development, and strategic transactions. Most recently, he was President & CEO of SynerPhysics, Inc. and President of Dillon Capital Strategies, a strategy and business analytics advisory firm. Prior to that, he held senior positions in pharmaceutical management consulting firms, most significantly was as Senior Vice President, Head of Corporate Development Services and Valuations for The Mattson Jack Group (now Kantar Health). Other previous positions include CEO, President, and Director of The Pharmaceutical Development Center, Executive Vice President and CFO of Vail Banks Inc., CFO and Treasurer of Oread Inc., and corporate positions with predecessor companies of Sanofi. He is Past-Chairperson of the Licensing Executive Society Life Sciences Sector. Dr. Dillon earned his PhD in Metaphysics, his MBA in International Finance, and his BA in Finance. 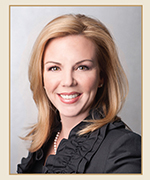 Lainie Mulvanny is the VP of Business Development at BioPact. She is focused on corporate and academic collaborations to develop MGMR-enabled products for medical use. She is responsible for the assessment of unmet needs in the drug delivery space and the development of strategies for BioPact’s partnering-focused development model. Her medical industry experience includes positions at Sanofi-Genzyme, Merck, and Ciba Vison. She earned her BA from California State University, Pomona. She can be reached at lainiem@bio-pact.com.