Enteric capsule drug delivery technology (ECDDT) was developed to provide oral delivery with full enteric protection and rapid release in the upper gastrointestinal (GI) tract without the use of coatings. ECDDT’s intrinsically enteric properties are attained by incorporating pharmaceutically approved enteric polymers in the capsule shell using conventional pin-dipping capsule manufacturing processes. By eliminating the preparation and application steps used for enteric coating, ECDDT can offer accelerated development timelines and reduced program risk. ECDDT can also enable the oral delivery of sensitive molecules, such as nucleotides and peptides, biological products such as vaccines, and live biotherapeutic products (LBPs), which can degrade at the high temperatures or can be sensitive to aqueous coating solution associated with pan and fluid bed coating processes. The enteric properties and rapid release of specialized ECDDT capsule shells have been demonstrated to meet pharmacopeia standards for both in vitro and in vivo performance using esomeprazole magnesium trihydrate (EMT) as a model compound.

Oral delivery is routinely cited as the universally preferred route of administration for drug products. Many oral drugs are specifically formulated to allow disintegration only in certain sections of the GI tract for the purpose of protecting the drug from destruction by gastric acid of the stomach (e.g., proton pump inhibitors), protecting the active from destruction by enzymes of the stomach (e.g., peptides, proteins) or protecting the stomach from an irritant drug (e.g., enteric coated aspirin).1 Enteric protection has historically been imparted to solid dosage forms by applying a seal coat followed by coating at relatively high weight gains (typically ≥ 10%) with pH-sensitive polymer systems using rotary perforated pan coaters or fluidized bed equipment.

The development and scale-up steps associated with enteric coating add complexity, time, and risk to drug programs. An assessment by H2 Pharma Consulting cites the following areas where ECDDT could reduce the complexity of enteric dosage form design and processing:2

-Minimize risk of changes to enteric performance on stability

The assessment further estimated potential savings in overall development time of more than 9 months through Phase III, based on rapid development of prototypes for formulation screening and rapid testing of in vivo performance.

Development risk may also be minimized in several aspects by:

-Limiting the scope of overall process development and validation program

-Minimizing risk of enteric performance changes on scale-up and stability

The major hurdle in oral delivery of many sensitive molecules, such as nucleotides, peptides, live biopharmaceutical products, and vaccines, is protecting the active entity from acidic and enzymatic degradation in the GI tract.3 In some cases, oral delivery can be precluded entirely due to the need for enteric coating. The high temperatures (>40°C) associated with functional coating application and drying can degrade these sensitive actives and, as such, parenteral or other delivery routes are often required. ECDDT can therefore be enabling for oral delivery of such actives by providing full enteric protection and rapid release in the upper GI tract without coating.

The enteric properties of the ECDDT capsules were assessed using esomeprazole magnesium trihydrate (EMT) as the model compound in the form of uncoated pellets. EMT was chosen as a model compound due to both the market relevancy of Nexium® and the high gastric sensitivity of the active. EMT is known to rapidly degrade in acidic media with short-term chemical instability readily identifiable by a yellow/brown discoloration.

ECDDT formulations using EMT were shown compliant with the specifications for both pharmacopeial disintegration and dissolution testing for gastro-resistant dosage forms, as discussed further.

Capsules (n=6) were filled with 20 mg of EMT-layered, uncoated pellets and then evaluated using EP/USP disintegration apparatus type B. The test was performed for 2 hours at acid stage (pH 1.2) without disk and then for 1 hour at buffer stage (pH 6.8) with disk. For comparison purposes, commercially available “acid-resistant” capsules – not designed to be impermeable to fluid ingress in pH 1.2 media – were filled with the same EMT pellets and tested using the same method.

The ECDDT capsules showed no evidence of early disintegration, rupture, or content release, and there was no significant discoloration of the medium after 2 hours in the acid stage (Figure 1). In pH 6.8 buffer, the capsules rapidly disintegrated within 30 minutes in buffer stage. The acid-resistant capsules, however, showed clear evidence of deformation and of content release in the acid stage with rapid yellow/brown discoloration of the medium. 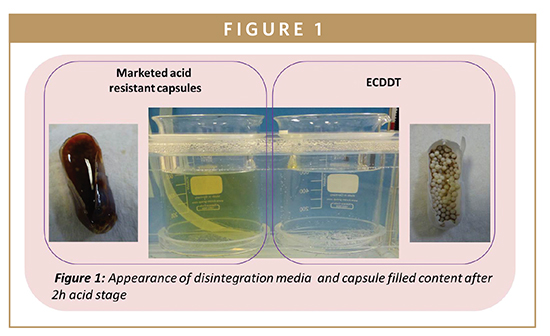 After the acid stage, both capsule samples were cut open to observe the filled contents. The content of commercial acid-resistant capsules consisted of a brown liquid with EMT pellets partially dissolved, demonstrating that a significant amount of acid medium had migrated inside the capsules, resulting in EMT degradation. EMT pellets in ECDDT capsules showed minimal discoloration, indicating little to no degradation.

ECDDT capsules (n=6) filled with EMT pellets were also evaluated according to the EP/USP dissolution test for gastro-resistant dosage forms, using USP apparatus II (paddle). The test was performed at 37°C/100 rpm for 2 hours at acid stage (pH 1.2) and then 1 hour at buffer stage (pH 6.8), with sampling at regular times. The dissolution behavior of Nexium 20-mg delayed-release capsules (n=6) was also evaluated using the same protocol. For the dissolution test, no solubilization of the ECDDT capsules was observed, and each capsule showed less than 0.2% (LOD) of esomeprazole release after 2 hours in the acid stage and more than 90% of release after 30 minutes in the buffer stage.

Esomeprazole is known to show fast oral absorption (plasma peak = 1 to 3.5 hours) and a short half-life (1.5 hours). To evaluate in vivo performance for the new technology, ECDDT capsules were filled with EMT-layered uncoated pellets and compared to Nexium capsules (uncoated gelatin capsules containing enteric coated drug-layered multiparticulates) in a randomized, open-label, single-dose, and crossover pharmacokinetic and gamma-pharmacoscintigraphy study using healthy volunteers under fasting state. Radiolabelled (99mTc) pellets were added in both ECDDT capsules and Nexium hard gelatin capsules size 0 in order to detect the location of capsule opening and content release in the gut through the GI tract. Blood samples were taken at pre-dose and then at regular times post-dose over 12 hours, and anterior and posterior images were acquired at dosing and then post-dose over 12 hours.

In vivo results (Figure 2) showed that no pellets were released from ECDDT capsules in the stomach and that the capsule quickly opened in the small intestine 30 minutes from gastric emptying to the onset of drug release from the pellet dissolution. Nexium capsules, opened and released their content in the stomach before gastric emptying. 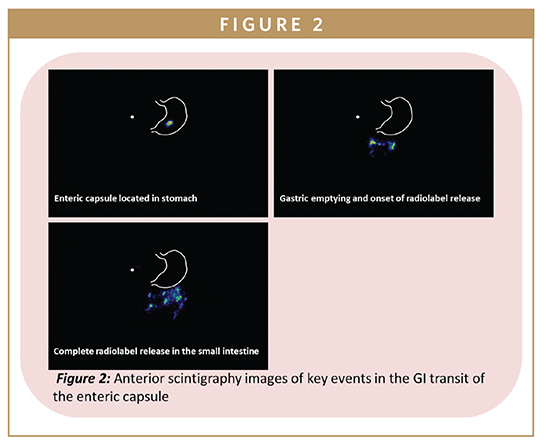 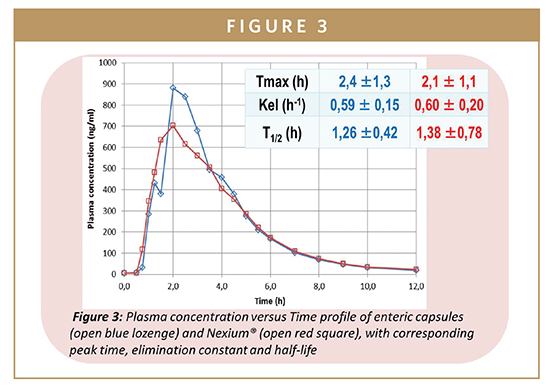 Enteric capsule drug delivery technology utilizes a pharmaceutical-grade cellulosic enteric formulation as an aqueous dispersion to produce capsule shells by conventional capsule manufacturing technology pin-dipping. The enteric properties of capsules have been evaluated in vitro and the results shown to comply with pharmacopeial disintegration and dissolution tests criteria. It has been demonstrated with both in vitro testing and in vivo by human gamma-pharmacoscintigraphy that ECDDT capsules protect EMT from gastric degradation, do not open in the stomach, and provide fast release in the duodenum. 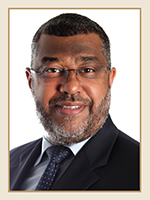 Dr. Hassan Benameur is Senior Director of Pharmaceutical Sciences at Capsugel. He joined Capsugel in 2002 and currently leads the company’s pharmaceutical sciences department. Prior to joining Capsugel, he held various positions in Pharmaceutical Research & Development within Therapeutica, SMB Galephar, and Gattefossé. With more than 20 years of expertise in conventional and advanced drug delivery development, Dr. Benameur brings insightful science into innovative dosage forms and uses drug delivery technology to maximize success and reduce attrition in product development, from preformulation to manufacturing using a systematic and rational approach. Dr. Benameur is a lecturer at several academic and industrial symposia and was presented the Academy of Pharmaceutical Science and Technology, Japan Award in 2005. He is a member of several major scientific associations, including AAPS, APGI BCRG, PSTJ, and CRS and scientific academies. He has also authored 40 scientific publications and the inventor of 20 patents. Dr. Benameur is a Chemical Engineer and earned his PhD in Pharmaceutical Sciences from the Free University of Belgium.