Incorporating a broad range of pharmaceutical- or biologics-loaded fibers into implantable medical devices that could enable next-generation medical applications was previously not feasible because the types of drugs capable of surviving traditional fiber manufacturing processes were historically limited.

Pharmaceutical- and biologics-loaded implantable textiles can result in faster healing and improved patient compliance of medical devices. However, traditional melt extrusion processes used to manufacture fibers destroyed the viability of all but a very limited selection of pharmaceuticals and biologics, given the high temperatures at which melt extrusion must occur – which often exceeds 200ºC and high shear stress during extrusion.

Now, modified wet-extrusion processes can occur at room temperature, eliminating the traditional temperature limitations of pharmaceuticals and biologics that may be incorporated into implantable medical devices and therapies with melt extrusion processes. As a result, the range of drugs now available for controlled sustained delivery from a fiber has been broadly expanded from those previously deliverable via electrospun fibers, microspheres, or nanoparticles.

Using drug protection technology, the biological activity of incorporated agents can now be preserved so that the broadest range of pharmaceuticals and biologics ever possible remain viable when loaded into biodegradable fibers for use in implantable devices that can support controlled sustained delivery.

THE ADVANTAGES OF FIBER DELIVERY

Because fiber is both readily implantable and maintains positional stability, it offers an unparalleled advantage when targeting specific sites within the body. Pharmaceutical-and biologics-loaded fiber has the ability to facilitate an entirely new and groundbreaking approach to a variety of medical applications related to advanced drug delivery, nerve regeneration, and tissue engineering.

The use of biodegradable fiber offers several unique advantages over traditional pharmaceutical delivery formats, including:

Fiber’s cylindrical geometry provides a slower pharmaceutical release rate than a spherical geometry of the same radius, resulting in an inherently longer therapeutic window for similar pharmaceutical concentrations. Also, because fiber is both readily implantable and maintains positional stability, it offers an unparalleled advantage when targeting specific tissue sites, such as solid tumors. Additionally, fiber decreases the risk to patients because fiber is removable in the rare case of an adverse reaction, whereas microspheres and nanoparticles are delivered systemically and typically not extractable once delivered.

THE EMERGENCE OF WET EXTRUSION

Traditional melt-extrusion for medical-grade polymers occurs at temperatures that exceed the temperature tolerance of the vast majority of pharmaceutical and biological therapeutic agents. Now, wet spinning has emerged as a promising alternative to overcome the limitations of melt extrusion. 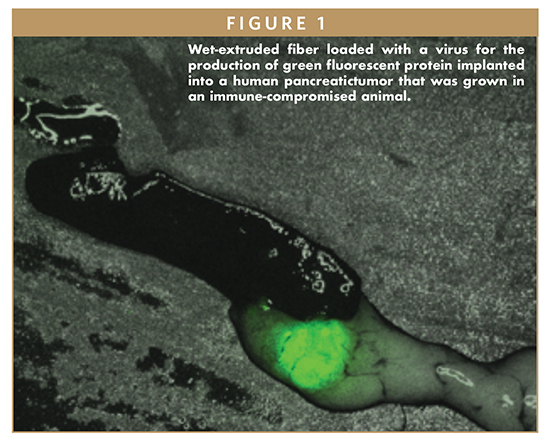 The polymer fiber is then pulled from the coagulation bath and taken through a number of draw stations, where the fiber is stretched to align the polymer chains, resulting in increased tensile strength. While these draw stations typically include ovens to heat the fiber during the pulling process, the temperatures are typically limited to body temperature, allowing the residual solvents (and non-solvents from the coagulating bath) to provide the molecular mobility required to allow the polymer chains to align and provide high mechanical properties to the fiber.

The challenge posed to retained drug viability in traditional wet extrusion is the solvent system that enables fiber formation itself. Exposure to the solvents and non-solvents used during extrusion may destroy incorporated pharmaceuticals or biological agents. However, it is now possible to protect the pharmaceutical from the solvent; enveloping it in a protected zone within the polymer solution thereby protecting the drug from the solvent environment. Prior to use in medical applications, however, the solvents must be removed from the fiber. Several processes can be used to effectively remove residual solvent to levels below the allowable limit set by FDA guidelines while preserving the loaded drug’s viability. Wet fiber extrusion is a very controlled process, yielding more uniform size distribution than the distribution typically found in other formats. Multi-layered, coaxial fibers may be readily produced with each layer containing a unique pharmaceutical and polymer combination, thus enabling tailored release kinetics for multiple pharmaceuticals in a single fiber.

By employing a patented extrusion process based on the fundamentals of wet spinning, a broad range of polymers may be loaded with viable drugs including both synthetic and biopolymers. Wet-extruded fibers are ideal for use in current and next-generation implantable medical devices, regenerative medicine, and as pharmaceutical depots for slow controlled release. The localized pharmaceutical delivery capability of these fibers enables medical device designers to orchestrate the body’s response to the device. Depending on the choice of drug, it is possible to mitigate unwanted reactions and promote desired responses.

THE NEXT GENERATION OF MEDICAL APPLICATIONS

Allowing sensitive pharmaceuticals and biologics to remain viable when loaded into fibers enables the development of drug delivery devices with tailored release kinetics and retained activity. These fibers are ideal for incorporation into any number of implantable medical device applications that benefit from the controlled release of pharmaceutical and biological agents within the body directly to the internal sites where they are needed.

This technology has the potential to revolutionize many medial applications, including spinal cord repair, nerve regeneration, tumor remediation, dermal wound healing, and many more applications. Imagine the possibilities of medical textiles becoming scaffolding for tissue engineering and regenerative medicine applications. The scaffolding would then deliver growth factors that can selectively direct cell migration and tissue growth according to proper placement of fibers loaded with growth factors within the scaffold.

The controlled release and specific drug-eluting capabilities of wet extruded fiber-based systems are well-suited for a variety of medical applications, including meshes and weaves for current textile applications, sutures, ligatures, and scaffolding. In fact, the fibers are sufficiently strong for use as a biodegradable, self-expanding, pharmaceutical-loaded cardiovascular stent.

Beyond the many uses in implantable medical devices and pharmaceutical depots, drug delivery via biodegradable fibers is poised to enable paradigm-shifting advancement in tissue engineering and regenerative medicine applications.

With wet extrusion, sensitive growth factors, such as Nerve Growth Factor (NGF), Vascular Endothelial Growth Factor (VEGF), and other sensitive biological molecules, including immune proteins and enzymes, such as IgG and even live adenoviruses, can be loaded and delivered via fibers.

Fibers loaded with such biologics and incorporated into implantable medical devices are ideal for a number of regenerative applications, including:

Fiber is mechanically strong enough to be woven, knitted, or braided to create physiologically meaningful three-dimensional structures that can support tissue scaffolding. For example, a fiber running through a scaffold releasing VEGF may induce angiogenesis along its pathway, while another fiber in that same scaffold releases NGF to direct the growth of nerve tissue along another specific pathway as defined by that fiber. This pharmaceutical delivery technology also enables fibers with controlled pharmaceutical concentration gradients along the length of the fiber to encourage cell migration. These three-dimensional structures make possible the creation of physiologically meaningful architectures through site-specific pharmaceutical release.

In animal experiments, fiber has been shown, for example, to promote peripheral nerve regeneration. A parallel array of fibers provides excellent scaffolding for guiding neurons and fiber loaded with biologically active neurotrophic factors has been shown to attract neurons from isolated DRG cells in cell culture experiments.

The central nervous system (CNS) is biologically very different from the peripheral nervous system (PNS), especially in terms of wound healing. In the CNS, unlike the (PNS), there is limited regenerative capacity. Research indicates that the axons do attempt to regenerate following injury; however, there are many roadblocks that impede functional recovery. For example, in the myelin (a substance that wraps around many axons to speed up electrical signal conduction) there are substances that inhibit the growth of the axons. When the PNS is injured, the myelin is rapidly degraded by white blood cells and Schwann cells (the type of cells that make myelin in the PNS). In CNS injury, however, both the white blood cells and the oligodendrocytes (the cells that make myelin in the CNS) are much less effective at clearing the myelin rendering less effective removal of inhibitory substances. In the PNS, Schwann cells produce large amounts of neurotrophic factors, which is a beckoning call to the regenerating axons to induce and guide their growth. The oligodendrocytes (CNS counterpart), however, produce much less of these factors. Also, in the CNS, the glial cells (supportive cells in the CNS) form “scar” tissue very rapidly following injury, called a glial scar, which consists of growth inhibitory substances. This glial scar is highly effective at stopping the axons from bridging even very small gaps.

Now that roadblocks to healing are better understood, by delivering sensitive growth factors directly to the injury site, nerve regeneration can be promoted without requiring tissue to be harvested from elsewhere in the patient’s body for grafting. This could potentially advance the treatment and recovery of patients with previously irreversible spinal cord injuries resulting in paralysis.

The growth factor-loaded fiber could enable the creation of three-dimensional concentration gradients of neurotrophic factors that are positionally stable over time, and these gradient scaffolds may be surgically implanted into an injured spinal cord. The concentration gradients of the various neurotrophic factors may selectively entice motor and sensory axons to cross a gap in opposite directions in the spinal cord by directing axonal growth.

This approach could possibly be indicated in spinal cord injury patients, where the spinal cord injury resulted in a lesion, or was severed. This treatment may even apply to old injuries as well, in which case the number of potential recipients increases significantly, as some 250,000 people in the US are currently completely disabled due to a previous spinal cord injury.

Small-diameter vascular grafts for use in the treatment of cardiovascular disease have proven challenging to develop due to the need to induce successful endothelialization and, consequently, to prevent the unwanted formation of blood clots resulting from graft implantation. While blood clots present limited clinical harm in large vessels, in small diameter arteries, the risk to the patient from clotting is considerably greater.

Grafts constructed of drug-eluting fiber may hold the key to enabling small diameter grafts to finally become a viable option for treating cardiovascular disease. By loading medical textiles with the right choice of growth factors for incorporation in the small diameter graft, complete endothelial coverage may be achievable to prevent the likelihood of blood clot formation in the artery.

Wet-extruded fiber with drug protection technology eliminates the traditional limitations of pharmaceuticals and biologics that may be incorporated into implantable medical devices with melt extrusion and provides additional benefits compared to other technologies such as electrospun fibers, microspheres, or nanoparticles. These extrusion processes that occur at room temperature enable loading of the widest range of pharmaceutical and biological agents ever possible for delivery from biodegradable implantable devices, thereby enabling localized, controlled delivery within the body, which can facilitate breakthroughs in medical applications, such as nerve generation, spinal cord injury repair, tissue engineering, and even vascular grafts. 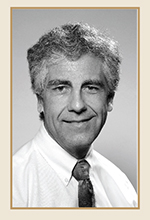 Dr. Kevin Nelson earned his PhD from The University of Texas Southwestern Medical Center at Dallas under the direction of Dr. Robert Eberhart. As a faculty member in Biomedical Engineering at the University of Texas at Arlington in 1996, he joined a team working on an NIH grant to develop a fiber-based, biodegradable vascular stent with the goal of delivering gene therapy to the vessel wall. Simultaneously working with Dr. Nathan Schwade to develop drug-loaded microspheres for improved wound healing, he eventually combined the drug-loading techniques of microspheres with the fiber for the biodegradable stent, and fiber-based drug delivery was born. Eventually patented, this technology has been the focus of Dr. Nelson’s professional life and the driver behind TissueGen, Inc.