Diffusion processes of new and innovative products and services have been studied extensively for nearly 45 years, although most of the research has focused on consumer markets. It seems reasonable that we might learn from others’ experiences and observations, and the frameworks they’ve developed to model diffusion of solubilization technologies. Guiding drugs with poor bioavailability through the labyrinth of discovery, development, and clinical trials into the market is challenging enough, so borrowing any insights that might help us navigate, interpret, or even predict change might simplify our task, or at least give us a glimpse of what to expect moving forward.

The last article in this series on innovation diffusion (Drug Development & Delivery, April 2014) discussed some of the barriers to change, including the concept of “lock-in” developed by Arthur in the late 1980s.1 The famed economist observed that in spite of cost or performance advantages of superior technological solutions, decision-makers can be strongly influenced by the dominance of a technology or methodology. However, other influencers (market shifts, regulatory bodies, and incremental or disruptive innovations) can come into play to overcome the momentum of the status quo, and can have significant impact over the rate of change.

Taking an example from the automobile industry, some of us remember when seatbelts were optional (or non-existent), and for many, “buckling up for safety” was even annoying. From the 1930s founding of the Automobile Safety League of America, and the creation of the National Transportation Safety Board 37 years later, regulatory bodies guided by lobbyists and the public imposed rules and regulations that have redirected the trajectory of automobile and road design. Since the early 1960s, regulations have significantly impacted safety features of cars and how highways are built, in spite of the predominant opinion in the 1970s that auto accidents were primarily attributable to “crazy drivers.” Difficult as it may be to objectively assess or quantify driver behavior and its contribution to accidents, throughout the past 40 years, automobile-related fatalities (rate per vehicles registered and vehicle distance travelled) have steadily declined.2

THE RATE OF INNOVATION ADOPTION

In addition to today’s preponderance of insoluble molecules, other ecosystem interactions and dynamics can serve as catalysts to alter the path of the acceptance and utilization of solubilization technologies. In Everett M. Rogers book, Diffusion of Innovations, he proposes categories of variables that determine the rate of adoption of an innovation.3 Borrowing from his work, I’d like to propose an abbreviated version in terms of variable categories (three vs. his five), and alter them to apply more directly to our industry and more specifically to adoption of solubilization technology. The three main variable categories: 1) types of decision-making entities; 2) perceived attributes of innovation; and 3) communication channels (Figure 1). While these categories are highly interdependent, it’s useful to note them in isolation and then explore the momentum they have created collectively that is driving progress in solubilization of challenging molecules. 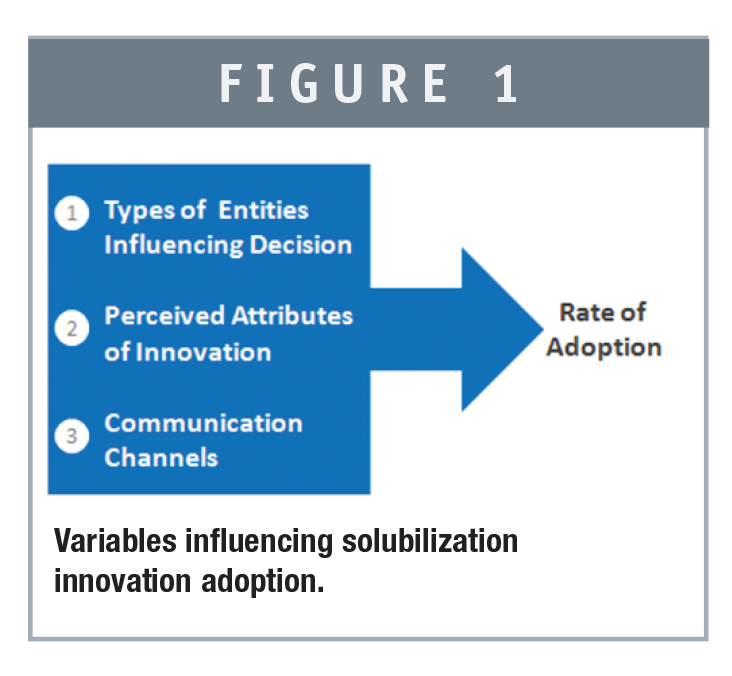 The first category is of course an essential and extremely influential one in our industry, consisting of the FDA and other federal and state agencies that regulate pharmaceutical companies along with numerous industry associations, key industry players, the public, and lobbyists. These key influencers of course include the American Association of Pharmaceutical Scientists (AAPS), the International Society for Pharmaceutical Engineering (ISPE), and the Pharmaceutical Researchers and Manufacturers of America (PhRMA). The boundary conditions these entities create (rules, guidelines, and recommendations) have significant impact on the success from formulation development through manufacturing of all drug products. A specific example of this type of influence in the solubilization of drugs is the adoption of the Biopharmaceutics Classification System (BCS). This framework and subsequent waivers for in vivo bioequivalence (BE) testing that reference it are providing access to cost efficiencies in utilizing various solubilization technologies and excipients to address insoluble and impermeable molecules.4 Quality by Design (QbD), while not specifically addressing solubilization, is another example of boundary conditions that add discipline to achieve right-first-time results and can be leveraged for bioavailability efforts.

The second category, perceived attributes, can contain benefits or advantages that accrue based on the entities that influence the desirability, economic barriers, or acceptance, as previously noted. The main variables considered in this category are: advantages (time, cost, efficacy); familiarity (or compatibility with existing processes); accessibility or doability; and the ability to test and validate.

With respect to familiarity and doability, some of today’s solubilization techniques have been in existence for over a century. For example, micronization has its earliest roots as manual mortar and pestle, dating back to 35,000 BC, and finding early use in drug processing with the Wedgwood system in 1779. Micronization as we view it today for improving bioavailability started appearing as a pharmaceutical manufacturing process in the late 1960s.5 Spray-drying first emerged as an industrial process in the late 19th century, and the concept of solid dispersion as a method to increase the dissolution and oral absorption of poorly water-soluble drugs was proposed in 1961.6 By 1983, the two technologies were merged, and first detailed accounts of spray-drying amorphous solid dispersions for solubilization enhancement were published.7

I hypothesize that the fact that these techniques were familiar and in use by other industries has contributed to the perception of achievability. In addition, the fact that the technologies could be readily tested and validated with observable improvements was critical to the early success. But perhaps the strongest driver in considering and then adopting solubilization platforms – and the perceived attribute of the potential benefits that they can accrue – has been the information that has been proliferated through the industry’s communication channels.

The importance of peer-to-peer conversations in the spread and adoption of innovation may be one of the most crucial in scientific endeavors, and from our data analysis, it appears to apply solubilization technology adoption as well.9 The dispersion of knowledge itself serves as a form of infrastructure required to build a network supporting the acceptance of emerging platforms. To analyze and perhaps even predict the proliferation of solubilization technologies, we have conducted a study of the literature (articles and citations) for lipid, micronization, and solid dispersion platforms. We acknowledge that other technologies exist to address poorly soluble molecules, but for this study and the sake of expediency, we limited our analysis to these three.

Our analysis indicates that solubilization technologies, in particular lipid and dispersion platforms, are in a rapid growth stage (Figure 2, a plot of the literature and citations for three technologies).10 Another study Agere performed and presented on the number of approved solubilized drugs (Drug Development & Delivery, March 2014) reflected a similar trend, with lipids and solid dispersion technologies combined accounting for nearly 80% of all such drugs since 1980.

Both analyses reveal noticeable interruptions to a smooth curve when plotting the data. To begin to interpret these “bumps,” we again borrow from theories of diffusion of technology and new product growth models that have typically been used to describe, interpret, and predict behavior in consumer markets and industries other than pharmaceuticals. 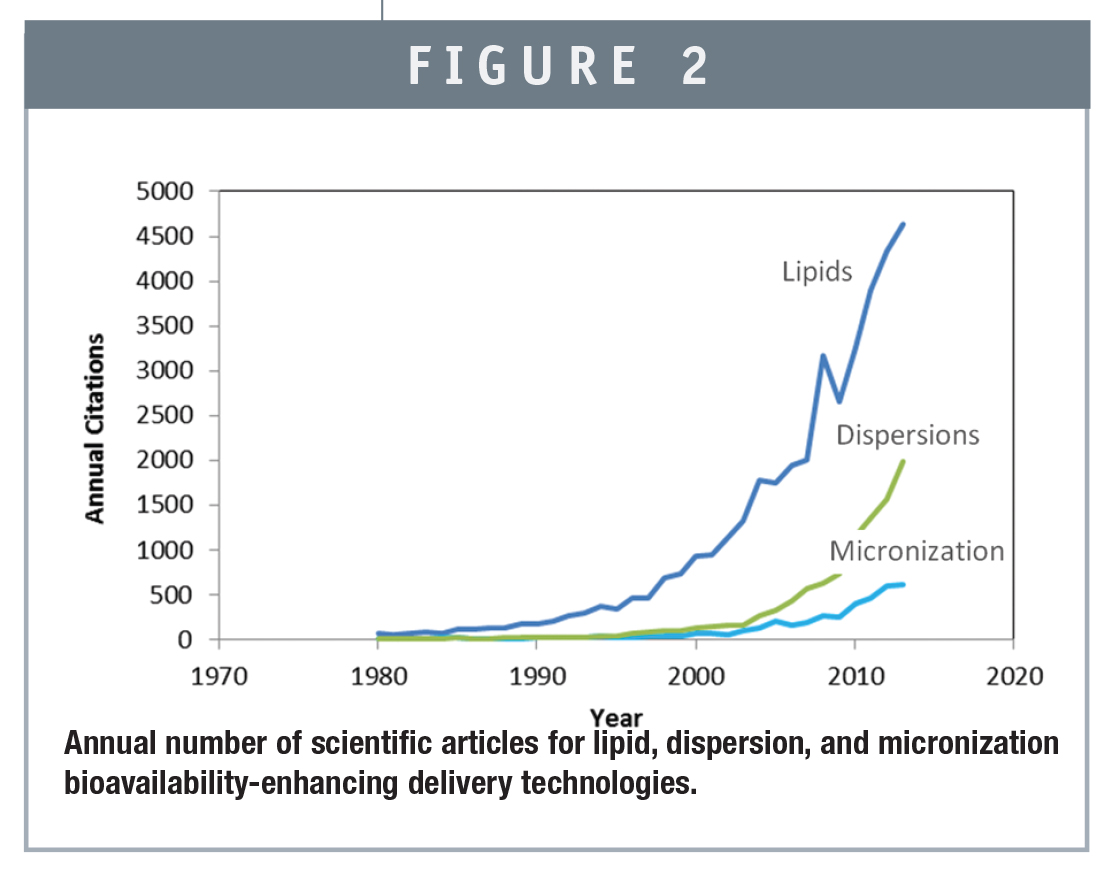 In April’s column, the classic Bass framework developed in 1969 was presented, along with the types of change agents responsible for the path of diffusion of innovation developed by Rogers in 2003.11,12 The catalysts influencing those who drive the acceptance and adoption of new methods of behavior (the entities, perceived advantages of change, and methods by which information is propagated) have been proposed in this article. When researching data on literature, patents, and finally adoption of solubilization technologies as evidenced by FDA-approved drugs enhanced for improved bioavailability, smooth curves indicating a trend toward a symmetric bell curve of a Gaussian distribution are not at first obvious. And this isn’t surprising, especially given that our segment of the industry (relatively speaking) is still at the pioneering stage with only around 6% of all NMEs approved since 1970 utilizing solubilization technology.13-18 Borrowing from the experience and extensive analyses that have been undertaken in other industries, we can expect a somewhat bumpy path toward maturity of today’s technologies, along with an emergence of new innovations offering viable and competitive alternatives.

The classic smooth innovation adoption curve doesn’t capture what researchers in the field of marketing have referred to as “takeoffs” or points at which a steep climb in utilization is observed and “saddles,” where there may be a significant and brief drop-off before innovation diffusion resumes its climb. Figure 3 borrows from work done between the late 1990s through 2002 that defined, described, and analyzed turning points in product lifecycles.19,20 We believe it could be useful to borrow this framework to explain turning points in the diffusion and adoption of solubilization technologies. 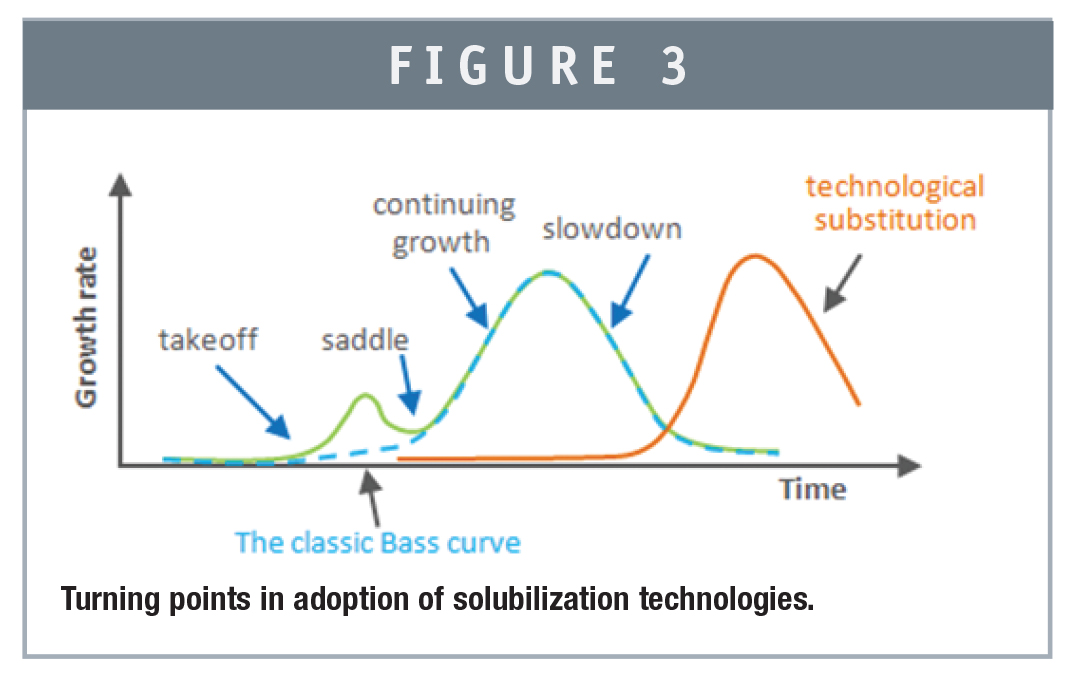 With respect to literature related to lipid technology, the take-off stage appears to have occurred lipid in the mid-1990s, with a saddle around 2010; during those same periods, FDA approvals of drugs using lipid technologies also climbed between the mid-1990s through the mid-2000s, with a leveling since 2010. Solid dispersions’ literature experienced a take-off in the early 2000s, and hasn’t experienced a saddle. FDA approvals is yet tracking with an apparent take-off around 2005 and continuing through 2013, based on available data.

Simple correlations can be thought-provoking. But much more analysis to understand better what the key catalysts are is underway. In the solid dispersions space, for example, the groundbreaking work of Chiou and Riegelman in 1971 surely was a foundation for the take-off in literature that was in this field nearly 30 years later.21 Can we quantify the impact (if any) the introduction of BCS classification system and biowaivers of BE studies had on the rate of adoption of solubilization technologies? And will the fast-tracking of promising drugs that qualify under The Orphan Drug Act (1983), while not addressing insoluble molecules directly, be a contributor to the diffusion rate of solubilizing platforms?

At a more global level, understanding the role regulatory bodies have had in other markets and industries could enable us to weigh more heavily or to discount lessons learned from the research conducted throughout the past half century on technology adoption. Given the large ecosystem and complexity of the pharmaceutical industry as reflected in the effort and time required to move drugs from development through FDA approval, I welcome any insights you might have as we try to understand the dynamics at play with respect to the diffusion of solubilization innovations. 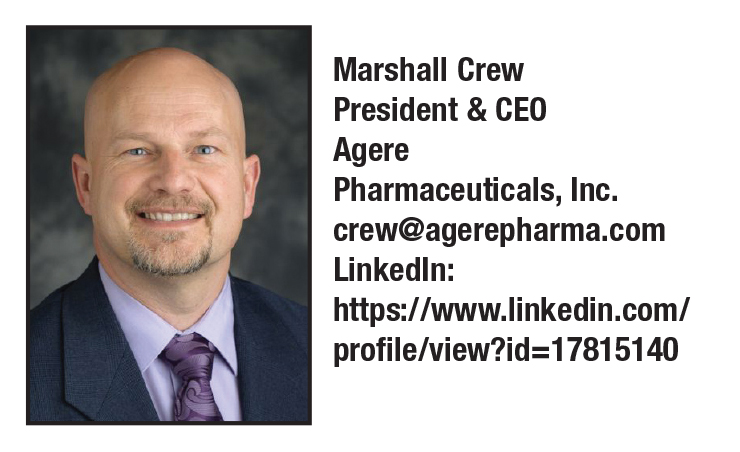