Alzheimer’s disease (AD) is a progressive, neurodegenerative disorder that is the leading cause of dementia in the elderly (60% of dementia cases), affecting 13% to 20% of people over the age of 65. In the US, 5 million people over age 65 are estimated to have Alzheimer’s (65% are women), and 500,000 will die each year, making it the sixth leading cause of death. Estimates show that by 2050, 16 million people over age 65 will develop Alzheimer’s unless medical research can develop better tools to diagnose and treat the disease.

In AD, the synaptic connections between neurons degenerate, and when neurons lose their connections, they cannot function properly and eventually die. As neuronal death spreads through the brain, the brain itself starts shrinking in a process called brain atrophy.

Unfortunately, only a few medications have been approved to help control cognitive loss in AD; however, they do not stop or reverse the underlying disease process. In fact, most new AD candidate drugs are failures. Only one agent has been approved since 2004 (memantine), and the failure rate since 2002 (excluding agents currently in Phase III) is 99.6%.1

The major challenge is that we do not know the etiology of AD – the molecular cascade of changes that underlie AD development. Recent research suggests that neurons die as a result of toxic metabolites that are unable to be removed properly from the brain through the blood vessels.

THE RISE OF MOLECULAR INFORMATION

New technology is urgently needed to comprehensively and rapidly identify the molecules produced by normal and AD-affected brain cells, which may also be present in related biofluids, such as serum and cerebrospinal fluid (CSF). At Protea, this is called Molecular Information – identifying the proteins, metabolites, and lipids that are produced by all living cells. In this way, researchers can profile the molecular networks and the molecular changes that occur, which can distinguish normal brain cell functions from AD biological processes. This new knowledge at the molecular level could then in turn lead to the development of a new generation of AD therapeutics.

Detection of early stages of AD is difficult, thus there is an urgent need to find new biomarkers to predict, diagnose, and monitor AD. Biomarkers are molecular markers that can be used to assess changes within cells that indicate the onset of disease. While AD biomarker discovery is now a major area of academic research, to date, there are no validated biomarkers for AD.

Genomic-based clinical medicine has expanded exponentially since the completion of the Human Genome Project, and scientists have identified several genes that can increase the risk of disease onset. However, the presence of disease-linked genetic abnormalities does not necessarily mean that a person will develop the disease. Investigators worldwide are working to find additional AD-associated genes, and genetic profiling will likely be an important risk assessment tool for future use. For example, many AD drug clinical trials now include genetic testing for APOE4, an AD-associated risk gene.

Mass spectrometry, the gold standard for molecular identifications, is now being used to identify candidate AD biomarkers in CSF and blood. Mass spectrometers are advanced, laboratory-based instruments that are used to identify specific molecules present in biological samples. One goal is to identify and quantify proteins specific to different stages of AD. However, Mass spectrometry currently requires extensive sample preparation prior to analysis, including extractions and chromatographic separations that are time-consuming, costly, and require specialized laboratory skills. Thus, Mass spectrometry, while extremely powerful, is today relatively impractical for routine clinical testing and use in point-of-care environments, such as the OR and physicians’ offices.

Protea has addressed this limitation of Mass Spectrometry by developing a new bioanalytics technology, known as LAESI (Laser Ablation Electrospray Ionization) that enables the rapid and direct analysis and visual depiction of molecules in tissue without the need for sample preparation. The technology works with mass spectrometers to enable large molecular datasets to be generated on biological samples, with results available in minutes. Fully automated, LAESI® has 2D and 3D molecular visualization and bioinformatics capabilities to display large datasets. It is not unusual to identify over 500 molecules in a single LAESI analysis. The molecular databases produced by LAESI aid the “molecular eyesight” of researchers, improving their prospects to find new biomarkers or molecular data that will provide new insight into AD’s onset and progression.

At the June 2014 June meeting of the American Society of Mass Spectrometry (ASMS), a team of scientists from Protea and Waters Corp. (NYSE:WAT) presented the first application of LAESI technology to the molecular analysis of Alzheimer’s brain cells. LAESI was coupled to a mass spec platform known as TWIMS (Traveling Wave Ion Mobility Spectrometry), which allowed additional molecular information to be collected to help identify molecules present in AD-affected brain tissue. Imaging human brain tissue sections by LAESI-TWIMS identified 165 lipids and metabolites mapping to normal or Alzheimer‘s brain tissue. Data analytics revealed that the molecules mapped in Alzheimer‘s brain samples pointed to a significant inflammatory response with lipid modifications compromising the brain tissue, corresponding to some of the latest publications on AD. This data illustrates the capabilities of applying LAESI technology to gain a deeper understanding of significant clinical conditions, particularly in areas where little progress has been made.2 FORMING THE FOUNDATION FOR THE FUTURE OF AD RESEARCH

Protea is also collaborating with Roxana Carare, MD, PhD, at the University of Southampton, UK, a leading AD research laboratory. Dr. Carare is studying the accumulation of amyloid-β (Aβ) and toxic metabolites in the walls of the blood vessels of the brain that are contributing to dementia. It is increasingly recognized that the failure of elimination of amyloid-β (Aβ) with increasing age is a major factor driving this pathway, exacerbated in individuals with the recognized risk factor for dementia, the Apolipoprotein E4 genotype (APOE4). The dramatic failure of the many clinical trials in AD since 2000 has been attributed to complications related to the accumulation of waste products in the walls of blood vessels. Our collaboration with the University of Southampton will apply LAESI molecular imaging technology to attempt to elucidate the aforementioned mechanisms and pathways, along with the combined effects of age, maternal and individual diet, and blood pressure on disease progression, forming a foundation upon which future AD research can be based. Together with the opportunities to monitor progressive changes in vascular function, this new molecular knowledge is expected to enable enhanced risk assessment and diagnosis, evaluation of therapeutic and lifestyle intervention efficacy, and identification of new therapeutic targets. LAESI technology will be applied to mouse and human brain tissues in order to clarify the molecular changes that occur in the brain parenchyma and in the perivascular clearance pathways to identify new therapeutic targets for the treatment of dementias.

The maintenance of cognitive health has a huge impact on the overall health and activity of humans as we age, with substantial social and economic impacts far beyond the individual. With the advent of LAESI technology, a next-generation capability is now available to rapidly and comprehensively provide molecular profiles of normal and AD-affected brain cells and tissues, to elucidate the molecular changes that comprise affected neurons in AD and other forms of dementia, offering the possibility of new, AD stage-specific biomarkers and points of therapeutic intervention for developing new treatments for Alzheimer’s disease. 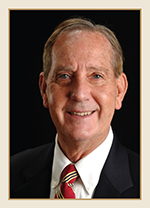 Stephen Turner is Chief Executive Officer and Chairman of the Board at Protea Biosciences Group, Inc., positions he has held since founding the company in July 2001. From 1999 to 2001, he served as President and CEO of Quorum Sciences, Inc. From 1984 to 1997, he was President and CEO of Oncor, Inc. He founded Bethesda Research Laboratories, Inc. in 1975 and served as its Chairman and CEO from 1975 to 1983, at which time, BRL became the molecular biology division of Life Technologies, Inc. Prior to commencing his career in biotechnology, Mr. Turner held the position of Director of Marketing for the Clinical Microbiology Division of Becton, Dickinson & Co. He earned his BA from Stanford University in 1967. In 1994, he was awarded the Ernst & Young Entrepreneur of the Year Award in Life Sciences for the Washington, DC, Region.