In recent years, drug development has been trending toward reducing tablet weight while maintaining similar drug perform­ance to improve patient adherence. Reducing tablet weight is es­pecially prevalent in the formulation of Metformin Hydrochloride extended-release tablets, which are widely used in long-term Type II diabetes treatment. While Metformin Hydrochloride tends to be efficaciously delivered via extended-release tablets, this delivery format usually leads to larger tablets that are difficult to swallow, thereby increasing the risk of reduced patient compliance.1

Patient noncompliance contributes to 50% of all treatment failures and adds billions of dollars to healthcare costs worldwide.2 Smaller, lighter tablets with better drug delivery de­sign have the power to solve this problem and boost patient ad­herence. However, formulating smaller extended-release tablets can be challenging, expensive, and time-consuming. Often, drug developers struggle with controlling the drug release of a smaller tablet at a definite rate. Understanding the challenges associated with developing smaller extended-release tablets, and the excip­ient-based solutions to these challenges, will empower formula­tors to develop robust, stable drug formulations with high patient adherence while cutting manufacturing costs.

While POLYOX™ — an excipient with a granular or spherical morphology — is generally used during high-shear granulation techniques, this study explores the development of POLYOX-based Metformin Hydrochloride extended-release tablet formulation via top-spray granulation to achieve ease of dosing and cost-effective manufacturing. During the study, IFF Pharma Solutions investi­gated the development of metformin hydrochloride extended-re­lease tablets (500 mg) by top-spray granulation processes and the compaction properties of the developed granules.

Various aspects of granulation — such as optimal addition rate of binder solution, impeller and chopper speed, wet-massing time, and milling of dried granules — impact the manufacturing process and should be studied carefully for successful develop­ment.3 High-shear granulation increases manufacturing steps, time, and cost, while top-spray granulation provides the advan­tage of simultaneous granulation and drying in the same equip­ment, making it a great choice for continuous manufacturing.

Pharmaceutical manufacturers should remain aware of some of the potential challenges of the top spray granulation process. Excessive temperature or moisture could cause agglomeration of POLYOX, leading to particles sticking to the fluid bed processor’s (FBP) internal surfaces, includ­ing the base plate. Air blockage may cause uneven temperatures and air distri­bution, which can lead to an agglomera­tion of particles and an unfeasible batch.

In this investigation, low tablet weight POLYOX-based Metformin Hydrochloride extended-release tablets were developed, and the compaction properties of the granules were evaluated.

They are free-flowing hydrophilic powders supplied in a variety of viscosity grades corresponding to approximate mo­lecular weight, ranging from 100,000 to 7,000,000 Daltons; this versatility has made POLYOX a popular choice for many pharmaceutical applications, especially when it comes to managing tablet weight. Typically, used as an excipient in con­trolled-release formulations, POLYOX can also provide a robust matrix-based system when formulating smaller tablet weights and sizes via top-spray granulation.

Development of Metformin Hydrochlo­ride Extended-Release Tablets (500 mg)
To prepare lightweight Metformin Hy­drochloride extended-release tablets for the dissolution study, researchers sifted Metformin Hydrochloride and POLYOX WSR Coagulant through No. 20 mesh and loaded them in GPCG 1.1 top-spray bowl. The blend was granulated using METHO­CEL E5 Premium LV dissolved in purified water. The process parameters for FBP top-spray granulation monitored include product temperature in the range of 30°C to 40°C, spray rate 3 to 7 g/min, and drive speed in the range of 20 to 40 m3/h.

The granules were then blended with lubricant magnesium stearate using a double cone blender (Bowman Archer Ltd), and tablets containing 670 mg of granules were compressed using a circular 12-mm punch on a single rotary compres­sion machine (Kambert Engg. Pvt Ltd). Compressed tablets were then evaluated for physical attributes like hardness and thickness.

For the dissolution of Metformin Hy­drochloride extended-release tablets (500 mg), researchers carried out in vitro stud­ies to optimize the formulation and evalu­ate the performance of the finished product. For dissolution, test, and specifi­cation listed in Metformin Hydrochloride extended-release tablets monograph of USP pharmacopeia was followed.4 The Dissolution condition consists of 900 ml of 6.8 pH phosphate buffer media in USP type I apparatus (basket method) at 100 rpm.

Researchers evaluated the stability performance of the POLYOX-based Met­formin Hydrochloride extended-release tablets (500 mg). Tablets were packed in a triple laminated pouch and charged on stability condition at 40°C/75% RH (stabil­ity chamber by Neutronics equipment company Ltd.). Dissolution was performed at different time intervals (1, 3, and 6 months) and was compared with the initial release data.

Compaction Study
The compaction properties of differ­ent grades of POLYOX and POLYOX-based Metformin Hydrochloride extended-release granules were studied using a compaction simulator (ESH com­paction simulator, UK). The tablet com­pression was carried out with a 13-mm flat, D-type tooling punch, and the physi­cal evaluation of the compressed tablets (viz, hardness, thickness, and diameter) was performed after 24 hours of storage at ambient temperature and controlled hu­midity. Researchers calculated the tensile strength for each tablet from obtained hardness, thickness, and diameter of the tablet, then plotted it against the compres­sion pressure.

Development of Metformin Hydrochlo­ride Extended-Release Tablets (500 mg)
The composition was optimized and screened for the quantity of controlled re­lease polymer (POLYOX WSR Coagulant) to obtain the desired release profile at 3 hours (Table 1).

The dissolution study showed that, as the concentration of the POLYOX WSR Co­agulant increased, the drug release was decreased at 3-hour intervals. F3 formu­lation showed the desired drug release, therefore the same was used for further studies. The top-spray granulation process was satisfactory and did not show any pro­cessing challenges like agglomeration and uneven distribution of the binder. Physical properties observed for the granules (F3) are shown in Table 2.

Flow property data showed the poor flow of the granules. Particle size distribu­tion of the granules (Table 3) suggested in­creased fine proportion as compared to the granular portion. This can be attrib­uted to a higher proportion of the API (Metformin Hydrochloride) present in the composition (~75% w/w). 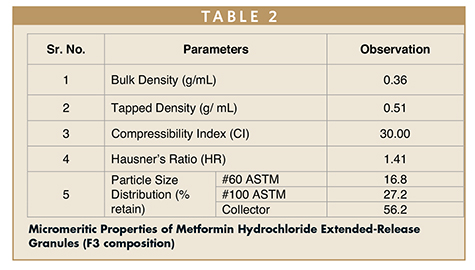 The results reflected white to off-white round tablets with an average weight of 670 mg. The diameter of the tablet was 12 mm, and the thickness was reported to be 6.10 to 6.20 mm. Researchers found the hardness to be about 5 to 6 kP.

Researchers carried out the dissolu­tion study as per Metformin Hydrochloride extended-release tablets monograph in USP. This clearly represents that the proto­type with low-tablet weight complies with USP dissolution specification (3 hours-20% to 40%, 3 hours-45 % to 65% and 10 hours-NLT 85%).

An accelerated stability study (40°C/75% RH) showed consistent disso­lution of the developed formulation over the study period (6 months), proving the stability of Metformin Hydrochloride ex­tended-release tablets. In addition, the packaging material (aluminum pouch) of the drug product during the stability study might have helped to achieve the consis­tent drug release across the stability pe­riod.

Compaction Study
Researchers calculated the tensile strength for each tablet from obtained hardness, thickness, and diameter of the tablet, then plotted it against the compres­sion pressure. The Metformin Hydrochlo­ride extended-release granules were studied for compaction profile (Figure 2). The compaction slope observed for base polymer (POLYOX WSR Coagulant) was 0.036, and for Metformin Hydrochloride extended-release granules, it was 0.051. Data suggests the formed granules had better compactability compared to the base polymer. The change in compactabil­ity can be attributed to the proportion of API (~75% w/w) in the formulation. 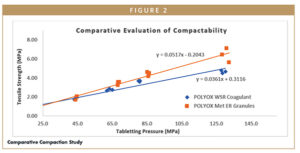 Overall, the study shows the application of POLYOX-based top-spray granulation to manufacturing smaller Metformin Hy­drochloride extended-release tablets. By incorporating top-spray granulation into the manufacturing processes for extended-re­lease tablets and formulating with patient needs in mind, formu­lators will equip the pharmaceutical industry with improved patient compliance and therapy outcomes, while reducing costs and increasing efficiency. 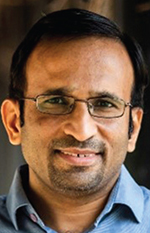 Dr. Atul Lohade is the Senior Application Specialist in Pharma Solution Business at IFF. He earned his PhD (Tech) in Pharmaceutics from the University of Mumbai. His expertise and focus are in solid oral, liquid oral, and topical-based drug delivery technologies. 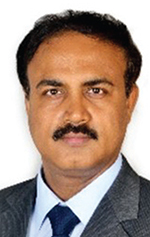 Dr. Tejas Gunjikar is the Pharma Application and Innovation Leader at IFF, focused on drug delivery technologies, biopharmaceutical formulations, solid oral dosage forms, and more. He earned his PhD in Pharmaceutics from University of Mumbai, and his Bachelor’s degree in Pharmacy from Savitribai Phule Pune University. 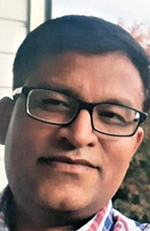