Despite the many obvious clinical advantages – safety and selectivity, leading to superior safety and efficacy – and the increasing number of commercial successes, the full potential of peptide therapeutics has yet to be unleashed. Estimated to exceed $46 billion by the end of 2025, the global therapeutics market has attracted the attention of key players, such as Eli Lilly, Novo Nordisk, Pfizer, Takeda, and Amgen. One of the barriers to both development and production has been the high cost of the current state of the art batch manufacturing processes. A new manufacturing process lowering the cost and speeding up their development whilst allowing for superior quality could give the development of therapeutic peptides even more momentum.

WHAT ARE THERAPEUTIC PEPTIDES?

Therapeutic peptides have a long history. Representing a unique class of compounds positioned between small molecules and proteins. The FDA defines a peptide therapeutic as a chain of 40 or less amino acids (the building blocks of both peptides and proteins) and regulates them as small molecules. Therapeutic peptides are designed by rational methods with high specificity to bind and modulate a protein interaction of interest.

Because of the modular design of peptides, which are naturally built from linking together amino acid residues, through peptide bonds, in an end to end fashion, each amino acid is carrying a unique functionality adding a specific property to the peptide. The different amino acid residues are like Lego blocks and enable the design of highly specific drugs. As a result of their ability to mimic natural pathways, several peptide treatments are essentially “replacement therapies” that add back or supplement peptide hormones in cases where endogenous levels are inadequate or absent. This was evidenced in the 1920s through the isolation and therapeutic use of insulin in people with diabetes. 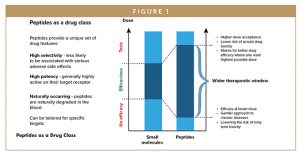 Despite revolutionizing diabetes treatment, and their known benefits, the appetite for the development of therapeutic peptides was tempered by challenges such as short plasma half-life (most peptides have a half-life of around 15 mins, making these peptides unfit as drugs). As such, they took a back seat to monoclonal antibodies in modern drug development in the beginning of the millennium when the industry learned to produce antibodies in mammalian cells. Most of the low-hanging fruits in antibody therapies have now been developed, and the pharma industry is now looking for the next modality to take its place. The tide is therefore now turning, and the industry has renewed its interest in the development of therapeutic peptides recognizing the benefit they can bring to the treatment of a wide range of conditions. Diversifying from its original focus, the genomic era has allowed for the identification and molecular characterization for many endogenous peptide hormones and their receptors, as such, novel peptidic antagonist and agonist for these receptors are being pursued. Furthermore, novel drug delivery approaches (using non-natural amino acids and or conjugation partners) promotes enabling once-daily and once-weekly administration and most recently, technologies enabling oral delivery of large peptides, is seen in late-stage clinical trials.

Now viewed as a promising and a novel approach to treat many diseases, this renewed interest has led to a number of highly successful “blockbuster” peptide drugs (eg, Copaxone, Victoza or Lupron). As of 2018, more than 100 approved peptide therapeutics for various clinical indications were commercially available in the global market. Additionally, a robust clinical pipeline currently has more than 100 type of therapeutics in late-stage clinical development with more than 200 types of therapeutics in preclinical stage.1 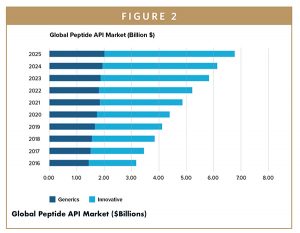 Therapeutic peptides have several important advantages over proteins or antibodies: they are small in size and have the ability to penetrate the cell membranes. They also have high activity, specificity, and affinity; minimal drug-drug interaction; and biological and chemical diversity. An added benefit of using peptides as a treatment is they do not accumulate in specific organs (eg, kidney or liver), which can help to minimize their toxic side effects, a considerable benefit to patients.

In the case of cancer, these peptides can be used in a variety of ways, including carrying cytotoxic drugs, vaccines, hormones, and radionuclides.

Valued at $35.2 billion in 2017, the global peptide market is outpacing the growth of the global drug market by two to three times. Increasing demand for efficient and rapid-acting therapeutics for the treatment of cancer and other lifestyle-associated conditions is motivating market growth.

CHALLENGES OF WORKING WITH PEPTIDES

However, it is not all good news as the benefits of therapeutic peptides do not come without their challenges. Currently, peptides require complex synthetic processes in their manufacture, including plant and labor-intensive production cycles. Scale-up of batch processes from preclinical to development and then to commercial is very expensive and associated with significant risk of failure to supply – Failure of a Phase 1 or 2 batch is typically $2.2 million to $5.5 million, depending on dose and number of subjects plus a delay of approximately 1 year.

In addition, batch production processes lack continuous quality and control, increasing batch-to-batch variability, and the risk of the whole batch being discarded is quite high and very costly. The significant steps required to scale up production has led to significant delays in new drugs reaching the market. Many new developments are halted because of the high costs and poor commercial viability that has been associated with their development.

Continuous processing holds the promise of solving a number of critical drawbacks of the current batch manufacturing of therapeutic peptides. By significantly reducing cycle times and labor costs while providing for higher purity and process quality, this technological advance will drive market growth and spur innovation. The adoption of novel technologies to manufacture efficient drug molecules quickly and with less capital investment is seen as somewhat of a holy grail in this space.

Over and above, the technology could also significantly reduce the cost and environmental impact of harmful waste as well as energy consumption. The current state-of-the-art in peptide synthesis involves primarily legacy technologies, which use large amounts of highly hazardous reagents and solvents – little focus on green chemistry and engineering. This has attracted growing criticism and pressure to find a cleaner approach.

Currently SB3000’s new continuous process has seen a reduction of ~90% in solvent consumption and a similar reduction in the generation of highly toxic waste. In addition to the environmental benefits, the reduction of toxic waste generation also has significant cost benefits. The current cost of toxic waste disposal in the peptide manufacturing industry is estimated at $1 billion to $1.5 billion based on the annual sales of therapeutic peptides ($20 billion+). By 2025, the cost of the toxic waste disposal will have risen to ~$2.5 billion to $3.5 billion.2 This does not even take into account that many of the solvents are “listed,” meaning that their use is regulated and therefore must be significantly reduced or replaced. The μLOT process would significantly reduce this by about 90%.

A NEW APPROACH TO PEPTIDE MANUFACTURING

μLOT is an entirely new approach to the manufacturing of therapeutic peptides, which promises to completely replace traditional large-scale batch manufacturing. The μLOT technology platform provides true continuous manufacturing of peptides, enabling in-line process analytical technologies (PAT) throughout the process, providing an unprecedented level of quality and control and a significant reduction in cost of goods. It is estimated that the upstream issues associated with peptide production represents about 75% of the total production costs.

The μLOT technology platform is a “chemical assembly line” that uses a ribbon made of polymer mesh that has sachet pockets containing a solid-phase resin and moves continuously through all the various chemical stages of manufacture – all manufacturing stages are on-going at the same time. The ribbon is tailored according to the solid-phase resin, sachet size, and the spacing of the sachets to optimize the process. As the ribbon goes through the manufacturing process, there is very close monitoring of every sachet so that high quality can be ensured through every single step in a continuous fashion. This method enables the same equipment to be used from preclinical through to the commercial phase. As a result, there is no delay and no risk associated with manufacturing development during clinical development.

The μLOT technology platform is a predictable and reliable solution that enables the synthesis of peptides that are not currently economical or technically possible to produce. It will also improve the cost and quality of both novel and current blockbuster peptides due to its in-line process analytical technology. It intends to focus on three commercial segments it believes it can offer the most benefits. These include the following:

The high-quality, high-process consistency between manufacturing runs and the in-line PAT analytics of the μLOT platform will enable unprecedented robustness of the manufacturing process, significantly retiring the risk of failure to supply due to non-scalability of the manufacturing process. Furthermore, in case of process mishaps, the ribbon tracking system will allow the μLOT users to identify exactly what part of the ribbon is out of specification and discard this and in this way, rescuing the rest of the production. In contrast to this, a mishap in a batch process will lead to failure of the entire batch. SB3000 has already seen significant interest in its model, and it is anticipated that the first go-to-market contract will be secured in the very near future. 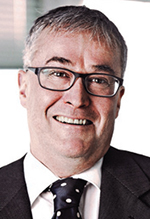 Dr. Jens Bukrinski is Head of R&D at SB3000 and has 20+ years of experience in pharmaceutical development from academia, Novo Nordisk, and Novozymes Biopharma R&D, and as an independent advisor. Having been involved in more than 25 drug development projects and with 5 drugs currently on the market, he has substantial experience in drug development spanning from early stage R&D through clinical development, BLA, and MAA submission and lifecycle management. He earned his MSc in Dairy Science and Technology and his PhD in Structural Biology. After 8 years in academia as post-doc at University of Copenhagen and research associate professor at Carlsberg laboratory studying structure and function of proteins, he moved into the drug development industry. In 2016, he founded CMC assist, providing independent counseling to pharma, biotech, and related industries within CMC development, including regulatory strategy and documentation.