Peyronie’s disease (PD) is a progressive disorder characterized by a tunica albuginea inelastic scar resulting in a variety of penile deformities often coexisting with erectile dysfunction and pain. PD has historically been thought of as a rare, insignificant disease relegating physicians to take an observational approach and to reassure men that the disease can spontaneously resolve over time. However, the truth is that the natural history of PD is often progressive in severity, leading to significant emotional distress and psychological burden.1

Current trends in diagnosis and management in PD are even more disconcerting. Despite clear evidence that oral agents like Vitamin E and potassium para-aminobenzoate are no more effective than placebo, oral therapies are routinely offered as primary treatment.2 Recent literature indicates that multimodal therapy (oral plus intralesional injections and/or iontophoresis plus mechanical stress) could be a promising treatment protocol for PD.3,4 Iontophoresis or electromotive drug administration (EMDA) is the use of an electrical current to drive positively charged medication into the underlying tissue.5 Early in the introduction of EMDA, researchers were optimistic about its use but it has not proved promising as a viable treatment option. Levine’s 2003 study using EMDA was able to detect varying amounts of verapamil in the tunica albuginea, but his 2007 double-blind, placebo controlled study using verapamil and EMDA indicated no statistically significant difference i decreases of curvature.3 Experts in the field recently reviewed the current PD literature and made guideline recommendations on all therapies for PD based on graded, evidence-based criteria. This systematic analysis revealed the strongest level of evidence in support of non-surgical therapy was for intralesional therapy (ILT), specifically interferon (Grade B).6 Despite these recommendations, a minority of men with PD receives ILT. When men receive ILT, it is uncommon that the local urologist performs the treatment; rather, he is referred to a practice focused on surgical treatment of PD.2

For 4 decades, urologists have overlooked a potentially effective manner to infiltrate Peyronie’s lesions with ease. Beginning in 1968, 21 patients were treated with a needleless injector with corticosteroids with 64% having improved curvature.7,8 While steroids have fallen out of conventional PD ILT use, the Madajet® injector is a readily available instrument in the urologists’ armamentarium in the burgeoning area of needleless anesthesia for the no-scalpel/no-needle vasectomy and circumcision.9,10 The Madajet is an FDAapproved device historically used for mass immunizations but now commonly utilized as an anesthetic tool in dentistry, podiatry, dermatology, and recently, urology. Depending on the application, the device ejects the anesthetic under high pressure at a consistent depth of penetration of 2 to 6 mm below epithelium and makes a wheal at the base of injection of 5 to 6mm in diameter.9 The device could provide the urologist with a vital tool for intralesional injections for Peyronie’s using well-studied, established preparations like verapamil, interferon, and collagenase. This study’s aim was to present a proof of concept that the Madajet may be a suitable instrument to inject medication into Peyronie’s plaques. 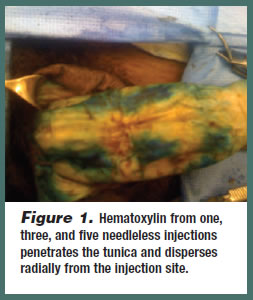 The study design was reviewed by the institution’s Internal Review Board and determined to not fall under the IRB review process, because it did not rise to the level of human subject research under the FDA definitions. Three cadaveric intact male penises were embalmed up to 3 months prior to the study. Each penis was divided into six sections on the left and right side of the midline of the dorsal penis, to be injected into left and right corporal bodies. One, three, and five needleless injections of approximately 0.2 ml of hematoxylin were performed in the left and right side of a formalin fixed cadaveric penis at the distal, mid, and proximal shaft, respectively. 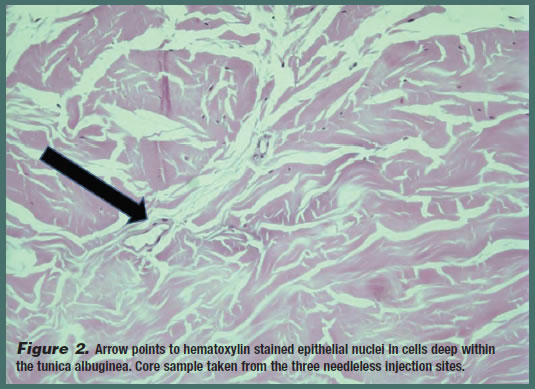 Immediately following the injection of hematoxylin, the penis was degloved exposing the underlying Buck’s fascia and tunica albuginea of both dorsal corporal bodies to the level of the penoscrotal junction ventrally and penile ligament dorsally (Figure 1). Core samples were obtained using a dermal 5-mm circular punch biopsy through the entire tunica albuginea (TA) into the cavernosum over the respective injection sites on each corporal body. Specimens were fixed in formaldehyde and processed by a pathology technician using hematoxylin in the traditional H&E staining method. Hematoxylin stains only nuclei of cells; therefore, the depth of hematoxylin staining was evaluated grossly on core sampling and microscopically by indentifying hematoxylin stained cells in the cross-sectional thickness of the TA (Figure 2). Though collagen staining could have been performed, endothelial cells are present throughout the entire TA; therefore, their staining is a valid demonstration of hematoxylin penetration.

Hematoxylin in all three specimens completely penetrated the skin. Upon gross and microscopic evaluation, the one needleless injection of hematoxylin penetrated greater than 50% of the TA, but the three and five needleless injections penetrated 100% of the TA. The dermal layer had a drug entry point with a 3-mm radius of hematoxylin stain that radiated outwardly to a more diffuse 4-mm circumference on the superficial layer of the TA to a 7-mm circumference on the deep layer when three and five fires were performed. There was minimum uptake by the skin. The neurovascular bundles were not inspected.

Since oral agents for PD have demonstrated minimal to no effectiveness, and surgical therapy is only performed in a minority of patients, a large proportion of men with PD will continue to be undertreated. Since 2007, more compelling clinical trials have shown that ILT has, at least, consistently proven to stabilize the deformity or, at best, reduces the curvature.11-13 It is unclear whether it is the inaccurate belief that PD spontaneously resolves or that nothing can be done to treat the disease that limits the opportunity for men to receive ILT.14 Epidemiological reviews of PD don’t fully explain why only the minority of urologists offer ILT. Lack of adoption could be skepticism of the effectiveness of ILT or reluctance to perform the procedure due to lack of formal training in the technique.15 Patient factors may limit its use too. Many men with PD may not consent to the procedure after the conventional needle technique is described to them or may decline ILT over concerns of the possible increased costs incurred by off label use. An easier and potentially less painful way to administer the medicine has been attempted with topical verapamil therapies, but none have proven definitively that the drug permeates the plaque.16

Intralesional therapy has been used in the treatment of PD for over a half a century with recent evidence-based analysis supporting that ILT has the most robust data for non-surgical treatment.6 Despite potential benefits of ILT, one of the impediments is the negative reaction of most men to the thought of a needle inserted into the penis. The needle injection technique requires an anesthetic penile block followed by a total of seven to eight separate needle “sticks” to administer 10 ml of diluted drug.15 Plaques are often very hard and can be calcified, making it difficult to penetrate the plaque. Drug dispersal into the plaque is accomplished by backing the needle out and pushing the drug into the created needle track. Scores of needle injections over weeks of injections into the tunica plaque raises some theoretical concerns of increasing injury to the dorsal nerves and arteries of the penis.

The results of this case study demonstrate the efficacy of the Madajet in delivering hematoxylin into the TA. The molecular weight of hematoxylin (302 g/mol) is not significantly different than verapamil (455 g/mol) or interferon alpha- 2b (244 g/mol); therefore, the needleless technique may be a viable option for drug dispersal. The limitation of this study is that the mechanism of drug transportation is different in cadaveric than human tissues. Additionally, formalin may alter the resistance of cadaveric tissues allowing solution to pass with less resistance than live TA with plaques. If there is more resistance from live tissue, more than five needleless injections may be needed to penetrate the entire thickness of Peyronie’s plaques. The Madajet can administer a volume of approximately 1.5 ml in seven needleless injections, potentially getting higher concentrations of the drug at lower volumes of solution while encompassing a broader field of the plaque.

The Madajet technique also may offer an advantage over needle injection in terms of drug delivery in cases of PD with extensive fibrosis, plaque formation, and calcification. Conventional injection techniques are limited with extensive calcification, fibrosis, and plaqu formation, requiring higher gauge needles and administering drugs only on exiting the needle tract. The pressure generated by the device far exceeds that what can be obtained with a syringe, and as a result, may provide more effective drug delivery through these challenging plaques. In contrast, needleless technique may not provide the mechanical fracturing of plaques that needles can achieve, indicating that the published success in ILT may be secondary to the physical insertion of needles itself, which lead to traumatic plaque destabilization and clinical improvement.

The Madajet may have another advantage over conventional needles in terms of its safety. The needleless technique potentially could be less likely to traumatize the neurovascular bundle that usually sits on top of the major area that forms plaques. Using the device also poses less risk to the corpus spongiosum with ventrally located plaques, whereas a needle presents the risk of penetrating the corpus spongiosum causing hematuria or urethral trauma.

The Madajet injector operates a spring-loaded piston that generates about 2000 psi in the fluid chamber and disperses the approximately 0.2 ml of solution radially into the tunica albuginea, creating shear forces into the target tissue. The mechanical/physical forces delivered by the Madajet have a promising therapeutic advantage over conventional needle injection treatment in that the high forces produced by the quick bursts of fluid potentially creates plaque distention and disruption of the abnormal aligned collagen fibers. A mechanical/physical approach to treating Peyronie’s is not a new paradigm; ESWL, counter flexion of the penis after ILT, and traction devices are at the forefront of PD management. Further molecular rationale for a “pugilistic” approach is supported by studies of Duptyren’s contracture, PD’s genetic and analogous counterpart, which demonstrated upregulation of “antifibrotic” genes by applying stressors to the abnormal collagen.17

Urologists and their patients with PD anticipate the possible FDA approval of histoplasmiticum collagenase if Phase III trials demonstrate its effectiveness. If approved, it will be the only drug of its class approved for PD, creating a high demand for its use. Nevertheless, many men may still defer treatment because of the aversion to needles. The Madajet technique has the capability of addressing the shortcomings of the ILT needle technique by making the needleless ILT therapy a simple and relatively painless mode of drug delivery.18 With its benefits and ease of use, a higher percentage of urologists would offer ILT in their practice.

The Madajet needleless injector penetrated cadaveric penile skin and infiltrate the entire tunica albuginea in less than 1.0 ml of solution. The relative ease of applying a less invasive needleless technique to men with PD may not only increase the number of men receiving ILT over those receiving less effective therapies but also provide an easier method than conventional needle techniques. Further study of needleless techniques in vivo is required to compare with traditional needle techniques with regard to its efficacy, drug dispersion properties, and physical structural effects to the plaque architecture. 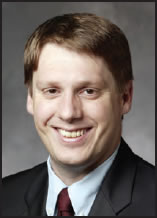 Dr. Marotte is a urologist in private practice in Arkansas and is a Clinical Adjunct Instructor at the University of Arkansas for Medical Sciences in the Department of Urology. In 2005 he completed his urologic residency at Stanford University after publishing a number of manuscripts in urology pertaining to urologic oncology and pediatric urology. Currently, he is a fellow of the American College of Surgeons, President of the Arkansas Urologic Society, and Representative to the SouthCentral Section of the American Urologic Society. Aside from his busy clinical practice, Dr. Marotte is focused on innovative urological surgical techniques and urological devices and holds a patent pending in a new urological device. He also is interested in novel drug delivery systems with urologic applications and is the lead scientist in a study evaluating testosterone replacement therapy with Bioject, Inc.