Apolipoprotein C-III (apoC-III) is a key modulator of plasma triglyceride (TG) levels. It has been shown that loss of function mutations in apoC-III are associated with lower TG levels and a reduction in cardiovascular risk while elevated TG levels are associated with increased risk of both cardiovascular events and pancreatitis. In recent years, there has been an effort to develop strategies to reduce levels of apoC-III in order to reduce elevated triglyceride levels. Based on this background, our team led a pivotal study in patients with severe hypertriglyceridemia, defined as triglycerides ≥ 500 mg/dL, with volanesorsen, a second-generation antisense oligonucleotide that inhibits apoC-III synthesis. Antisense technology is based on the use of synthetic nucleic acid sequences to interrupt the production of a specified protein by targeting the corresponding messenger RNA, or mRNA, that encodes that protein. Antisense drugs are therefore able to reduce the level of proteins that cause or contribute to the progression of various diseases, including hypertriglyceridemia.

Lipid and lipoproteins, including LDL-C, triglycerides, apoCIII, and Lp(a), are associated with development and progression of atherosclerotic cardiovascular diseases. Moreover, increased TG levels are associated with incidents of acute pancreatitis and liver disease such as non-alcoholic steatohepatitis (NASH). The protein apoC-III, the second most abundant lipoprotein, circulates in the bloodstream attached to particles containing triglycerides and inhibits TG-hydrolysis. High levels of apoC-III have been associated with hypertriglyceredemia.

Mutations in the apoC-III gene that impair its function result in lower TG levels and a correlated reduction in cardiovascular risk. Conversely, overexpression of the same gene has been associated with elevated TG levels and increased risk of both cardiovascular events and pancreatitis. In recent years, there has been an effort to develop strategies to reduce levels of apoC-III in order to reduce elevated triglyceride levels. 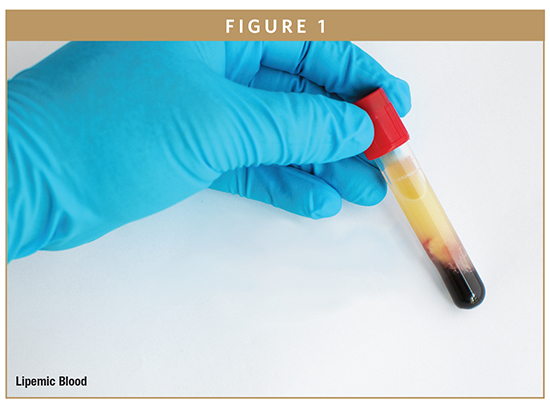 The COMPASS clinical trial was a randomized, multi-center, double-blind, placebo-controlled, 26-week, Phase 3 study to evaluate the effect of apoC-III reduction with the investigational antisense drug volanesorsen on TG levels in patients with hypertriglyceridemia. The trial included patients with fasting TG ≥ 500 mg/dL, (n=113, mean ±SD, TG level 1261 ±955mg/dL) who were randomized 2:1 on volanesorsen or placebo. Patients were treated with 300-mg volanesorsen subcutaneously (SC) of placebo once a week for 26 weeks.

Results from the clinical study indicate that antisense technology can result in significant reductions in triglyceride levels in patients with hypertriglyceridemia:

The COMPASS study was a supportive study used to further validate findings from the APPROACH study, a randomized, double-blind, Phase 3 study of volanesorsen in the treatment of patients with FCS specifically.

The APPROACH study was a 52-week Phase 3 study in 66 patients with FCS.1-3 While the enzyme lipoprotein lipase (LPL) normally breaks down chylomicrons, people with FCS do not have functioning LPL, resulting in circulating triglyceride levels in the thousands (mg/dL) or more than 10 times the upper limit of normal.1-4 FCS patients have a significant risk of morbidity and mortality, including recurrent episodes of acute pancreatitis, which can be fatal.5-7 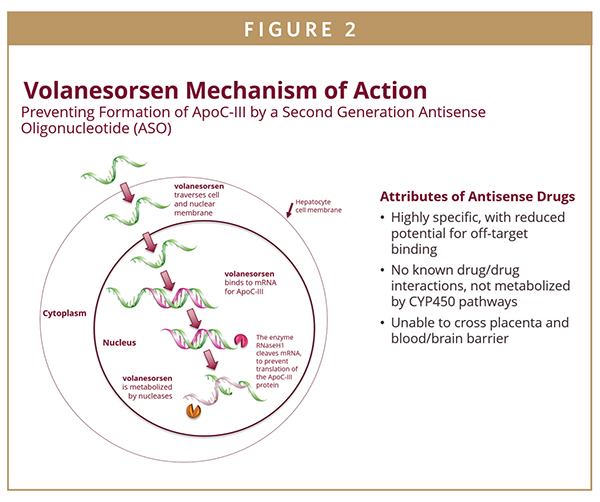 In the APPROACH study, FCS patients treated with volanesorsen experienced robust reductions in triglycerides and related benefits, including:

THE IMPACT ON STANDARD OF CARE

Guidelines established by the Endocrine Society suggest dietary counseling and weight loss for the treatment of mild-to-moderate hypertriglyceridemia in patients who are overweight or obese. Patients with more severe forms of hypertriglyceridemia are typically managed with reduced intake of dietary fat and simple carbohydrates in combination with drug therapy including fibrates, nicotinic acid, omega-3 fatty acids or statins, alone or in combination. In many patients, currently available management strategies are unable to normalize triglyceride levels or decrease the risk of pancreatitis. 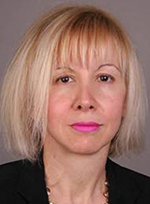 Dr. Ioanna Gouni-Berthold is Professor of Medicine at the University of Cologne, where she works as a senior registrar at the Center for Endocrinology, Diabetes, and Preventive Medicine. She is an internist and endocrinologist, double-board certified in the United States and in Germany and a Fellow of the Royal Society of Public Health in the United Kingdom. Her work has been published in various high-impact international journals, such as the JAMA, European Heart Journal, Diabetes Care, and Atherosclerosis.