Theranostics is a patient management strategy involving the integration of diagnostics and therapeutics. In nuclear medicine, the term “theranostics” refers to the use of specific targeting molecules labeled with either diagnostic radionuclides (eg, positron or gamma emitters) or with therapeutic radionuclides (eg, beta or alpha emitters) for diagnosis and therapy of a particular malignancy. Therefore, molecular imaging and diagnosis of the disease can be effectively followed by treatment utilizing the same targeting molecule. In practice, this concept dates back more than 50 years.1 More recently, however, among the most successful examples of theranostics are peptide receptor scintigraphy (PRS) and peptide receptor radionuclide therapy (PRRT), also called radioligand therapy (RLT) of neuroendocrine tumors (NETs), an orphan disease. The development of these modalities through the radiolabeling of somatostatin analogs with various radionuclides has led to a revolution in patient management and established a foundation for expansion of the theranostic principle into other oncology indications.

The following provides a review of the evolution and development of theranostics, in general, citing the theranostic radionuclide approach to the management of neuroendocrine tumors to highlight this evolving modality.

THE ORIGIN OF & RATIONALE FOR THERANOSTICS

In 1941, the concept of using radioactive iodine for imaging and treatment of patients with hyperthyroidism and later thyroid cancer was first applied by Saul Hertz.1 His discoveries inspired the invention of some of the most successful examples of the theranostic concept in nuclear medicine, peptide receptor scintigraphy (PRS), and peptide receptor radionuclide therapy (PRRT). Through its capabilities in disease identification, targeted treatment, and monitoring, theranostics has opened a new chapter in precision medicine. Continued advancements in the field will help optimize drug efficacy and safety as well as streamline the drug development process.

THE ROLE OF PEPTIDE RECEPTORS

PRS and PRRT were primarily first used in patients with neuroendocrine tumors (NETs) in the late 1980s and early 1990s, although these acronyms were not used in literature until 1994.2,3 In 1993, data on imaging using Indium-111 (In-111)-labeled pentetreotide in more than 1,000 patients were published in the European Journal of Nuclear Medicine.4 In 1994, the FDA approved In-111-pentetreotide as an imaging radiopharmaceutical, exclusively based on results achieved in approximately 350 European patients because its sensitivity and specificity in patients with gastroenteropancreatic neuroendocrine tumors (GEP-NETs) were greater than those obtained using Computed Tomography (CT) or Magnetic Resonance Imaging (MRI). In-111-pentetreotide was the first receptor-targeted, peptide-based imaging radiopharmaceutical ever approved.

Following the model of radioiodine use in thyroid cancer, patients were also treated with high doses of In-111-pentetreotide. After several years of PRRT experience with In-111-pentetreotide (Figure 1), it became clear that other radionuclides, such as yttrium-90 (Y-90) or a new radionuclide, lutetium-177 (Lu-177), might be better suited for a therapeutic regimen, due to longer range of tissue penetration.5 In the late 1990s and early 2000s, “early adopters” of PRRT were successfully using Y-90 coupled to various somatostatin analogs. In 1998, Y-90-labeled dotatoc was used in the treatment of 10 patients with different somatostatin receptor-positive tumors.6 In 2001, the results of a Phase 2 study of Y-90-dotatoc in 41 patients with GEP-NETs and bronchial tumors demonstrated an overall response rate of 24% and a significant reduction in carcinoid syndrome in 83% of the patients.7 In 1998, a group called Specific Peptides for Imaging and Radio Isotope Therapy (SPIRIT) was established to develop marketable radiopharmaceuticals using targeting peptides and peptide-like molecules to deliver diagnostic or therapeutic doses of radiation to specific sites within the body.8 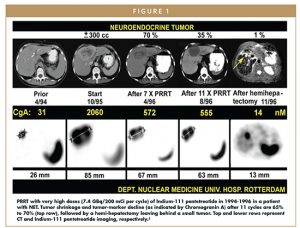 One of the targeting peptides originating from one of the members of this group was dotatate, which was coupled with Lu-177. The first clinical studies with dotatate started in 2000 and employed a clinical protocol that later formed the basis of the NETTER-1 multinational Phase 3 trial.9 In 2003, a study of Lu-177 dotatate therapy in 35 patients with GEP-NETs demonstrated complete remission in 1 patient (3%), partial remission in 12 patients (35%), stable disease in 14 patients (41%), and progressive disease in 7 patients (21%), including 3 patients who died of disease-related causes during the treatment period.10

In 2010, commercial pharma stepped in and developed good manufacturing process-compliant manufacturing of Lu-177 dotatate, continued to negotiate a regulatory pathway with the US FDA and the European Medicines Agency, and a pivotal multinational Phase 3 study (NETTER-1) was started at 41 global sites in 2012.

By 2015, the NETTER-1 study had met its primary endpoint of assessing progression-free survival, demonstrating that Lu-177 dotatate significantly improved progression-free survival compared with high-dose octreotide acetate injection in patients with advanced midgut NETs.9 In January 2017, initial results of this Phase 3 trial of Lu-177 dotatate in patients with midgut NETs were published in the New England Journal of Medicine.9 In June 2018, additional NETTER-1 data were published in the Journal of Clinical Oncology demonstrating that treatment with Lu-177 dotatate provides clinically relevant improvement in certain symptoms and significantly longer time to deterioration in certain quality of life measures for patients with progressive midgut neuroendocrine tumors compared to octreotide LAR alone.10

For patients, theranostics may lead to more effective disease management, tailoring therapeutic intervention to patients who would benefit the most, while reducing or eliminating unnecessary treatment. By selecting patients who have a higher likelihood of responding to treatments, a theranostic approach is both efficient and patient centric.

For physicians, theranostics may enhance their ability to diagnose and stage disease, select optimal therapies, and/or monitor treatment response and disease progression, improving prognostic capability for better health outcomes. For payers, theranostic approaches can reduce costs associated with suboptimal diagnostics and treatments, and shorten the time needed to diagnose and treat patients effectively.

PRS and PRRT have gained popularity among NET specialists worldwide as theranostic approaches for their patients, although until the Society of Nuclear Medicine and Molecular Imaging and the European NET Society published guidelines for their use, there were few standardized clinical practices for the administration and implementation of these procedures or the evaluation of patient progress.

US and European regulatory approvals of gallium Ga 68 dotatate and gallium (Ga 68) edotreotide, respectively, for the localization of NETs by PET/CT has already significantly changed the field of NET imaging, and US and European approvals of lutetium Lu 177 dotatate (INN:lutetium (177Lu) oxodotreotide) PRRT makes this the first nuclear medicine theranostic pairing ever approved in oncology. Current research activities are exploring the use of this same concept for many other cancers, seeking more novel targets and targeting molecules. For example, the investigation of radiolabeled compounds targeting prostate-specific membrane antigen (PSMA) for both diagnostic and therapeutic applications, is considered to be a milestone in the management of patients with castration-resistant prostate cancer. The observation of frequent, persistent PSMA expression in such patients has provided the rationale for the recent investigations of PSMA RLT, and there are now several such PSMA compounds in clinical development (Figure 2). Similarly, radiolabeled antagonists of gastrin-releasing peptide receptor (GRPR) have recently started clinical investigation.11 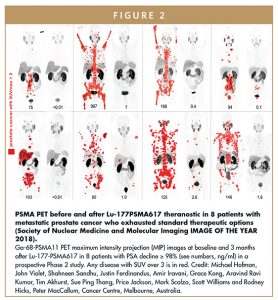 Nuclear medicine, and particularly theranostics, is poised to become a key part of patient management in the future, because of its many advantages over other separate diagnostics and treatments. For NET patients, the use of agents like gallium Ga 68 dotatate and gallium (Ga 68) edotreotide, and lutetium Lu 177 dotatate can potentially facilitate patients’ cancer management from initial diagnosis to therapeutic protocols and follow-up.

The nuclear medicine approach to oncology theranostics has the potential to provide value for patients, physicians, payers, and developers, based on improved targeting mechanisms, patient selection, and ability to assess treatment efficacy.

Although nuclear medicine has been around for many years, it has principally been the domain of nuclear medicine physicians and endocrinologists. However, with its applications in oncology theranostics, nuclear medicine is at a tipping point. As with immuno-oncology – which as a concept is also not new – the advent of checkpoint inhibitors has provided medical oncologists with valuable tools and resources for cancer patient management. The theranostic approach represented by gallium Ga 68 dotatate/gallium (Ga 68) edotreotide and lutetium Lu 177 dotatate can similarly expand the scope of medical oncology and lead to a new era for nuclear medicine. 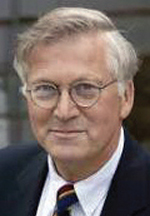 Professor Eric P. Krenning, MD, PhD, FRCP, is emeritus professor Nuclear Medicine at Erasmus University Medical Center, Rotterdam, The Netherlands. Currently, he serves as Director, Cyclotron Rotterdam BV situated on the campus of Erasmus University Medical Center. In 2012, Professor Krenning was awarded The EANM Honorary Membership reserved for persons of outstanding distinction practicing in the field of nuclear medicine and who provided great service or reputation to the EANM or the field of Nuclear Medicine. In 2014, he was awarded The European Neuroendocrine Tumor Society’s (ENETS) Life Achievement Award in recognition of nearly 35 years of scientific research in the field of neuroendocrine tumor disease. He serves as ENETS Centers of Excellence auditor. He spent his career at Erasmus University in Rotterdam, heading the Department of Nuclear Medicine from 1985 until 2012. His main research interests include Thyroidology and Molecular Medicine with radioactive peptides for imaging and therapy. He has co-authored more than 500 peer-reviewed articles since 1975, and has been much cited and greatly respected for his contributions to better scientific practices. 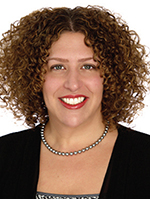 Rachel Levine is the Director of Communications for Advanced Accelerator Applications, S.A., a radiopharmaceutical company specializing in nuclear medicine theranostics. She has specialized in strategic communications for the healthcare sector (including biotech, speciality pharmaceuticals, managed care, healthcare services, and medical device and delivery) since 2000, with a primary focus on oncology. Prior to joining AAA, Rachel advised a diverse group of international companies in healthcare and other sectors as Managing Director of a global investor and public relations agency, and then as Vice President and Head of Investor Relations and Communications for a publicly traded biotechnology company.