Antimicrobial resistance (AMR) is the third leading cause of death worldwide – having estimated 4.95 million deaths associ­ated with bacterial AMR in 2019, including 1.27 million deaths attributable to bacterial AMR.1 As a result of persistent antibiotic use and hospital-acquired infections, the rapid emergence of AMR threatens our ability to treat common infections and support modern medicine.

AMR emerges naturally as an evolutionary response by mi­crobes to avoid death. These resistance mechanisms are often encoded in the resistant microbe’s DNA and are transferred to all daughter cells that can easily spread unchecked by current an­tibiotics, especially in hospital settings.

Most commonly, deadly hospital-acquired infections are a result of a group of bacteria known as ESKAPE pathogens that harbor multidrug-resistant properties that render existing antibi­otics ineffective. Specifically, ESKAPE is an acronym that stands for six different commonly found multidrug-resistant pathogens: Enterococcus faecium, Staphylococcus aureus, Klebsiella pneumo­niae, Acinetobacter baumannii, Pseudomonas aeruginosa, and Enterobacter species. ESKAPE pathogens represent one of the biggest threats to modern medicine, and we desperately need an intervention.2

COMMON CLASSES OF ANTIBIOTICS & WHERE THEY FALL SHORT

Alexander Fleming revolutionized medicine by discovering modern-day penicillin in 1928. This discovery sparked the golden age of antibiotics, and 12 new classes of antibiotics were launched from 1935 to 1968.3 However, after 1969, antibiotic discovery slowed, with only a handful of new classes discovered in the 50 years since.

With this drought of discovery, microbes have developed re­sistance, and physicians are often left with few tools to fight AMR for seemingly the most innocuous of infections. Below are some of the major classes of naturally derived antibiotics used today and their limitations when facing AMR. 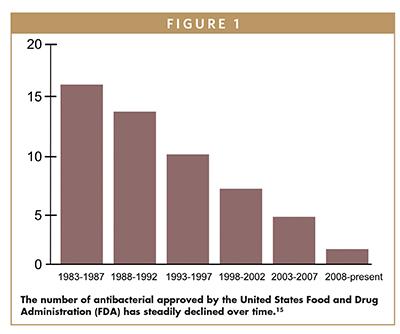 Beta-lactams: This is the oldest documented antibiotic class and is composed of a number of antibiotics, including penicillin and cephalosporin derived from fungi. Beta-lactams work by inhibit­ing bacterial wall production and commonly cause several side effects. They have a broad spectrum of activity and are commonly utilized in dental, skin, respiratory tract, ear, kidney, bladder, uri­nary tract, and bone infections. Due to their extensive use over the decades, beta-lactams have significantly contributed to the emergence of ESKAPE pathogens.4

Tetracyclines: This antibiotic class is derived from Streptomyces bacteria from soil. Tetracyclines are broad-spectrum antibiotics most commonly used for rosacea and acne. They are bacterio­static, meaning that they prevent bacteria from growing by in­hibiting protein synthesis but do not necessarily kill them. However, tetracyclines become toxic over time and can cause significant kidney damage. A diverse range of bacteria, in­cluding the ESKAPE pathogens, are quickly becoming resistant to this class of antibi­otics.

Macrolides: This antibiotic class is also derived from soil-borne Streptomyces bac­teria, and the most common type is eryth­romycin that can treat indications including pneumonia and skin infections. Macrolides are bacteriostatic, working similarly to tetracyclines by inhibiting pro­tein synthesis without killing the bacteria. This class of antibiotics mainly act on Gram-positive bacteria and intracellular pathogens, and due to the high incidence of these types of infections, AMR is increas­ing against this drug class.

Aminoglycosides: This class is also de­rived from Streptomyces from the soil and is bactericidal, inhibiting bacterial protein synthesis. Aminoglycosides are used to fight Gram-negative bacteria across vari­ous disease indications and can be used in combination with other antibiotics. They can only be administered intravenously because the stomach breaks them down easily. This class can also cause severe kid­ney damage and irreversible damage to the ears. However, bacteria quickly be­come resistant to this class, and as such, aminoglycosides are considered a short-term antibiotic.

Following the first few decades of their discovery, antibiotics were highly effective, and physicians often prescribed them for use in infections, including nonbacterial in­fections.5 This, along with extensive and unregulated use of antibiotics in agricul­ture in the US and across the world, has contributed to the emergence of AMR.6 These traditional antibiotics kill bacteria or inhibit their growth by engaging a single target, acting within the bacteria or on the surface, and in many cases, the exposure of bacteria to a single target antibiotic leads to the development of AMR shortly after repeated use.

Despite the growing resistance, the global antibiotic pipeline remains deficient as most drugs advancing through the clinic are predominantly derivatives of well-established antibiotic classes and do not include any new class of molecules or new mechanisms of action.7 The last time researchers discovered the most recent class of highly effective antibiotics was over 30 years ago, in 1987, and physicians are running out of tools to effectively treat bac­terial infections.

To highlight this critical situation, a re­cent BIO industry analysis and evaluation of the current state of antibacterial re­search and development summarized the evolving crisis, “Although there have been 164 FDA-approved direct-acting antibac­terial new chemical entities (NCEs) since the early 1900s, only one new molecular target NCE has been approved over the last 35 years, illustrating a need to broaden the antibacterial discovery en­gine. There have been 11 indirect-acting NCEs approved, including seven drugs that work to extend the activity of existing drugs and four monoclonal antibodies specific for exotoxins.”8

The need for innovation is clear and unprecedented as the current pipeline for novel antibacterial drugs is still largely de­pendent on existing targets and will not address the burgeoning AMR crisis. Consequently, these startling dynamics make it imperative to drive investment into alter­native approaches that have the potential to address these issues.

Targeted Design: Synthetic antibiotics are designed with the end goal in mind. Sci­entists can engineer compounds to in­crease molecule specificity or enhance the binding of a chosen ligand, opening the possibility for compounds that can target key bacterial ligands efficiently.

Rapid Large-Scale Screening: When a synthetic compound is designed and pro­duced at scale, its activity is screened against a range of drug targets, including those it was designed to target. Natural products contain inherently more structural diversity than synthetic compounds, and screening takes significantly longer to identify target sites. However, if the target is identified before the design in synthetic compounds, the screening process pro­gresses much more quickly.

Efficient Manufacturing: Another notable advantage is that synthetic anti-infectives may be manufactured more efficiently than current antibiotics on the market. Tra­ditional antibiotics are usually sourced from fungi or soil bacteria, relying on fer­mentation processes and large-scale bac­terial culture followed by an extensive purification stage. On the contrary, the synthetic process gives rise to a 99.9% product yield in hours and requires no specialized and costly waste removal.

Cost-Effective: Natural antibiotics are often produced by organisms in exotic en­vironments that are challenging to find and to grow in the lab, and the extensive time and effort it takes to search, source, and screen these compounds are costly. However, the design and development of synthetic anti-infectives can be extremely fast, spanning only a few days as com­pared to months or even longer for natu­rally sourced compounds.

BRINGING A NEW CLASS OF ANTI-INFECTIVES INTO THE CLINIC

Given the rapidly rising rates of AMR to various anti-infectives, it is imperative that additional treatment options are de­veloped to avoid a future in which anti-in­fectives are entirely futile against pathogens, and Recce Pharmaceuticals is rising to the challenge. Recce is developing new classes of anti-infectives that hold the potential to resolve multidrug-resistant in­fections safely and effectively.

This new class includes RECCE© 327 (R327), a synthetic polymer designed to target a variety of infections caused by even the most resistant and difficult-to-treat bacteria. In March 2021, R327 was included in The Pew Charitable Trusts’ list of Non-traditional Products in Develop­ment to Combat Bacterial Infections as the only clinical-stage new class of antibiotic in the world being developed for sepsis, the largest unmet medical need in human health.9 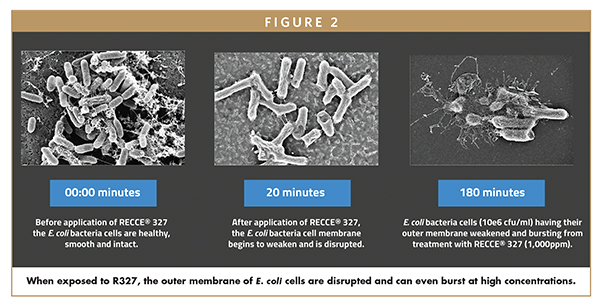 Independent studies undertaken by leading experts in bacteria Mechanism of Action (MoA) analysis have identified R327 to have a multi-faceted MoA: R327 per­meabilizes cell membrane and enters the cell; R327 interrupts bacterial cellular en­ergetics via ATP synthesis; cellular division and non-dividing cell functions are disrupted; R327 is rapidly and irreversibly bactericidal – and at high concentrations causes cell lysis.10 Through this multi-lay­ered MoA, R327 does not display any loss of efficacy against both Gram-positive and Gram-negative bacteria, including their multidrug-resistant superbug forms, even after repeated use11 – a common failure associated with existing antibiotics. Most notably, current antibiotics rarely retain bactericidal activities against non-dividing or stationary phase bacterial cells; how­ever, R327 showed remarkable activity against slow-growing bacteria, indicating potential antibacterial activity in biofilms.10

Recce has an automated manufactur­ing process, presently supporting clinical trials, that takes approximately an hour – producing 500 doses per automated man­ufacture output with a 99.9% product yield, allowing production to quickly and efficiently scale up to meet demand.11

Most importantly, Recce’s anti-infec­tives can be administered intravenously, topically, nasally, orally, and inhaled to allow clinicians to use the most suitable formulation based on the type of infection and the patient’s individual needs. Recce currently has two ongoing clinical pro­grams: a Phase 1 intravenously adminis­trated dose-escalation study in healthy subjects; and a topical administration in a Phase 1/2 trial of burn wound infections, including those caused by methicillin-resis­tant Staphylococcus aureus (MRSA) – one of the two most common healthcare-ac­quired infections.12

The Phase 1 intravenous safety study is an ascending dose, randomized, placebo-controlled, parallel, double-blind, single-dose study being conducted at Ade­laide’s CMAX clinical trial facility in Aus­tralia. This study is evaluating the safety and pharmacokinetics of R327 in healthy subjects, and so far, the interim data is promising. Upon successful completion of this trial, Recce will look to initiate a Phase 2 clinical trial in sepsis shortly thereafter. With 11 million sepsis-related deaths recorded and 48.9 million incident cases of sepsis recorded worldwide, there is a strong unmet need for a potent broad-spectrum anti-infective to treat this life-threatening infection without introducing toxicity or contributing to the rise of AMR.1

The topical Phase 1/2 infected burn wounds study is assessing the efficacy of R327 as a spray-on anti-infective for the treatment of burn wound infections across two dosing schedules at Fiona Stanley Hospital, Perth, Australia. The promising results thus far have shown broad-spec­trum activity, with visible infection reduc­tion within <24 hours and no adverse effects or abnormalities reported; even the chronic infections were cleared within 7 days. Patients with burn wounds often suf­fer severe bacterial infections that are painful, prevent wound healing, and can even result in death if not properly treated. Notably, many of these infections are re­sistant to most available antibiotics.13

In addition to Recce’s current clinical trials, the team is actively assessing the ef­ficacy of Recce’s compounds, including R435, against other infectious diseases in preclinical studies. For example, Heli­cobacter pylori (H. pylori) is a bacterial in­fection in the stomach that causes peptic ulcers, and current antibiotic therapies are rapidly becoming ineffective due to the emergence of resistant strains. In preclinical studies, R435 has shown efficacy against H. pylori in a dose-dependent manner. Similar results have been ob­served for R327 in the treatment of mul­tidrug-resistant Streptococcus pneumoniae and Pseudomonas aeruginosa in bacterial sinusitis.

In summary, when it is considered that, in the US alone, more than 2.8 mil­lion antibiotic-resistant infections occur each year, with more than 35,000 people dying as a result, the need for innovative broad-spectrum anti-infectives is impera­tive.14 Synthetic anti-infectives offer undeniable benefits to address the global threat of AMR, and Recce is stepping up to pro­vide potential solutions with their new class of synthetic anti-infectives designed to em­power physicians with a broad-spectrum treatment option. With plans to continue developing R327 and additional compounds of the drug for other serious infec­tious diseases, the team will continue leveraging its versatile synthetic polymer to create further broad-spectrum anti-infec­tives to address the urgent global health threat posed by antibiotic-resistant super­bugs. 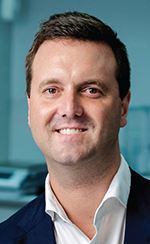 James Graham is the Chief Executive Officer and Managing Director at Recce Pharmaceuticals. Prior to this he served 5 years as Executive Director and he has extensive experience in marketing, business development, and commercialisation of early-stage technologies with global potential. Under his leadership Recce Pharmaceuticals is on a growth path as an emerging global health leader in synthetic anti-infectives by pioneering the development and commercialisation of new classes of synthetic anti-infectives. James was the founding investor of Recce and to date has successfully raised USD $34 million for the Company.