An in-house novel RNA-editing technology called Axiomer® may be the treatment answer for people with rare genetic conditions. Axiomer utilizes a person’s own RNA repair mechanism. It can be used to attract this mechanism to a specific mutation in the RNA, where it alters a single nucleotide to repair the mutation and restore the broken or missing protein. Around 20,000 disease-causing mutations have been identified that can be reversed with Axiomer technology, which has many specific advantages it offers relative to DNA-editing techniques.

ADARS, THE KEY TO AXIOMER TECHNOLOGY

The key to Axiomer technology is a class of endogenous enzymes called adenosine deaminases acting on double-stranded RNA (ADARs). ADARs are responsible for binding to double stranded RNA (dsRNA) and are responsible for converting adenosine (A) to inosine (I) through a process called deamination. The net effect of A-to-I editing at the RNA level is effectively an A-to-G change in the original DNA code. There are two ADARs that have been identified, ADAR1 and ADAR2. Both have been shown to be expressed in most human tissues. These ADARs exist for two known purposes: as a defense strategy against RNA-based viruses and as a means of site-specific gene editing via A-to-I substitutions.1

All known ADARs share a highly conserved catalytic deaminase domain. They are responsible for the conversion of adenosine to inosine and a variable number of double-stranded RNA-binding domains (dsRBDs). It’s the dsRBDs that are the key to the Axiomer technology: ProQR’s scientists realized that it would be possible to utilize these regions to make targeted corrections to disease-causing mutations at the RNA-level. Through the design of specialized editing oligonucleutides (EONs), short single-stranded RNA molecules with a sequence complementary to a known mutation, ProQR can recruit endogenous ADARs to the mutation site to make a needed A-to-I substitution (Figure 1). We have also been developing computational EON design approaches that help achieve high-potency for making RNA corrections. These corrections, while targeted and initiated by synthetic EONs, are completed by a person’s own repair machinery, which essentially helps people repair their own RNA. 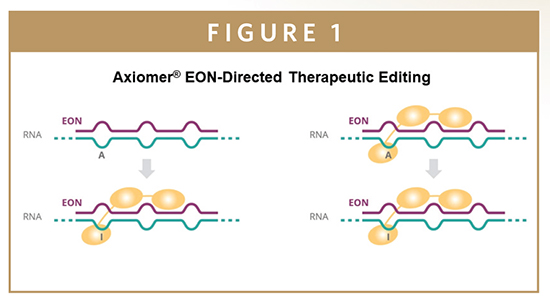 Because EONs are the key to Axiomer technology, rational EON design strategies are necessary to ensure the creation of effective RNA-editing therapies. This could help streamline a potentially complex and costly design process. RNA molecules are naturally less stable than DNA due to the presence of a hydroxyl group attached to the 2′ position of the sugar-phosphate backbone, making the molecules more prone to degradation. Our team realized that by making 2′ modifications to an RNA-based EON, it is possible to increase its stability, resulting in a longer lasting RNA-editing effect. Increasing EON stability also has the effect of requiring a lower dose for effective editing as well as increasing the duration of effect before additional administrations of the treatment are required to prolong the therapeutic effect.

Rational EON design relies both on computational and empirical approaches to achieve high potency and drug-like properties. To guide the process of optimal EON design, scientists used the ADAR2 structure as a template and calculated atomic models of the protein bound to an EON-RNA complex.2 This allowed us to avoid blocking the ADAR2 deaminase domain with the chemically modified nucleotides of the EONs and provides more efficient recruitment of ADAR to the target site. These computer-generated models allowed researchers to generate a map of specific positions within the EONs, while bound to their RNA target, that do not tolerate 2′ modifications because of their propensity to alter the interaction with ADAR. Following this predictive computer modeling, we can screen and verify these EON oligos with in vitro experiments. Through successive validation of the computer-generated model, the process of designing novel EONs for therapeutic purposes is now greatly streamlined. This unique design can make modifications to EONs that improve the efficiency of RNA editing.

One of the most common mutations that causes Hurler syndrome in humans, IDUA W402X, results from a single DNA base change (TGG -> TAG). This simple mutation causes protein transcription to end prematurely, resulting in a shortened and non-functional iduronidase enzyme. An analogous mutation, IDUA W392X, causes Hurler syndrome in mice. Because this is a similar G-to-A mutation, it can be used as a test model for Axiomer’s A-to-I editing in RNA (inosine is the RNA equivalent to guanine, ‘G’, in DNA). As a first in vivo proof-of-concept test of the potential for Axiomer technology to be used as a novel therapy for genetic disorders, we designed and screened a panel of EONs targeting this mutation. Testing the EONs showed that the technology had the ability to restore full length iduronidase mRNA expression (Figure 2a). In addition, IDUA W392X targeting EONs also restored iduronidase enzyme activity in the mouse model system (Figure 2b). It also caused a decrease in the accumulation of GAGs suggesting that Axiomer therapy was working as predicted (Figure 2c). 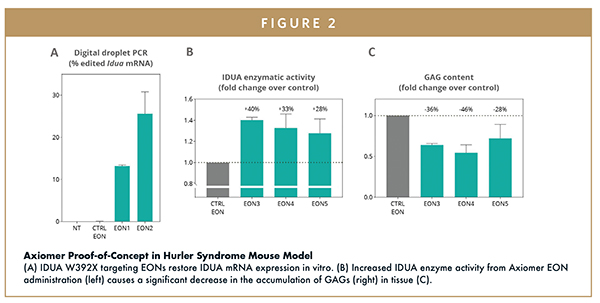 Being able to alter the course of Hurler syndrome in a mouse model is just the first step of many for this technology. The goal is to create transformative therapies so that patients and families will not have to suffer from debilitating rare genetic conditions. With Axiomer technology, this technique can potentially be brought to bear on a wide variety of conditions. There are currently over 23,000 G-to-A mutations known to result in a genetic disorder and, with Axiomer, all these sites potentially become targets for therapeutic intervention.

Not all G-to-A mutations cause a complete loss of function on a protein. One example is Hurler syndrome, in which the mutation directly leads to a shorter nonfunctional product. Sometimes the DNA base substitution leads to a change in a single amino acid of a protein. Changing an amino acid can alter the function of a protein without changing its level of expression. This can lead to protein malfunction, where the protein is still expressed at the right levels and in the correct cells. Simply lacking the ability to function properly can also cause disorders. Additionally, some G-to-A mutations will occur in sections of the genome that are not responsible for directly encoding a functional protein. Instead, these mutations will occur in a region responsible for controlling gene expression. This results in a significant increase or decrease in the amount of certain proteins, which can also be the cause of health problems. These are all additional instances where Axiomer’s rationally designed EONs can potentially intervene and restore altered gene expression caused by genetic mutation.

Axiomer technology offers several advantages over other existing gene-editing techniques currently being applied to the treatment of genetic disorders, such as CRISPR/CAS9 and traditional viral-based gene therapy. First, EONs are small molecules that do not require a vector for delivery. Accurate and efficient payload delivery is a major challenge for many gene-editing techniques due to the large size of the required molecular components (for example, CAS9 enzymes can run anywhere from about 3 kB to 5 kB in size, more than 100x the size of EONs). The small size of EONs required for targeted RNA editing in Axiomer in combination with the fact that the repair enzyme, ADAR, already exists in almost all human target organs. This is the basis for a simpler gene-editing system overall.

In addition, CRISPR genome editing creates permanent changes to a person’s genetic code. Many viral vectors that are being used for gene therapy integrate their viral genomes into the host’s DNA. This alters the genome in a permanent fashion. Permanent alterations of the genome, when solely therapeutic, can be positive. But recent evidence has surfaced demonstrating off-target CRISPR editing that suggests there are significant inherent risks to using this technique. Off-target genome editing can disrupt other normally functioning genes and can cause health problems or toxicity of their own. EONs used for Axiomer have high-fidelity for their intended target such that there is a low probability of off-target activity. In addition to the nonpermanent nature of Axiomer, any potential damage that could happen to the RNA will not be permanent.

Axiomer technology, a powerful RNA editing technique that enables the body to repair itself, is being developed as a next-generation therapeutic option for genetic disorders. With the potential to make a difference in thousands of conditions, Axiomer is primed to be a major part of the current revolution in personalized targeted therapeutics. 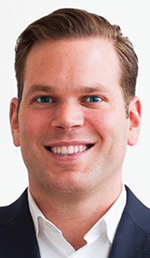 Daniel A. de Boer is a Dutch serial entrepreneur and the founding Chief Executive Officer of ProQR Therapeutics since the company’s incorporation in 2012. When his newborn son was diagnosed with a rare genetic disease, he decided to start ProQR to develop drugs for rare genetic diseases. Prior to founding ProQR, he was the founder and CEO of several IT companies, including RNA Systems, PC Basic, and Running IT, which he led through several phases of growth. Mr. de Boer is also co-founder and advisor to the CEO at Amylon Therapeutics.