Effective determination of residual drug substance after cleaning equipment used in the manufacture of pharmaceutical products is a GMP requirement and regulatory expectation. Pharmaceutical companies need a fast, reliable analytical procedure to verify that the equipment is free of residuals, but method development and validation followed by testing of swabs after the manufacture of each drug product can be time-consuming and challenging.

High-performance liquid chromatography used with mass spectrometry detection (LC -MS) is an efficient, sensitive, and accurate technology with high specificity that can analyze multiple drug substances simultaneously, saving considerable time. This article describes the benefits of LC-MS and presents an effective method developed and validated by Patheon Inc. using this technology to determine the potential residual amount of eight active ingredients used in oral contraceptive tablets after cleaning equipment used in their manufacture.

Oral contraceptive (OC) tablets are usually manufactured with combinations of active ingredients in the same tablet with extremely low dosage strengths. Developing an appropriate cleaning verification method requires detecting and quantitating the hormones at an extremely low concentration. The ideal analytical procedure for cleaning verification of equipment used in the manufacture of oral contraceptive tablets and other drug substances is a method that is rapid, accurate, sensitive, specific, linear within a reasonable working concentration range, and robust to minor testing condition changes. To meet these requirements, Patheon chose LC-MS, an analytical procedure that can simultaneously determine the potential residual carryover from multiple drug products.

LC-MS is a desirable technique due to the sensitive and highly specific nature of MS compared to other chromatographic detectors, and its ability to handle complex mixtures efficiently. MS, a primary tool for identifying residual impurities, consists of ionizing chemical compounds to generate charged molecules or molecule fragments that are selected for measurement on the basis of their mass-to-charge ratios.

LC-MS provides sensitivity at low concentrations and demands less critical chromatographic separations of components, requires a short analytical run time, and can be applied to a wide range of pharmaceutical APIs. Instead of having to develop a series of methods for multiple drugs, fast scanning speeds allow a high degree of multiplexing, enabling many compounds to be analyzed in a single run. LC-MS technology, however, does require considerable technical expertise and specialist training.

Cleaning residual limits (CRLs) for each hormone from a swab applied to a 100-cm2 area and extracted into 10 mL of solvent ranged from 0.006 to 0.08 μg/mL for EE, and from 0.03 to 1.0 μg/mL for other hormones. Quantitation limits were significantly lower than the required CRLs, and the final working standard concentration was arbitrarily set up at 0.05 μg/mL for all hormones.

Five mg each of the hormone reference standards were dissolved and diluted to volume with methanol. These solutions were further diluted with 40% methanol to provide a final concentration for each hormone of approximately 0.05 μg/mL.

Sample Preparation
The sample for the recovery test was prepared by simulating residuals from the equipment surface and spiking 0.5-mL standard solution at 1 μg/mL for each hormone onto a stainless steel coupon. Using swabs pretreated with 70% isopropyl alcohol, the chemists swabbed the surface, collecting residual samples. The swabs were then transferred into 20-mL scintillation vials, and the analytes extracted with 10.0-mL 40% methanol with sonication for 10 minutes.

The hormone compounds were separated on an LC column with a 4-minute gradient program, and detected by mass-to-charge ratio using multiple reaction monitoring (MRM). As the residual APIs can be ionized, Patheon used MS due to its selectivity and sensitivity. The method was evaluated for potential interferences, limit of detection, and limit of quantitation and tested to ensure acceptable levels of precision, accuracy, and linearity. Quantitation was performed by external standardization using peak areas.

A typical LC-MS chromatogram that depicts the separation of the 8 OC hormones is illustrated in Figure 1. Figure 2 depicts a typical mass spectrum of one of the hormones, norethindrone, that has been extracted from the chromatogram shown in Figure 1. Based on this mass spectrum, the fragment ion with m/z = 109.3 was used for quantitation for this component. 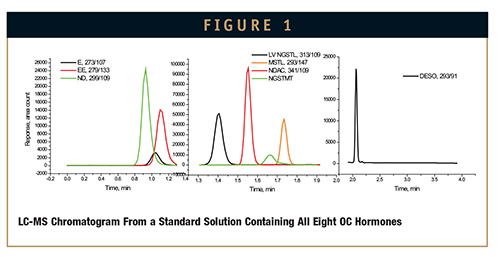 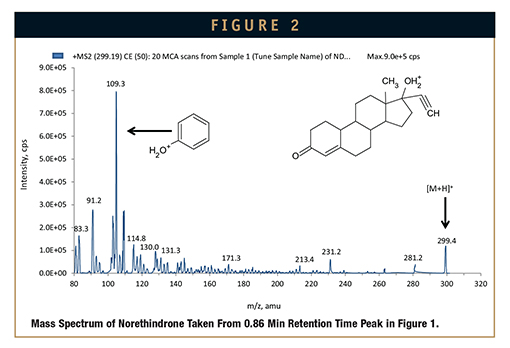 Sensitivity
The quantitation limits (QLs) were evaluated by making serial dilutions of a standard solution with 40% methanol and injecting them onto an LC-MS system. All signal-to-noise ratios were far above the typical value of 10:1 per ICH Q2 guidance. The QL solution had concentrations much lower that the corresponding CRLs calculated for each hormone. Desogestrel showed the lowest signal to noise ratio of 69, at concentration of 0.0050 μg/mL. Six consecutive injections of the QL solution showed RSDs from 2% to 5%, lower than the 10% acceptance criterion. The data demonstrated that the method is sufficiently sensitive to determine all eight hormone residuals and the verified QLs are reliable and reproducible.

Linearity
A series of dilutions of the eight hormone standard solutions was made and tested. Peak areas of the compounds were measured and plotted against corresponding concentrations using a linear regression analysis. The results demonstrated the peak area responses are linear (r ≥ 0.995) within a concentration range of 0.005 to 0.2 μg/mL for all hormones.

Solution Stability
The stabilities of the standard and sample solutions were determined by comparing concentrations after initial preparation and then after storage of solutions. The observed hormone concentrations, expressed as a percent of their corresponding initial values, were within 92% to 104% after 4 days. The data indicated the standard and sample solutions were stable up to 4 days at room temperature or under refrigeration.

Recovery & Precision
A recovery from surface study was performed to assess the intra-assay method precision and potential recovery from the equipment surfaces. Stainless steel coupons were spiked with all eight hormones at 100% working standard level and swabbed. Six independent samples were prepared and tested, and the procedure was repeated by a second Patheon chemist using a different MS instrument and LC column. The mean recovery of the hormone compounds was 71% to 93%. The RSDs for each recovery from the six samples for eight hormones were not more than 7%, and the differences in recovery between the studies performed by the two different chemists were within 6%. Recoveries for all hormones were satisfactory and analytical procedure showed adequate precision.

Accuracy
Method accuracy was evaluated with triplicate sample preparations at three levels by placing pre-treated swabs in 20-mL scintillation vials. Ten mL aliquots of the hormone solutions at concentrations of approximately 0.035 μg/mL, 0.05 μg/mL, and 0.065 μg/mL were added into each scintillation vial and sonicated in the same way as the swab sample preparation. Solutions were tested by LC-MS for hormone recoveries. The mean recoveries ranged from 93% to 108% with RSDs from 1% to 6%, indicating the swabs create no significant interferences with this procedure and the method is accurate to determine the eight residual compounds.

Specificity
Method specificity was evaluated by preparing and analyzing 10 mL of the following solutions with a pre-treated swab:

• An excipient solution containing all 19 excipients at the highest possible concentrations, based on the 28 formulations investigated, spiked with the hormones at 100% working standard level.
• A solution with all four detergents used in equipment cleaning, spiked with the eight hormones at 100% working standard level.
• Samples containing only blank swabs, blank placebo mixture, and blank detergents.

Results demonstrated the peak areas of each hormone compound from the excipient and detergent preparations spiked with the analytes were within 94% to 109% of their corresponding responses in the working standard solution. These results indicated the excipients and detergents had no impact on the hormone content. Also, no interferences were observed in the chromatograms of the swab blank, placebo blank, and detergent blank. Therefore, the method is specific for the eight hormones in the presence of the excipients, detergents, and swabs used.

Robustness
The robustness of the method was evaluated by analyzing a working standard solution with a variation of formic acid content (±0.01%) in the mobile phase and detection mass (±0.1) in quadrupoles 1 and 3. For all hormones, the peak areas were within 96% to 102% of the peak areas obtained from the target condition. The method proved robust toward these minor changes.

Pharmaceutical companies seeking an efficient, sensitive, reliable method to verify that equipment used in drug manufacture is free of residuals after cleaning can benefit from LC-MS, which can simultaneously determine multiple drug substances that can be ionized. The combined technology, which is applicable to a wide range of molecules, eliminates the need to fully resolve components as MS detection provides selectivity. Despite the lack of baseline separation, the method reliability is not compromised.

Patheon, a CDMO, developed and validated a method that was accurate, precise, specific, robust, and reliable to quantitate the eight hormone residuals collected after cleaning equipment used in the manufacture of OC drug products. As the use of this technology requires considerable expertise and sophisticated equipment, pharmaceutical companies typically rely on a contractor with the cutting-edge technology to achieve the greatest efficiency as well as accuracy in method development and validation.

The author would like to gratefully acknowledge the valuable help provided by Heng Yao in the preparation of this article.

Dr. Geoff Carr is a chemist with 36 years of experience in the pharmaceutical industry. He is Director, Analytical Development, Ontario at Patheon, former Head of Analytical Development at Chiroscience UK and Wyeth Research UK, and former Head of the British Pharmacopoeia Laboratory. Dr. Carr is a member of the US Pharmacopeia Expert Committee on General Chapters, Chemical Methods, and previous member of British and European Pharmacopoeia Committees.