Each day is a challenge for the 1.4 million US adults and 200,000 youth under age 20 living with Type 1 diabetes (T1D).1,2 Their need to frequently monitor glucose (blood sugar) levels and adjust insulin doses to counter the effects of food, exercise, and physical and mental stress is often arduous and exhausting. In the US alone, 64,000 people are newly diagnosed with T1D each year, and that number is on the rise.2 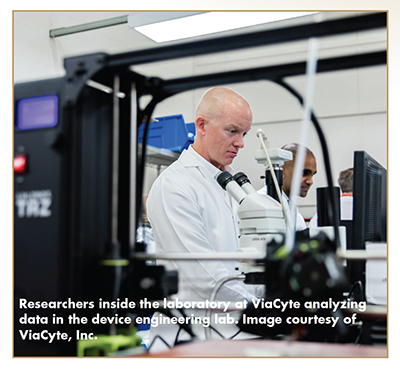 Among youth under age 20, T1D cases increased by 21% between 2001 and 2009, while annual incidence rates increased by 1.9% from 2002 to 2015.3-5 An estimated 5 million people in the US are expected to have T1D by 2050, including nearly 600,000 youth.3 Moreover, the accompanying financial impact is significant: T1D-associated healthcare expenditures and lost income are estimated at $16 billion annually.4 Clearly, T1D rep­resents a major public health problem in urgent need of solutions to better manage or cure the disease.

CHALLENGES OF LIVING WITH T1D

Since insulin was discovered in 1921, people with T1D have benefited significantly from advances such as faster-acting types of insulins, continuous glucose monitors, and automated insulin pumps. These tools have enabled less cumbersome, safer, and more physiologic insulin replacement and diabetes control. Un­fortunately, most individuals with T1D still struggle with the chal­lenges of managing their disease, including the need for multiple daytime glucose checks and frequent insulin dose adjustments to counter the effects of food, physical activity, and both physical and psychological stress on glucose levels. Moreover, because each day is different, insulin requirements vary from day to day. 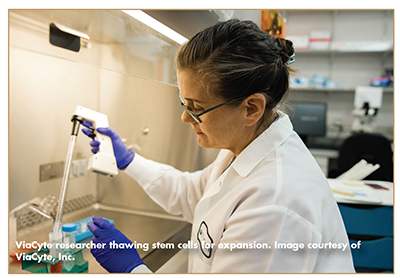 Many individuals find it challenging to follow an intensive di­abetes management regimen and therefore experience subopti­mal glycemic control. When their diabetes is uncontrolled, patients are predisposed to acute consequences, such as severe hyperglycemia (high glucose), which can lead to compromised immune function, frequent urination, dehydration, vision prob­lems, and other symptoms. In cases of missed or markedly inad­equate insulin dosing, consequences can be more severe, leading to vomiting, acidosis, coma, or even death. When T1D is uncon­trolled in the long-term, patients are at high risk for complications such as nerve damage, kidney injury and failure, vision loss, and amputations. They also have a three-fold greater likelihood of a heart attack or stroke compared to those individuals without T1D.

On the opposite end of the glucose spectrum, insulin also is commonly asso­ciated with hypoglycemia (low blood glu­cose levels), which also can be quite symptomatic, leading to coma, seizures, and death when levels fall severely low, and are unrecognized and untreated. Up to 40% of patients with T1D have hypo­glycemia unawareness, meaning they be­come physiologically unaware of low glucose levels.6 Hypoglycemia unaware­ness is particularly concerning because these individuals have a six-to-seven-fold greater risk of experiencing a severe hypo­glycemic event requiring assistance from others to bring glucose levels back to nor­mal.

Although pancreas transplants can normalize glucose levels, these interven­tions subject patients to the risks of major surgery and require them to have lifelong immunosuppressive therapy. Moreover, these organs are in short supply. Patients with T1D are therefore in need of novel in­terventions that will provide a safe and ef­fective alternative to current insulin replacement options. The field of regener­ative medicine may well hold the key. 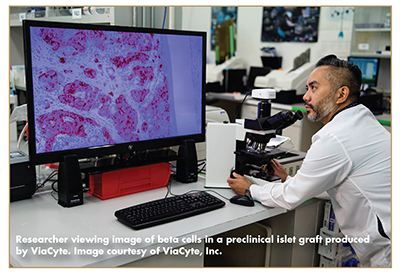 Insulin pumps and continuous glu­cose monitoring are helping improve the management of T1D but do not address the underlying biological driver of disease, namely the immune system’s attack on in­sulin-producing pancreatic beta cells. Clinical trials designed to non-selectively interrupt autoimmune attack on beta cells have proven unsuccessful when doses well-tolerated by patients are used that do not effectively suppress immune system at­tack.

Regenerative medicine, led by ad­vances in stem cell research and biomate­rials, has the potential to restore the body’s normal glucose regulatory system, offering promise in T1D treatment. These technologies, aimed at creating and im­planting viable beta cells, could enable the tighter regulation of blood glucose levels. Once vascularized, these cells can monitor real-time glucose levels and rapidly adjust insulin delivery directly into the blood­stream versus patients injecting insulin into subcutaneous tissue, which can delay ab­sorption. If successful, this mode of ther­apy could provide an adequate number of functioning beta cells to both prevent pro­gression of any existing T1D complications and avoid treatment-associated hypo­glycemia.

Already, research has shown that islet cell transplants are a viable method of re­placing the pancreas’ insulin-producing beta cells in addition to alpha and delta cells that are responsible for glucagon and somatostatin production, respectively. Transplanted cadaver-derived islet cells show promise in improving outcomes for patients with T1D, potentially providing better glycemic control, preventing severe hypoglycemia and offering relief from the need for multiple daily insulin injections or pump infusions.9

Between 1999 and 2015, more than 1,000 patients received greater than 2,000 allograft infusions of cadaver islets.10 About 90% of recipients were free of hypoglycemic events for more than 5 years, and more than 50% of recipients had sufficient allograft insulin production over the same period to preclude the need for exogenous insulin replacement.10 De­spite these promising findings, however, only about 50% of transplant recipients achieve insulin independence at 1 year following completion of cell transplanta­tion.10 Although transplantation using ca­daver-derived islet cells has demonstrated proof-of-concept for islet cell replacement therapy, there is a limited supply of these donated cells. In addition, like pancreas transplants, cadaveric islet transplants still require chronic immunosuppression.

Scientists are exploring regenerative medicine approaches to improve insulin replacement and potentially cure diabetes. Their work focuses on differentiating stem cell lines into pancreatic endodermal cells that enable implantation into patients and provide a nearly unlimited source of cells. Researchers also are investigating various cell and delivery engineering techniques aimed at ensuring long-term survival of transplanted cells. The goal is to develop a delivery device that can protect these cells from immune system attack while also enabling the exchange of glucose, hormones, and other biomolecules. Im­mune evasion is critical because if the de­vice’s outer membrane is recognized as foreign, the body’s immune response will generate an inflammatory reaction lead­ing to scarring that may impair adequate vascularization of the implanted cells, lim­iting insulin secretion.

Investigators are exploring several types of approaches, including a pouch-like device about the size of a credit card that encloses and protects the cells or a device that enables engraftment, as well as a method of individually coating islet cells with a protective polymer.11,12

Restoring normal glucose regulation requires an adequate number of insulin-producing beta cells, as well as alpha cells that produce glucagon and prevents glu­cose levels from dropping too low. Toward that end, researchers are evaluating a va­riety of approaches focused on realizing the potential of regenerative medicine therapies for T1D. One approach uses pancreatic endodermal cells produced from stem cells that differentiate to be­come both alpha and beta cells. Promising preliminary data from a clinical study of this approach were reported by the com­pany ViaCyte in June 2021 at the annual American Diabetes Association (ADA) meetings.13 In the study, subjects who were C-peptide negative at screening, indicat­ing they were not producing insulin, received subcutaneous implants of encapsulated pancreatic endodermal stem cells.

Results from a Phase 2a clinical trial presented at ADA indicated that a patient was doing well with stimulated C-peptide levels up to 0.8 ng/mL (2.67 nmol/L) at 39 weeks.13 Investigators also reported a 0.8% reduction in HbA1c from a baseline of 7.4%, as well as increased time in de­sired glucose range from 54% to 88% at week 42 in this research subject.15 These results are promising, as C-peptide levels of >0.2 nmol/l become clinically mean­ingful, and clinicians consider >70% time-in-range to be an indicator of good diabetes control.14,15

Other approaches using more mature pancreatic cells also are being evaluated in clinical trials. Vertex Pharmaceuticals, for example, launched a Phase 1/2 clinical trial using an islet product, immunosup­pression, and intraportal cell delivery. Meanwhile, Seraxis has developed a stem cell islet product, likely to be delivered in a subcutaneous device, with plans to begin pilot clinical testing soon. Scientists are focused on determining the best method and location in which to deliver pancreatic cells, including various types of implanted devices and insulin release into patients’ portal veins to more directly inhibit hepatic glucose production. This work is also eval­uating a variety of biomaterials and engi­neered cells that may eliminate the need for immunosuppressants. An example is CRISPR-based, gene-editing techniques, with the potential of developing stem cells engineered to evade immune system at­tack.16

Although regenerative medicine and stem cell-based therapies are an emerging field, preliminary data are promising and warrant further development of these in­novations. Technological advances over the past 5 years have demonstrated insulin secretion associated with improved glu­cose regulation following implantation of pancreatic endodermal stem cells. Further advances in stem-cell engineering, im­mune-evasion technologies and vascular­ization of implanted cells have the potential to generate novel therapeutics that could lead to reduced treatment bur­den for patients with T1D and infuse new energy into efforts at finding a cure. 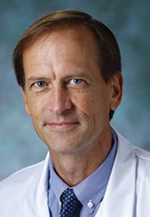 Dr. Thomas Donner is the Director of The Johns Hopkins Diabetes Center. He has been a clinical investigator in numerous NIH- and industry-funded diabetes research trials. He was a co-PI in the NIH-funded Veterans Affairs Implantable Insulin Pump Study, a Co-PI on the NIDDK-funded Diabetes Control and Complications Trial/Epidemiology of Diabetes Intervention and Complications (DCCT/EDIC) Study, and Co-PI for the Bypass Angioplasty Revascularization Investigation 2 Diabetes (BARI 2D). He has served as a PI for TrialNet, a multicenter, international consortium of investigators studying ways to prevent Type 1 diabetes and preserve insulin secretion in individuals with newly diagnosed Type 1 diabetes. He has also served as PI for DEFEND-1 that used otelixizumab to try to prevent loss of islet cell function in new onset type 1 diabetes, and was a PI for a study involving the first subcutaneous implants of encapsulated pancreatic endodermal stem cells into patients with type 1 diabetes. Dr. Donner is currently collaborating with immunologists at Johns Hopkins on the characterization of a newly discovered immune cell that expresses both B and T cell receptors that may trigger type 1 diabetes.