Fences not only make for good neighbors; they also make for better playgrounds. And, if you aren’t competitive on an ex­isting seesaw or in an existing playground, the answer may be to build one tailored to your skills.

The pharmaceutical market saw a major business shift in the 1990s. It started with an appreciation that biologics could address important therapeutic needs beyond those treatable by small mol­ecules. This was accompanied by the realization that many of the large-volume disease opportunities research-based companies depended on were figuratively disappearing. While still impor­tant, these markets were becoming unattractive in the face of dose-optimized generics. It was nearly impossible to develop a product that could tip any of these seesaws, even with heavy “lu­brication.”1

For example, the H2-blockers that revolutionized the treat­ment of peptic ulcers were challenged by generics as well as proton pump inhibitors. The hypertension market saw a succes­sion of new therapeutic products being introduced. Beta blockers were replaced by ACE inhibitors and dose-optimized calcium an­tagonists, which in turn were replaced by angiotensin receptor antagonists, all of which were facing pressure from generics. The same was true for the cash cow markets of anxiolytics and anti­depressants. There was some opportunity in the area of antipsy­chotics in terms of alternate dosage forms, but this was soon challenged by me-too products and generics.

Safety and Efficacy were “good enough,” Convenience was more than acceptable with typical once-a-day oral dosing. All that was left unoptimized was Pricing, and generics were pre­pared to meet that market need.

The response by the industry was to move from these large indications and ex­plore smaller opportunities that were far from satisfied in terms of Efficacy and Safety. Patients with cancer, autoimmune, and neurological conditions were desper­ate for new treatments. They not only wanted disease-treating medications; they also wanted disease-modifying options.

Biologics proved to be an important platform to meet these needs. It was in the 2000s that the first truly effective treat­ments with disease-modifying properties using biologics were introduced for condi­tions such as Multiple Sclerosis, Hepatitis C, Rheumatoid Arthritis, and Psoriasis.

These new products effectively created new seesaws and new playgrounds. Com­paring a product like Enbrel (etanercept) to a simple anti-inflammatory like Voltaren (diclofenac) for Rheumatoid Arthritis made no sense. Had they been on the same see­saw, a product like Enbrel or Humira would have overwhelmed any NSAID de­spite the latter’s Convenience and Pricing advantage. Meaningful competition in the future would be on these new seesaws. There would still be competition among NSAID products like Voltaren, Naprosyn, and Motrin, but this competition would largely move to an OTC playground.

This new generation of pharmaceuti­cals provided so much benefit in terms of Efficacy, often disease-modifying efficacy, that they were able to command a signifi­cant Pricing premium. Starting cautiously, companies quickly realized that prices in the range of $25,000 to $100,000 annu­ally were acceptable.

While there were complaints about Pricing from patients, physicians, payors, and government health plans, the benefits were sufficient to drive demand and sales, even when there were compromises in terms of Safety and Convenience. The im­portance of Efficacy as the driver of ac­ceptance was clearly validated, especially for these serious chronic medical condi­tions.

THE EMERGENCE OF ORPHAN PLAYGROUNDS

With the passage of Orphan Drug legislation in the US (1983), Japan (1993), and the European Union (2000), a whole new series of playgrounds became com­mercially attractive. The US Act applied to medical conditions for which there was a very small population, less than 200,000 patients, and provided certain tax benefits along with a period of exclusivity for ap­plicable products, even when composition of matter patents on these molecules had expired. In some cases, the orphan indi­cations represented tens, hundreds, or thousands of patients. In other cases, the numbers bumped against the upper limit of the act that required a careful parsing of a disease condition definition to qualify as an Orphan Product. 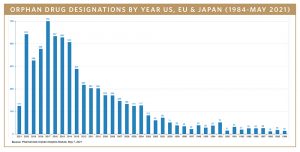 The Orphan Act spawned two distinct business strategies. The first was the tradi­tional Pharma approach of identifying un­dertreated conditions and finding or discovering molecules and treatment strategies that could positively impact these conditions. This was not unlike the strategy used historically for the development of new treatments but with the commercial incentives of the Orphan Drug Acts.

A second strategy involved finding molecules in use for Orphan indications but not formally approved for these indi­cations. This approach carried little risk given the historical experience and, in many cases, required very little clinical in­vestment. Often, the majority of expenses and effort was related to collating the pub­lished information, arranging GMP man­ufacture, and drafting the filings. Many products required very limited clinical trials or just the promise to conduct trials post approval. This led to abuse by a number of companies. The more egregious exam­ples included KV Pharma and Makena (hy­droxyprogesterone caproate) for preterm birth, Turing Pharmaceuticals and Dara­prim (pyrimethamine) for toxoplasmosis, and Catalyst Pharmaceuticals and Fir­dapse (amifampridine) for Lambert-Eaton Myasthenic Syndrome. In these cases, product prices were increased by hundreds and thousands of percent with little obvi­ous benefit or product investment.

The real attraction of developing products for orphan indications lay in the pricing flexibility it offered. Treating pa­tients for a couple of thousand dollars per year was attractive for conditions like hy­perlipidemia and depression in which treatment was often chronic and there were millions of potential patients. When the populations decreased for more spe­cialty indications like multiple sclerosis, a product with an annual price of $50,000 could still hit the blockbuster mark with only 20,000 treated patients.

With Orphan Products, the available populations dropped by a factor of a hun­dred or even a thousand. The solution was to raise prices even further. Annual prices for these therapies quickly rose to $100,000, $500,000, and more. With no alternatives, the various payors, in the face of patient advocacy group pressure and with some reluctance, accepted the bar­gain rationalizing that these premium prices were offset to a large extent by the savings realized with the generics used for the large-volume indications.

The concept of building fences has been a core strategy for pharmaceutical product development. The industry’s in­vestment in biologics is not only a reflec­tion of their therapeutic potential but also the significant regulatory exclusivity they provide, the regulatory hurdles to inter­changeability, and the myriad of process patents involved in their production. This has provided some multibillion-dollar bi­ologics with exclusivity that exceeds 20 years, a period of exclusivity that small molecule products developers rarely, if ever, enjoyed.

Layer on the benefits of Orphan Drug legislation, and it is easy to understand why the industry has embraced biologics and orphan drugs. This partly explains the investment in gene and cell therapy prod­ucts, which provide even more potential layers of patent protection and often the benefit of Orphan Drug incentives. But these new markets and products are still candidates for seesaw analysis, albeit on new seesaws and playgrounds.

The fundamental ESCP process, Effi­cacy, Safety, Convenience, and Pricing, outlined in this, and the previous three ar­ticles, provides an intuitive approach to es­timating pharmaceutical product opportunity.1,2,3 Applying these concepts can be summarized in the following four steps:

Step 1 – Identify the playground your prod­uct will be competing in. Put your buckets on the seesaw and see how they stack up against the competition. Identify your strengths and weaknesses and decide if they can be improved. If you aren’t com­petitive, consider moving to the next step.

Step 2 – Identify other playgrounds where you might be more competitive. Is there a therapeutic opportunity that needs its own playground? Can you build it?

Step 3 – Repeat Steps 1 and 2 on a regular schedule as you get more information about your product and the market. Things change.
Step 4 – When you find your playground and seesaw, start building fences. Strong fences are keys to successful products.

For most companies and products, the challenge will be to design and de­velop a product that can compete effec­tively on an existing seesaw. Creating new playgrounds or seesaws is challenging, ex­pensive, and risky, but can offer the great­est opportunity.

One final note about the ESCP process. It is not a substitute for a rigorous assessment of the therapeutic and market opportunity. The ESCP process can help guide companies at the earlier stages of product development, especially smaller companies that have limited resources and expertise. Too many companies do the hard work of bringing a product through to approval only to find the market isn’t in­terested. Ready-Aim-Fire fire provides con­sistently better results than Ready-Fire-Aim.

Going forward, Drug Development & Delivery will be hosting a series of articles on its homepage and newsletters that applies these concepts to past, current, and pipeline products – a Playground Faceoff.