Whether in the development of new drug products and generics or when repurposing existing drugs, the importance of packaging should never be underestimated. An understanding of the materials involved and an awareness of their compatibility is essential to achieve a secure, hospitable environment that pro­tects a drug until it needs to be used.

The primary container, which is in direct contact with the drug product, plays a critical role in preserving the drug’s integrity from the initial point of production through to packaging, distribution, short- or long-term storage, and the moment at which it is ad­ministered. Any failure associated with the primary container has the potential to result in serious adverse effects for the patient or the healthcare practitioner, which, aside from the human impact, can have significant financial implications for the drug manufac­turer.

One of the key functions of the primary container is to main­tain closure integrity during the whole life cycle of a drug product. In the case of glass vials – the most common type of primary con­tainer for injectable drugs – a key requirement in achieving this closure integrity is the need for seamless compatibility between the glass vial and the rubber stopper.

Even though the dimensions of vials are standardized (ISO8362-1 for manufactured from glass cane and ISO8362-4 for molded glass vials), compatibility issues can still arise, result­ing in excessive insertion forces, stoppers accidentally popping off prior to crimping, or container closure integrity being  com­promised. This can lead to significant op­erational difficulties and even present a risk to patient safety. Selecting the right stopper/vial combination, therefore, is an important choice that can impact both the development of the drug’s packaging as well as the filling and finishing operations.

Aptar Pharma’s expertise in this area has been developed over 50 years of col­laboration with pharma and biotech part­ners, during which time it has addressed challenges with vaccines, biotech drugs, and small molecules. PremiumCoat®, one of Aptar Pharma’s proprietary innovations, combines state-of-the art elastomer for­mulation with market-proven film-coating technology to create a highly advanced stopper solution. PremiumCoat’s unique design has been extensively tested in con­junction with a leading glass supplier to demonstrate compatibility with standard ISO vial designs. For our pharma partners, PremiumCoat can be relied upon to de­liver swift packaging validation and regu­latory approval.

The ability to carefully control inser­tion force is a key factor in promoting op­erational efficiency and consistency. This is directly dependent on a number of vari­ables, including the dimension of the stop­per and vial, the design of the stopper’s skirt as well as the hardness of the elas­tomer. If these parameters are not opti­mized, the stopper may become difficult to insert, which may hinder the filling line ef­ficacy, or too loosely inserted, which may lead to the stopper accidentally popping off before the crimping stage.

Aptar Pharma’s expert team assessed the insertion force of PremiumCoat stop­pers on three ISO8362 standard vial neck designs (European blowback, American blowback, and non-blowback, Figure 1) after gamma ray or steam sterilization and after 24 months of aging, which corre­sponds to the product’s shelf-life. The in­sertion force was measured with a dy­namometer while inserting the stopper at a rate of 100 mm/min. The results of the average insertion force (across the aging period) are summarized in Figure 2. 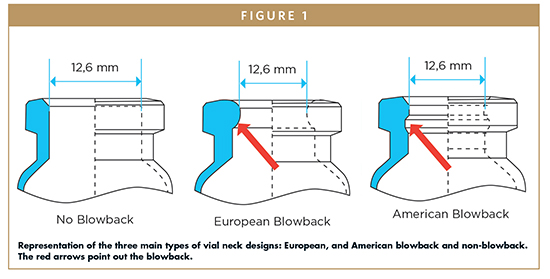 The test results show that, for each design, the sterilization method does not significantly affect the insertion force (Fig­ure 2), with European blowback and American blowback showing similar inser­tion forces. While the insertion force re­quired for the non-blowback vial is higher, it remains largely within the operational capabilities of standard filling line machin­ery. These results confirm that the design of Aptar Pharma’s PremiumCoat stopper allows for easy insertion into standard vials and that the sterilization method does not impact the insertion force required. Premi­umCoat stoppers can, therefore, con­tribute to optimizing operational efficiency and can be sterilized with either steam or gamma methods, without impacting machinability. 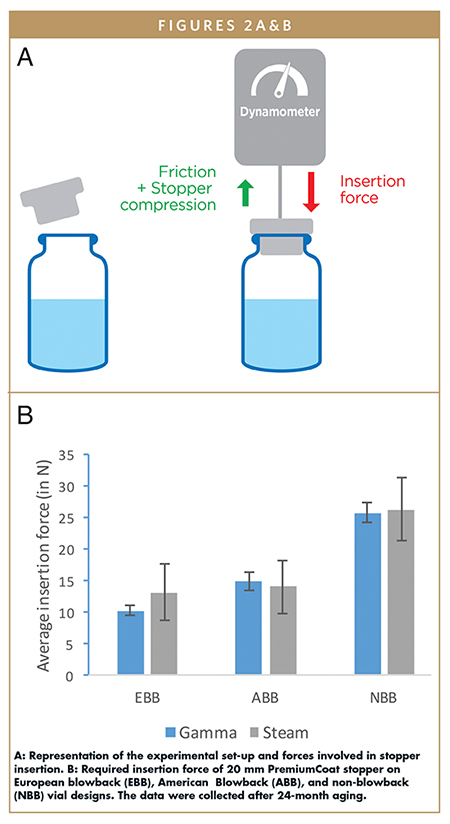 The only way to avoid pop-off issues is to test the compatibility of the vial with the stopper. Packaging companies, seek­ing to further limit the risk of pop-off, have also developed specific “blowback” de­signs for vials and stoppers. The blowback forms a protuberance and/or notch in the neck of the vial (Figure 1) against which the stopper pushes, generating a mechan­ical force working against pop-off. While specific stopper designs have been devel­oped to work exclusively with blowback vials, non-specific designs can offer similar levels of performance and work equally well with both standard and blowback vials.

Aptar Pharma’s technical teams eval­uated how the shape of the PremiumCoat film-coated stopper contributes to reduc­ing the risk of pop-off when used with three standard vial designs. The assess­ment compared the impact of gamma ray and steam sterilization, with data collected after 24 months of aging. Because no pop-off could be observed in normal con­ditions (atmospheric pressure), the experi­mental setting simulated a worst-case scenario by gradually inducing a pressure difference that would favor pop-off events. The results are shown in Figure 3.

The results shown in Figure 3 indicate that at 0.2 bar of vacuum outside the vial, which already represents an abnormal scenario because the pressure difference is pushing the cap out of the vial’s neck, no pop-off event was observed regardless of the sterilization method. When the vac­uum is further increased, the steam-steril­ized stoppers did not suffer from pop-off. For the gamma-sterilized stoppers, only one pop-off was observed for the blow­back vial designs and none for the non-blowback design. 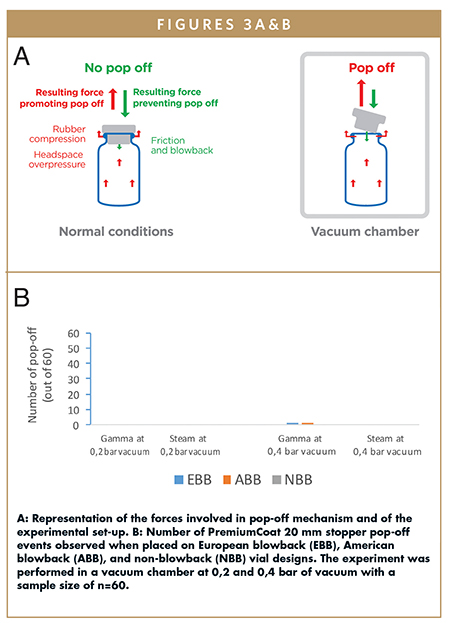 These results demonstrate that, even in sub-optimal conditions in which a de­pression is working toward increasing the risk of pop-off, Aptar Pharma’s Premium­Coat stoppers remained tightly secured on the neck of the vials. As such, regardless of the sterilization method used or the vial’s design, PremiumCoat stoppers would maintain the integrity of the drug product on filling lines.

Once inserted into the neck of the vial and secured in place with aluminium crimping, the stopper plays a key role in ensuring the container remains tightly closed and preventing any exchanges with the outside environment. This container closure integrity is essential for the conser­vation of the drug and preventing contam­ination thus, ensuring patient safety.

Aptar Pharma experts evaluated the ability of PremiumCoat stoppers to main­tain container closure integrity. The three different vial designs were stoppered under partial vacuum, and the inner pres­sure of the vial was measured for up to 1 year to monitor the increase. Though this strategy represents an extreme case compared with a situation in which the vial’s inner pressure is closer to atmospheric pressure, it provides the means to identify any potential defects in container closure integrity. Similar experiments were repeated to evaluate the impact of the sterilization method on container closure in­tegrity.

The results shown in Figure 4 indicate that, even when the stopper has reached the end of its shelf life (2 years of aging) and regardless of the neck design or the sterilization method, the vial pressure increased by less than 10 Torr over 1 year. This dif­ferential corresponds to less than 1.5% of the total pressure dif­ference (675 Torr) between the outside (760 Torr) and inside (85 Torr) of the vial, and could be attributed to the natural perme­ability of Bromobutyl elastomer. Experience tells us that significant leaks result in a fast increase of the inner pressure of the flask (several hundred Torr) within hours or days.

In demonstrating its efficiency at maintaining container clo­sure integrity over the product life cycle and independently of the sterilization method chosen, it can be concluded that Aptar Pharma’s PremiumCoat is a proven, versatile solution for enhanc­ing the protection of a drug during storage.

Across these extensive testing strategies, Aptar Pharma’s Pre­miumCoat proved to be compatible with the three main vial stan­dards and the two main sterilization methods. In all situations, PremiumCoat was found to be an efficient and reliable solution for pharma partners by: 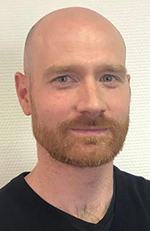 Sébastien Cordier is the Technical Product Manager for PremiumCoat projects at Aptar Pharma’s Injectables division. A graduate of MINES ParisTech and EDHEC Business School in France, he first spent over 15 years in the automotive industry, where he developed a strong expertise in plastics and elastomers, before joining Aptar Pharma in 2020. In his current role as Technical Product Manager at Aptar Pharma, he is responsible for the PremiumCoat platform of vial stoppers and syringe plungers, and is dedicated to supporting customer development projects involving coated elastomeric solutions. 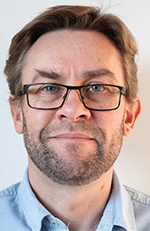 Bruno Morchain is Manager of the Technical Center in Villepinte, France, for Aptar Pharma’s Injectables division. A graduate in Mechanical Engineering from the University of Technology of Compiègne, he has over 18 years of experience in the pharmaceutical industry. He joined Aptar Pharma in 2012 as a Technical Support Engineer, where he was in charge of supporting customers on elastomeric primary packaging selection, validation, filing, and use during the product life cycle. In 2018, he became Technical Center Manager, where he leads a technical team involved in developing new products, evaluating their performance and conducting studies to support customers and their projects. 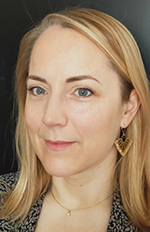 Estelle Verger is the Business Development Senior Manager for PremiumCoat-coated solutions for Aptar Pharma’s Injectables division, and is responsible for the growth of the PremiumCoat platform in the global injectable market. A graduate from ESSEC Business School and Fachhochschule Dortmund, with a Masters degree in International Business Management, she joined Aptar Pharma in 2011 as a Sales Manager, Injectables. She then moved to Aptar Pharma’s Consumer Healthcare division as a Product Manager, where she was responsible for Airless Dispensing Solutions for pharmaceutical applications for a number of years, before returning to the Aptar Pharma Injectables division in 2020.