Understanding hospital and care centers’ unmet needs is crucial for providing them with impactful solutions. In the healthcare setting, patient safety concerns exist across the entire drug delivery spectrum. Specifically, in an acute care setting where decisions are often made quickly or under stress, error rates can be at their highest.1 These errors result, cutting corners due to resource constraints, and/or an inherent medical product failure. Collectively, drug delivery mistakes create challenges in maintaining optimal patient safety, healthcare worker safety, and can increase clinical operating costs. The following discusses how differences in primary container options for injectable drugs can add value by offering hospitals and care centers configurations that address universal pain points.

Reducing medical errors, such as adverse drug events (ADEs), is a goal for the entire healthcare ecosystem. Currently, nearly 5% of hospitalized patients experience a drug-related ADE.2 Of these, injection-related ADEs alone cause between $2.7 to $5.1 billion in preventable annual costs to US healthcare payers. On average, this leads to $600,000/year in extra costs for each hospital in the US, with an additional $72,000 in medical professional liability per hospital.3 The highest error rates have been reported in the administration of intravenous medications due to their higher complexity, which studies suggest could affect ~50% of the injections given.1 These drug administration errors are dangerous and costly. Those that are related to administration errors could be limited in the case of injectable drugs due to primary drug containers that improve workflow, decrease contamination risk, and reduce sharps exposure.

VIAL REUSE IS A RISKY, BUT COMMON PRACTICE4

Syringe, vial, or ampule reuse is an existing, risky injection practice that can lead to contamination. For example, a class action lawsuit was settled in 2012 against several endoscopy clinics in Nevada because they were cross-contaminating patients with Hepatitis C. The cause of the issue was found to be linked to the reuse of vials between patients.5 The two drug manufacturers supplying the drug involved had also been considered liable as it was argued that the large size of the vials of the drug induced a reuse, while the warnings on the vials and on packaging inserts were deemed inadequate.4 Data from the Netherlands suggests that 9%-22% of their acute infusions contain some level of microbial contamination, 1% to 3% of these resulting in infections and increased hospital stays.6 The study showed that using PFS instead of vials reduced the contamination risk from 9%-22% to 4%.6 Despite the risks associated with reuse, a 2017 report showed that >50% of surveyed nurses admit to reusing multidose vials between patients, and almost 25% admit using the same needle to re-enter the bottle for the same patient. Also reported is that in an oncology setting, about 20% of oncologists accept the practice of reusing vials, bottles, and bags between patients.7 Similarly, a study focused on vial reuse in an anesthesia setting showed that about 80% of vials for an imaging agent were reused between patients.8 In contrast, the same study showed that the re-use went down to less than 1% when the drug was supplied to the anesthesiologist in a PFS format (Figure 1). These are clear examples in which providing medicines in the most “ready-to-administer” form can help reduce vial/syringe use between patients, decrease cross-contamination, and improve safety. 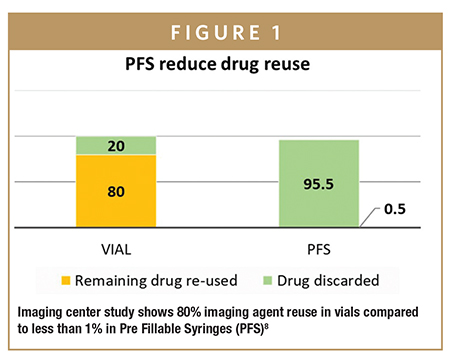 Drug dosage preparation mistakes with a syringe and vial/ampule are all too common. These can occur from preparing the wrong medicine or the wrong dose.6 While some have minimal effects, critical dosing errors can cause severe problems and even death. A 2015 study looked at total dosing error rates in vials compared to PFS (Figure 2).9 They found that 22% of vial-prepared doses resulted in at least one dosing error – of the 22% error rate, two-thirds were critical errors of either severely over or underdosing the patient. In contrast, only 4% of PFS-based syringes resulted in a dosing error event, and none of those were considered critical errors. Through the use of prefilled syringes (PFS) instead of vials, the hospital was able to show a complete elimination of critical errors and significant reduction in non-critical errors. Also, on the safety side, a 2016 meta-analysis of 46 studies concluded that healthcare worker needle-stick injuries were significantly reduced when PFS were used instead of vials and ampules. PFS solutions are shown to be safer to use for both patient and healthcare workers. 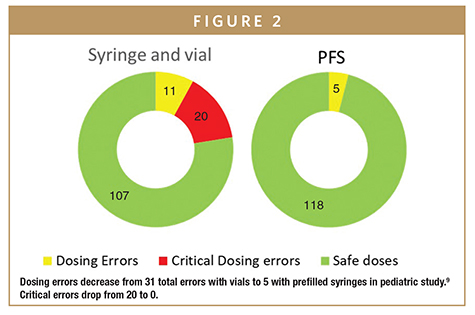 Like all businesses, hospitals try to reduce costs as much as possible. Labor costs and product waste are two areas where the right drug delivery product can impact their bottom line. For example, patients in medical and surgical units receive an average of 10 injections daily.10 PFS products have been shown to significantly reduce preparation and administration time (Figure 3).11 In an average 150-bed hospital, if 10 injections daily are given to each patient using PFS instead of vials/ampules, the hospital could save 14,600 hours yearly, or $420,000 in labor costs.

Similarly, a 2016 study of drug usage in an anesthesia setting showed that drug waste from discarded vial-based drugs costs institutions around $200,000 a year.12 This cost was eliminated through the use of pre-packaged, PFS. Similarly, a French university obstetrical unit study compared drug waste between ampules and PFS. They discovered that switching to PFS for one of their common drugs resulted in a 17% decrease in drug waste, or savings of $0.55 per patient.13 Lastly, a budget impact analysis was conducted of French hospitals comparing PFS to standard delivery methods, considering medication error and drug waste. Looking only at one drug, atropine, PFS use was modeled to yield a net one-year budget saving of $5.76 million. They concluded that even though PFS were more expensive up front, their use would result in significant budget savings in both medical errors and drugs waste.14 As hospitals start to calculate the potential savings PFS can bring, they will look to drug companies that offer these convenient primary containers when they are ready to make a purchase. 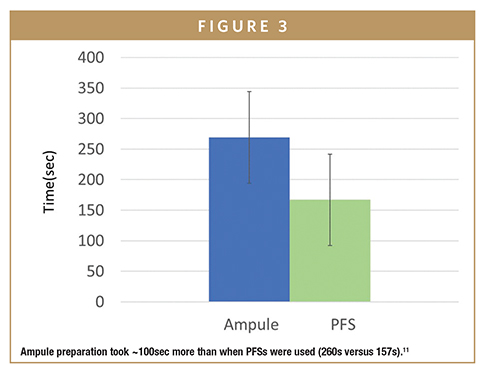 Finally, there are shared pains between drug manufacturers and their customers. Several product recalls have been linked to vials in the past caused by flaws inherent in the vial manufacturing process.15 Vial glass can delaminate and cause glass particles to appear, reducing glass durability and contaminating the drug.16 These recalls are costly and inconvenient for both drug manufacturers and their customers. The PFS manufacturing process is different than for vials, and results in improved glass durability. In fact, PFS outperform glass vials for most test conditions and perform equivalently for others.16 One of those additional vital tests looks at leaching chemicals. Chemicals leaching into or out of the primary container can change the makeup of the drug inside. The inner surface of PFS were found to have lower chemical leaching than glass vials.17 Another shared cost for customers and suppliers is the need to over fill vials with drug. This is done because it is impossible to withdraw 100% of a dose from a vial. The cost to over fill is either absorbed by the drug company or passed on to their customers. Switching to PFS as a primary container not only offers a more robust package, but also eliminates the need to overfill the container. 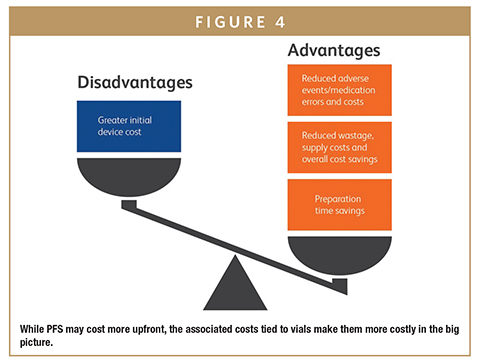 Selecting the right primary container presentation for a drug is an important decision that can directly impact customers. As the healthcare industry focuses more on safety, they will be looking for ways to reduce ADEs and needle stick injuries. When hospitals look to reduce spending, they will target workstream inefficiencies and product waste. In order to continue providing optimal care, they will seek out robust devices with low likelihood of recall. Prefilled syringes have shown the ability to address all these needs (Figure 4), and now that they are available in a variety of formats up to 50mL in both highly resistant glass or advanced plastic, drug companies have many options to meet the needs of acute care hospitals and care centers. 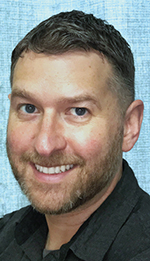 Alfred Harvey started his career with BD in 2001 as a Research Assistant working in early stage R&D. With an initial focus on improving parenteral delivery systems, he took on greater roles, eventually managing device teams in a variety of areas, such as oncology, diabetes, rheumatoid arthritis, and IV therapies. At each stage, he brought in greater influence from his Health Economics background and drove initiatives of delivering greater customer value and improved patient outcomes. In 2017, he took on his current role as Associate Director of Health Economics and Outcomes Research for BD’s Medical, Pharmaceutical Systems division, where he is helping lead the strategic focus in prefilled, self-administration, and safety systems. He earned his MBA from Stetson University and his Masters in Pharmacy-Pharmaceutical Outcomes and Policy from the University of Florida.