Central nervous system (CNS) disorders affect as many as 1.5 billion people worldwide and account for an economic bur­den of more than $2 trillion in the EU and US combined and sig­nificant areas of unmet need in global health.1,2 In recent years, many life sciences companies have pursued clinical development of CNS drugs, but these development programs statistically often have considerably lower clinical success rates compared to drugs in non-CNS indications.3 One critical factor affecting the success of development programs targeting treatments for CNS disorders is challenges with drug brain delivery.4

The largest obstacle to effective drug brain delivery is the blood brain barrier (BBB), a network of specialized capillary en­dothelial cells that protect the brain from harmful substances while facilitating access to the essential nutrients to support proper function.5 While peripheral capillaries in the body allow relatively free exchange of substances between cells and tissues, the en­dothelial cells that form the BBB strictly regulate the transport of substances into the brain using both physical and metabolic bar­riers.6 These barriers regulate brain homeostasis (the balance of electrolytes, glucose, nucleosides, and amino acids) through multiple efflux and uptake transporters, metabolic enzymes, low pinocytotic activity, and low paracellular permeability.

In biomedical research to date, many potentially effective drugs have been unable to target and transport across the BBB safely and effectively. To design drugs able to reach the CNS at therapeutic concentrations, developers can consider three differ­ent approaches: invasive, pharmacological, and physiological. Invasive approaches often have limited applications and may not be a viable option for many needs, including treatment of older patients requiring chronic medications. Pharmacological methods use factors including molecular size (< 500 Dalton), charge (low hydrogen bonding capabilities), and lipophilicity (the ability of a chemical to dissolve in fats, oils, lipids and non-polar solvents) to exploit the natural properties of the BBB. Drugs designed based on this approach are generally limited in their ability to deliver diverse chemical or biological entities across the intrinsically im­permeable structure of the BBB.

As recent scientific advances have helped researchers gain a better understanding of the cellular biology at the blood-brain interface, more drug developers are pursuing a physiological ap­proach to deliver therapeutic agents across the BBB, which can help minimize or avoid the limitations of invasive or pharmaco­logical approaches. With this approach, drugs can be modified to take advantage of native BBB nutrient transport systems or be joined with conjugates able to target receptors expressed at the BBB, allowing a drug to “piggy-back” across the BBB through the process of receptor-mediated transcytosis.7 Despite recent ad­vances in research, most drugs, including small molecules, pro­teins, and peptides based on a physiological delivery approach, are unable to efficiently cross the BBB.

When developing therapies for CNS diseases, drug delivery must be targeted to the appropriate brain cells and intracellular compartment associated with a disease. This precision helps to ensure that a drug is delivered to affected cells while reducing the risk of toxicity. Given the many limitations of traditional drug de­livery mechanisms, research efforts have recently focused on de­velopment of new strategies to more effectively deliver drugs to the CNS through the BBB.

THE MECHANISM OF ACTION OF THE XB3 PLATFORM

Research led by Bioasis has led to de­velopment of a platform technology called xB3 that can transport molecules across the BBB via receptor-mediated transcytosis. In this process, molecules attach to receptors on the surface of endothelial cells forming the BBB. The receptors pull the molecules by vesicular transport through the cells, gaining access to the brain.

Formerly called the transcend-pep­tide, xB3 is a small 12 amino-acid peptide that works with a wide variety of payload types, including antibodies, enzymes, small interfering RNA (siRNA) and small molecules.8-10 The peptide was derived from xB3 full-length (also known as melan­otransferrin, MTf), an endogenous protein that is found at very low concentrations in the blood and has been shown to actively transcytose across the BBB at a transport rate 10 to 15 times higher than that of the proteins transferrin and lactoferrin.11 The xB3 platform technology traverses the BBB via a process that involves the low-density lipoprotein-related protein 1 (LRP1), which offers significant advantages as a trans­port system given its broad expression throughout the CNS, ability to recognize a wide range of structurally and functionally diverse ligands, and rapid endocytosis rate. High affinity receptor binding does not necessarily translate into high trans­port efficiency, as seen with transferrin-transferrin receptor (Tf-TfR) binding where most of the cargo remains associated to the vasculature and cannot detach from the TfR and remain associated with the BBB. By contrast, lower TfR-ligand binding affinity has resulted in about 50% higher ligand release from the BBB into the brain.12 The lower affinity, high-capacity LRP1 receptor binding with xB3 thus could present a valuable alternative in targeting drugs to the brain. 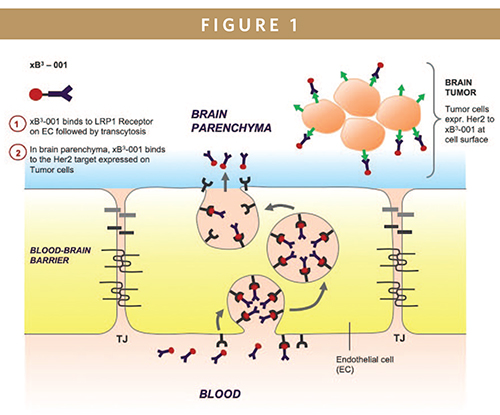 IntraSchematic representation of the transport of xB3-001 across the BBB. xB3 fusion molecules such as xB3-001, introduced into the blood circulation via intravenous injection, bind to LRP1 receptors expressed on the luminal surface (blood side) of the brain capillary endothelium through interaction with the xB3 peptide portion of the molecule for transcytosis across the BBB. Upon reaching the abluminal surface (brain side) of the BBB, xB3-001 is released from the receptor. Subsequently, the high affinity between Herceptin (trastuzumab) and Her2 targets facilitates the binding of xB3-001 to Her2 targets expressed on the surface of tumor cells in the brain, thereby suppressing cancer cell growth, proliferation and survival. (Photo credit: Dr. Reinhard Gabathuler, Dr. Siti Yusof, and Bioasis Technologies Inc.)

Clinically, LRP1 has been associated with neurodegenerative diseases through its role in importing cholesterol into neu­rons to maintain proper cell function. It has also been implicated in local catabo­lism of amyloid beta protein through en­docytosis in neurons, and LRP1 in astrocytes plays a critical role in clearance of amyloid beta protein from the brain. Overexpression of LRP1 has been reported in several types of brain tumors, including brain metastasis and glioblastoma. Given the distribution of LRP1 on the BBB’s en­dothelial cell surfaces, neuronal LRP1 lo­calization within the CNS, and the upregulation of LRP1 in key target tissues in many neurodegenerative diseases, LRP1 is likely involved in promoting dual target­ing of both delivery across the BBB and target engagement of specific diseased areas, such as tumors and metastases. Moreover, with the endogenous origin of xB3, immune hypersensitivity and elimina­tion by neutralizing antibodies are likely to be minimized after repeated treatment.

VALIDATION OF XB3 IN EFFECTIVELY PENETRATING THE BRAIN

In a range of preclinical studies, the xB3 peptide has been shown to help ther­apeutics effectively penetrate the BBB and reach target areas within the brain. Intra venous administration can also provide a relatively non-invasive route for efficacious delivery of xB3-modified therapeutics. In one example, preclinical disease models showed that intravenous treatment of HER2+ breast cancer-related brain metas­tases with an xB3 version of herceptin (xB3-001) led to a 68% reduction in the number of brain metastases. The data also showed that the remaining tumors were 46% smaller compared to the control groups, while treatment with herceptin alone had minimal to no effect on either the number or size of the brain metastases.8 In addi­tion, xB3-001 showed significantly higher brain tissue penetration with brain/blood concentration ratios that were 10 to 225 times higher than corresponding ratios for the group treated only with herceptin. Pref­erential uptake into brain metastases com­pared to normal brain tissue distal to metastatic lesions were also observed.

An independent study conducted by MedImmune research group has also demonstrated that xB3 greatly increased the transport of an antibody payload to the brain with a systemic profile similar to the antibody itself and prolonged brain expo­sure, with peak exposure of more than 4 to 6% (compared to a peak of <1% fol­lowing treatment with the antibody alone).9 ­

In a separate neuropathic pain mouse model, systemic administration of xB3-IL1RA (interleukin-1 receptor antagonist) fusion protein reversed induced mechani­cal hyperalgesia (enhanced sensitivity to pain), which was only previously achieved via intrathecal administration of IL-1RA.9 In another example, in a preclinical model of Hunter syndrome (MPS II, a lysosomal storage disease) where xB3 was fused with the enzyme iduronate-2-sulfatase (IDS), the compound appeared fully active and effective in the periphery areas of the brain at levels equivalent to treatment with re­combinant IDS (Elaprase®, idursulfase). The xB3-IDS fusion protein was able to re­duce hallmarks of Hunter syndrome in the brain, including cellular vacuolation (the formation of vacuoles) in brain cells and buildup of lysosomes and heparan sulfate in the brain.

The xB3 platform technology has also been shown preclinically to deliver small molecules (eg, Adriamycine®, doxorubicin) to the brain, thereby resulting in an in­crease in survival in mice with intracranial glioma.10

Preclinical data have also shown that in a mouse ischemic stroke model pre-treatment with a combination of xB3-siRNA led to a significant reduction in brain infarct volume and an improvement in neurological deficit.

Through continued research and re­finement, the xB3 platform technology has transitioned from a large naturally occur­ring human protein to its core functional 12 amino-acid peptide. Preclinical studies have demonstrated that this advanced technology outperforms TfR-based trans­port in both efficiency and versatility with respect to the types and sizes of payloads that can be delivered to the CNS. Devel­opment of the xB3 peptide as the propri­etary vector for brain transport has been focused on three primary disease areas: brain metastases, glioblastomas, and neu­rodegenerative diseases.

The xB3 platform has the potential to support a broad range of development programs targeting effective transport of therapeutic agents through the BBB. Re­cently, Bioasis announced partnerships with Prothena Biosciences and Chiesi Global Rare Diseases to support their clin­ical research efforts. The xB3 peptide has also been shown to penetrate the lym­phatic system, demonstrating its potential applications in non-CNS indications.

Bioasis is also advancing its own in­ternal development programs focused on orphan drug indications, including brain cancers and rare genetic neurodegenera­tive diseases, such as lysosomal storage disorders (LSDs) where proof-of-concept for approved medications exists and where there is potential for more rapid develop­ment and (fast track) approval using the xB3 peptide. Our most advanced program, xB3-001, targets brain metastases, with the potential for rapid human proof-of-con­cept regarding payload brain penetration, target engagement and efficacy. Following a positive response from the FDA to pre-IND submission, Bioasis is focused on ad­vancing the pre-clinical development of xB3-001 toward IND filing and has initi­ated pilot scale manufacturing.

In addition to the significant unmet needs in the rare disease sector, more pa­tients will develop brain cancer or various neurodegenerative diseases as the popu­lation ages. Demand for new and more advanced CNS therapies will continue to expand, but the ability to meet this de­mand with new and proven safe and ef­fective therapies will be limited if therapies are not able to penetrate the BBB effec­tively, and if they cannot be produced cost effectively. As a brain delivery vector, the xB3 platform technology represents a promising alternative for treating CNS dis­eases. By transforming existing or novel non-brain penetrating therapeutics into new, more efficacious agents that can cross the BBB, this platform has the poten­tial to support development of treatments for CNS diseases that can treat thousands of patients in the years ahead. 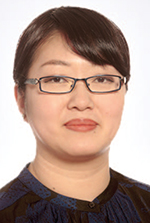 Mei Mei Tian is a Vice President and the Head of External Research at Bioasis Technologies, Inc. Dr. Tian has more than 15 years of experience working on melanotransferrin-related research in both academia and biotech. At the University of British Columbia, she investigated the role of melanotransferrin in melanoma malignancy, as well as mechanisms involved in melanotransferrin uptake in cells. Since joining the Bioasis team in 2012, she has been a significant contributor in the early development and continued expansion of our proprietary blood-brain barrier technology, xB3. With her oncology and neurology background, she is a committed and driven individual with a passion for the success of our platform. Dr. Tian earned her PhD in Microbiology and Immunology from the University of British Columbia.