Biologics are high-price and high-value drugs that have made significant differences to patients’ quality of life worldwide, both as prophylactics and therapeutics; however, they can be prone to contamination with particles that can cause issues for patients. While product safety and contamination is important for any drugs, it is particularly significant in biologics, which tend to be prescribed to people with chronic conditions or serious diseases.

Biologics, which can be chemically synthesized, derived from biological materials, or expressed using recombinant DNA technology, target the specialty pharmaceuticals market, particularly treating life-limiting disease or serious chronic disorders. They may be safer and more effective, or better targeted, than small molecules, but they are generally higher cost and more complex to develop and manufacture.

The demand for biologics is growing year on year. According to the IMS report, The Global Use of Medicines: Outlook through 2017, the market share for biologics (including biosimilars and non-original biologics) is growing, from a global share of sales of 11% in 2002 to a projected 19% to 20% in 2017. This will only continue to increase, as currently around a third of all of the projects in late-stage pharma R&D are biologics.

THE ISSUE OF PARTICULATES

Particles in biologics, which can range from protein aggregates to shards from the vial or stopper, can have an impact on a product’s stability and therefore its shelf-life. From a practical perspective, a product’s shelf-life needs to be 2 years or more, and this is particularly important for higher cost or less commonly used products. More significantly, however, the presence of particles can trigger an immune response in patients. A mild response might just be an inconvenience, but a more severe immunogenic response could be life-threatening, especially in patients already seriously ill.

These issues will have an impact on the regulatory process, with regulators requiring demonstrable limitation, control, and identification of product-related impurities. The control of particle formation may even require process changes or reformulation, which  could potentially have an impact on the product’s stability, efficacy, and safety. Because of this, changes in the process could mean that the regulators require additional method validation as well as comparability and stability studies.

Drug development is already a costly business, in some cases topping a billion dollars, and these additional changes and steps could delay the time to a return on investment, as well as having an impact on the product’s patent life.

I SPY: SPOTTING & IDENTIFYING THE PARTICLES

Particles identified during the biologics production process can be divided up into two types, non-proteinaceous and proteinaceous, and they may be intrinsic (arising from the product, the formulation, the container, or the delivery device) or extrinsic (introduced into the formulation from the environment during manufacturing). Non-proteinaceous particles include shards from vial closures, fibres shed from filters, delaminated flakes from plastic packaging, and splinters of glass or metal from processing or packaging steps. Tiny drops of silicone oil, used in the lubrication of moving parts in delivery devices, can also form non-proteinaceous contaminants.

Companies can use a range of different techniques to track down particles depending on their size, from SEC-MALS (size-exclusion chromatography with multi-angle static light scattering detection) for particles as small as 1 nm, through to visual inspection for particles of 100 μm and upward (Figure 1). 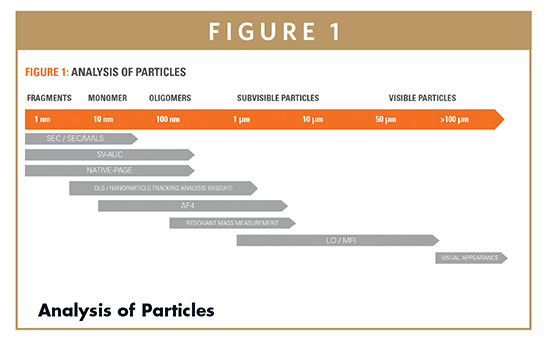 Putting steps in place to control particle formulation as early as possible is vital, as later issues are likely to require more significant changes, so therefore will have more impact on costs and necessitate longer delays. It is also worth bearing in mind that any changes after the formulation step are likely to mean further reformulation steps, further increasing costs and delays.

There are a number of points in the production development process in which companies can intervene to reduce the risk of particulate formation (Figure 2). The orange text indicates points at which particle formation is more likely, so these should be carefully watched in the product design and the development of the manufacturing process. The product needs to be monitored at all steps, both for the number and the type of particles. 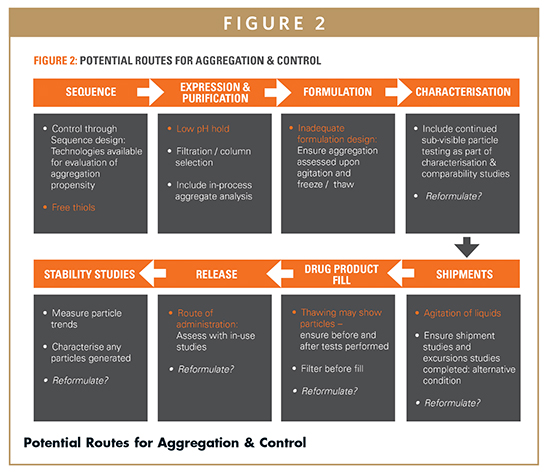 The earliest step is designing the sequence and evaluating its risk for aggregation based on its structure and conformation, before the molecule has even been expressed. Key issues to look out for are free thiols and exposed internal thiols, which may lead to covalent (irreversible) bonding within and between proteins. This misfolding and binding can create a nucleus for an aggregate formation, so making even slight changes at this point could have a significant and positive impact on the likelihood of particle formation. This assessment can happen right at the very beginning of drug discovery and development.

Once the biologic has been expressed, steps in the purification process can trigger aggregation, for example, the inclusion of shreds of filters shed during UF/DF filtration, or conformation changes resulting from the need for pH reduction to inactivate viruses. In-process aggregate analysis allows monitoring of particulate formation on an ongoing basis, pointing to any changes needed in the process.

The formulation step ensures that the conformation of the biologic API is stabilized, to retain its activity and reduce the development of particulates. Biologics can be vulnerable to being broken down in the body, particularly in the gut, so they need to be formulated appropriately. Because of the nature of the molecule, it can also be affected by temperature, pressure, and agitation, and thus the formulation needs to ensure stability of the molecule in storage and transport, as well as protecting it from damage during freezing and thawing. Biologics are usually administered by injection or infusion, so the formulation also has to be appropriate for the device.

Not only do all the characteristics of the drug and formulation need to be assessed in relation to particle aggregation, the product also needs to be formulated correctly to be patient- and physician-friendly, and to ensure that the drug gets to the right place, at the time, and in the right concentration.

Once the drug is formulated, the next step in the evaluation process is to see how well it will cope with the conditions that the finished product may experience in shipping and transport. These include rapid and sometimes extreme changes in temperature if optimum storage conditions are not available, for example, if the cold chain is broken, especially in countries with very extreme climates. If products are transported by air and are in the cargo hold, there may be changes in temperature and pressure. Finally, shipping by road, rail, or air can lead to liquid biologics being agitated for long periods of time. Testing should include simulation of these conditions for time periods equivalent to those that could occur during transport.

Biologics may be supplied frozen or freeze-dried, and so will need to be thawed or reconstituted before use. In order to check whether these steps trigger particle formation or aggregation, tests have to be carried out before and after freezing/thawing or drying/reconstitution, and reformulation steps added in if necessary.

The type of storage vessel and the route of administration can make a difference, and products need to be monitored after filling and before and after administration. Non-proteinaceous particles can arise from delivery devices and storage vials, and may be introduced during the packaging stage, for example, damage to the neck of a glass vial during filling, or delamination from poor-quality plastic stoppers or closures. The delivery device can also be a source, for example, oil used to lubricate the barrel of a syringe can create a nucleus for protein aggregation. Any analyses will need to compare the biologic alone, and in its delivery device or vial.

Monitoring for particle development does not stop at the end of the manufacturing process. Drugs need to be monitored for a period equivalent to their shelf-life, under a variety of conditions, to ensure that particles do not develop over time.

Companies that specialize in formulation can reformulate drugs that have progressed through development with good safety and efficacy, but show a propensity for particulate formulation at one of the aforementioned steps, or that have shown property changes at batch scale-up or when production has moved from one plant to another.

In this case study, an IgG1 monoclonal antibody had gone through the clinical trials, but its developer found that it tended to form particles when it was frozen and thawed, and during the shipping process. Because of the late stage of development, the project needed to be pushed through as quickly as possible, with constraints on the budget and limits on the amount of material available.

The preformulation characteristics are shown in Figure 3, comparing the original or control biologic to the degraded form after exposure to a simulation of the worst-case shipment conditions and temperature excursions. This included 24 hours agitation at ambient temperature, and three cycles of freezing and thawing, with temperatures from -20°C to +40°C. The analysis showed irreversible scrambling of the SS-bridges, but no noticeable charge-based changes. There were no significant changes to the secondary structure and only minimal changes to the tertiary. However slight the changes were, they triggered the formation of particles, the majority of which were greater than 2 μm. The findings were used to determine the best screening methods. 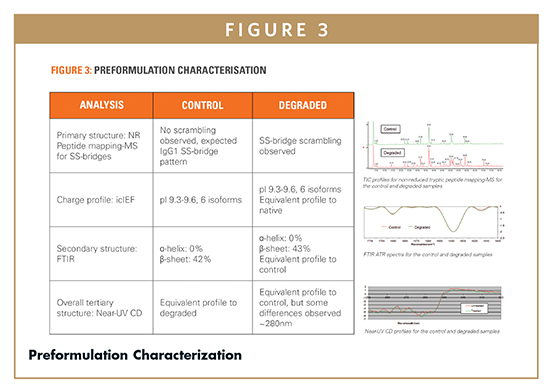 Based on these observations, a pH and excipient screen to find the optimal formulation to control aggregation was performed. The pH screen was carried out at a pH range of 3.5 to 7.5, with the samples being agitated, frozen, and thawed. The process was monitored using SE-UPLC (size exclusion ultraperformance liquid chromatography) and DLS (dynamic light scattering). Once the optimal pH was determined, a screen using a variety of excipients at different concentrations and a number of different surfactants, using a design of experiment (DoE) approach, all the time maintaining an awareness of limitations on time, budget, and sample volume was carried out. The optimum surfactants were selected for conformational stability and reduction of surface charge interaction.

From the results of the screening, a shortlist of four lead candidates was selected and assessed for conformational stability and particle count using intrinsic fluorescence and DSC (differential scanning calorimetry), particularly looking at counts of particles greater than 2 μm. The final candidate ranked top in both sets of criteria, including having the most thermally stable formulation, assessed at temperatures between 20°C and 100°C.

Traditionally, tools such as SEC and DSC have been used in formulation screening. However, in order to ensure a control of particulate counts, it is important to use the full range of tools (Figure 1) to ensure that all types and sizes of particles and aggregates, from visible to sub-visible, are all assessed and accounted for. As drug development costs and time pressures increase, speed and sensitivity are critical, meaning that highthroughput screening is becoming more important.

It is vital to assess the risk of particle formulation for all biologics, and it should be carried out as early as possible in the product’s lifecycle to help keep costs low and timelines short. But equally importantly, the levels of particulates in products will need to be monitored beyond launch to ensure patient safety as well as in clinical trials. 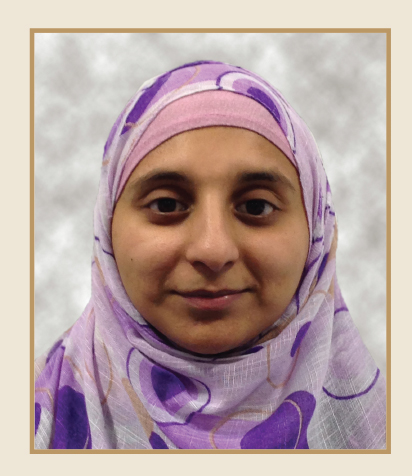 Zabin Younes earned her BSc in Medical Biochemistry from Royal Holloway University of London. She has extensive experience in the biopharmaceutical development industry – with both practical and theoretical experience in purification, formulation, assay development, characterization, assay validation, specifications definition, and stability testing. Ms. Younes has worked for small and large biotech enterprises, including MicroScience Ltd (later Emergent Biosolutions) and UCB/Celltech. Previously, she was Team Leader in Stability and Formulation at Lonza. She has built a solid foundation in stability management, stability study strategies, customer/regulatory communication, laboratory compliance, and lab management. Ms. Younes has worked with a range of biological products, such as vaccines (protein subunits, conjugates, bacterial, and viral vectors) and recombinant protein therapeutics, including monoclonal antibodies, antibody fragments (Fab’/Fc), and bi-specific molecules. She joined SGS M-Scan in August 2013 as Stability Services Manager.