Oral disintegrating tablets (ODTs) are designed to disintegrate rapidly in the mouth upon contact with saliva (= 30 seconds) and allow oral drug delivery without chewing or a need for water.1 These formulations offer increased convenience and ease of use with the potential to improve patient-dosing compliance – especially in certain patient populations (eg, pediatric, geriatric, mentally disabled, and bed-ridden patients), for which swallowing conventional solid oral dosage forms may be difficult or impossible.2 In addition to convenience and improved patient compliance, ODTs offer accurate dosing; enhanced bioavailability by greater pre-gastric drug absorption in the mouth, pharynx and esophagus, and often a better safety profile by reduced likelihood of choking or suffocation.3

The popularity of ODTs has surged in the past decade, and currently, more than 50 medicines in various cardiovascular, psychiatric, analgesics, and antihistamine indications are available as ODT formulations.3,4 Further, marketing studies have shown that greater than 50% of patients prefer ODTs compared with other solid dosage forms, and roughly 70% purchase ODTs, even though liquid and tablet formulations of a drug are also commercially available.5 This may, in part, be attributed to known ODT advantages that include portability, convenience, ease of swallowing, and a pleasant taste that often masks the bitterness of most orally bioavailable active pharmaceutical ingredients (APIs).

Not every medication is amenable for ODT formulation. Ideally, ODT formulations should not require water to swallow and will dissolve or disintegrate in the mouth. These formulations should allow high API (drug) loading, be compatible with taste-masking and other excipients, have a pleasing mouth feel, leave little or no residue in the mouth after administration, possess sufficient strength and physical properties to withstand pharmaceutical manufacturing and packaging processes, and exhibit low sensitivity to environmental factors such as temperature and humidity.

Ion exchange resins (IERs) are water-insoluble cross-linked polymers containing a salt-forming group at repeating positions on the polymer chain.7 Synthetic IERs are usually cast as porous beads with considerable external and internal pore surfaces for loading. The resins are typically spherical in shape and 0.5 to 1.0 mm in diameter. The structure of these IERs is quite porous at a molecular scale to achieve the drug loading.

Selection of an appropriate IER is largely dependent upon the exchangeable ion properties of a specific drug. When choosing an IER for the sustained-release application, two main factors must be considered: cross-linking properties and drug loading capacity.7,8 The typical range of cross-linking is 4% to 16%. For drug loading considerations, the resin acid/base strength and counter-ion selectivity are important.7,8 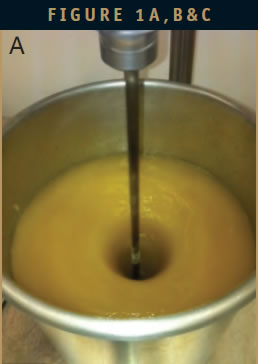 Drugs are loaded onto the resins via an exchange reaction, forming drug-resin complexes called resinates. Insoluble resinates are formed through weak ionic bonding with oppositely charged drugs so that release of a drug from a resinate does not occur at salivary pH (~ 6.7).7-9 The resins are not absorbed by the body due to their high molecular weight and water insolubility and are therefore inert; making them ideal drug delivery vehicles. To that end, ion exchange resins are used for a variety of applications in the pharmaceutical industry, such as:8,10

In the present study, a strong cation exchange resin, AmberliteTM IRP69, was used to form IER-drug resinates. Amberlite IRP69 was considered to be suitable for the model drug compound based on the drug properties. The model drug used in this study was a very bittertasting HCL salt, making it difficult to formulate in ODT formulations.

The Amberlite IRP69-drug resinates were created by mixing hydrated ionexchange resin particles and different concentrations of the model drug substance. Mixtures were stirred for 6 hours to maximize drug loading onto the IER particles. The samples were taken at 1, 2, 4, and 6 hours to investigate the drug loading. The drug loaded resins were then dried in an oven and coated with a combination of methacrylate polymers to further control the release profile by reducing the initial burst. Figure 1 shows the manufacturing process.

Formulations were developed by varying the material composition and optimizing the process parameters. Croscarmellose Sodium (Ac-di-Sol®) was used as a superdisintegrant to obtain tablet disintegration within 15 seconds. Mannitol, citric acid, and sodium bicarbonate helped to mask the taste of the bitter drug compound as well as to enhance the disintegration time along with Ac-di-Sol. Table 1 provides the details of the two formulations. The blend was then compressed using 11/32” round tooling into 250-mg tablets. Both formulations have a dose of 25 mg. The physical properties of both of the formulations are presented in Table 2. 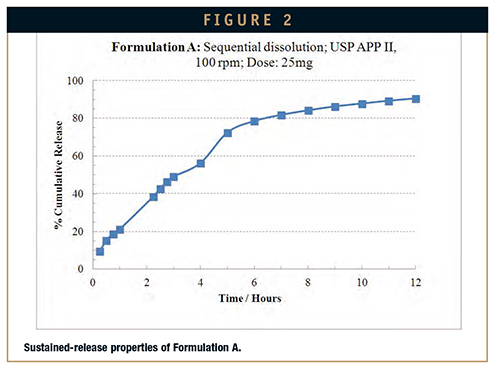 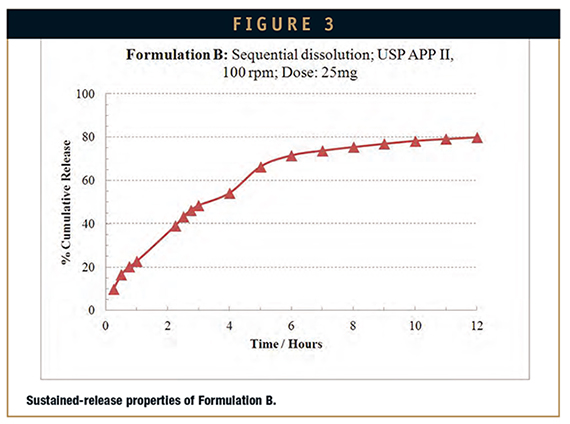 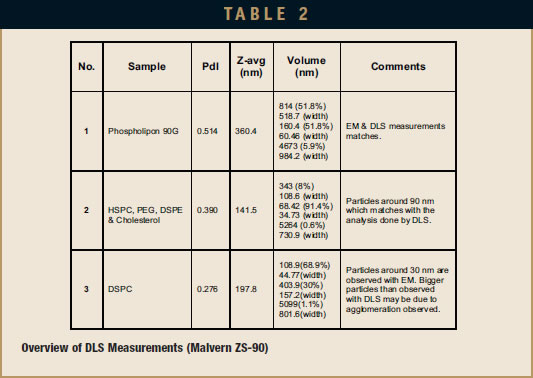 The drug formulation technique described in this article is simple and easily scalable. Because of the availability of a wide range of anionic and cationic IERs, a vast array of pharmaceutical drugs can be formulated using this technique to achieve sustained release of drug molecules.15 In addition, IERs can be used as taste-masking agents and superdisintegrants in ODT formulations.

Combining the taste-masking and sustained-release characteristics of IERs to formulate ODTs will help to improve drug dosing compliance among pediatric, geriatric, bedridden, and non-cooperative patients.16,17 Moreover, the popularity of ODTs amongst members of the general population is likely to increase because of their portability, ease of use, and convenience.

The authors would like to thank the following team members for their contributions to this research: Blaise Mwanda, Ann Lamping, Rajeshwar Thota, Ram Kasina, and Anthony Qu. 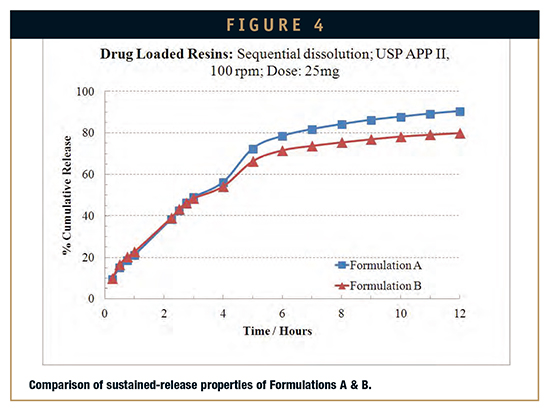 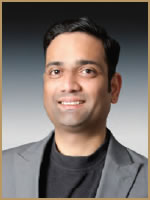 Dr. Abhijit Gokhale is a Senior Scientist (Formulations and Process Development) employed at Patheon Pharmaceuticals since May 2011. Dr. Gokhale has over 12 years of drug development experience in both academic and industrial environments. He has extensive experience in formulating pharmaceutical drugs for both controlled release as well as bioavailability improvement applications. Dr. Gokhale has authored several papers and patents in the field of nanoparticle-based drug delivery and several cutting-edge technologies used in formulations. 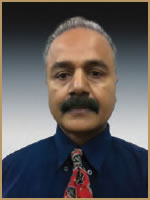