At their most basic, oral thin films (OTFs) are polymeric films intended to deliver therapeutic moieties either locally or systemically in the oral cavity or through gastrointestinal absorption. OTFs are an attractive option for drug delivery because of the advantages they offer, such as dosing flexibility and ease of administration. They are also fast-acting and can prompt drugs to enter the circulatory system directly by oromucosal and/or sublingual absorption. This avoids exposing drugs to the harsh conditions of the stomach, enabling this drug delivery system to deliver a larger proportion of active compound per dose.

Although OTFs have been available as a drug delivery system since the 1970s, their popularity has soared in recent years due to improved dosing capabilities, packaging, and film stability.1 In addition, there is growing demand from patients with trouble swallowing tablets and capsules, now thought to be 37% of the population.2 As a relatively new form of drug delivery, there are currently only about 10 OTF medications on the market, none of which are generic (Table 1).3 Despite their small number, these OTFs treat a wide range of diseases and disorders, such as migraine, schizophrenia, opioid dependence, pain, nausea, and vomiting. Considering this novel drug delivery system’s success, more drugs to treat a larger range of disease indications are likely to be adapted to oral thin films in the future. Children, the elderly, and those experiencing nausea often have trouble swallowing, and therefore stand to benefit most from drugs delivered via OTFs. Notably, the growing size of the elderly population, caused by an increase in human life expectancy, is predicted to drive the growth of the OTF market.4,5 Because the elderly are more prone to chronic illness, the demand for safe and trouble-free drug delivery methods will only increase

Due to advancements in the science behind OTF design, as well as the predicted increase in OTF market valuation, this drug delivery system is becoming more popular. Few companies have a thorough understanding of the advantages this novel drug delivery system has to offer, and few drug developers have proficiency in the methods needed to optimize OTF drug development and overcome the limitations of OTF manufacturing. Based on my experience working at Avomeen developing drugs in various delivery systems, and my expertise working with OTFs, I will provide a thorough review of the formulation and production of OTFs as well as misconceptions, advantages, and limitations of designing and producing them. 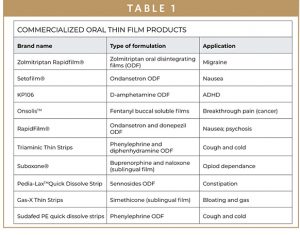 OTFs come in two major categories: oromucosal and orodispersible. Oromucosal films are placed either onto or under the tongue, or on the inside of the cheek. As mucoadhesives, they are designed to adhere to the inside of the oral cavity and release drugs slowly across the mucous membrane (ie, under the tongue or through cheek) directly into a patient’s systemic circulation. For this reason, oromucosal films are particularly fast acting, in addition to avoidance of both first-pass metabolism and degradation in the stomach’s acidic environment.

OTF formulation is based on criteria significantly distinct from that indicated for tablets and capsules. OTF formulation has more limitations than formulation of tablets and capsules. Tablets and capsules can be large or small, solid, or gelatinous. They can also carry additives that enhance stability and solubility. On the other hand, OTF formulation must be designed with the knowledge that the end product will be a small polymeric film. OTFs require unique considerations of dimension and thickness of the film, drug/polymer ratio, viscosity, flexibility, and tensile strength. In addition to basic physical qualities, formulation decisions for OTFs are also tailored to a drug’s physiochemical properties, the drug amount needed, and the OTF release type desired.

Films can be characterized in more detail based on a wide range of organoleptic, mechanical, and performance attributes. Organoleptic attributes include qualities that appeal to the senses, such as size, transparency, color, and taste. These qualities do not affect a drug’s performance but can affect the patient’s acceptance of the OTF. Mechanical properties, such as elongation at break, tear resistance, and folding endurance, are of vital importance to the manufacturing process, as well as to the patient’s handling and transportation of the OTF. These properties vary from film to film based on the specific composition. Finally, performance attributes, such as an OTF’s uniformity, impurity, and disintegration/dissolution rates would indicate how a drug will perform in vivo. In addition to performance testing, drug content uniformity, purity, and stability evaluation are critical during development and manufacturing process. OTF manufacturing can be achieved through a variety of methods, with solvent casting and hot metal extrusion being some of the most widely used; however, many of these methods call for harmful solvents. For this reason, a new method called aqueous slurry casting is gaining in popularity, as it does not require the use of such chemicals.

One of the most common misunderstandings about OTFs is the difference between disintegration and dissolution. By definition, dissolution occurs when a drug goes into solution (eg, in saliva), whereas disintegration occurs when a film breaks into pieces that disperse in the oral cavity for easier swallowing. Another common misconception is that OTFs can only carry aqueous soluble drugs. On the contrary, recent work has demonstrated the incorporation of poorly water-soluble BCS Class II/IV drugs into orally disintegrating films that dissolve in the GI tract.6-9 In contrast, aqueous soluble drugs of class BCS I/III are incorporated into films with relative ease. These tend to disintegrate and dissolve simultaneously in the oral cavity. Thus, the solubility of a drug dictates its performance, including where it in the body it will dissolve.

The fact that even poorly soluble drugs can be incorporated into OTFs increases their utility as a drug delivery platform, but OTFs’ chief advantage is that they are highly patient friendly. OTFs have a much larger surface area than other drug delivery methods, which makes for faster wetting, disintegration, and dissolution. No water, chewing, or swallowing is needed to administer films; saliva is sufficient to disperse or diffuse a drug load. OTFs can also be designed to have a pleasant color and flavor, making them more appealing to young children. OTFs can be thought of as a kind of “precision medication,” with perforations in single film that offer both dosing accuracy and flexibility. Dosing flexibility lends itself well to pediatric applications, as children require smaller and more variable dosing than adults, but OTFs may also be attractive to adults who need to take partial doses of medication. Further, those who are receiving medication via OTF will find the films easy to transport and handle.

The final form of OTFs lends them to rapid production, and with the development of powderless, aqueous-based film manufacturing that does not require solvents, manufacturers have the option to produce them around the clock. This process is efficient and takes only two steps of mixing followed by casting, whereas manufacturing tablets and capsules is far more complex. Given their capacity to carry a small load, OTFs are ideal for drugs in development for which production has not yet begun to include large doses. Patent-expiring drugs are also prime candidates to be reformulated for OTF delivery, as the approval of a novel oral film application would entitle these drugs to an additional 3-year period of market exclusivity.

Like any delivery system, OTFs have their own set of limitations. The incorporation of water-insoluble drugs into OTFs is still in its infancy. Tablet and capsules can carry components to help a drug dissolve. In contrast, OTFs are a more streamlined drug delivery system and rely primarily on polymers to increase a drug’s solubility. To expand the capabilities of OTF technology, scientists are exploring promising new particle engineering techniques to find new ways to increase solubility of water-insoluble drugs in OTFs.6-9 Another constraint of OTFs is that they are capable of only carrying a relatively small drug load of about 10 to 20 mgs. Additionally, the larger surface area of an OTF renders it more sensitive to humidity and temperature. Fortunately, special packaging can preserve OTFs in a range of conditions.

Another challenge in OTF manufacturing is testing OTF characteristics. The US Pharmacopeia has not designated any official methods or monographs to test properties, such as mucoadhesion, disintegration, or dissolution. For instance, one reason is that scientists cannot agree on when strips are fully dissolved, the endpoint of some OTF dissolution tests. It is therefore not always straightforward to decide what tests will best assesses a particular OTF product, or how to interpret test results. Unfortunately, it is impossible to draw guidance on optimizing OTF testing from the USP-prescribed disintegration and dissolution tests designed for tablets and capsules. These drug delivery systems vary significantly from OTFs, primarily because of their variance in dosage forms and endpoint determination. However, at Avomeen, we have experience with the development of numerous novel drug delivery systems, including OTFs, and are well versed in tactics to overcome the challenges and unknowns associated with manufacturing these items.10 Our science-based approach systematically selects for OTF components based on their combined chemical properties.

One final testing challenge is that the standard, non-biological methods don’t adequately capture the film’s or drug’s behavior in vivo. Water or biorelevant media used in testing does not perfectly mimic the oral cavity’s saliva and does not accurately simulate the mechanical stress from the tongue and palate. Dissolution testing procedures need to reflect the varied amounts of saliva present in each patient’s mouth. As the ability to incorporate more poorly soluble micro- and nano-particles into OTFs grows, many dissolution tests have been found to be inadequate. While USP IV, which uses a flow-through cell dissolution apparatus, currently has superior discriminating power in this arena, additional methods may further expand our ability to test insoluble drugs carried by OTFs.11

Few companies truly have the capabilities and expertise necessary to develop, test, or deliver OTFs. At Avomeen, however, our experience in developing formulations and navigating regulatory systems that oversee OTF drug development prepares us well to navigate this complex landscape. Whereas many developers employ a shotgun technique that requires slower, trial-and-error manufacturing, our company employs a more efficient, targeted technique to choose the components of an OTF based on their chemical properties.

OTFs are a novel drug delivery system that offers many advantages over more traditional delivery methods like tablets, capsules, and syrups. Market Research Future predicts that the global market for oral thin films will expand significantly from 2018-2023 at a compound annual growth rate (CAGR) of 10.50%.5 For comparison, another source predicts that the global market value of all novel drug delivery systems, including OTFs, will grow at a more modest CAGR of 2.9% over the same time.12

The limitations associated with this method are in large part a result of the newness of OTFs use in drug development. As more drugs are developed or readapted to OTF form, solutions addressing these limitations will naturally arise. Although some factors are static — such as the amount of drug a film can accommodate — we do not think of these as limitations, but rather as attributes that cater preferentially to specific populations of patients. Children and the elderly are prime targets for OTF use. Further research will expand the potential applications for OTFs, enabling this novel drug delivery system to become a standard dosage form for all pharmaceuticals. 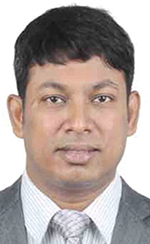 Dr. Srinivasan Shanmugam is Technical Director & Head Formulation R&D & CTM Manufacturing at Avomeen Analytical Services. He has more than 15 years of experience on design and development of conventional, NDDS/alternate advanced/modified drug delivery systems, and platform technologies and has successfully designed, developed, and implemented various platform technologies to enhance oral bioavailability of highly hydrophilic as well as poorly soluble/bioavailable highly lipophilic drugs. Dr. Shanmugam has managed many global product development collaborations with big pharma, has published numerous research articles in prestigious pharmaceutical sciences journals, presented more than 20 of his work in various symposiums/conferences globally, and is a reviewer and editorial member of various journals. He earned his PhD in Pharmaceutical Sciences at Yeungnam University.