Toward the end of 2020, Boehringer Ingelheim launched a drug delivery initiative using Boehringer Ingelheim’s open inno­vation platform, opnMe.com. The objective was to stimulate sci­entific understanding, and development of potential new technologies, for delivery of compounds with challenging solu­bility by offering a set of more contemporary poorly soluble drugs free-of-charge for independent research activities. Success with this pioneering approach was regarded as a potential catalyst for further initiatives on this platform as well as a vehicle to generally encourage similar efforts in pharma/biotech and enhanced in­teractions in areas where improved knowledge and capabilities will accelerate drug product development. The following provides a summary of the initial reaction to this unique offering, including demographics of institutions submitting proposals for considera­tion. It provides insights on the possibilities of such endeavors and how these could facilitate future research using integrated foun­dational learnings coupled to pragmatic implementation to rap­idly translate scientific concepts into drug delivery technologies to overcome challenges posed by new therapies and lead to more patient-centered products.

A novel approach was launched to provide the external drug delivery community with open access to a cohort of novel chem­ical entities designed to engage with contemporary therapeutic targets. The collaboration platform opnMe.com was employed to post a call for scientific proposals addressing the ubiquitous chal­lenge of drug insolubility.

Boehringer Ingelheim launched the opnMe.com open inno­vation portal in 2017 with the release of about 20 molecules Mol­ecules to Order (M2O) that could be requested free of charge with “no IP strings attached.” These were projects fresh from the drug discovery bench, and the intention was to encourage re­search scientists to come forward with novel hypotheses for the molecules presented. Since its launch, more than 30 additional molecules to order have been added, and other opnMe.com for­mats have been initiated, including a Molecule for Collaboration (M4C) program, which was used as the basis for launching a spe­cific call to address a common drug delivery challenge for the pharma industry – poor solubility.

The aim was to create a new way to help scientists to validate their scientific hypotheses and to publish their data to advance scientific knowledge. The launch phase of the drug delivery chal­lenge on opnMe.com was reported previously in this publication (online) in December 2020.1 For the call a simple question was posed: “Presented with a set of novel, late-stage molecules, how would you propose to improve their solubility to generate insights into future drug delivery?” The submission process required a simple two- to three-page summary briefly describing the scope and benefits of the proposal.

This launch phase is now complete, and this latest article de­scribes our experience with creating the concept and a summary of the overall response to the call. Note that for the next stage of the process, successful participants will be provided significant quantities of each drug substance free-of-charge with the possibility to receive addi­tional preclinical data, and/or direct discussion with Boehringer Ingelheim sci­entists, depending on the scope and po­tential of the proposal. Importantly, there is transparency about the rights and obli­gations of those who approach the portal to submit their exclusive ideas, in particular with regard to intellectual property, which remains with the participant. Participants in the program will also be encouraged to publish results of their work in peer-re­viewed journals.

Application of the opnMe.com plat­form was viewed as the most expeditious way to implement this initiative, although there were some potential risks associated with the strategy given the platform was designed to serve Research and not Devel­opment collaborations. Years of experi­ence in drug delivery development, and the challenges therein, led us to believe that an unprecedented offer to supply a set/group of proprietary molecules for study would be of great value to the scien­tific community. Typically, single molecules are supplied for Research applications of opnMe.com that typically are designed to explore target identification opportunities, etc. In comparison, to maximize evalua­tion of drug delivery concepts/technolo­gies, a set of compounds was considered essential for success.

Furthermore, the data set had to be curated to achieve sufficient physicochem­ical and therapeutic diversity (Table 1) with compounds that were no longer in devel­opment and yet still available in sufficient amounts to supply funded proposals. The quantity of compounds supplied also had to be negotiated as Research calls gener­ally require only milligram quantities of material for collaborations supported by opnMe.com. Such quantities were consid­ered inadequate for meaningful drug de­livery research, especially comparative assessment of exciting new drug delivery concepts, so drug substance quantities were increased to gram quantities, with an initial supply of up to 20 g of each com­pound. 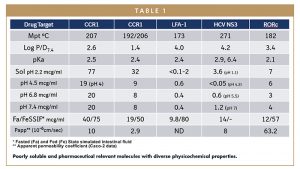 Socializing the opnMe.com call also required a change in approach to enable diverse communication to appropriate communities active in drug delivery. The call was distinguished on opnMe.com by creating an alternative virtual vial presen­tation that represents a container for each of the compounds. This aided in differen­tiation from Research initiatives available on opnMe.com and will likely be the vial image used for further drug delivery/drug development opportunities posted on the platform. Additional communication chan­nels included advertising in key scientific journals, articles in other commercial drug delivery publications, social media (such as LinkedIn, Twitter,) and personal commu­nications. An indication of the interest gen­erated was reflected in the initial article written for Drug Development & Delivery that received more than 864 views.2

The opnMe.com call was open for several months as is usual for any M4C initiative on the platform. Proposals were submitted throughout this period with many responses coming close to the dead­line. At the last count, 74 proposals were received, which reflects a very positive and robust response with high interest in the initiative. The response rate is at the top end of proposal numbers generated by previous M4C opnMe.com initiatives and is regarded as a highly successful call. In­terestingly, the demographics of the pro­posals showed more worldwide interest was stimulated by this drug delivery call than is typically the case. The 74 proposals were received from 29 countries, which re­flects coverage that is some of the most comprehensive to date. Top countries were the US (10), Germany (6), France (5), Japan (5), UK (5), Australia (4), and Italy (4). At the next level were Iran, Pakistan, Poland, and Spain with three proposals each. Two proposals came from China, Finland, Greece, Hungary, and Israel; 13 other countries provided one proposal.

The majority of proposals (61, 82%) were from academic groups, with the rest (13, 18%) coming from drug delivery com­panies. This ratio of academic to commer­cial respondents is also viewed as highly favorable given this is the first time that a drug delivery initiative has been attempted and there are still certain aspects that need to be refined. For instance, in terms of how handling of materials will be addressed by various parties and how initial interactions might lead to additional future collabora­tions beyond mere supply of substances in the current approach. At the time of writing this article, the internal review of all pro­posals was still ongoing according to the predefined time plan. Based on prelimi­nary feedback, Boehringer’s scientific panel has been impressed with the novelty and quality of submitted proposals. Next steps will be initiated with selected propos­als over the course of the next several months.

Drug delivery has a vitally important role to play in converting important new therapies into breakthrough, patient-cen­tered products for the future. The diversity and complexity of these exciting opportu­nities will require intensified scientific en­deavors that transcend the traditional ac­ademic-industry divide. Companies need to be enlightened in their approaches to incentivize fundamental research that can then be jointly developed to translate im­portant new concepts into practical reali­ties. Advancing new delivery technologies deserves special consideration to ensure that new approaches can be made com­mercially viable in a fraction of the time taken in years past. Collaborative innova­tion platforms, such as the drug delivery call on opnMe.com, represent valuable new mechanisms for fostering such for­ward-looking strategies beyond typical consortia approaches that generally only support participation by a limited popula­tion, involve a relatively narrow scope, and have significant associated costs.

The current opnMe.com drug delivery call was a deliberate effort to persuade pharma, academic centers, and technol­ogy development companies to engage in alternative models to incentivize drug de­livery research. The exercise is now enter­ing the implementation phase and more will be learned from experiences running this new model. In the meantime, the ini­tial signs are extremely encouraging in terms of the interest and responses received from around the globe. They highlight vibrancy in the drug delivery community and keen interest to work on contemporary issues with contempo­rary substrate. Based on the positive reception to the concept so far, we are optimistic that mu­tual benefits will be realized and will serve to ad­vance science in more integrated and accelerated ways in forthcoming years. We also anticipate extrapolation from this initial call to additional Development-led opnMe.com calls incorporating emerging therapeutic entities to build a more proactive scientific position for the future, with increased potential for earlier adop­tion and deployment of new drug delivery con­cepts and technologies. Proactively working together through shared materials and shared learnings/technologies will be key to addressing the delivery needs for important therapies and accelerating their translation into breakthrough products for patients.

The authors would like to express their sin­cere thanks and gratitude to: Thomas Triesel­mann, Marc Grundl, Florian Montel (and all other persons supporting opnMe.com), Sven Schreder, Achim Grube, Dan Marino (and DD&D colleagues), Josef Bossart (and Pharma­Circle colleagues), AAPS, and all others involved in supporting this initiative. 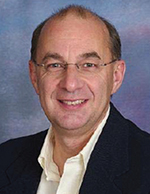 Dr. Keith Horspool is the former Vice President of External Alternative CMC Development (EACD) at BI. EACD operates as a “biotech within pharma” using an integrated network of virtual resources to deliver all CMC requirements for projects, applying alternative development approaches for NCEs and NCE-like new modalities. Prior to joining BI, he worked at Pfizer and Astra Zeneca. He has worked in Pharma for more than 30 years with experience managing preformulation, product development, drug delivery, and materials science. He has diverse experience with a broad range of delivery systems and various routes of delivery, particularly oral, inhalation, and parenteral delivery. 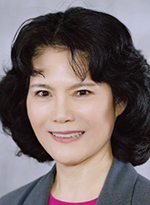 Dr. Shirlynn Chen is a Director of External Alternative CMC Development (EACD) at BI. She has worked over 25 years at BI with broad experience in drug product development, including preformulation, formulation development and scale up, and regulatory CMC submission of various oral dosage forms. Her areas of expertise include physical pharmaceutics, preclinical, and clinical formulation design and development of complex oral dosage forms. She is currently responsible for drug product development in support of the global project portfolio, by applying alternative CMC project strategies for more effective NCE development and for advancement of NCE-like new modalities. 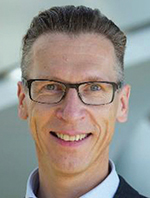 Dr. Markus Koester is a Director of Discovery Research Coordination Germany (DRCG) at BI. He leads the global digital communication and portal activity of BI’s open innovation platform opnMe.com. As such, he was deeply involved in the concept development of the current CMC call. opnMe.com now covers 55 molecules to order and received more than 1,000 orders from 60 countries across the word. In addition, with its two collaboration programs, BI has received more than 1,000 research proposals by now. Prior to joining BI, he worked for Merck KGaA and two biotech start-ups. Overall, he gained more than 20 years of pharma experience in roles ranging from R&D to commercial.