HIV is one of the deadliest pandemics of modern times, having caused 35 million deaths around the world. While researchers and clinical workers have identified antigens and antibodies necessary to validate diagnosis and have developed antiviral drugs to suppress HIV replication, we still do not have an effective means to prevent and fight the infection. Immunological obstacles are a significant barrier to designing an efficient HIV vaccine. In addition, clinical trial failures have demonstrated the need for novel approaches to identify relevant antigens and adjuvants, as well as for better delivery systems. Innovation based on engineered nanoparticles (NPs) can help overcome these obstacles. A team from CEA-Leti recently demonstrated a concept of an HIV vaccine that enhances an adjuvant’s effect, delivered with pinpoint accuracy in the body. This nanoparticulate system is made of bio-assimilable lipids, called LipidotsTM. The following will summarize the immunological obstacles, as well as previous trial failures and explain how the Lipidot technology points the way toward an effective new HIV vaccine.

New HIV vaccine candidates face immunological obstacles, mainly the poor immunogenicity of HIV antigens and the lack of a potent protective immunity, which can be overcome only by introducing innovation in the design of vaccine formulations. Until now, only three prophylactic vaccine candidates have completed the efficacy trials of Phases 2b and 3. The results of these trials were unexpectedly disappointing. AIDSVAX, which was based on the HIV envelope protein gp120 and an alum adjuvant, failed to effectively protect against HIV infection, even though it triggered the production of high levels of autologous neutralizing antibodies in humans. These antibodies bind and neutralize the biological activity of the antigens.1 The subsequent STEP/PHAMBILI trials tested the protective capacity of three injections of adenovirus 5 vector and viral vector, delivering Gag, Pol, and Nef HIV antigens. This strategy resulted in an increased risk of HIV infection in vaccinated individuals with preexisting anti adenovirus immunity.2-4 In addition, the RV144 trial combining AIDSVAX with a canarypox-based recombinant vector reduced HIV acquisition risk only by about 31%.5 This effect is considered insufficient to impact the HIV epidemic, but it significantly helped to unravel the immune-correlates of protection.

Although broadly neutralizing antibodies (bNAb) represent one of the most powerful approaches to control infection and block transmission in non-human primate (NHP) models, no vaccine has yet been produced that can elicit significant and sustained levels of NAbs. In addition, future vaccines should induce cytotoxic CD8+ T-cell responses, to allow clearance of infected cells, while healthy CD4+ T cells orchestrate appropriate immune responses. In this context, antigen delivery systems are key to enhancing immune responses to sub-unit vaccines. In particular, viral particles or virus-like particles (VLPs) are made of self-assembled viral proteins and mimic the morphology of a given pathogen. Furthermore, VLPs have highly conserved structures called pathogen-associated molecular patterns (PAMP) that can stimulate the immune system, but also lead to pathogen-induced inflammation and associated tissue damage. Despite their excellent immune-stimulating properties, the cost of producing VLPs remains the major issue of these antigen delivery systems.

In this context, an alternative to viral particles, synthetic and engineered delivery systems are getting more attention. Their compositions are well known, meaning better control of their safety. Moreover, they are cheaper and simpler to produce in large scale compared to particles of biological origin. They stand out primarily because of their targeting properties: nanoparticles with a diameter below 150 nm are able to both enter lymph vessels where they will ultimately reach lymph nodes, and be internalized by antigen-presenting cells (APCs). Delivering antigens to APCs is a key step in triggering antigen-specific immune responses. This is because of their capacity to initiate the activation of specific T lymphocytes (TL) and to regulate their functions by the secretion of cytokines. Nanoparticle carriers may also prevent antigen proteolytic degradation, allow the co-delivery of antigens and immunostimulants, and allow cross-presentation by dendritic cells (DC). Many different types and sizes of vectors have been explored. In particular, the lipid nanoparticles Lipidots developed by CEA-Leti, are of considerable interest because they fulfill all the aforementioned criteria: they are smaller than 100 nm, they are really stable even in biological media, and they can reach the lymph nodes after their administration where they are taken up by APCs.6 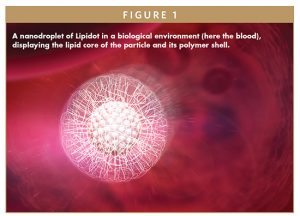 To further promote antigen-associated immune responses, immune-stimulatory molecules can be transported by these types of particulate systems, with the aim of delivering a “danger” signal to APCs in combination with the antigen, for optimal activation of these immune cells. In a recent study, CEA-Leti demonstrated the potential of using Lipidots as a versatile vaccine delivery system for inducing potent immune responses against the HIV-1 p24 antigen, which is recognized as a poor immunogen.7 This antigen was associated with the CpG adjuvant known for its immune-stimulatory properties. To our knowledge, this is the first immunological study using lipid nanoparticles to deliver both p24 and an immunostimulant and reporting a very high induction of T-cell response. Importantly, in mice immunized with a “cocktail of Lipidots,” some particles bearing the p24 antigen and others, the CpG, high levels of antigen-specific antibodies of different subclasses (IgG1, IgG2a, IgA), were measured in the blood. Activation of CD8 T lymphocytes by these lipid-nanocarrier formulations was also highly significant as they are the main effectors of the cytotoxic response needed to clear infected cells.

The impact on the resulting cellular activation demonstrated Lipidots’s value and potential. The combined results showed the advantages of using these nanoparticles to deliver both antigen and immunostimulant, because the combination induced complex and potent immune responses. These effects have also been demonstrated in the model of NHPs, the best animal model for studying HIV. NHPs present an immune system very similar to humans. In terms of perspectives, lipid nanoparticles developed by CEA-Leti can be associated with other rational HIV antigens, such as envelope glycoproteins gp120 or gp41. The goal of such a multi-antigen vaccine formulation is to induce multi-targeted immune responses, namely Env-specific broadly neutralizing antibodies and p24 specific cytotoxic responses, for protection against HIV. 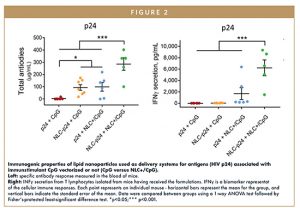 FROM LAB TO PRODUCTION

Lipidots are manufactured using ultrasonication on a millileter scale. A mid-scale production process, including a high-pressure homogenization process and purified by tangential flow filtration in a controlled environment (endotoxin free), was set up in 2016 to translate Lipidots’ potential efficacy to clinical utility. Furthermore, an extensive preclinical characterization was initiated with the development and validation of a large panel of analytical and physico-chemical methods in CEA and in collaboration with the European Nanomedicine Characterisation Laboratory (EUNCL). Currently, after production: 1) the endotoxin contamination level (LAL assay), 2) the size and polydispersivity (batch mode DLS), and 3) the total drug-loading content (HPLC-fluorescence) of each batch are measured. This pre-screening step is followed by the combination of complementary high-resolution techniques, including liquid chromatography (UPLCELSD) or mass spectroscopy. It also includes asymmetric field-flow fractionation coupled to light-scattering detectors and electron transmission microscopy to assess drug loading, physical stability, and chemical stability in simple and complex media.

The Lipidot process is quite stable, and research has proven its efficiency by HPH for the manufacturing of small batches up to 300 ml. To offer full production, CEA-Leti is working with V-Nano, a contract development and manufacturing organization, for manufacturing injectable batches of nano-formulations up to 60 L. To validate the industrial scale up, we need first to manufacture Lipidot batches up to a few liters. CEA-Leti will work with a CEA Tech platform in Labège, France, to develop a new Lipidot scale-up infrastructure, including equipment for manufacturing nanoformulation batches up to 3 L. This new infrastructure will be 100% operational in early 2020 and open to both CEA institutes and V-Nano’s partners.

BEYOND LIPIDS: A DIVERSITY OF NANOMEDICINE APPLICATIONS

The Lipidot technology is one example of the beneficial role that innovative therapeutic and diagnostic opportunities can play in medicine. There is a growing number of R&D projects aiming at developing novel diagnostic and/or therapeutic concepts based on nanotechnology applications, and a growing number of new nanotechnology-based products are reaching the European market. Most of the currently approved nano-enabled products are based on conventional active substances that already have been approved. The relevant platforms may contain a nanoparticle (such as liposome or polymer) with a bound or encapsulated active substance or may be formed directly from the constituent drug in a nano form. The remainder of investigational nanomedicines demonstrates a trend toward agents using micelles, as well as the introduction of formulations using dendrimers. Among the approved products on the market, the main nanotechnology platforms include: nanocrystals, polymer-protein conjugates, amino-acid based polymers, biodegradable polymers, nano-emulsions, liposomes, iron-carbohydrate complexes in a colloidal suspension, and virosomes.

In all cases, the main advantages are related to the improved pharmacokinetic (PK) properties, such as:

These properties help boost efficacy while reducing the dosage and limiting the risk of side effects.

To go further in the design of innovative vaccine formulations, we have to apply our concept of delivering vaccine components by using Lipidot technology with a range of antigens. In particular, in the context of HIV, we have to consider HIV antigens from the viral envelope and the capsid to elicit broadly neutralizing antibodies, as well as potent cellular response (CD8+ T cells). The correlate of protection must be demonstrated in relevant animal models before entering the early phases of human clinical trials. In parallel to this clinical translation, we are addressing the industrialization phase of our particles by developing and transferring our manufacturing processes at the large scale to industrial partners for the production of controlled clinical batches made in GMP conditions. In addition, we anticipate writing a clinical development plan with the help of experts in the field to speed up the clinical validation and approval by regulatory agencies. 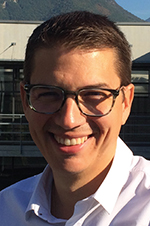 Dr. Fabrice Navarro began his career in nanomedicine at CEA in a postdoctoral position at CEA Tech, where he worked on in vivo imaging using lipid nanoparticles. He joined CEA-Leti as a researcher, working on various nanomedicine projects as principal investigator, and leading a small research group. In 2016, he was named head of a lab working on the design and validation of new diagnostic tools or therapeutic strategies using micro- and nanotechnologies. Dr. Navarro also heads CEA Tech’s microfluidic systems and bioengineering lab (~ 30 scientists). With more than 10 patents, he is co-author of more than 35 publications and more than 30 reviewed proceedings. He earned his PhD in Molecular and Cell Biology, Physiology and Neurosciences in 2006 from the University Claude Bernard of Lyon, on the study of molecular and cellular mechanisms of neuro inflammation in pathogenesis of epilepsy.