More than 30 years have passed since the initial development of oligonucleotide drugs; however, only eight drugs have been approved thus far. This is partially due to issues related to oligonucleotide delivery methods. We believe there is a novel delivery platform with the potential to resolve several of these complications. The following introduces NapaJen Pharma’s technology with a specific focus on solving some of the current challenges of oligonucleotide therapeutics. Furthermore, we outline the particular value of our company’s unique ideas and systems and briefly describe its future direction.

Our technology relies on forming complexes between oligonucleotide drugs and β-glucan schizophyllan (SPG) molecules, and then selectively delivering these compounds to dendritic cells and macrophages expressing Dectin-1, a specific receptor for SPG. Dectin-1 receptor is predominantly expressed on the surface of monocyte/macrophage and neutrophil cell lineages.1 However, we have not confirmed Dectin-1 on neutrophils as functional delivery gate for oligonucleotide/SPG complex. Dectin-1 receptor belongs to the C-type lectin receptor family, and recognizes β-1,3 glucan; meanwhile, SPG consists of a triple helix with β-1,3 glucan chains, and is produced by Schizophyllum commune. 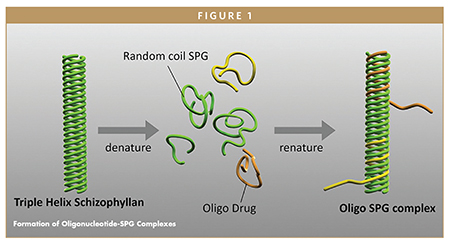 As shown in Figure 1, when SPG is exposed to alkaline environments, it denatures into separate β1,3-glucan chains. Surprisingly, after neutralization, it renatures to its original conformation. The key feature of the technology is that when neutralization occurs in the presence of polydeoxy-adenine (poly dA), a new complex is formed between two β1,3-glucan chains and one DNA strand. 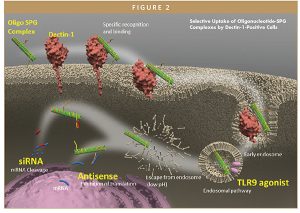 Details regarding how Kazuo Sakurai, Co-founder and Chief Science Officer of NapaJen Pharma, discovered this unique idea and brought this technology to fruition are not provided here owing to word count limits; however, it can be found by reviewing Dr. Sakurai’s supplemental publication on this topic.7

THE PITFALLS OF OLIGONUCLEOTIDE DRUG TECHNOLOGY

We believe it was 2006, the year in which Dr. Craig C. Mello won the Nobel prize for discovering RNAi, when one of the authors of this article participated in a roundtable discussion with Dr. Mello at the IBC conference held in Boston. Since then, oligonucleotide drug delivery has overcome several obstacles, but selective delivery to target cells remains a major concern. Additionally, several secondary complications hinder the development of oligonucleotide drugs, including 1) localized drug delivery, 2) high dosage required for therapeutic effect, 3) poor safety profile, and 4) high cost of goods (COGs)/Annual drug cost.

The profiles of human embryonic kidney (HEK) cells not expressing, and those expressing Dectin-1 via transduction (dHEK), were compared in the presence of fluorescence-labeled oligonucleotide-SPG complexes. Transduced dHEK cells exhibited strong fluorescence, as opposed to HEK cells.

Human peripheral blood mononuclear cells (PBMCs) were cultured with different concentrations of fluorescent-tagged NJA-730 (a complex formed between CD40-targeted oligonucleotide and SPG). Fluorescence-activated cell sorting (FACS) analysis showed that the fluorescence-positive fraction corresponding to Dectin-1-positive cells, and the degree of fluorescence were dependent on the concentration of NJA-730.

In a mouse model of allogenic heart transplantation, IV injection of NJA-312, a mouse homologue of NJA-730, increased the lifespan of the grafted donor heart by more than 100 days.8 Moreover, a random amplification of cDNA end (RACE) assay was conducted on CD40 mRNA (the target of NJA-730), which was harvested from cynomolgus monkey PBMCs following IV administration of NJA-730. This assay showed the expected band corresponding to cleaved CD40 mRNA, suggesting that systemic IV administration of NJA-730 was effective in primates. In the current clinical Phase 1 trial of NJA-730, an analog RACE assay will be conducted soon. A successful result with this assay would validate NJA-730 itself, and also confirm the proof of mechanism (POM) of NapaJen’s targeted delivery technology.

Following repeated toxicity testing of NJA-730 in monkeys over a 4-week period, no significant adverse effects were observed. Additionally, in the clinical Phase 1 trial that evaluates the safety profile of NJA-730, which is a single ascending dose (SAD) study in progress, no concerning events have been reported; hence, the trial has progressed toward testing multiple ascending dose (MAD) study of NJA-730.

The annual costs of the currently available oligonucleotide drugs OnpattroTM and SpinrazaTM are quite high. OnpattroTM and SpinrazaTM reached $450,000 and $750,000, respectively, in the first year, and $375,000 for SpinrazaTM in the subsequent years.9,10 At present, as the frequency of NJA-730 administration and the yearly drug manufacturing costs have not been determined, we are not including a direct cost comparison in this article. However, based on the value propositions of NapaJen technology previously outlined, there is a high probability that drug manufacturing would be less expensive in comparison to the aforementioned ones. For this reason, we hope that oligonucleotide drug technology, which has until now been restricted to the treatment of rare diseases and a subset of cancers due to high costs, becomes widely available for the treatment of non-orphan diseases.

A Phase 2 trial testing NJA-730 for acute graft versus host disease (GvHD) will start in 2020, and demonstration of proof-of-concept is expected to be achieved by the fourth quarter of 2021. The aforementioned POM is anticipated to be confirmed in a Phase 1 Extension study. Due to suppression of CD40, an important accessory molecule for antigen recognition, NJA-730 may be applicable for treating other indications, such as organ transplantation, inflammatory bowel diseases, psoriasis, and other autoimmune diseases, in addition to acute GvHD. We hope to continue our studies toward that aim, both independently and in collaboration with other companies. In addition, we are currently discussing partnerships with pharmaceutical and biotechnology companies, including a joint study with a Big Japanese pharma company that commenced in February 2019. Through these partnerships, we hope to develop numerous drug candidates, and ultimately use our oligonucleotide drug technology to provide novel treatment options to patients suffering from various diseases.

More than 30 years have passed since the initial development of oligonucleotide drugs; however, only eight drugs have been approved thus far because of several issues of oligonucleotide drugs. We believe NapaJen Pharma could offer technologies with the potential to resolve several of these complications. Our technology relies on forming complexes between oligonucleotide drugs and β-glucan schizophyllan SPG, and then selectively delivering these compounds to dendritic cells and macrophages expressing Dectin-1, a specific receptor for SPG. Value proposition added by NapaJen Pharma could be 1) selective delivery of oligonucleotide-SPG complexes to Dectin-1-expressing cells, 2) effectiveness by systemic administration, 3) efficacy with low doses, 4) high safety profile, and 5) low COGs/annual drug cost. These advantages will be further confirmed by upcoming clinical studies. A Phase 2 trial testing NJA-730, a complex formed between CD40-targeted oligonucleotide and SPG, for acute GvHD will commence in 2020, and demonstration of proof-of-concept is expected to be achieved by the fourth quarter of 2021. The aforementioned POM is anticipated to be confirmed in a Phase 1 Extension study. In addition, we are currently discussing partnerships with pharmaceutical and biotechnology companies, including a joint study with a Big Japanese pharma company that commenced in February 2019. Through these partnerships, we hope to develop numerous drug candidates, and ultimately use our oligonucleotide drug technology to provide novel treatment options to patients suffering from various diseases. 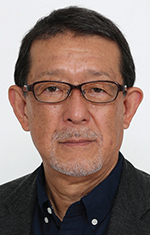 Dr. Kenji Arima has been in the pharmaceutical arena for more than 40 years. Most recently, he joined NapaJen Pharma as the Chief Development Officer, and became CEO in August 2019. He successfully led the NJA-730 project to the clinical stage from the research stage in a short period of time. Prior to NapaJen, he was with the Japan Agency for Medical Research and Development (AMED) from 2014 to 2016. At AMED, he proposed and established DISC (Drug Discovery Innovation and Screening Consortium), an innovative collaboration system between academia and pharmaceutical industry, where DISC makes possible for academia to use the high-throughput chemical library with 200,000 compounds collected from the industry. He worked in Suntory and then Asubio Pharmaceuticals for 35 years holding various positions, including the President of the US subsidiaries of both Suntory and Asubio Pharmaceuticals for 11 years. While at the US subsidiaries, he also contributed to the pharmaceutical industry as the President of New York Pharma Forum in 2010, whose members are major US and Japanese pharmaceutical companies, and the President of US and Japan Healthcare study team with over 40 US-based Japanese healthcare companies between 2004 and 2007. He can be reached at k.arima@napajen.com. 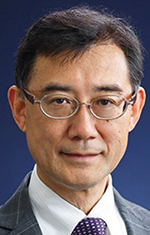 Dr. Akihiko Watanabe is Vice President of Research Innovations and Business Development of NapaJen Pharma. He earned his PhD in Immunopharmacology from Gifu Pharmaceutical University, Japan. He held a wide range of roles for more than 30 years in research leadership, top management secretary, marketing, and business development in Japanese organizations as well as in global pharmaceutical companies like Kyowa Hakko Kirin, Teva, Bayer, and Toyobo. Earlier in his career, he was responsible for drug discovery research mainly in immunology, in addition to oncology and CNS areas. Most recently, he contributed to in-licensing, seed finance evaluation, and out-licensing in scientific diligence and business development roles. He has also served on the editorial board of the official journal of The Pharmaceutical Society of Japan. He also showed leadership in pharmaceutical organizations, such as Human Science Foundation and Pharmaceutical Industry Forum. He can be reached at a.watanabe@napajen.com.